Emmanuel Macron has told Ukraine to negotiate with Vladimir Putin in order to bring about an end to the war.

The French president arrived in Romania yesterday for a three-day trip to Ukraine’s eastern neighbours including Moldova, before possibly heading to Kyiv on Thursday on a visit with leaders from Germany, Italy and Romania.

‘The Ukrainian President and his officials will have to negotiate with Russia,’ he said today. 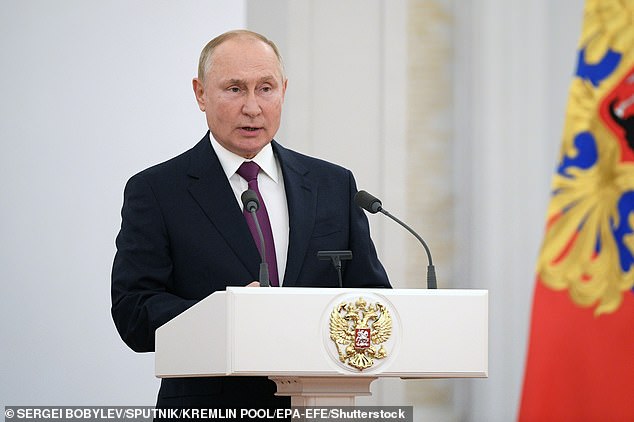 The French leader has been criticised by Ukraine and eastern European allies for what they perceive as his ambiguous backing for Ukraine in the war against Russia.

But French officials have in recent days sought to strengthen the public messaging, while Macron appeared to take a tougher line with his troops.

‘We will do everything to stop Russia’s war forces, to help the Ukrainians and their army and continue to negotiate,’ he told French and NATO troops at a military base in Romania.

Last week, Macron caused outrage when he said Russia should be treated fairly in a negotiation process.

He said: ‘We must not humiliate Russia so that the day when the fighting stops we can build an exit ramp through diplomatic means. 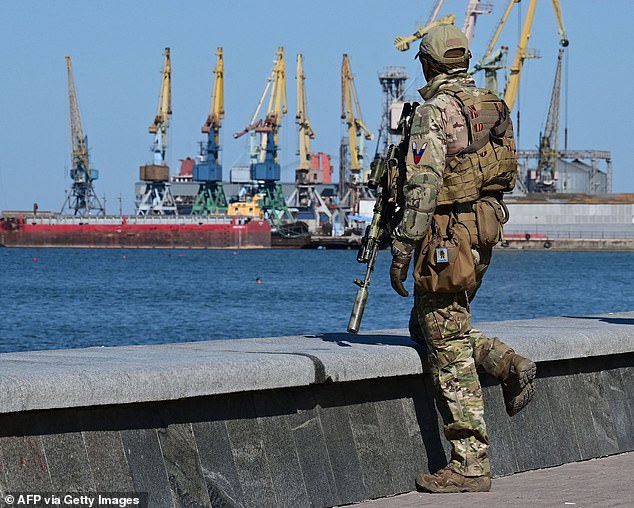 A Russian serviceman patrols on the promenade in Berdyansk, amid the ongoing Russian military action in Ukraine

‘I am convinced that it is France’s role to be a mediating power.’

Macron has sought to maintain a dialogue with Russian President Vladimir Putin since Moscow’s invasion of Ukraine in February.

His stance has been repeatedly criticised by some eastern and Baltic partners in Europe, as they see it as undermining efforts to push Putin to the negotiating table.

Macron has spoken with Putin regularly since the invasion as part of efforts to achieve a ceasefire and begin a credible negotiation between Kyiv and Moscow, although he has had no tangible success to show for it.

His symbolic visit to Kyiv would come a day before the European Commission makes a recommendation on Ukraine’s status as an EU candidate.

The biggest European nations have been lukewarm about Ukraine’s membership and are set to discuss at a leaders’ summit on June 23-24. 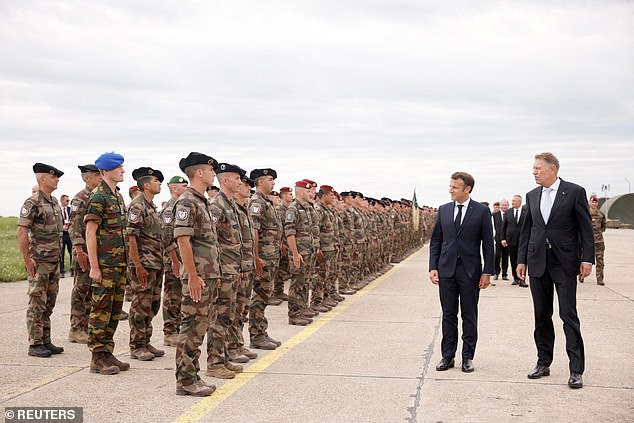 ‘We are at a point when we (Europeans) need to send clear political signals, us Europeans, towards Ukraine and its people when it is resisting heroically,’ Macron said, without giving details.

France leads a NATO battle group in Romania of about 800 troops, including 500 French troops alongside others from the Netherlands and Belgium. Paris has also deployed a surface-to air missile system.

Macron heads to Moldova later on Wednesday to support a country many fear could be drawn into the conflict in neighbouring Ukraine.

The focus may turn to Kyiv on Thursday, with diplomatic sources saying the European leaders may head to Ukraine’s capital.

Macron declined to comment on ‘logistical matters’, but said it was important to hold new talks with Ukraine on military, financial matters and issues related to exporting grains from the country.

‘In my opinion, the candidate status must be granted as soon as possible, it is a correct solution from a moral, economic and security perspective,’ Iohannis said, adding that there were efforts to find a feasible solution to differences among European powers.