Macron warns Britain will be FORCED into the ‘backstop’ over fishing

French President Emmanuel Macron has vowed to force Britain into the Irish border backstop if it does not give up access to UK fishing waters.

Mr Macron said maintaining the customs union would be used as ‘leverage’ in the next phase of talks on the final UK-EU trade deal.

Prime Minister Theresa May has insisted Britain will leave the customs union, which is essential to striking trade deals, after Brexit.

But under the divorce deal agreed in Brussels today this can only happen if there is an alternative for keeping open the Irish border.

If France refuses to agree a trade deal because of a dispute over fishing, entering the backstop – which is hated by Brexiteers, Unionists and the DUP – could be inevitable.

At a press conference in Brussels today, Mr Macron said: ‘An agreement assumes that each side promotes its position.

‘We as 27 have a clear position on fair competition, on fish, on the subject of the EU’s regulatory autonomy, and that forms part of our lines for the future relationship talks, which is a lever, because it is in our mutual interest to have this future relationship.

‘I can’t imagine that the desire of Theresa May or her supporters is to remain for the long term in a customs union, but to define a proper future relationship which resolves this problem.’

He added: ‘It is leverage because it is important as to our future relationship and I do not understand that Mrs May and those who support her very much wanted to stay in the Customs Union, they would rather favour new rules.’ ‘

A joint EU statement set out how fisheries was a ‘priority’ in the next phase of talks.

It said: ‘A fisheries agreement is a priority issue, and should be based on principles of reciprocal access and existing quotas.’

A future fisheries agreement ‘must be concluded well before the end of the transition period’ after Brexit, which should last until the end of 2020 but may be extended for up to two years, the statement said. 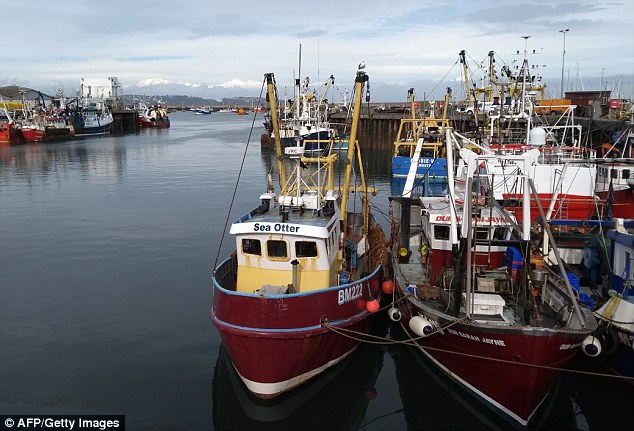 British fishermen (including at Brixham Harbour, pictured) have been promised UK control of fishing waters after Brexit

‘For us access to British waters is a priority,’ said a source close to French President Emmanuel Macron.

The divorce agreement approved by EU leaders on Sunday assures that European fishermen will retain access to British territorial waters during the transition period.

During the transition, Britain will continue to apply EU rules and contribute to its budget, but without participating in its decision-making.