Macron warns of anti-Semtism and the country’s own Kristallnacht

France’s prime minister referred to a new ‘Night of Broken Glass’ across France as he announced that anti-Semitic acts were up by 69 per cent this year.

Edouard Philippe made the claim on the 80th anniversary of the November 1938 pogroms in Germany when Nazis attacked Jewish businesses and synagogues.

‘Every aggression perpetrated against one of our fellow citizens because he is Jewish sounds like a new breakage of glass,’ Mr Philippe said in a Facebook post.

French president Emmanuel Macron visits the ‘Ring of Memory’ WWI memorial in northern France, as he caused outrage this week by claiming Vichy France leader and Nazi collaborator Philippe Pétain had been a WWI hero 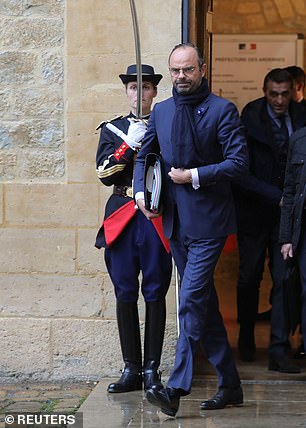 While Mr Philippe did not point to particular acts of physical violence, he made it clear that online hate crimes and related offences went up significantly this year.

Referring specifically to Kristallnacht – the Night of Broken Glass – Mr Philippe said: ‘Why remember, in 2018, such a painful memory?

‘Because we are very far from having finished with anti-Semitism. While [anti-Semitism] has been declining for two years, the number of these acts has increased by more than 69% in the first nine months of 2018.’

Kristallnacht took place in November 1938 and involved the targeting of Jewish businesses and synagogues by Nazi paramilitaries and civilians.

It was the ‘Night of Broken Glass,’ as Jewish shop windows were smashed and synagogues were torched.

Mr Philippe said that in relation to anti-Semitism he would ‘let nothing pass’, and that new measures included a clampdown on cyber hate crime.

A modification of the law will strengthen the fight against online anti-Semitism, while a new Ministry of Education team will fight against Jewish hate in schools.

Mr Philippe’s government is also experimenting with ‘a network of investigators and magistrates specifically trained in the fight against hate crimes.’

These will target all forms of discrimination, including hate acts aimed at other vulnerable religious communities including Muslims.

Anti-Semitic acts fell by 50 per cent in 2016, according to government figures, and then by a further seven per in 2017.

But more than 500 complaints have already been reported in 2018, accounting for the 69 per cent rise. 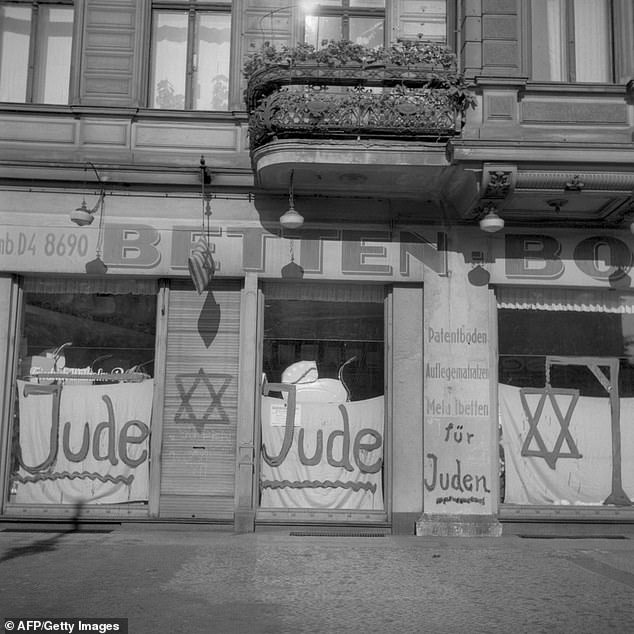 ‘Kristallnacht’, or the night of broken glass, was an attack on Jewish businesses and synagogues carried out by Nazi paramilitaries and civilians in November 1938

Many are related to Israel, with French Jews frequently complaining that they frequently suffer prejudice because of their links with the Middle Eastern country and its conflict with Palestine.

France has a long history of anti-Semitism behind it, and many say that it remains institutionally racist.

President Emmanuel Macron caused outrage this week by referring to the Nazi collaborator Marshall Philippe Petain as a ‘great soldier’.

Petain led French forces to victory during World War I, but then ran the pro-German Vichy regime, allowing thousands of Jews to be entrained to concentration camps where they were murdered.

Petain is still revered, including by some members of the historically notoriously anti-Semitic National Rally (NR) party.

The NR – which used to be called the National Front – is led by Marine Le Pen, and has seen a surge of support since she came runner-up to become head of state in 2017.