The threat of high winds could force police to lower or even remove the famed character balloons from this year’s Macy’s Thanksgiving Day Parade.

The NYPD will deploy seven anemometers measuring wind speed along the parade route in Manhattan on Thursday, and says that the balloons will be lowered in wind gusts of 23mph and grounded at 34mph.

Current forecasts predict wind gusts of up to 30mph, as well as frigid temperatures in the low 20s.

‘If we have to call an audible on the day of, and make an adjustment, we’ll do so,’ Chief of Patrol Rodney Harrison said at a Wednesday press conference. ‘Thirty-four mile per hour wind gusts is when we say, ‘OK, we gotta bring it all the way down to the ground.”

Police are closely monitoring wind speeds to determine whether to ground balloons for the Macy’s Thanksgiving Day parade. Olaf from Frozen (above last year) is returning this year 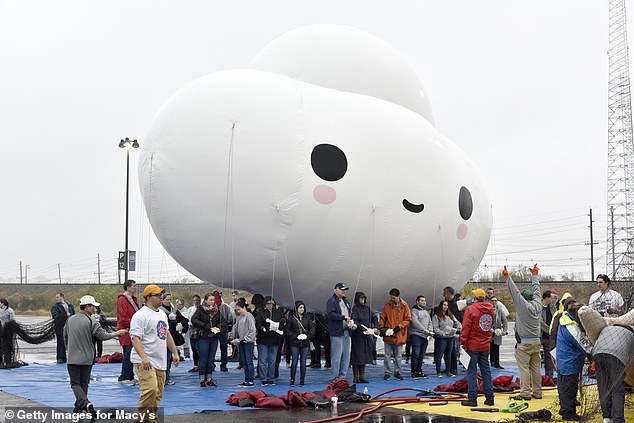 New balloon Little Cloud by Friendswithyou is seen in a test flight earlier this month. Every balloon has a matrix that determines how high it can fly in a given wind speed 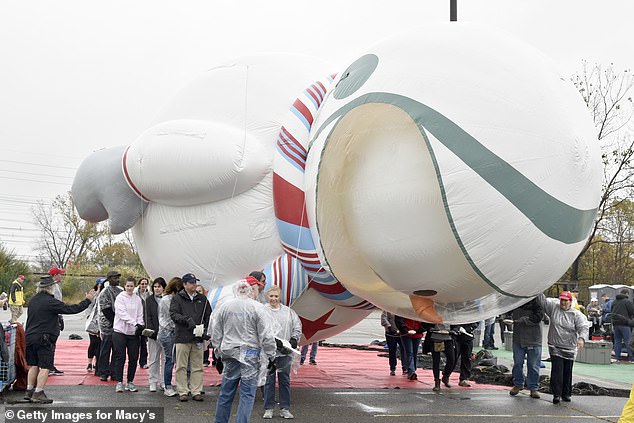 Another new balloon for 2018, Sunny the Snowpal, is seen during testing. Police supervisors will be monitoring the wind speeds at seven points along the parade route 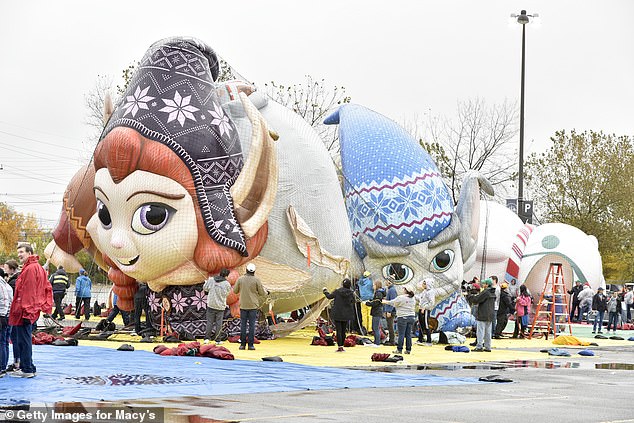 Other new balloons this year include Fleck, Bjorn, JoJo and Hugg, four elves from the Netflix film The Christmas Chronicles. They are see above during testing

Harrison explained that each balloon has a matrix that determines how high it can fly depending on the wind speed.

A police supervisor assigned to each balloon will determine if it needs to be lowered.

If winds gust high enough, some or all of the balloons might be removed from the route.

The parade has been held annually since 1924, and has featured large balloons since 1931. 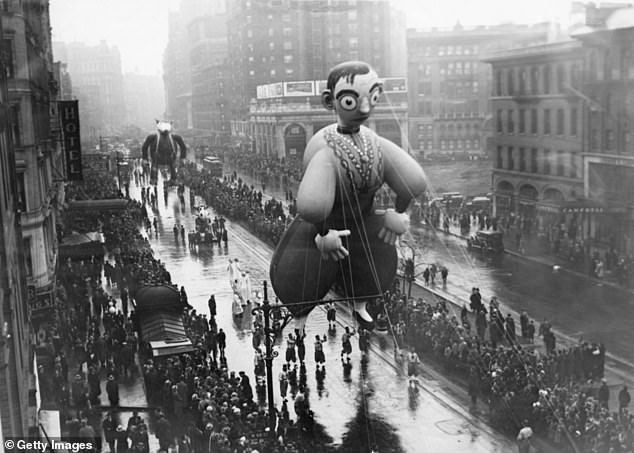 Early versions of the character balloons are seen at the 1934 parade. The parade has been held annually since 1924, and has featured large balloons since 1931 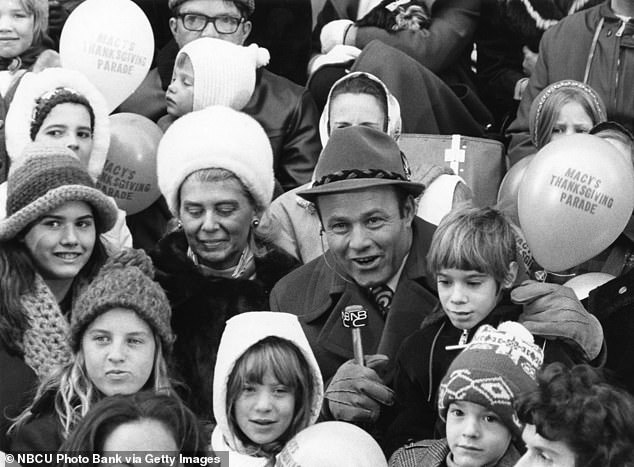 Spectators are seen at the 1971 parade, widely considered to be the worst ever after high winds forced organizers to remove all the balloons from the festivities

High winds have forced the balloons to be removed from the route just once, in 1971, when winds gusted up to 45 miles per hour.

1956: High winds cause Mighty Mouse balloon to crash and deflate in Columbus Circle

1971: All balloons are removed from the parade due to high winds gusting at 45mph

1993: Sonic the Hedgehog balloon crashes into a lamp post at Columbus Circle in wind gusts, injuring a child and an off-duty police officer

1997: Cat In The Hat balloon goes out of control, hitting a street lamp and putting a woman in a coma. Police also had to ground and deflate several other balloons that went wild

In 1997, high winds forced the character balloons to be carried very close to the ground, limiting the view of spectators.

Even still, disaster struck. The winds pushed the Cat In The Hat balloon into a lamp post at 36th Street.

Falling debris fractured a woman’s skull, leaving her in a coma for a month.

Elsewhere on the 1997 parade route, Barney The Purple Dinosaur went rogue, weaving erratically over the crowd and striking a lamp post, ripping a hole in the balloon.

Police rushed in and helped handlers bring the half-inflated and out of control balloon down to the pavement.

Injuries also occurred at the parade in 1993 and 2005, both times when balloons struck lamp posts or street lights. 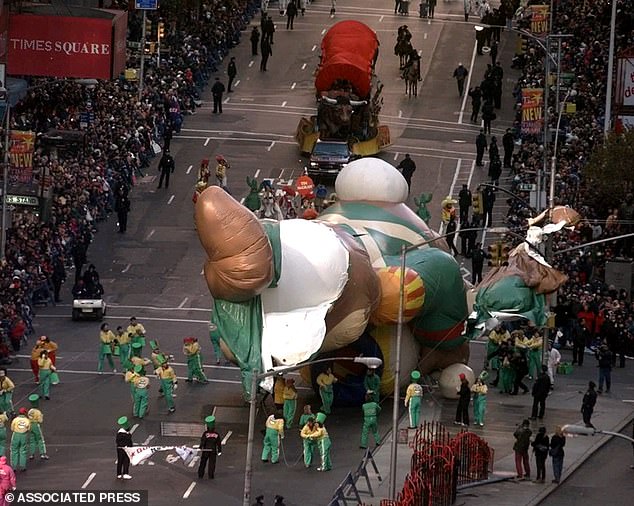 In 1997, handlers struggled with a balloon in high winds while passing through New York’s Times Square during the Macy’s 71st Thanksgiving Day Parade 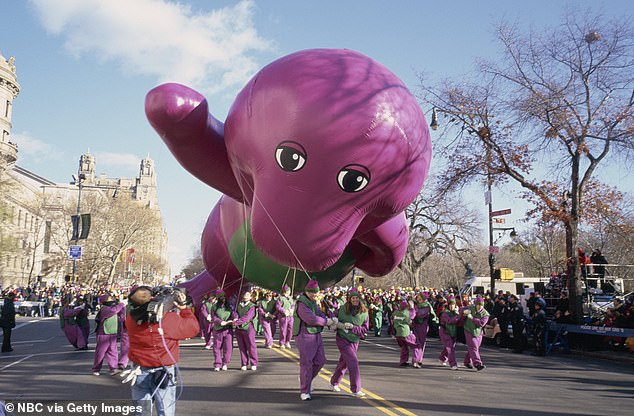 High winds in 1997 forced handlers to fly the Barney balloon just a few feet above the ground. But the precautions were not enough to avoid disaster

This year’s parade will begin at 9am at Central Park West and 77th Street, and end at noon with the arrival of Santa Clause at the Macy’s flagship store on 34th street.

New balloons being introduced this year include Fleck, Bjorn, JoJo and Hugg, four elves from the Netflix film The Christmas Chronicles.

Goku from Dragon Ball will also debut this year.

The parade will be televised nationally on NBC.

Police warn spectators who plan to attend that no large backpacks, lawn chairs, umbrellas, large coolers or alcoholic beverages will be allowed.

Security measures will be extremely tight, and spectators along the parade route will have to pass through checkpoints with metal detector wands.