A cow has tested positive for mad cow disease in Florida, the US Department of Agriculture (USDA) announced on Wednesday.

The animal had belonged to Florida livestock ranchers and intended to be slaughtered and sold for consumption.

If humans consume mad cow-contaminated beef, there is a risk of developing prion disease, a degenerative brain disorder that can quickly disable or kill its victims.

This is only the sixth time the disease has been found in the US in the last 15 years, and the USDA assures Americans that the infected cow was disposed of before it could have contaminated any of the slaughter equipment or other animals. 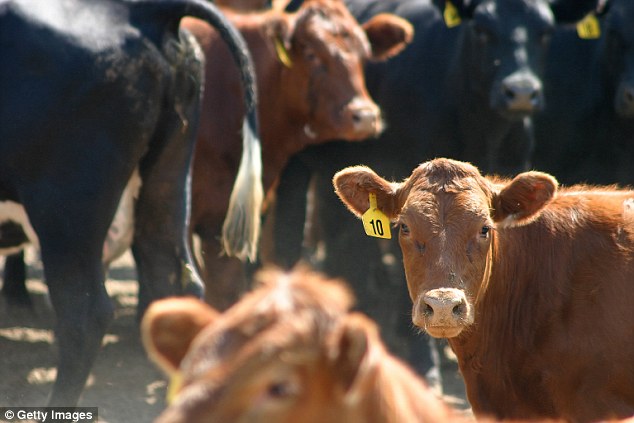 The USDA found confirmed that one animal from Florida had mad cow disease, but says that the brain wasting disease has not spread to humans (file image)

The animal tested positive for atypical H-type BSE on August 26 as part of routine surveillance of cattle that are found to be unfit for slaughter, the agency said.

It ‘never entered slaughter channels and at no time presented a risk to the food supply, or to human health in the United States,’ the agency said in a statement.

USDA Animal and Plant Health Inspection Service and Florida veterinary officials are continuing to look into the case. Officials with Florida Department of Agriculture and Consumer Services could not be immediately reached for comment.

Atypical BSE occurs rarely and spontaneously in cattle, so there is no association with contaminated feed or ingestion of infected materials, said APHIS spokeswoman Lyndsay Cole.

There are two forms of BSE: atypical and classic.

First detected in Britain in the 1980s, classic BSE ravaged herds in parts of Europe until the early 2000s and was linked to the brain-wasting Creutzfeldt-Jakob disease in humans.

The disease occurs spontaneously in animals. It is suspected that the disease is triggered by some sort of infection – but it doesn’t appear to be viral or bacterial and remains mysterious to scientists.

Once ‘infected,’ a cow’s brain develops tiny holes that interrupt nervous system communication such that the animal loses control of its cognitive and motor functions.

The result is the appearance of ‘mad’ erratic behavior.

Its neural material – including the brain and spinal cord – can only ‘infect’ other animals or humans that eat it.

But according to the US FDA, the parts of cattle that we don’t eat are re-purposed in a number of ways – including to make feed for other cows.

If a human eats beef that contains nervous system material from a mad cow, it can cause a similar prion disorder called Creutzfeldt-Jakob disease.

In 1997, a ban was instituted on the use of cattle feed containing brain or spinal tissue, which can result in transmission of the disease.

Of the five previous U.S. cases, the first – in Washington state in 2003 – was a case of classical BSE from a cow imported from Canada.