Australian track and field star Maddy de Rozario has ended her long wait for a Paralympic gold medal with a dominating performance in the T53 800m.

The four-time Paralympian and three-time Games silver medallist took the lead just after 400m in Sunday night’s final at the Olympic Stadium and pulled clear for a convincing win.

Maddy de Rozario has won gold in Tokyo, breaking a Paralympic record in the T53 800m

The world record holder and reigning world champion, who was recognised with a Barbie doll last year, beat China’s Zhou Hongzhuan by 1.67 seconds, with Swiss Catherine Debrunner taking the bronze.

‘They (Ballard and Sauvage) are two women who have been there every single point of my career, but also of my life,’ de Rozario told the Seven Network.

‘I wouldn’t have wanted to do it without them here.’ 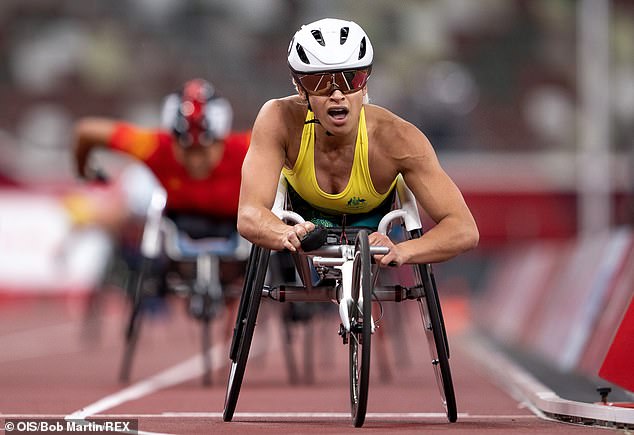 She will next race the 1T54 500 on Monday and then the T54 marathon next Sunday on the last day of the Games.

Also on Sunday night, swimmer Jake Michel had a near-perfect Games debut when he was narrowly beaten in the final of the SB14 100m breaststroke.

Japan’s Naohide Yamaguchi broke his own world record to win in 1:03.77 and Michel was 0.51 of a second behind for the silver medal.

But the Steelers’ campaign for a third straight Paralympics gold medal ended in disaster with a 60-52 torching from Japan in their bronze medal game – the first time they have missed out on the medals since 2004. 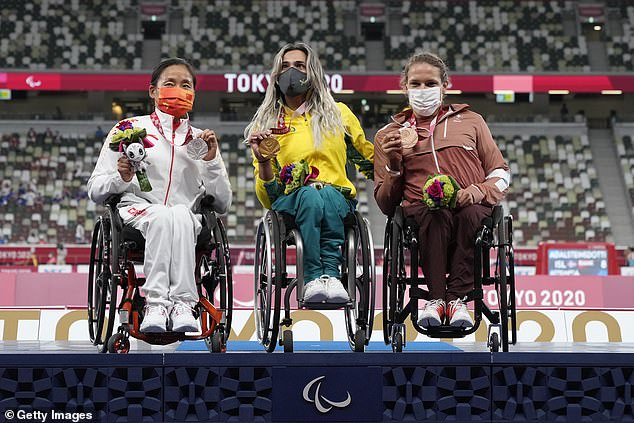 Earlier on Sunday, Lauren Parker lost her PTWC triathlon by just 0.01 of a second for the silver medal, with American Kendall Gretsch overtaking the Australian within metres of the finish

Erik Horrie won his third Paralympics silver medal in the single sculls, making history as the first rower to win three medals at the Games.

In the earlier session at the track and field, 45-year-old grandmother Sarah Edmiston took bronze in the F64 discus.

The Rollers’ unbeaten start to the Games ended on Sunday when the United States thumped them 66-38 in wheelchair basketball.