Made in Britain: The cars, tractors, planes, submarines and dolls churned out by UK

Britain’s heritage is celebrated in a new photobook which captures how much the country’s industry has changed over the last century.

Patrick Potter’s Made in Britain: A Photographic History of Britain at Work provides an insight into the country’s manufacturing legacy.

Pictures from across the last century include wartime workers next to Hawker Typhoon fighter planes in 1944, stacks of music records at the height of Beatlemania and the unmistakable shape of a Concorde taking flight in 1970.

Other images show a large ship looming over children playing in the street in the north east and steel workers going about their business under a shower of sparks.

Going hungry: This picture, taken in Sunderland, 1908, shows children of the unemployed waiting for free dinners during a depression in the ship-building trade. The industry suffered three great depressions – the second taking place from 1908 to 1910 after a nationwide fall in ship production 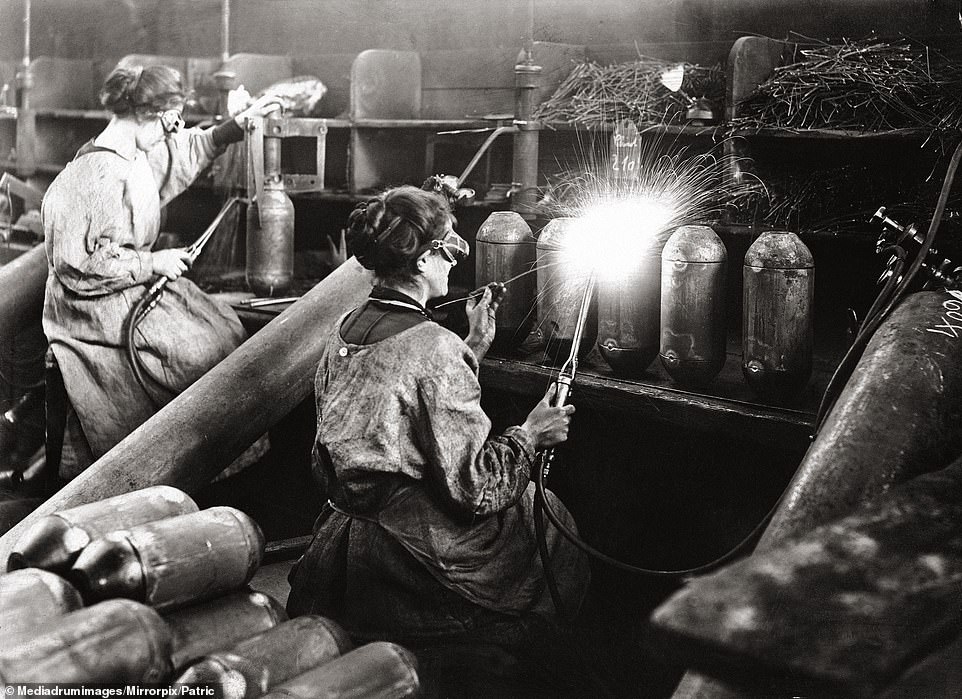 War: Female bomb-makers are pictured here at a munitions factory in 1916, making shells to be used in the Great War. January 1916 saw conscription introduced in Britain, and Field Marshal Lord Kitchener, the British Secretary of State for War, requested US military participation in Europe 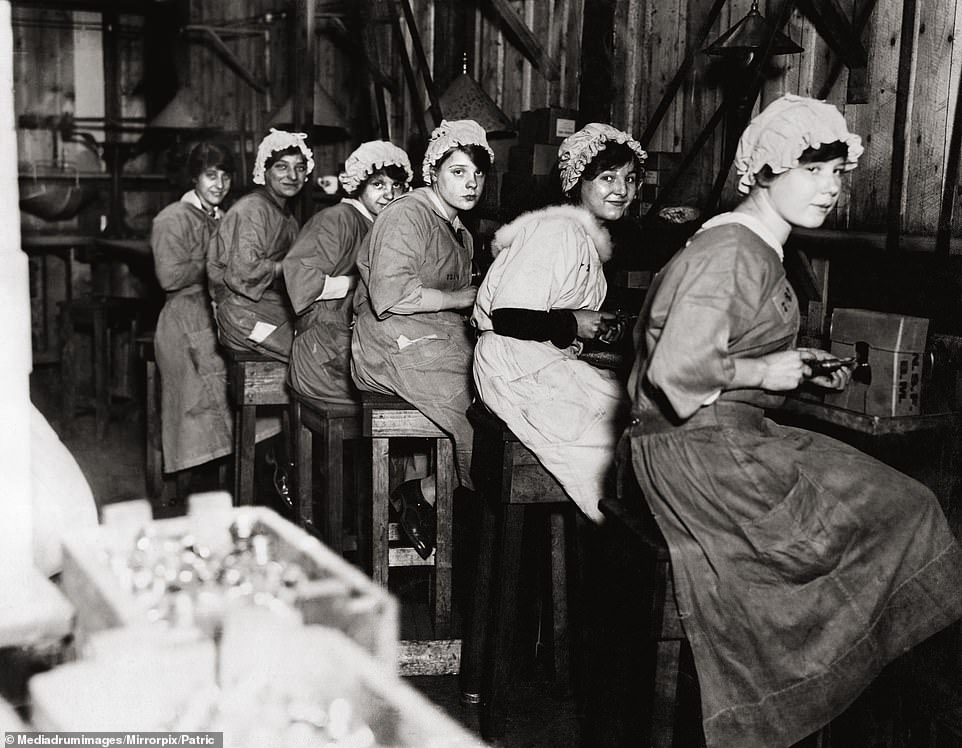 These young women, pictured in 1918, are making ammunition for troops as the Great War neared its conclusion. November 11 that year would see the end of the First World War – one of the bloodiest conflicts in history 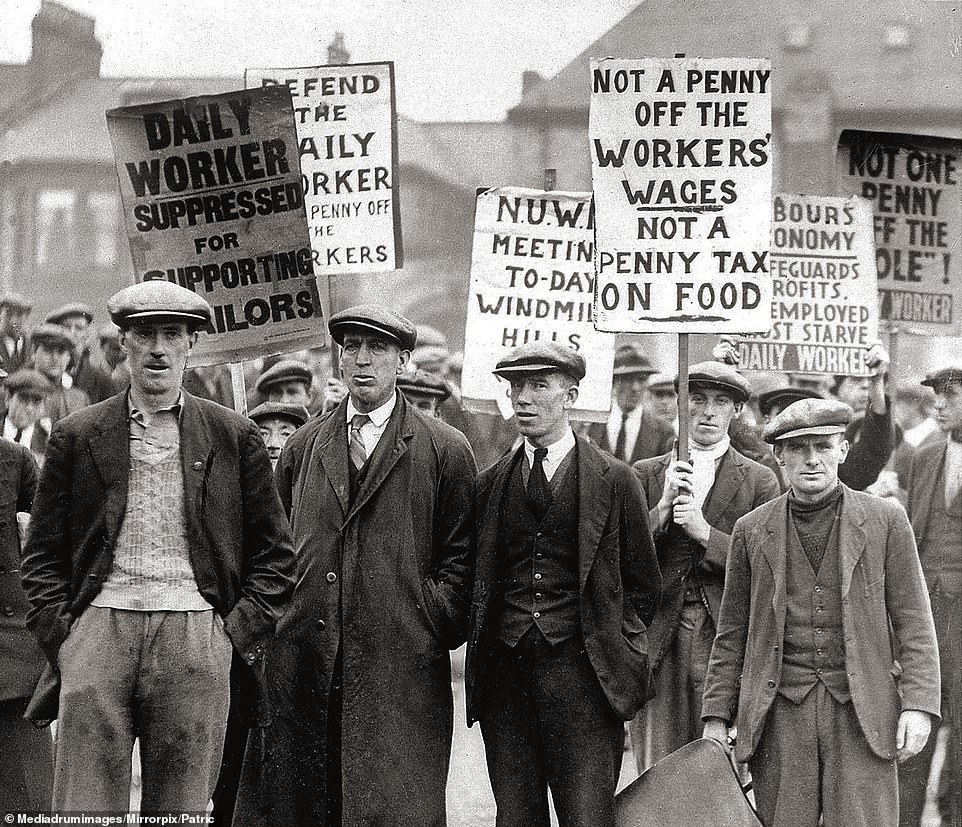 Strike! Workers in the north east of England are pictured in 1926 demonstrating during the General Strike, which was called by the TUC on May 3 that year after roughly one million miners were locked out of their mines due to a row with the owners, who wanted to pay them less money for longer hours. Workers from other industries did not attend work out of solidarity 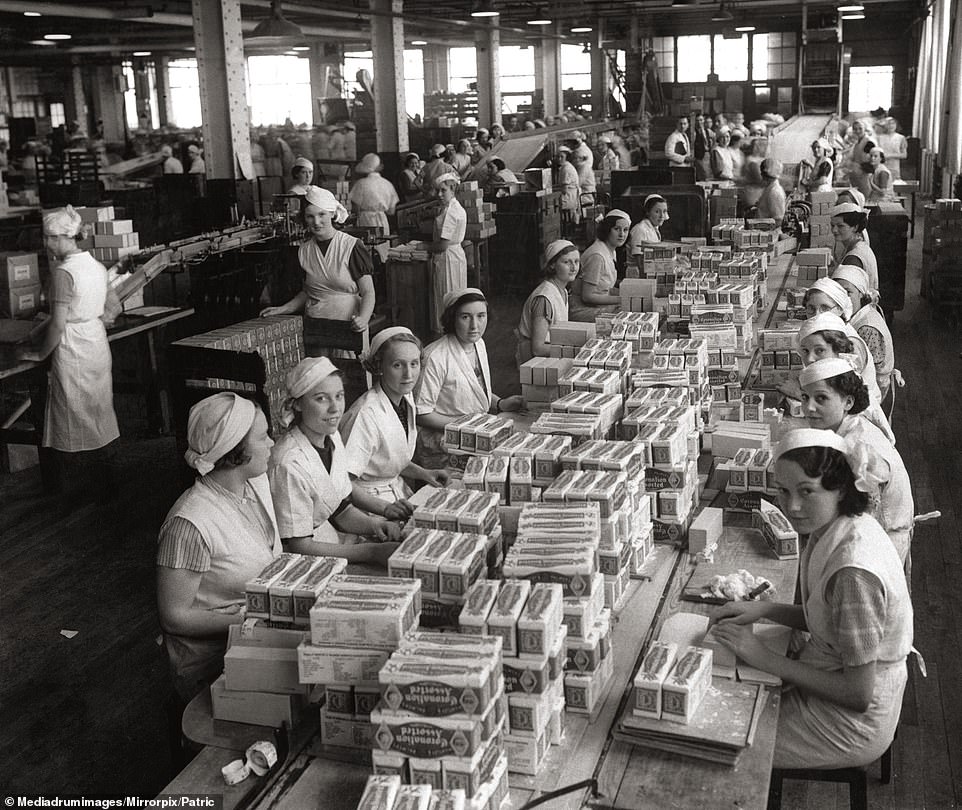 Taking the biscuit: Cartons of Coronation Assorted biscuits are packed away at this facility in Reading, 1937, two years before the outbreak of the Second World War 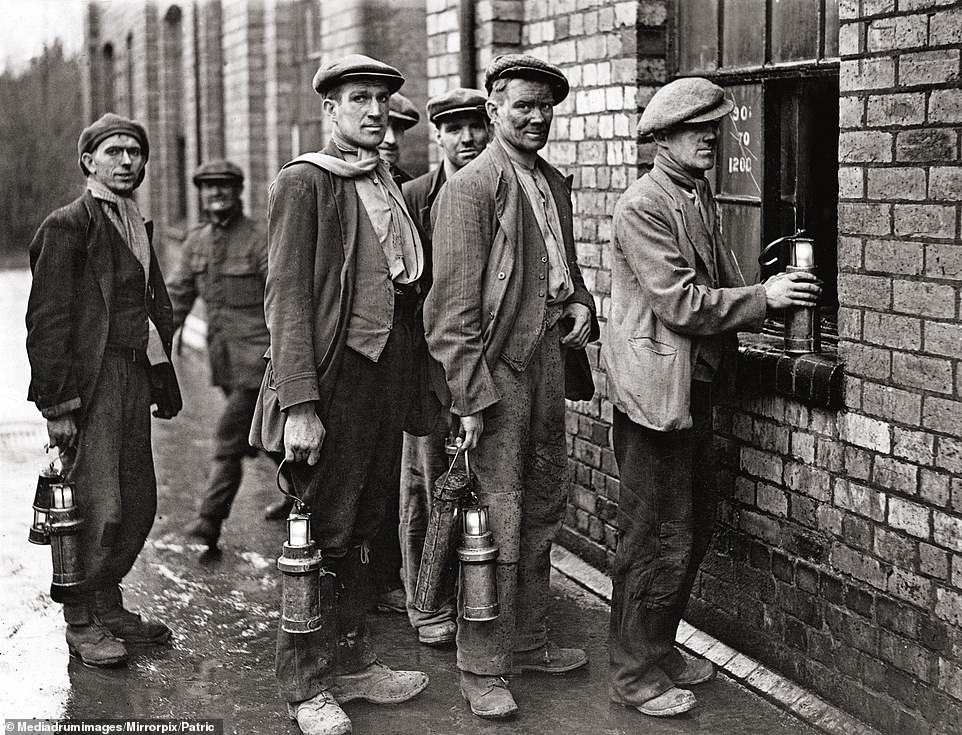 Going underground: After a hard day in the mines, these workers at Cannock Wood, Staffordshire are pictured with their Davy Lamps and lanterns in 1939. Coal output had been falling since WWI and mine owners tried to normalise profits through wage reductions and longer working hours, leading to instability in the industry

‘This is a book about work, in Britain in the 20th Century,’ Mr Potter said.

‘Work was pretty simple at the beginning of the 20th Century – you make useful stuff or you provide a useful service and then you sell it at a profit.

‘Workers did not aspire as individuals, they survived as communities and struggled for a better deal as trade unions.’

The captivating photobook looks at all aspects of Britain’s industrial heritage over the last hundred years – exploring the steelworks, car factories, mines, shipyards and workshops which kept the country among the most influential nations on Earth.

Patrick Potter’s Made in Britain: A Photographic History of Britain at Work, published by Carpet Bombing Culture, is available from March 28. 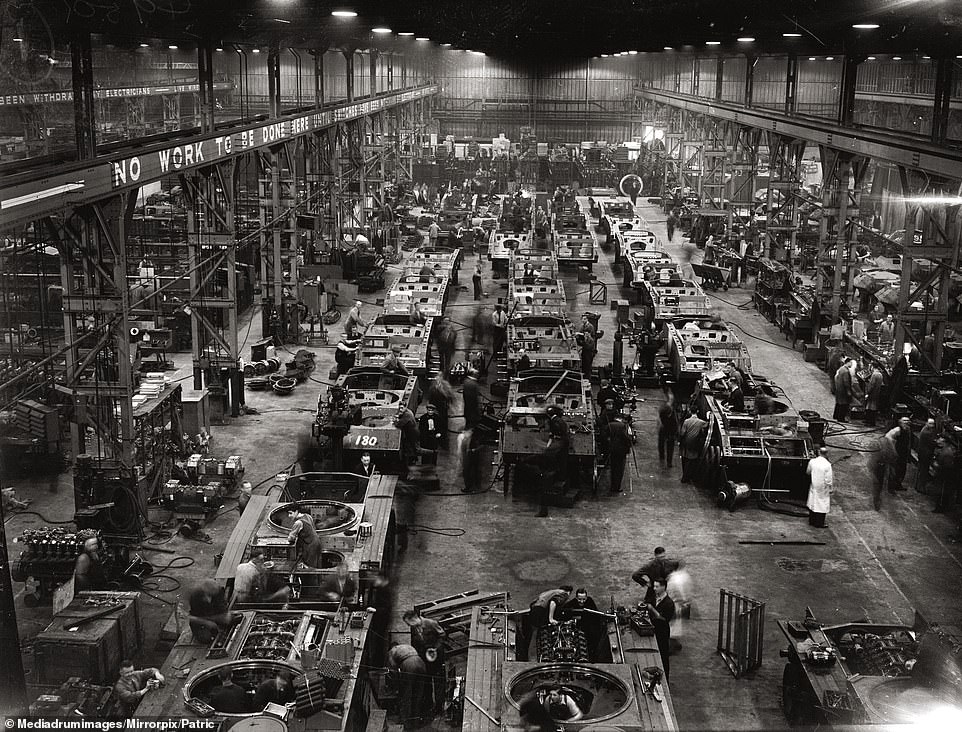 Tanks a lot: This picture of an assembly of war machines at Longbridge plant in Birmingham is thought to be from 1941 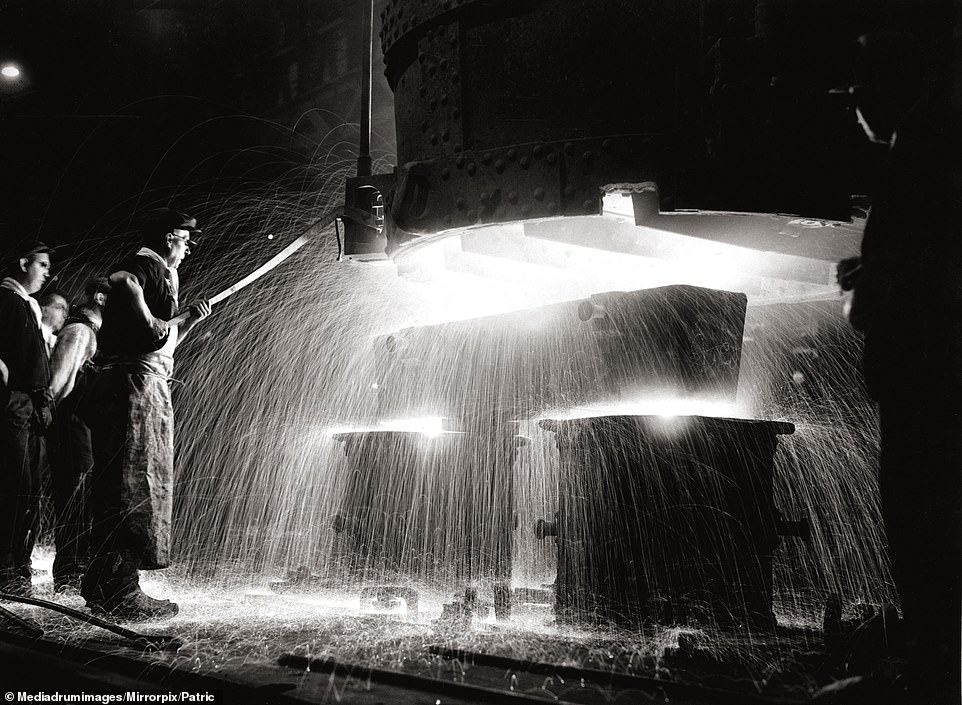 1942: Steel workers in south Wales inside a factory which burns 10,000 tons of coal a week to keep Britain’s war production moving day and night 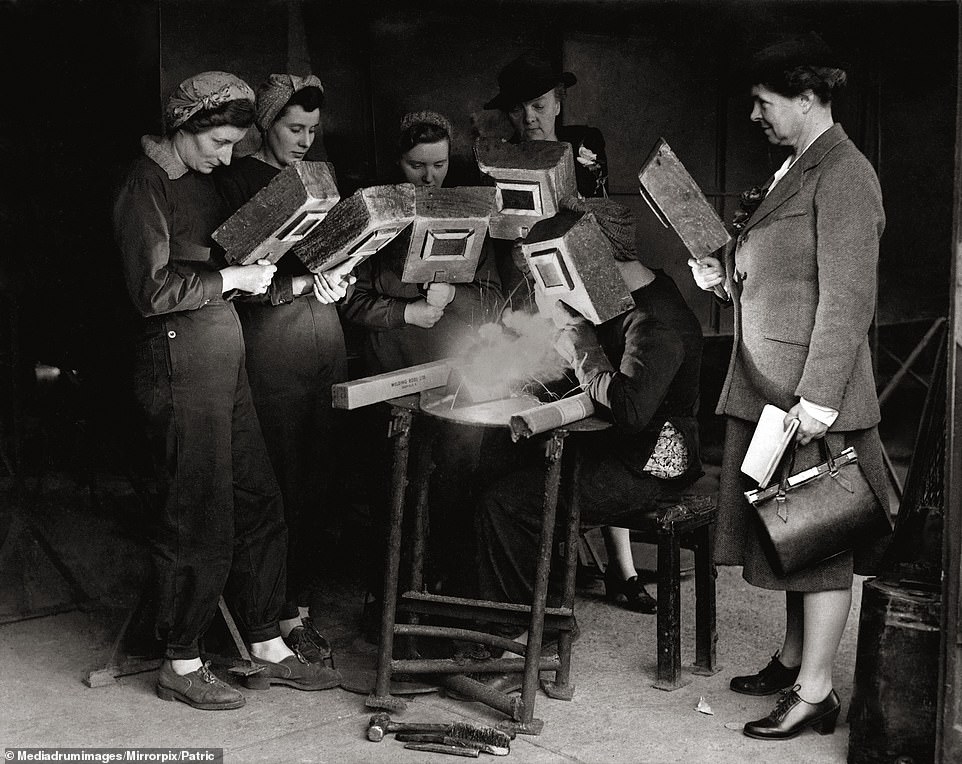 September 1942: As their husbands, brothers, sons and fathers go out to fight, the nation’s women learned to weld. Women were called up for war work in 1941 as mechanics, engineers, munitions workers and others. Initially only single women between 20 and 30 were called up but nearly 90 per cent of single women and 80 per cent of married women were working by mid-1943 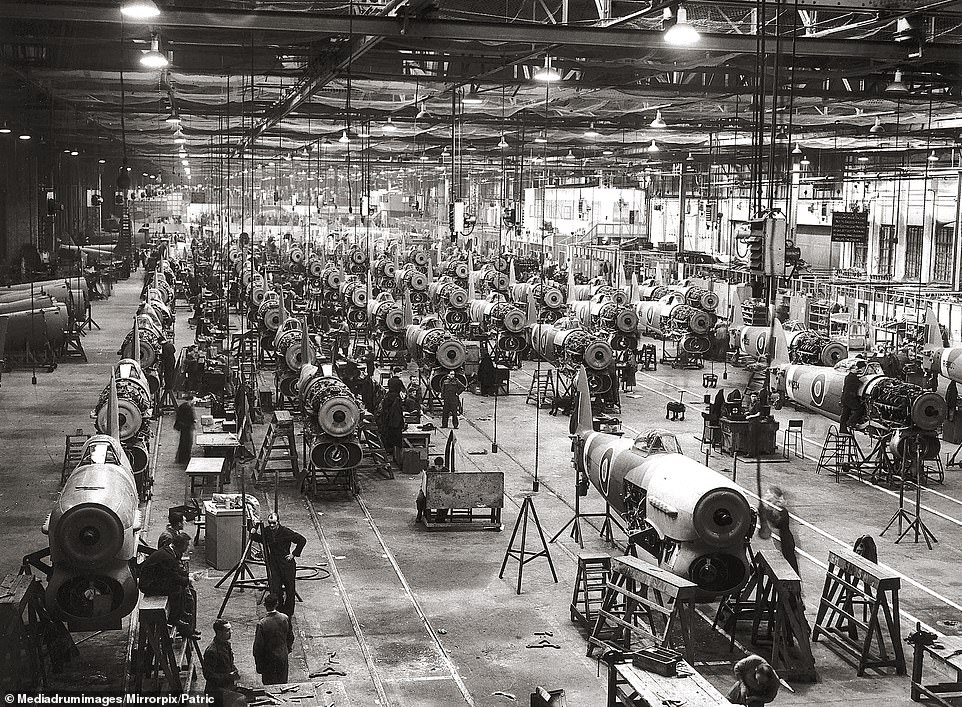 Workers stand alongside their Hawker Typhoon fighters in production at an aircraft factory in the west country, 1944. The Typhoon was essential for maintaining British air superiority towards the end of the Second World War 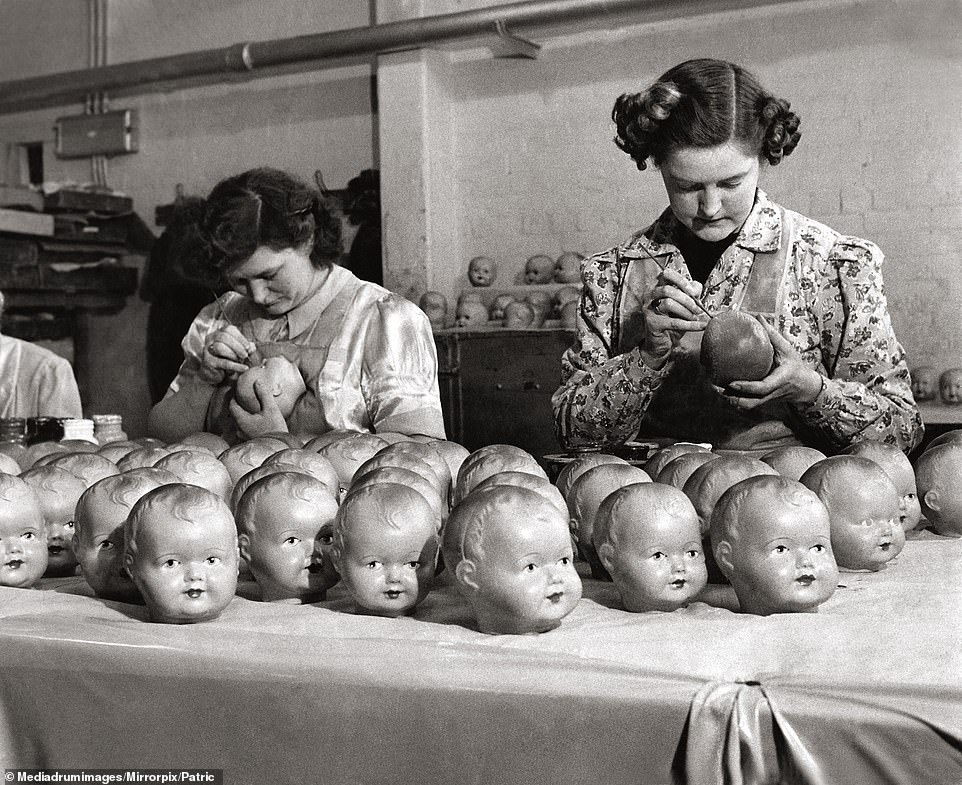 War’s over: The eyes of 900 dolls were painted every day at this Cascelloid Ltd factory in Leicester, pictured in 1948 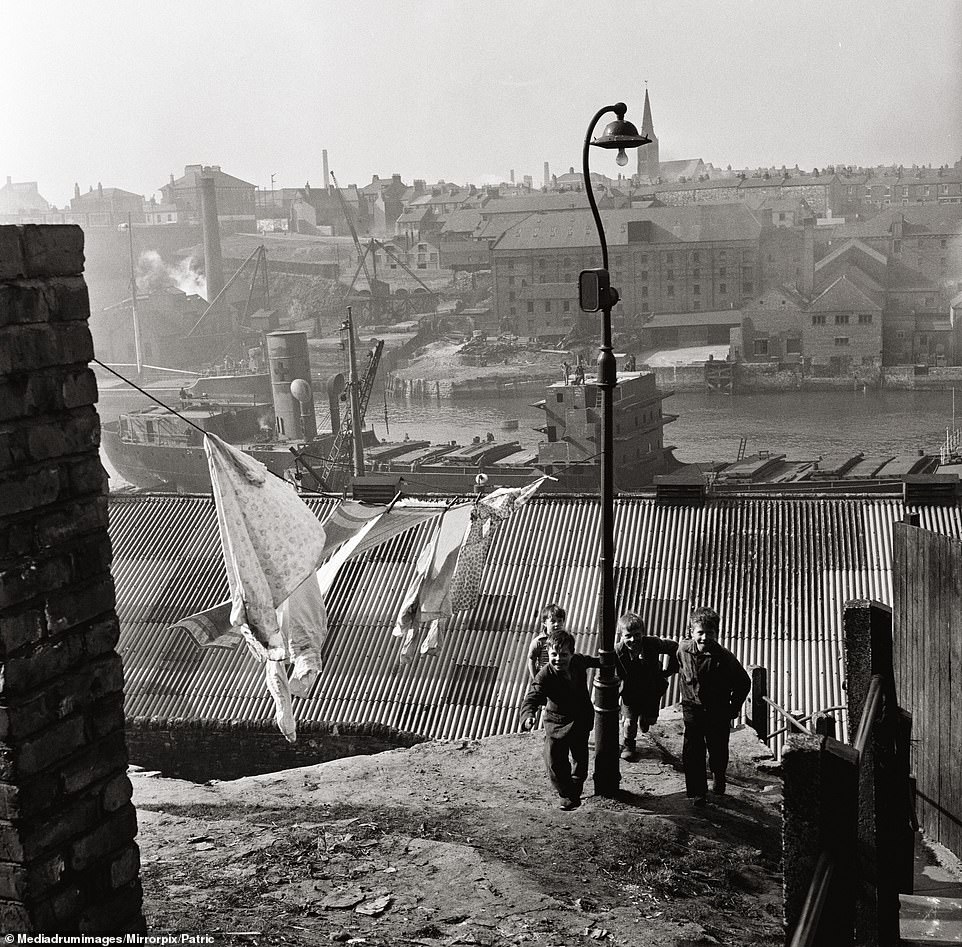 Children are pictured playing outside in Sunderland, 1954 as the country begins to recover from its wartime woes. Sunderland had been a key target of the Luftwaffe, who claimed hundreds of lives and damaged local industry 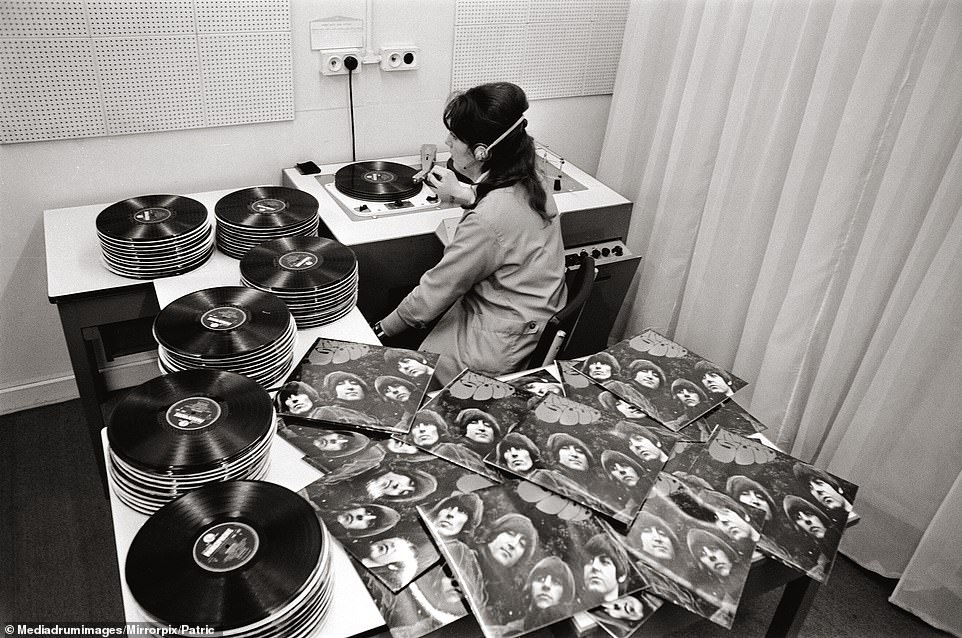 Beatlemania: The production line at the EMI factory in Hayes, Middlesex 1965. The Beatles, who formed in Liverpool in 1960, are regarded as one of the most influential music acts in history 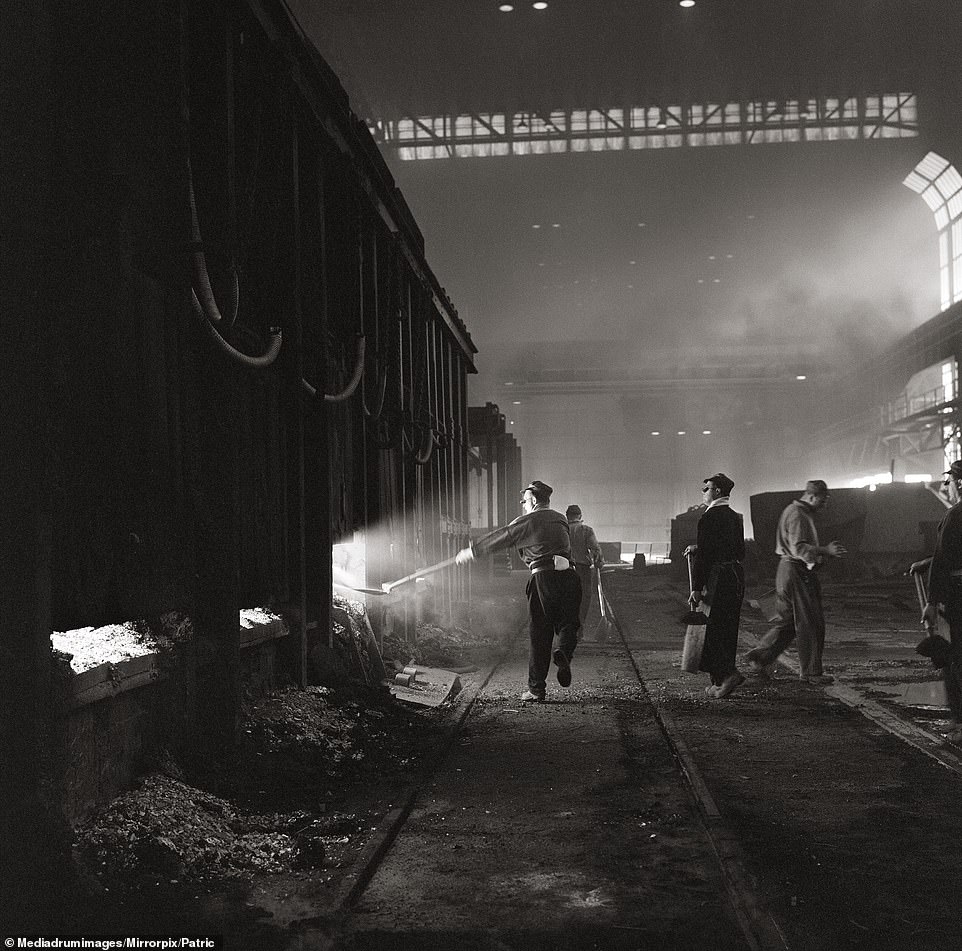 Port Talbot steel works in Wales, pictured on April 30, 1965. The site was constructed between 1901 and 1905 and named after Welsh Liberal politician Christopher Rice Mansel Talbot 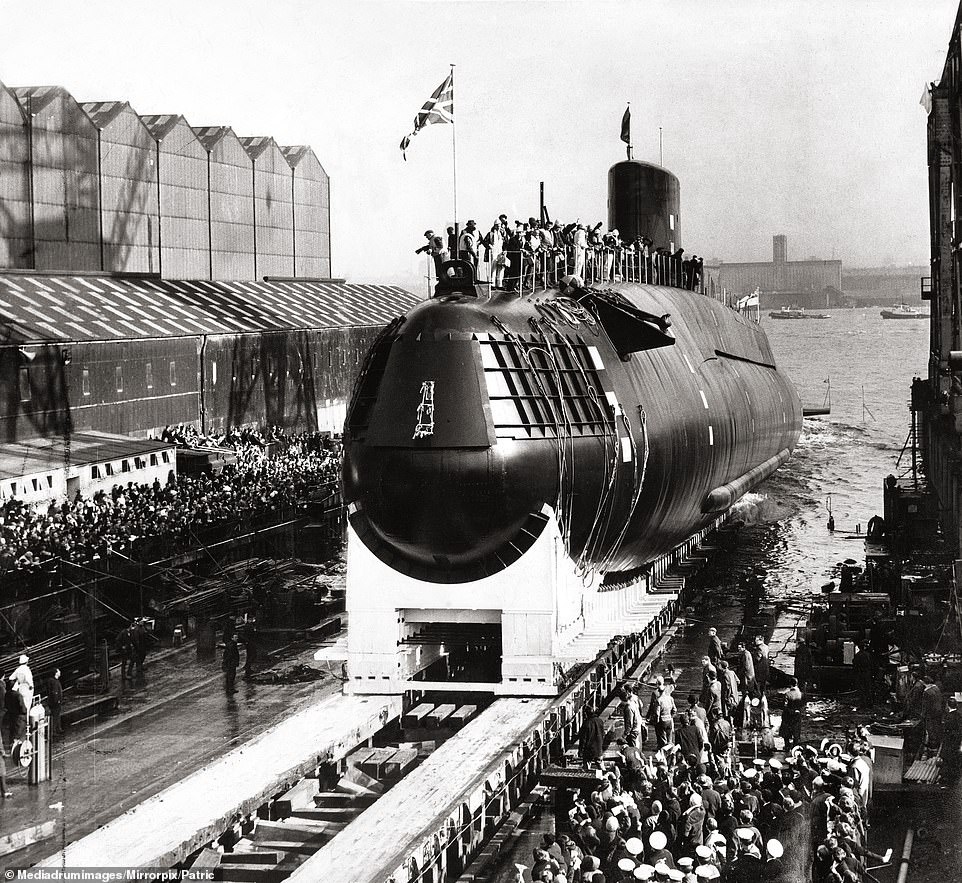 The HMS Renown submarine carried ballistic missiles throughout the heightened tensions of the Cold War, pictured here sliding into the River Mersey with Cammell Laird workers riding high on her back, 1967 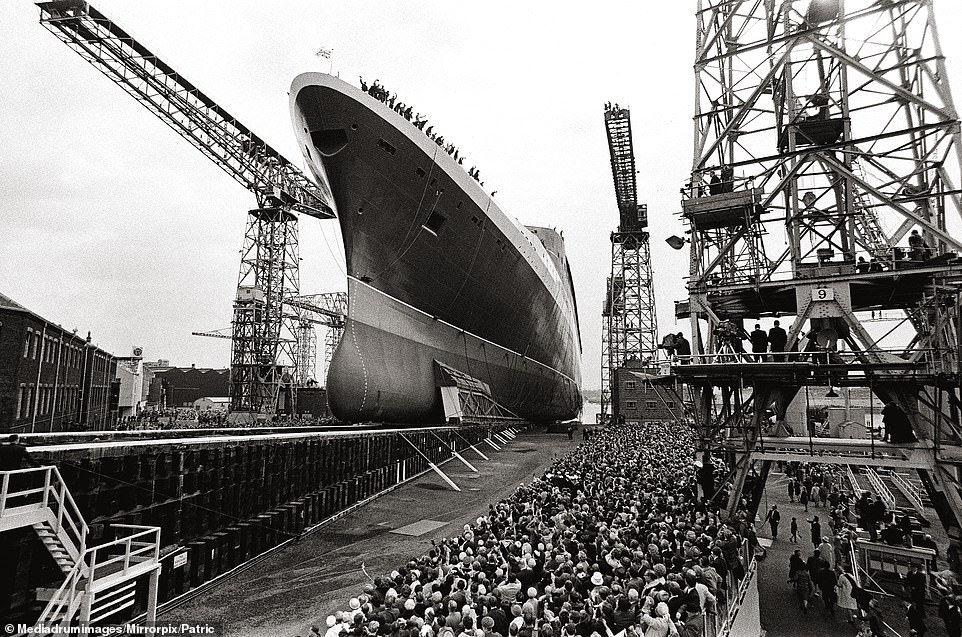 1967: Queen Elizabeth II launches the Cunard cruise liner named after her, the QE2, in the Clydebank, September 20. Tens of thousands of people gathered to watch the Queen appear, alongside Prince Philip and Princess Margaret, to launch the vessel, which would go on to sail 5.6million miles 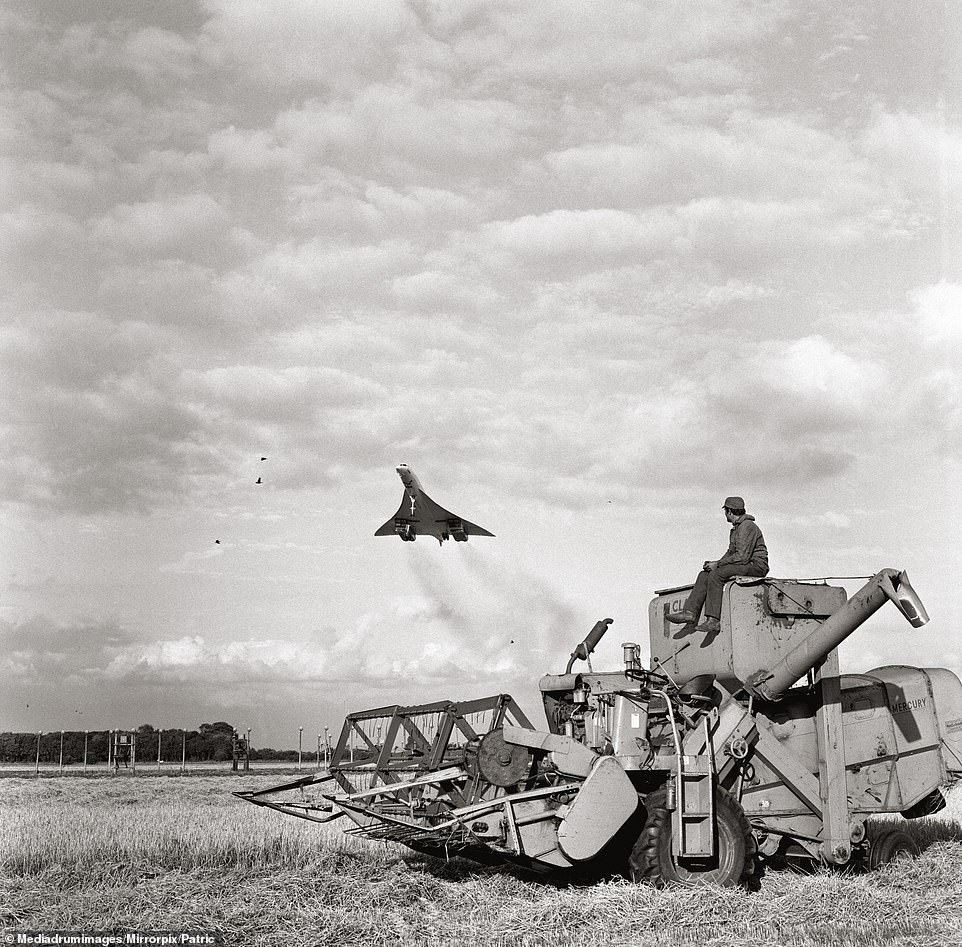 1970: Concorde flying over RAF Fairfield after breaking the sound barrier. It could fly to the US in under three-and-a-half hours. The turbojet was first flown in 1969 and is one of two supersonic transports to have been used commercially 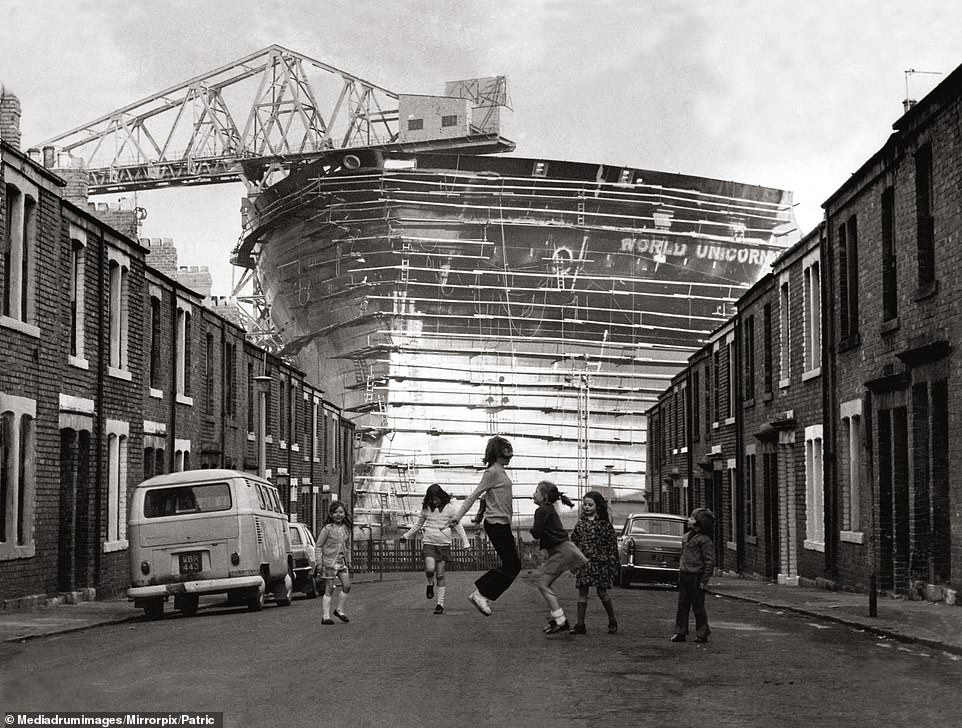 Children pictured skipping in the shadow of the impressive World Unicorn Ship, which was launched in 1973, being built at Swan Hunter ship builders in Wallsend in the north east