Madelaine Petsch reveals she had to move due to privacy issues

Sometimes it’s not easy being a celebrity and for Riverdale star Madelaine Petsch, her fame has even cost the 23-year-old her privacy as she revealed in a video posted to her YouTube channel.

The actress, who posted the eight-minute clip on Wednesday detailing her move to Vancouver, detailed how she moved into what was supposed to be her home for the next ten months while she filmed season three of the CW series.

However, Madelaine – who is from Seattle, and currently lives in LA – was only in the home for two days before she had to move due to ‘privacy issues’ at the property.

Not happy: Madelaine Petsch, 23, revealed in video posted to her YouTube channel that she had to move apartments in Vancouver due to privacy issues 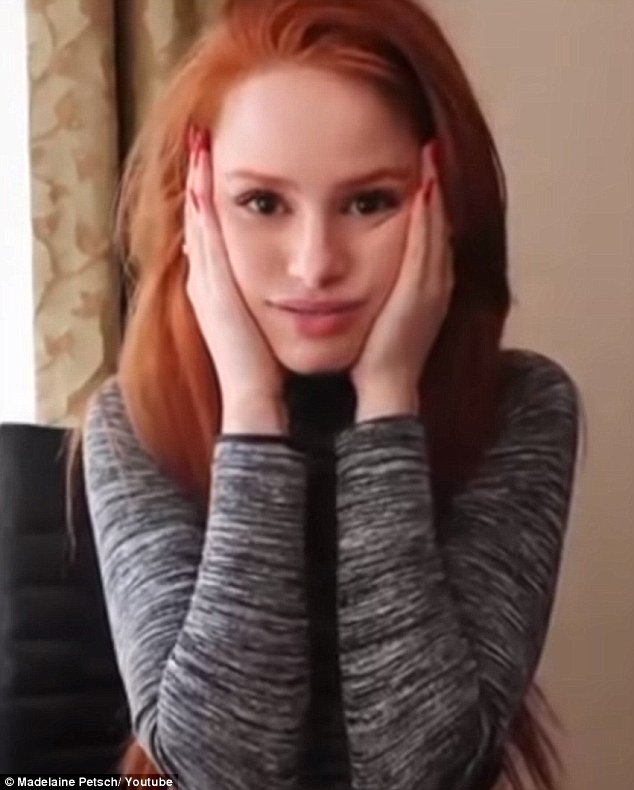 Stressed: The Riverdale star was only in the home for two days before she had to move due to ‘privacy issues’

‘We moved into what was supposed to be my home for the next ten months,’ she said in the video. ‘We were there for two days and on the second day we were there, I found out I had an issue with privacy at this location.’

Although she didn’t go into a huge amount of detail about what caused the issues in the first place, she explains that the problems were so severe she was unable to continue living there, and moved out almost immediately.

‘That was a huge wrench thrown in the wheel of my life,’ she added. ‘Luckily I was able to find a hotel room to stay in while I looked for a new apartment.’

Madelaine, who plays Cheryl Blossom on the show, was also able to find a new apartment although unfortunately, it wasn’t furnished, which left her having to scramble to buy furniture for her new place.

‘I found an apartment on Saturday,’ she said. ‘It was unfurnished – I usually get furnished places in Vancouver. What are you going to do? I need a place in a pinch so I was like let’s do it, I’m getting unfurnished.’

‘On Sunday we went to Ikea and got everything that we needed and then today (Monday) I have spent the entire day building furniture,’ she added. ‘My hands – look at how bright red my thumb is!’ 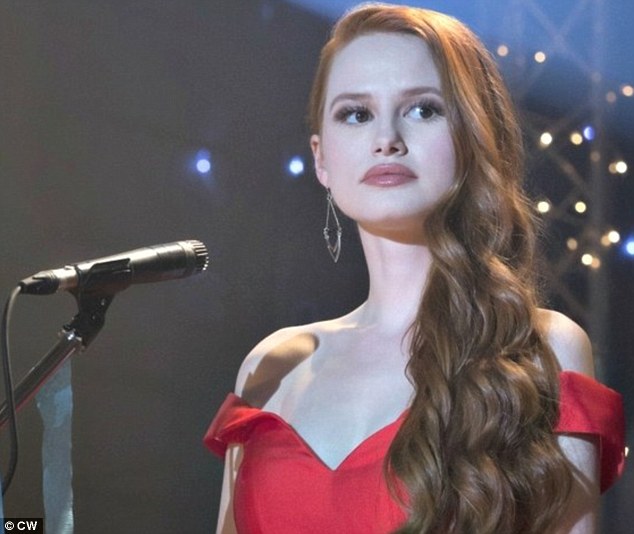 Actress: Madelaine plays Cheryl Blossom on the CW series, which will return on October 9 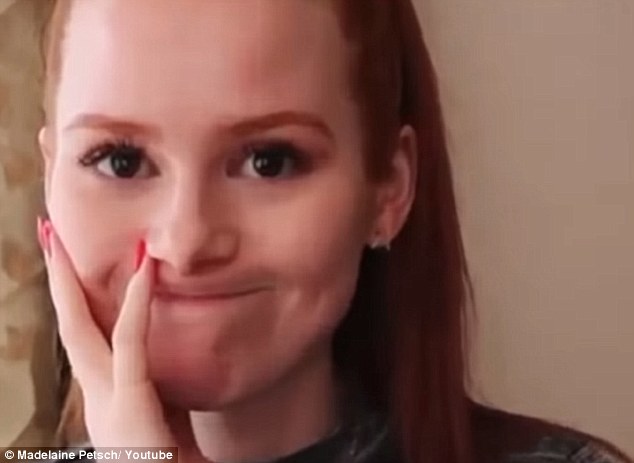 Not as planned: Madelaine was also able to find a new apartment although unfortunately, it wasn’t furnished, which left her having to scramble to buy furniture

Fortunately, it all worked out and despite the hiccups, she’s still very much excited to get started filming season three of Riverdale.

‘I was like, do I even tell them about all the chaos that has happened and then I was like you know what, this is life baby, you got to roll with the punches,’ she said.

‘Oh my goodness! More importantly, my first day back to camera for Riverdale season three is tomorrow! I am so excited – we are starting out with a huge bang.’

In her video, which detailed the moving process from her on the plane to Seattle, where her parents live, to Vancouver where Riverdale is filmed, Madelaine also gave viewers a sneak peak of the upcoming season.

But before she could give fans a preview of what’s to come, she had to make it to the Riverdale set first, which turned out to not be as easy as she originally planned because she left her camera in the back of her dad’s car. 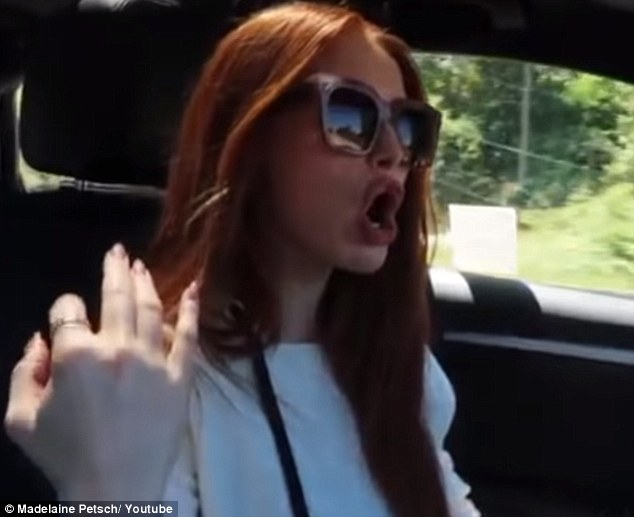 Road trip: Before she detailed her privacy issues, Madelaine took fans with her on her travels back to Vancouver 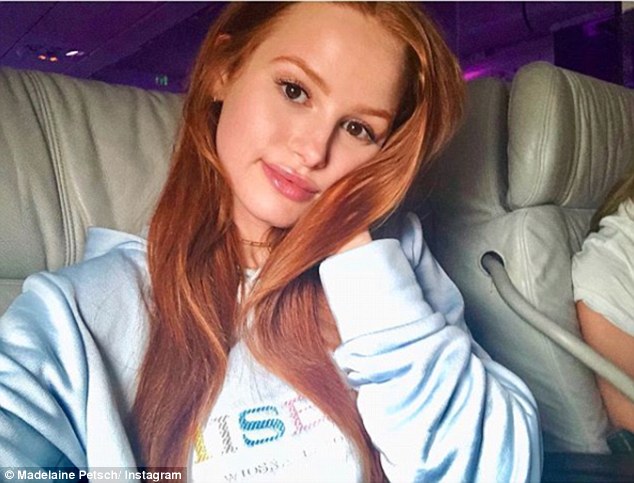 Ready: Madelaine posted a picture to Instagram of her on the flight to Seattle, where she drove to the Riverdale set in Vancouver

‘My dad took his car to a meeting,’ she said. ‘We went about our morning and then we were about to leave to drive and I was like where’s my camera,’ she added.

‘My mom used my dad’s car to come pick me up from the airport and my camera was in the back of my dad’s car at his meeting! Now it is 10:30am and I have a fitting at the Riverdale set at 3pm in Vancouver.’

‘We’re on a very tight schedule, we planned this to the tee and then my camera was in my dad’s camera so we just drove all the way to my dad’s meeting, picked up my camera and are now back on the road going to Vancouver.’

‘But it looks like we might still be on time, which is very exciting so good morning and welcome to day two of the craziness that is me moving back to Vancouver for season three.’

Madelaine managed to back it through the border without any difficulties and even made it on time to her fitting where she gave viewers a glimpse of Cheryl’s wardrobe for the upcoming season. 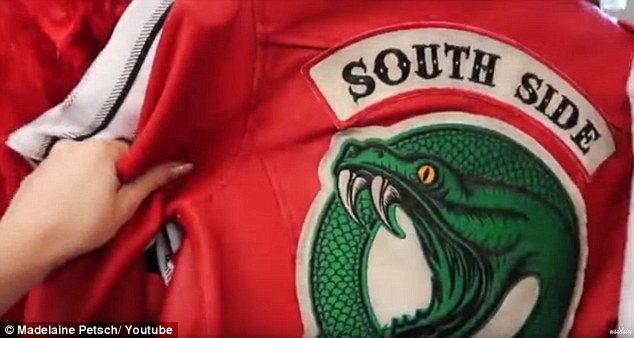 Sneak peak: Madelaine showed a preview of Cheryl’s wardrobe for season three, which consisted of a Southside Serpents leather jacket 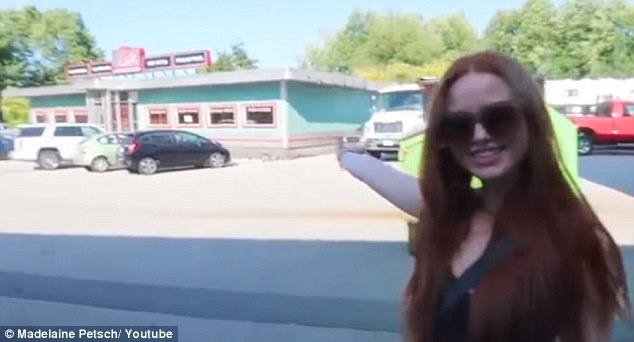 On set: She also showed viewers Pop’s Diner, which for non-fans of the series, is where a lot of scenes in the show are filmed

And she also showed viewers Pop’s Diner, which for non-fans of the series, is where a lot of scenes in the show are filmed.

There’s no telling what surprise twist and revelations will occur in the third season but according to the show’s writer, Roberto Aguirre-Sacasa, the third season will test the characters as they try to stay ‘optimistic’ in town consumed with chaos.

‘In season three we’ll see a Riverdale that has fallen to the dark side – you can call Riverdale Sin City in a sense,’ he told Entertainment Tonight in May.

‘On some level, this next season will be able how our characters try to maintain their decency and optimism while living in the once all American town, which has now descended into chaos and become a full fledged crime town.’

And with production of the CW show underway, fans won’t have to wait too long before the premiere of the third season, which will air on October 9.