By Nick Pisa In Faro For Mailonline

Madeleine McCann suspect Christian Brueckner has accused German police of altering a photograph of him to give him ‘rabbit like teeth’ and resemble a sex attack suspect.

Brueckner, 45, is currently serving seven years for the rape of a 72-year-old woman but he has also been named as the man responsible for the kidnap and ‘murder’ of Madeleine.

German police also suspect him of a string of sex attacks in Portugal from where the British toddler disappeared in May 2007 and among them is an attack on a 10-year-old German girl on a beach just a month before.

But in a letter obtained by MailOnline Brueckner – who has been given access to the files – accuses investigators of manipulating an image to give him more prominent teeth. 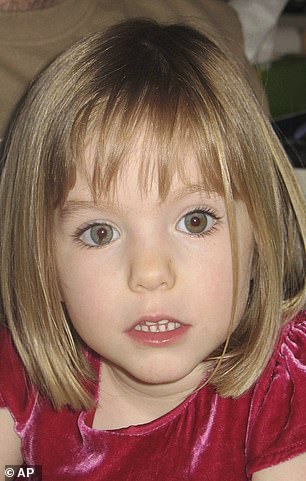 He wrote: ‘I discovered three proofs (sic) which are manipulated by the BKA (German police). I know this sounds unbelievable for you. The way they manipulated the proof in such an unprofessional work (sic) that I was laughing.

It’s time I tell you that I have still not lost my sense of humour, even in this critical situation. This is what keeps me alive.

‘Now you want to know what they manipulated ? I will tell you two things. The BKA knew that the victim told the police in Portugal that the culprit had teeth ‘like a rabbit’.

‘Or perhaps they knew that he had something wrong with his teeth. So they took a photo of me and changed my look by making my teeth terrible ugly.

‘Even the victim said by seeing it that she can’t remember that they were so terrible, that’s funny isn’t it ?

‘But not enough, the BKA took a file of a dentist I have been to in 1999, OK it’s a prison file. They just wrote by hand into this very old file that I have a special kind of bone where the teeth are in (sic).

‘They say the bone on top is much further in front than the one underneath. That’s definitely not me, it’s a fake. This makes it quite easy for me to show the opposite. 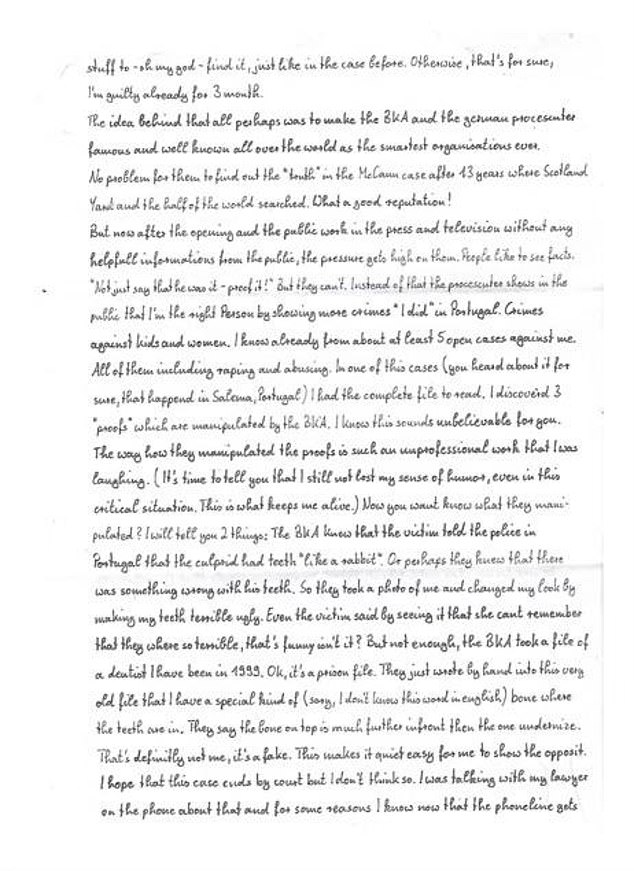 ‘I hope that this case end up in court but I don’t think so. I was talking to my lawyer on the phone about that and for some reason I know that the phoneline gets controlled by the BKA which is forbidden.

‘That means they know from my discoverings (sic) and also that they will lose face in front of the court and of many other witnesses.

‘I’m curious about the other cases but until now my lawyer has noy not got them. That means anyone can say anything about me but I can’t say a word for my defence.’

The girl, who MailOnline knows the identify of but can’t reveal, is now living in Germany and has a successful career but at the time of the attack was on holiday with her mother and brother.

In their statement they describe how a man grabbed the girl and pulled her to one side on the beach before committing a sex act on himself.

The girl’s mother saw what was going on and rushed towards her daughter and the attacker – who was naked apart from a backpack and towel over his arm – fled.

Prosecutors in Germany hope to charge Brueckner with the attack later this month, as well as at least three other rape attacks and an indecent exposure in Portugal between 2004 and 2012.