Mae Whitman has come out as pansexual.

The actress, 33, revealed her sexuality for the first time in an Instagram post as she praised Disney Channel’s series The Owl House for its representation of the LGBTQ+ community.

In her post, Mae revealed she now identifies as pansexual because she feels it is the label that ‘fits her best,’ and said she’s ‘proud and happy’ to be a member of the community.

Coming out: Mae Whitman revealed a more private aspect of her life on Monday, when she tweeted her appreciation for the Disney show The Owl House, for which she voices a role

‘Just taking a moment to say I am SO proud to be even a small part of a show like The Owl House,’ Mae wrote on Monday.

‘Being pansexual myself, I wish I had such incredible characters like Amity and Luz in my life when I was growing up. Queer representation is sososo important :,) keep it up world!’

The actress also included an animated still from the show, showing the two characters in question, including Amity who she voices. 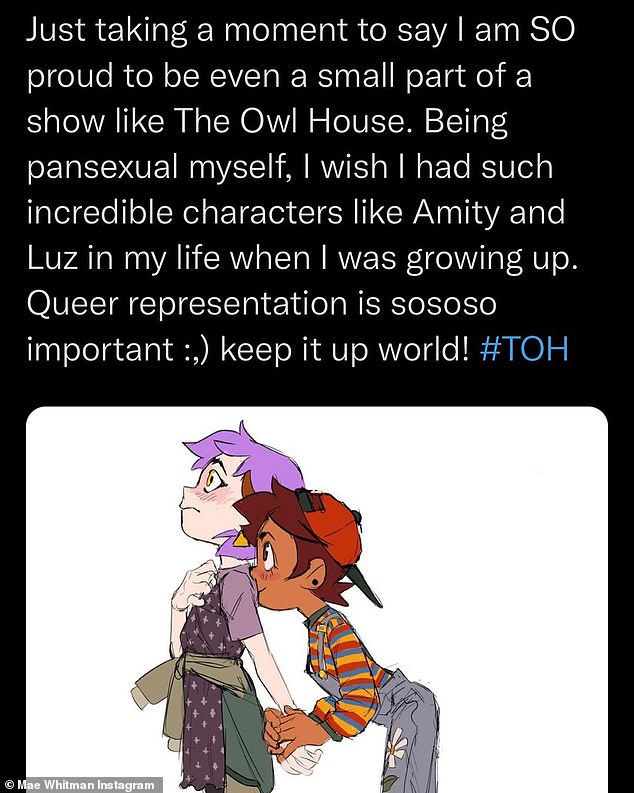 In the social media share: The actress identified herself as pansexual, saying that she wished she had characters like the ones featured in the show to look up to when she was growing up

Mae then shared another tweet explaining what being pansexual specificially means to her, offering the definition that it means an individual who is attracted to all genders.

‘I know ppl might be unfamiliar with what pansexual means; for me it means I know I can fall in love with people of all genders,’ she wrote.

‘This is the word that fits me best,’ Mae continued, adding a rainbow emoji, ‘and I’m proud+happy to be part of the Bi+ community :,)’ 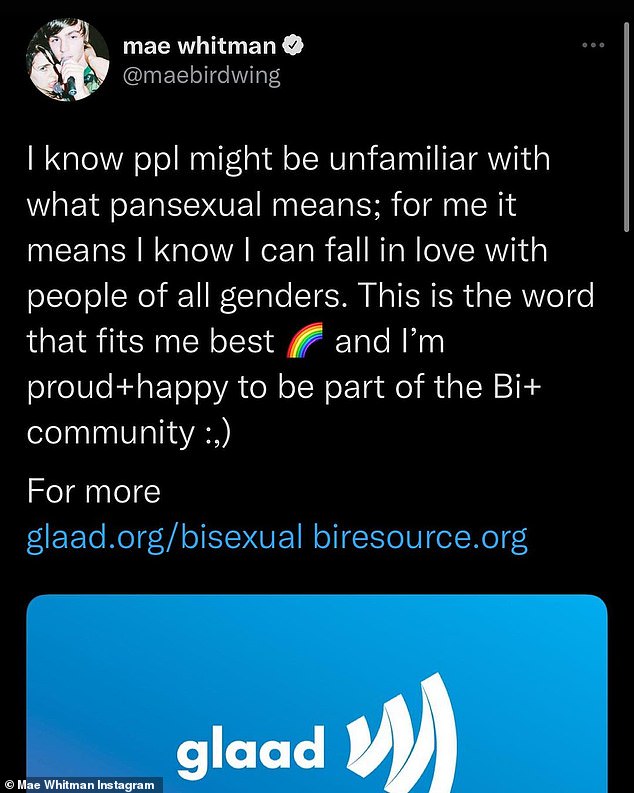 Then, Whitman sent out another informative tweet, explaining what being pansexual meant for her: ‘For me it means I know I can fall in love with people of all genders’

Mae then included a link to a GLAAD article explaining the definition of bisexuality, to offer fans more insight into how she’d chosen to define her sexuality.

The Duff star included both messages on Instagram as well, along with some fun selfies including one in which she sat on a wooden deck with a black dog in her lap.

Underneath, an animated caption read, ‘You might say I’m, Bi-Furious’. 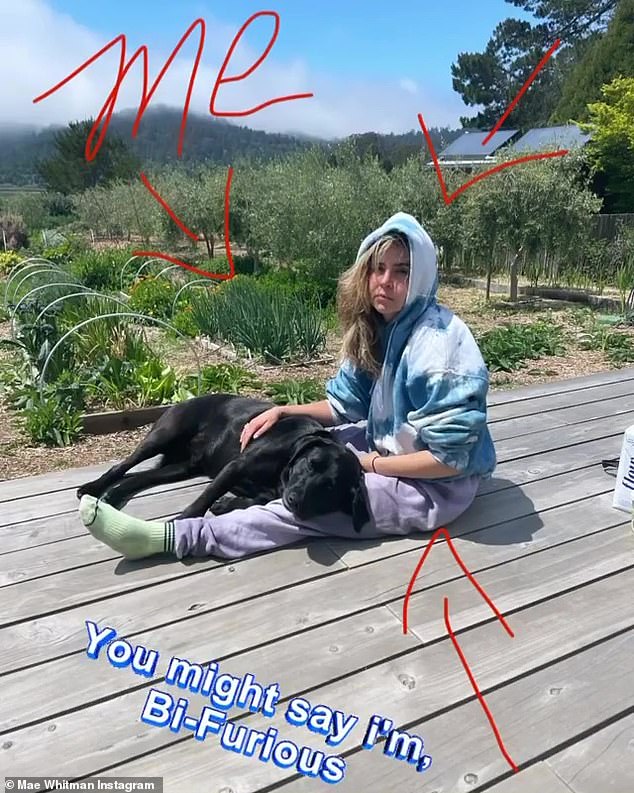 Great caption: The Duff star included both messages on Instagram as well, along with some fun selfies including one in which she sat on a wooden deck with a black dog in her lap

She also included another selfie along with several other stills from the animated fantasy show, which also features the voice of Just Shoot Me’s Wendie Malick.

The series focuses on Luz Noceda, who pursues her dreams of becoming a witch after being transported to The Boiling Isles, with fans gripped by her blossoming romance with Amity, an abomination expert.

Earlier this summer, Mae’s NBC show Good Girls was canceled after four seasons, with a number of episodes still remaining to air.

The show also starred Mad Men’s Christina Hendricks, along with Retta of Park And Recreation fame. 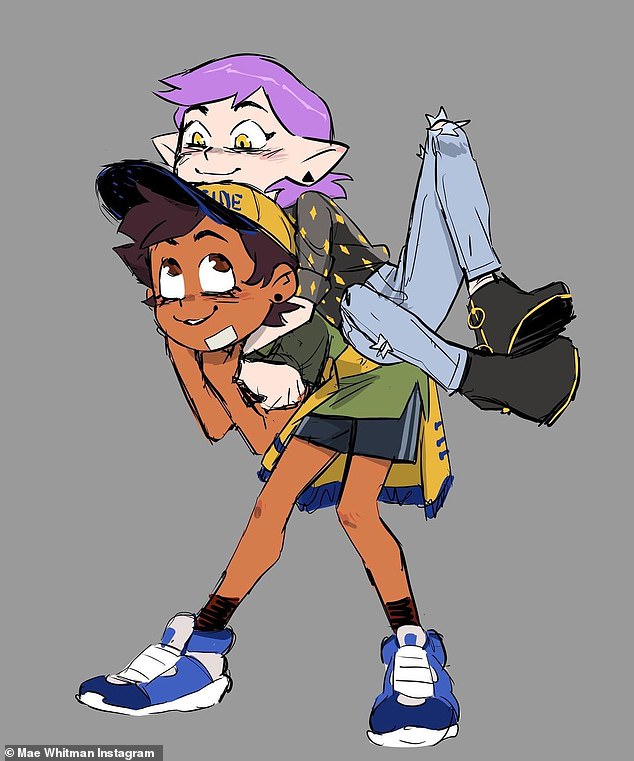 And as of last month, it seems that Good Girls’ cancellation was due at least in part to complication concerning show actor Manny Montana’s contract, salary and schedule.

Sources with the series, NBC and Universal Television, spoke with TV Line in the wake of the show’s cancellation, which comes midway through its fourth season and with five remaining episodes set to air.

An insider noted that Montana, 37, was not keen on taking a pay cut for the series, amid a ‘strained working relationship’ with Hendricks, 46.

An NBC source told the outlet the network ‘very much wanted to bring Good Girls back for one more season to close out the story but unfortunately… were unable to make the financials work.’

Good Girls’ production team was also hopeful that they would be able to continue the program’s story with a fifth season, although Deadline reported that NBC did not see a way to make things work financially. 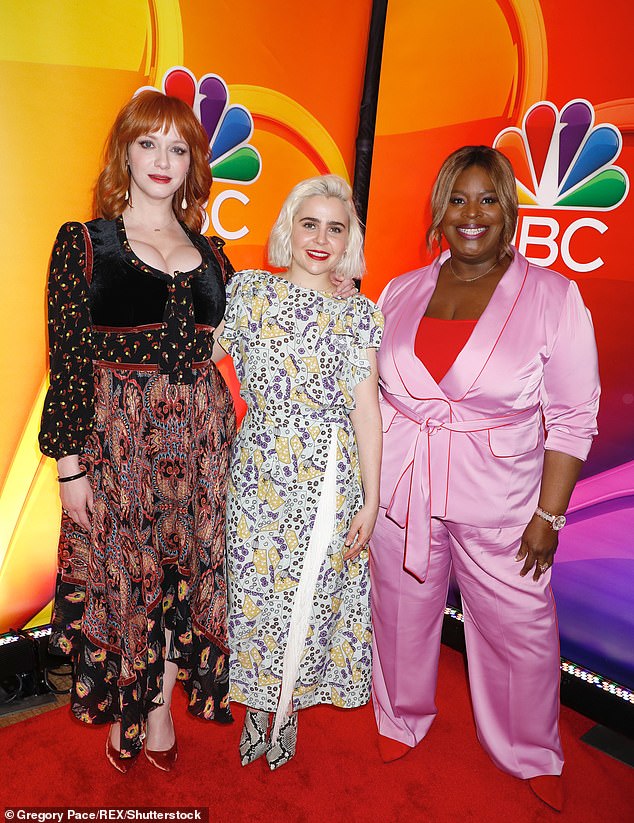 Seen in 2019: Earlier this summer, Mae’s NBC show Good Girls costarring Christina Hendricks and Retta was canceled after four seasons, with a number of episodes still remaining to air