And on Sunday, the 27-year-old starlet said she was determined to wow fans again in the 1970s-inspired outfit very soon.

Taking to Instagram, Elizabeth looked stunning in the figure-hugging $339 Fantasy Jumpsuit by Nookie as she addressed her potential critics.

So nice she wore it twice! MAFS’ Elizabeth Sobinoff, 27, (pictured) has hit back at shamers while donning a body-hugging glittering jumpsuit for a second time highlighting her svelte figure on Instagram on Sunday

‘Some people hate being seen in the same outfit more than once, no I’ll be rocking this number for a while to come,’ she wrote.

Elizabeth gushed over the head-turning outfit, admitting the sequinned jumpsuit made her feel like a ‘rock star’.

‘This outfit,’ she wrote, adding a diamond emoji. ‘You know when one particular outfit makes you feel like a rockstar.’

She added she wanted to live in it while visiting the Victorian capital of Melbourne next weekend for a weekend out. 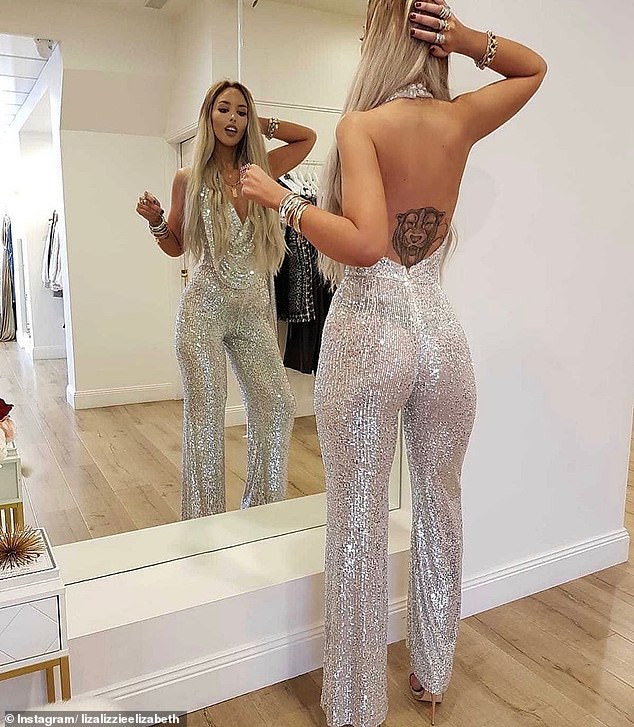 Looking lithe! Liz (pictured) wore the risque jumpsuit to a 2Day FM event in June, soon after she debuted her dramatic weight loss following the show. Pictured here in June

Last month, Elizabeth donned the figure-hugging jumpsuit to highlight her recent weight loss at a 2Day FM event in Sydney.

The jewellery store manager looked sensational in a sparkling silver jumpsuit while posing outside a Sydney venue.

Earlier that month, the reality star showed off her slimmed-down physique in a photo shared to Instagram – but when fans asked for her ‘weight loss secrets’ she replied that her trick was ‘getting rid of toxic people’.

This was understood to be a thinly-veiled referenced to her former friend and MAFS co-star, Cyrell Paule.

One of Elizabeth’s followers had commented: ‘So proud of you. You look amazing, what’s your secret?’

Before and after: Last month, the jewellery store manager showed off her slimmed-down physique in a photo shared to Instagram. Pictured in 2018

She swiftly replied: ‘Happiness and getting rid of toxic people – plus plenty of rest!’

When another fan asked to know her weight loss ‘secrets’, she offered a similar response about purging ‘toxic’ friends. 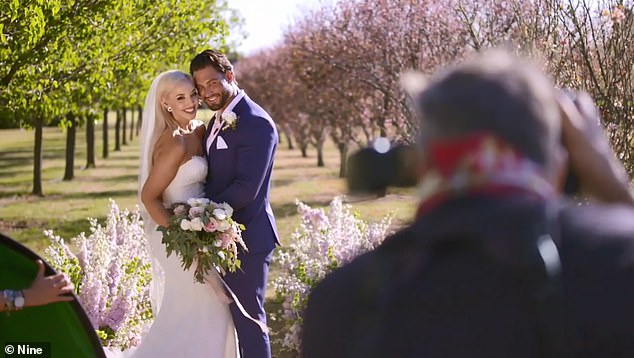 ‘I’ve never really dated girls as big as Elizabeth in the past’: Elizabeth’s weight loss comes after her ex-‘husband’ Sam Ball (pictured) infamously fat shamed her on their MAFS wedding day

In March, Elizabeth revealed she was diagnosed with Porphyria and autoimmune disease (a mild form of Lupus) over a year ago, which causes her weight to fluctuate.

‘There’s been a lot of curiosity out there, people saying to me, ‘How have you lost a bit of weight?’ she wrote on Instagram. 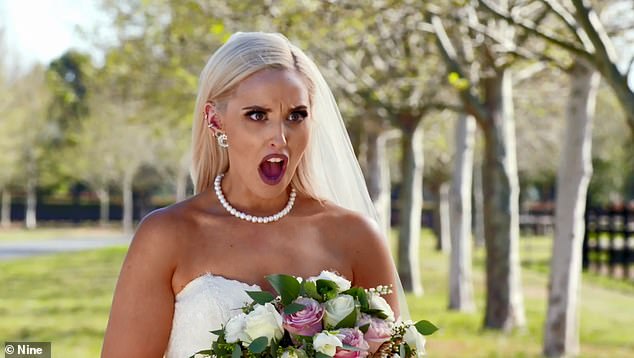 How rude! Sam told producers he wanted to get Elizabeth ‘running in the mornings’ to lose weight. Pictured on her MAFS wedding day

‘What I want to put out there is that I have porphyria, and how you manage porphyria is with a high carb diet.

‘I use chocolate because my body can tolerate it right now. Before I get the ‘there are healthier alternatives’, it is working for me currently, and I get scared to try a lot of foods because my body also rejects ‘healthy food’ too, it’s not bias.

Candid: In March, Elizabeth has revealed her chronic health issues cause her weight to fluctuate. Pictured left: in a MAFS promo photo from 2018, and right: in May 2019