Sam Ball’s affair with Ines Basic was finally exposed during an explosive dinner party on Wednesday night’s episode of Married at First Sight.

And as tensions reached boiling point, arguments erupted between a number of co-stars, including Sam, 26, and his ‘wife’ Elizabeth Sobinoff, 27.

The tattooed tradie laughed in a group setting as he recalled rejecting Elizabeth’s advances, which understandably upset her. 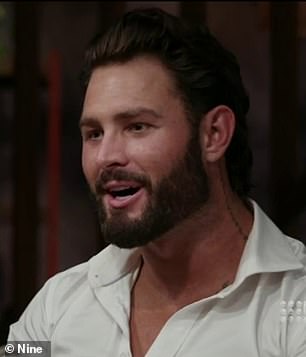 ‘I was trying to stop you from kissing me because I’m not into you!’ MAFS’ Sam Ball (right) leaves ‘wife’ Elizabeth Sobinoff (left) furious as he laughs about rejecting her advances… before his ‘affair’ with Ines Basic is exposed

‘…From the first commitment ceremony, you said you don’t care about me. But then in bed, you try and hook up with me,’ Sam said to Elizabeth as the other couples watched on.

A visibly enraged Elizabeth snapped: Kissing you is not trying to f***ing sleep with you!

‘Stop making it as if I was trying to have sex with you. It’s like, oh, my God, my mind is blown. Can you not – I don’t understand this, it’s like, the only thing that… .’

A confused Sam interjected asking: ‘So I’m a liar?’

Fellow ‘groom’, Nic Jovanovic, then weight in on the argument, saying: ‘So this is what I’ve heard. I’ve heard that you stuck your thumb in her mouth.’

Elizabeth then explained: ‘It was literally like we went to bed, I kissed Sam, and I pulled away and he said, ‘That was a bit cheeky.’

Sam again interjected: ‘Trying to defer you from trying to kiss me, because I’m not into you.’

‘I explained from the start, from the first commitment ceremony, I said, ‘Sorry, Elizabeth, but I don’t feel like we’re right for one another.’ Like, that was the honest truth.’

Adding to the drama, the other ‘grooms’ exposed Sam’s ‘affair’ with another ‘bride’, Ines Basic.

Dino Hira first pulled Ines’ ‘husband’ Bronson Norrish aside to speak privately and asked if he was aware of the ‘affair’ rumours.

‘You know, Sam and Ines got a bit too, a bit close… I don’t know if it’s true. As a mate, I’ll just tell you up front that this is what I heard.’

At one point, the other grooms approached Bronson and Sam about the rumours.

Sam replied: ‘Everyone’s made up rumours about me, like all the girls are talking – I’ve [supposedly] been in Jess and stuff’s room, I’ve been doing all this s*** – it’s bulls***.’

Bronson then asked Sam whether the rumours are true.

‘You say no?’ he asked, to which Sam nodded.

Bronson then said, ‘I believe you’ before giving Sam a fist pump.

Earlier this week, Sam and Ines took their affair to the next level during a secret meetup on the Gold Coast.

Ines spent the night in Sam’s hotel room and the pair admitted they have feelings for each other.