An alleged MAGA rioter accused of punching a cop in the head at the Capitol on January 6 is the brother of a Secret Service agent who once led Michelle Obama’s security detail, it has emerged.

The former first lady was so close to agent Preston ‘Jay’ Fairlamb III that she attended his father’s funeral in 2012, mentioned him in her 2018 autobiography and posed for a picture with him and Barack Obama at the White House.

But the bodyguard’s brother, Scott Fairlamb, now faces federal charges after an FBI operative identified him in photos and videos taken during the Capitol riot incited by Donald Trump.

The New Jersey gym owner, 43, is accused of assaulting a federal officer and carrying a dangerous weapon among other charges relating to the mob attack – but says his brother knew nothing about it.

Barack and Michelle Obama pose with Secret Service agent Preston ‘Jay’ Fairlamb and his wife during the former president’s first term in office. The former first lady mentioned Fairlamb in her autobiography and said she had grown close to her security detail 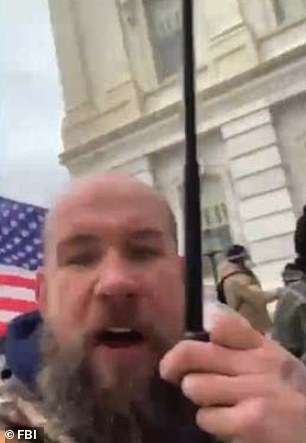 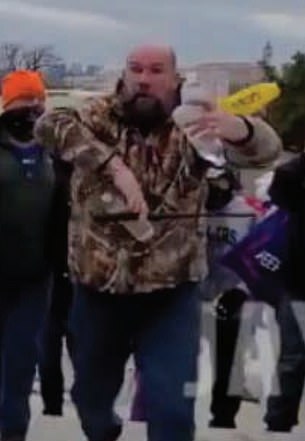 An FBI affidavit says this is Scott Fairlamb wielding a baton during the insurrection at the Capitol on January 6, which has left the New Jersey gym owner facing five federal charges 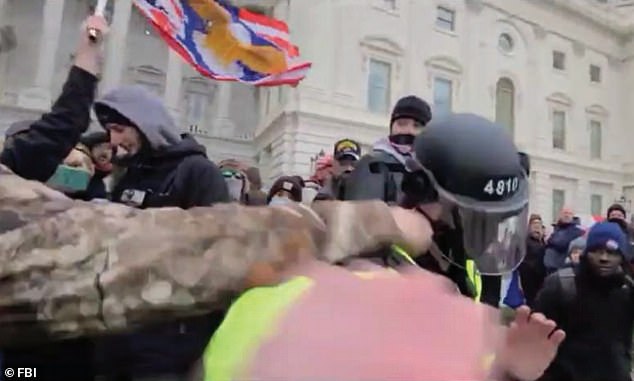 The two Fairlamb brothers are the sons of a former New Jersey State Police trooper, also called Preston ‘Jay’ Fairlamb, who died in a motorcycle accident in 2012.

Mrs Obama attended his memorial service with four Secret Service agents in an appearance in May that year which had been kept nearly secret in advance.

A friar who helped arrange her visit said parishioners were ‘very impressed with the first lady’s concern for Jay and his family,’ according to a report at the time.

The same year, another Fairlamb relative posted a picture of the younger Jay Fairlamb and his wife posing with Barack and Michelle Obama at the White House.

And in 2018, Mrs Obama mentioned agent Fairlamb in her memoir Becoming as one of the agents she had ‘grown close’ to during her husband’s time in office.

‘All of us grew close to our agents over time. Preston Fairlamb led my detail then,’ she wrote, adding that another agent had later taken over.

‘When we were out in public, they were silent and hyperalert, but anytime we were backstage or on plane rides, they’d loosen up, sharing stories and joking around,’ she said of her agents.

‘Over all the hours we spent together and many miles travelled, we became real friends.’ 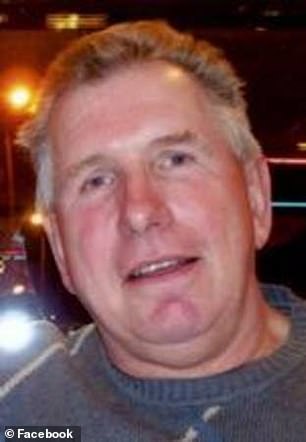 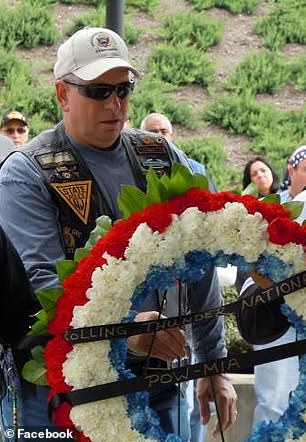 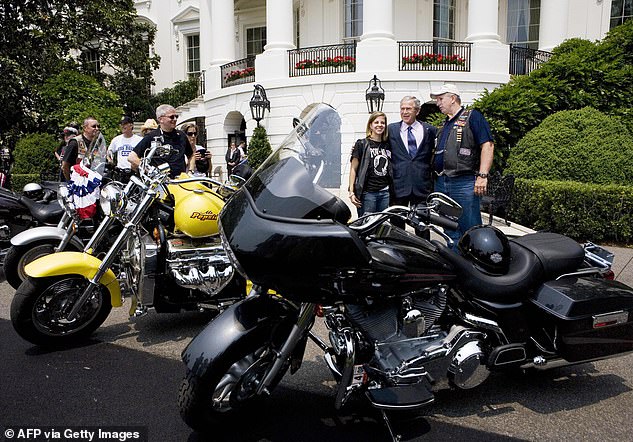 The older Fairlamb was a member of the veterans’ advocacy group Rolling Thunder, and is pictured on the right here with President George W. Bush in 2007 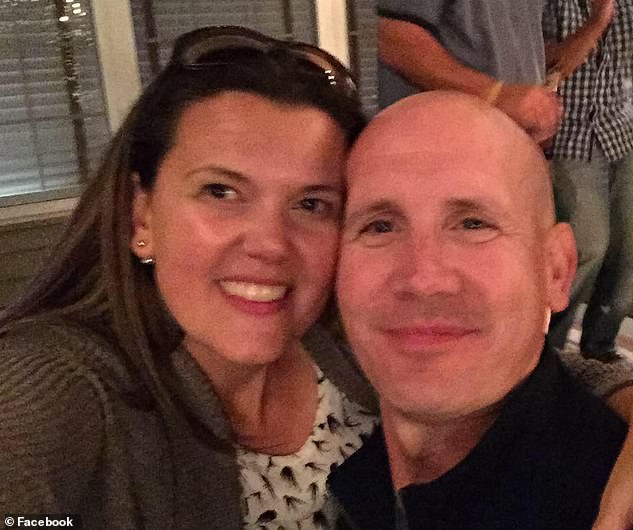 When the agent’s brother Scott Fairlamb was married in New Jersey in September 2019, Jay was listed as best man on a wedding registry website.

But Scott Fairlamb’s legal team told CNN that his brother Jay was ‘not privy to anything that my client is alleged to have done’ on January 6.

An affidavit filed by an FBI special agent accuses Scott Fairlamb of shoving a DC Police officer before punching him in the head at the West Front of the Capitol.

Wearing a brown camouflage jacket, Fairlamb is said to have been carrying a collapsible baton and said in a video posted on Facebook: ‘What patriots do? We f***ing disarm them and then we storm f***ing the Capitol’.

Fairlamb was also allegedly seen climbing on scaffolding in the Capitol grounds, while another image apparently showed him coughing on his way out after chemical agents were deployed inside the halls of Congress.

The FBI received another tip-off from a citizen who said they had grown up with Fairlamb and identified him on the scaffolding, adding that he was the owner of an Instagram account belonging to his New Jersey gym.

The FBI agent said they had matched the pictures of Fairlamb against his New Jersey driving license to confirm that it was the same person. 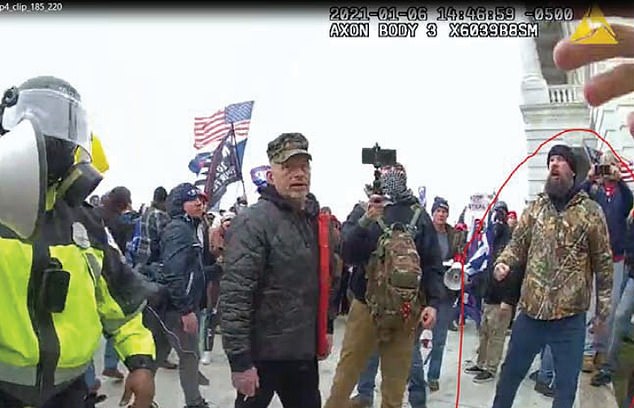 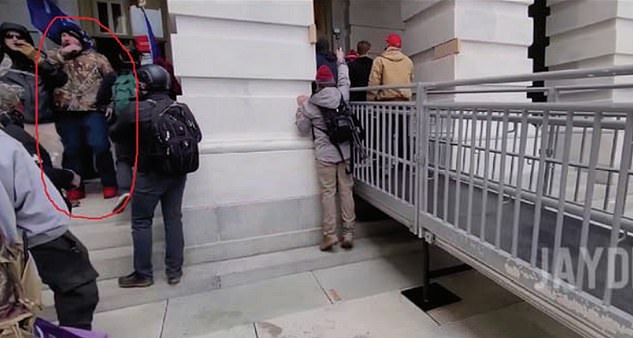 His social media accounts have since been deleted, but the gym’s website describes him as as former fighting champion who turned professional in 2000.

After his career was derailed by a leukemia diagnosis, Fairlamb opened the gym in 2014 which trains both amateur and professional fighters, the website claims.

‘Scott’s life experience and approach to training are one in the same – aggressive, focused and intense,’ it says.

One acquaintance of Fairlamb told HuffPost that the suspect had been ‘pulled more and more into the conspiracy theory vortex’ in recent years and ‘pushed everything in his life aside for it’.

After an initial interest in Trump’s ‘lock her up’ chants against Hillary Clinton, Fairlamb ‘moved to QAnon type stuff over the last few years,’ the associate said.

‘I feel for his wife, family, employees and community, but I have zero empathy for him,’ they said.

Several stories have emerged since January 6 of MAGA rioters with links to law enforcement, including two Virginia cops who posed for a photo during the attack.

At least 31 officers in 12 states are being scrutinized by their supervisors for their behavior or face criminal charges for allegedly taking part in the riot.

The invasion claimed the life of one Capitol Police officer, Brian Sicknick, who was hit in the head with a fire extinguisher as rioters occupied the building.

Four others also died during or shortly after the insurrection, which has led to more than 150 arrests in less than three weeks since then.

It also led to a historic second impeachment motion against Trump, who had repeated his false claims of election fraud in a fiery speech near the White House shortly before the attack.

Trump’s challenges to the election result were rejected by government agencies, numerous courts, the legislatures of all 50 states and eventually the US Congress.