Shops in the popular tourist resort Magaluf on Mallorca will no longer be allowed to sell alcohol after midnight or have bottles on display in their windows, local authorities have ruled.

These are the latest measures taken by the local council in order to try to ‘clean up’ Magaluf’s reputation as a party resort for young northern Europeans.

However, shopkeepers have hit back, saying the blame for excessive public drunkenness among tourists lie on bars and all-inclusive hotels.

Crackdown: Shops in Magaluf will no longer be allowed to sell alcoholic beverages between midnight and 8am, or have bottles on display in their windows

Traders say the measures as too strict and claim Calvia council, which covers Magaluf, is barking up the wrong tree when it comes to tackling tourism excesses caused by alcohol.

They claim most of the trouble caused in Magaluf is by youngsters who stay in all-inclusive establishments, not people who buy alcohol from shops.

However, Calvia council has hit back at the allegations, saying the ‘lock your alcohol out of view’ order is just part of their campaign to change the image of the resort and they will be looking at all-inclusive hotels as previously promised. 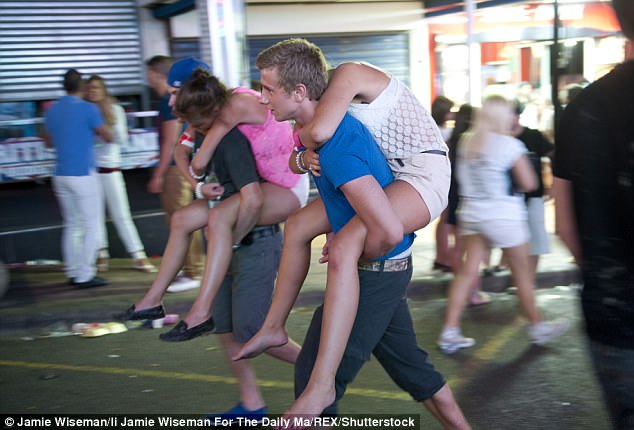 All too much: Local ahtorities want to change Magaluf’s image as a booze holiday destination

This is likely to include a limit on how much alcohol can be served in such hotels and the banning of free bars, two for ones and happy hours.

The order to remove alcohol from shop windows came into force on August 17th and will be followed at the end of this year by the next phase of creating ‘out of sight’ secure rooms.

‘As of December 31st, commercial premises will be obliged to separate alcoholic beverages from the rest of the articles in the interior so that they can be closed or hidden outside the opening hours and no sales to the public from midnight to 8am in the morning as covered by the municipal ordinance for the promotion of coexistence.

‘In addition, there must be posters in the interior where customers are informed of the schedule in which the sale of this type of drinks is allowed,’ said a spokesman for Calvia council.

Calvia council says these new rules might seem tough but they are part of the campaign ‘to put a stop to the tourism of excesses and drunkenness.’

‘In this sense, in addition to the start of closure of premises dedicated to prostitution, among others, the council has asked the Government for measures such as the regulation of the all inclusive hotels, to exclude alcohol, or prohibition in pubs and clubs of offers such as ‘two for one’, ‘happy hours’ or free bars, ‘ said the spokesman.