The Groundkeeper’s Cottage has just opened at fantasy-themed holiday park, North Shire, near Saltburn on the edge of the North York Moors National Park, ahead of International Harry Potter Day on May 2.

The cottage, which cost £195,000 to build, comprises three interlocking circular slate-roofed buildings, two with turrets, and all with stained glass windows. 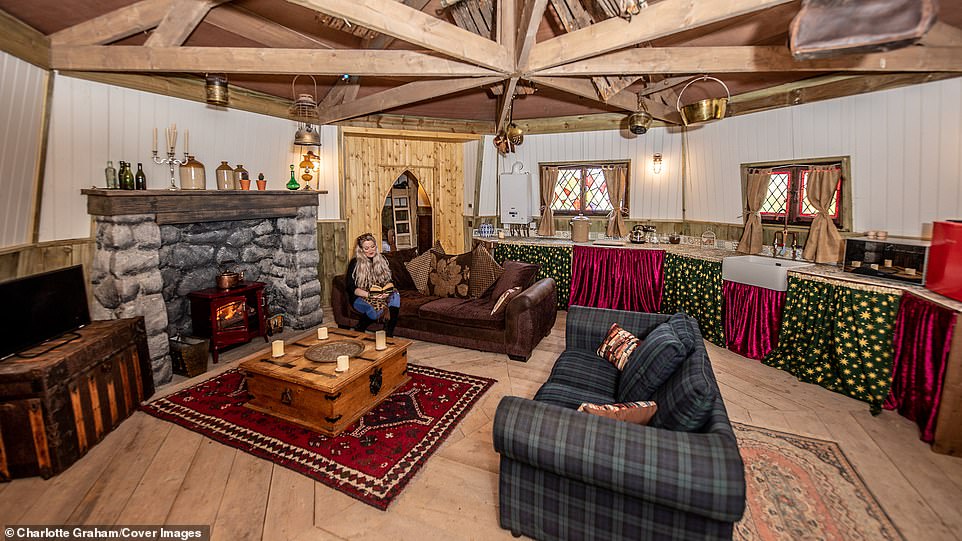 The cottage, which cost £195,000 to build, has an open plan living area with a huge fireplace and Hargrid-style paraphernalia hanging from the wooden beams 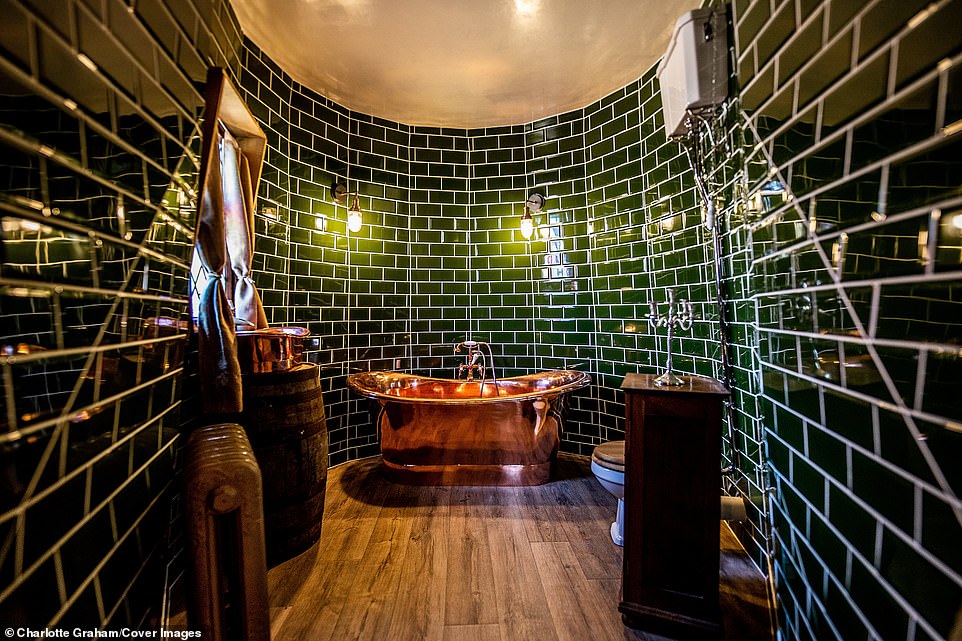 In the large bathroom, the star feature is a huge freestanding copper bath, as well as a bespoke copper basin 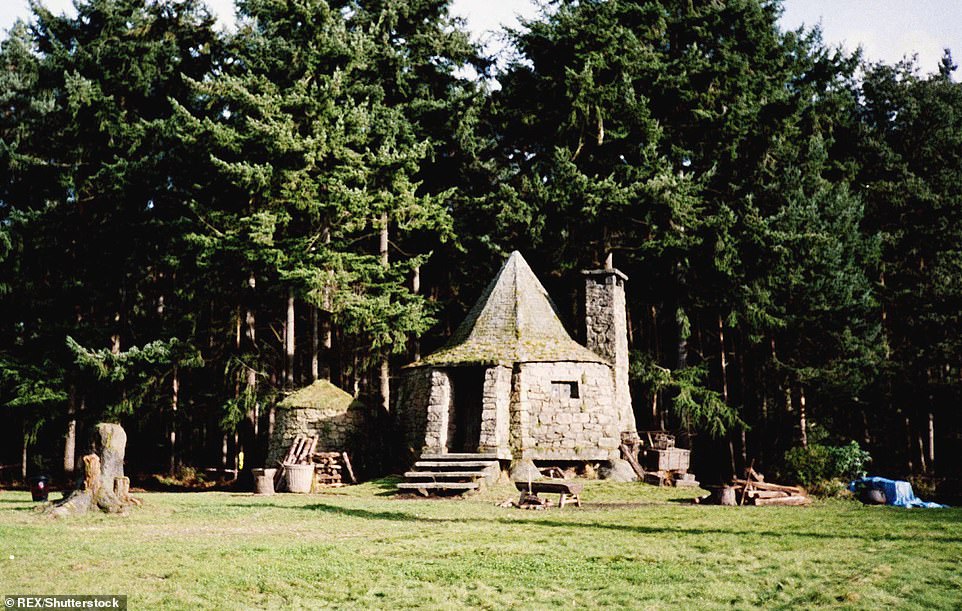 The cottage looks exactly like Hagrid’s hut from the Harry Potter movies, pictured

Guests step through a lantern-lit wooden door before stepping into the spacious open plan living space of a galley kitchen, dining room and living area.

There is also a feature fireplace and wooden beams festooned with Hagrid-style paraphernalia such as old baskets, ropes, leather bags and lanterns.

From the living room, one door leads to the circular bedroom complete with a double bed and a rustic wooden bunk bed, while a second door opens onto a large bathroom where the star feature is a huge freestanding copper bath.

The owner, Harry Potter fan Carol Cavendish, has also incorporated small touches such as an ink bottle and quill and a bespoke copper basin in the bathroom.

However, whereas Hagrid would have lived relatively frugally, guests staying in Groundkeeper’s Cottage won’t have to skimp on life’s luxuries.

That’s because two comfy sofas in the living room together with a sleigh bed and high quality mattresses on the bunk bed make it a cosy, comfortable retreat. 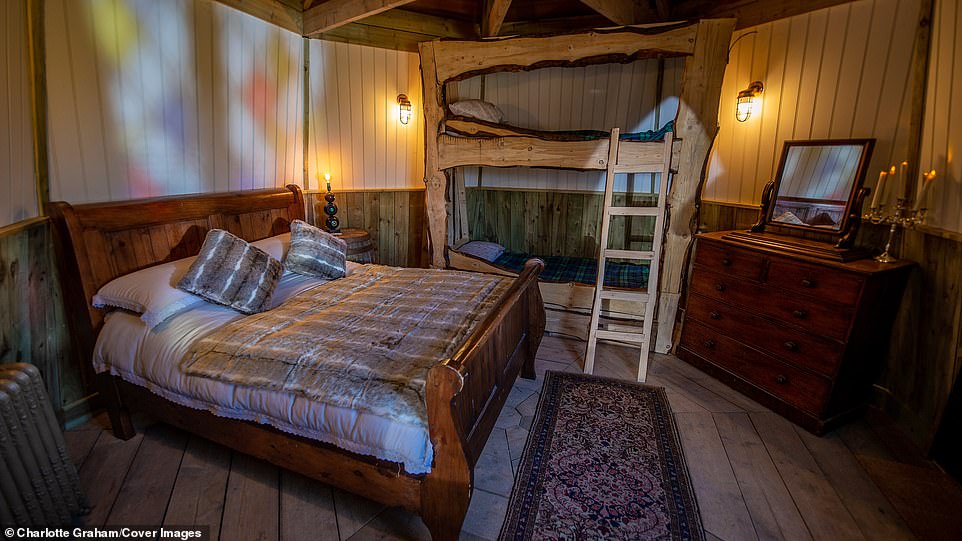 The circular bedroom comes complete with a double bed and a rustic wooden bunk bed. The cottage can sleep up to six guests 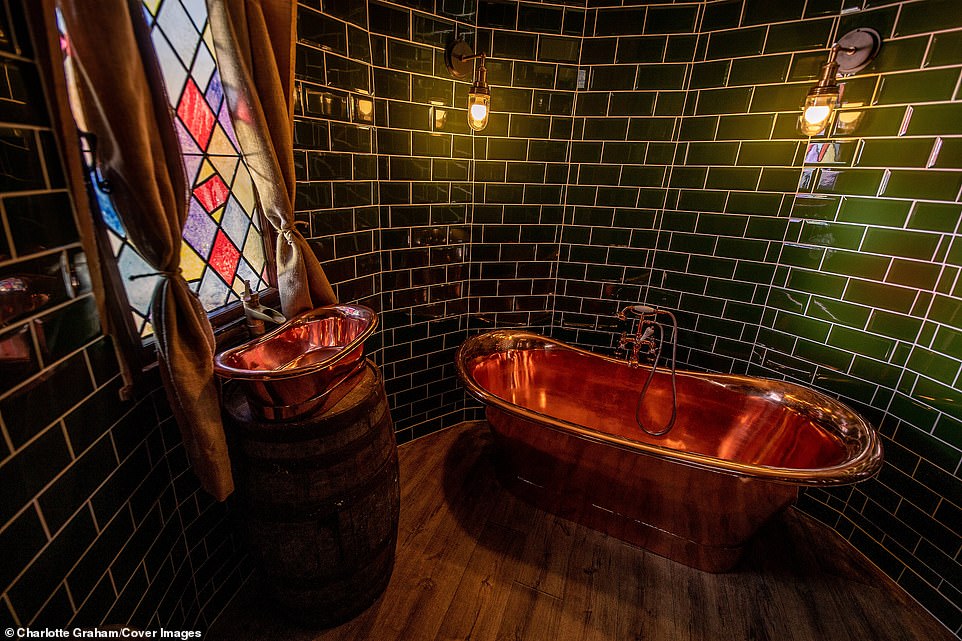 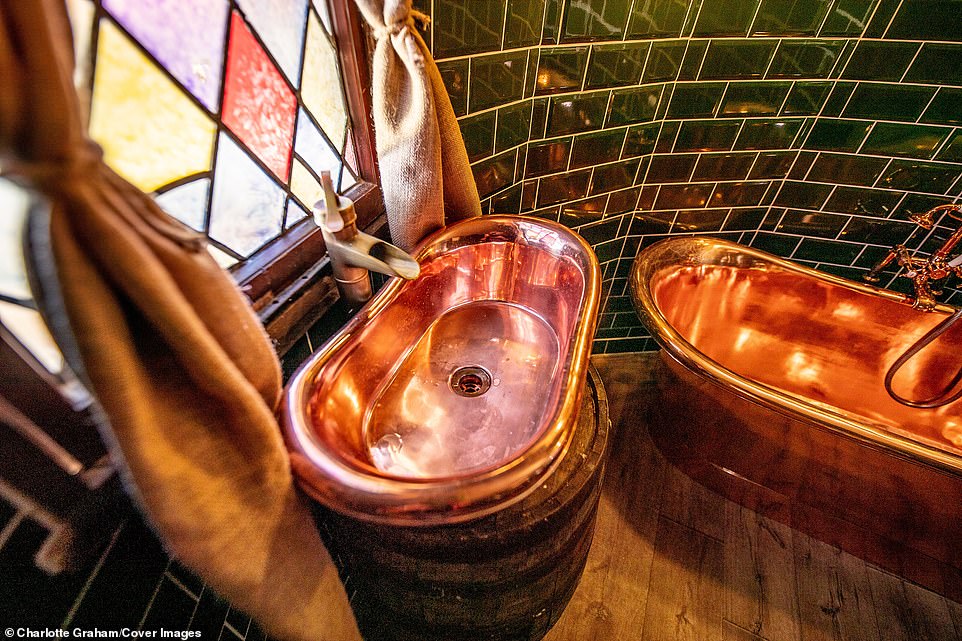 The cottage, which is available for rent from £195 per night, sleeps up to six (four in the bedroom and two on a sofabed). For those who want to bring their own Fang, one well-behaved dog is also allowed at a small extra cost.

The opening of the Groundkeeper’s Cottage is the next stage in North Shire’s vision to create a storybook fantasy world for guests.

Back in 2015, the site opened the Hobbit-hole inspired cottage Potts Corner, designed with a turf roof, round door and stained glass windows, which has since attracted Lord of the Rings devotees worldwide. 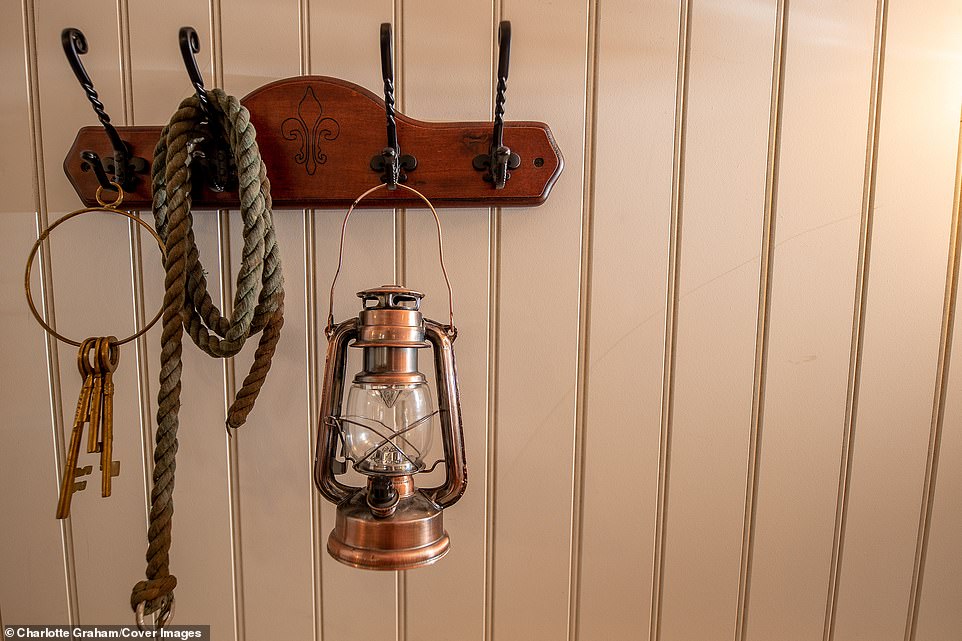 Owner Carol has added little touches around the cottage to remind guests of Hagrid such as lanterns, keys and old rope 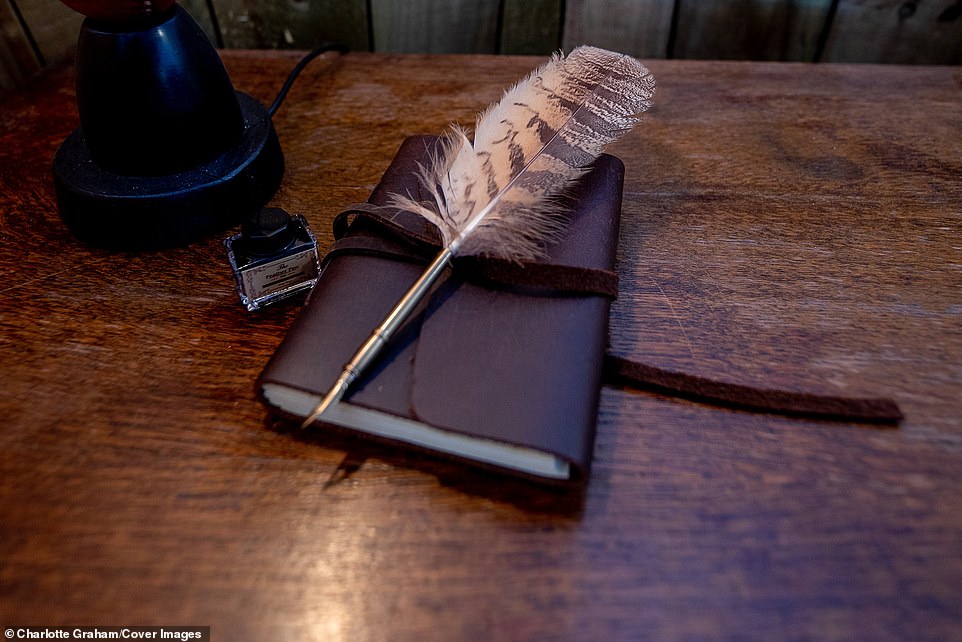 A notebook and quill has also been added to keep up the Hagrid theme. Whereas Hagrid would have lived relatively frugally, guests staying in Groundkeeper’s Cottage won’t have to skimp on life’s luxuries 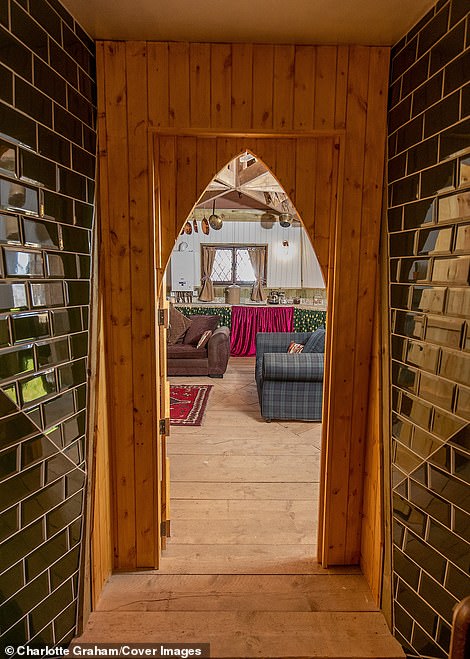 The cottage is perfect for quill-seeking Potter fans

According to Carol, these have included an American basketball player who travelled from London purely to be photographed outside Potts Corner, a New Zealander who stayed in the cottage and had worked on the Harry Potter films, and a couple from the Midlands who donated a Hobbit outfit to North Shire after a week’s stay.

Last year, North Shire also opened a yurt-style Green Dragon cafe inspired by the inn favoured by hobbits in the films and an enchanted barn has been opened for functions.

A storybook cottage, shepherds’ huts, gypsy caravans and tented camping are also available on the quiet six-acre site, which is just seven miles from the coastal fishing village of Staithes.

Carol said: ‘Books have always been an important part of my life even after being diagnosed with dyslexia, which meant I had to teach myself to read.

‘They’ve also helped me through challenging times when I would turn to the Harry Potter and Lord of the Rings books for pure escapism.

‘That’s why it is so fantastic to create an environment where others can also leave behind everyday life and step into their favourite storybook.

‘We’ve seen how Potts Corner has proven to be a hit among adults and children alike and so we’re sure that would-be Hagrids will be heading our way.’ 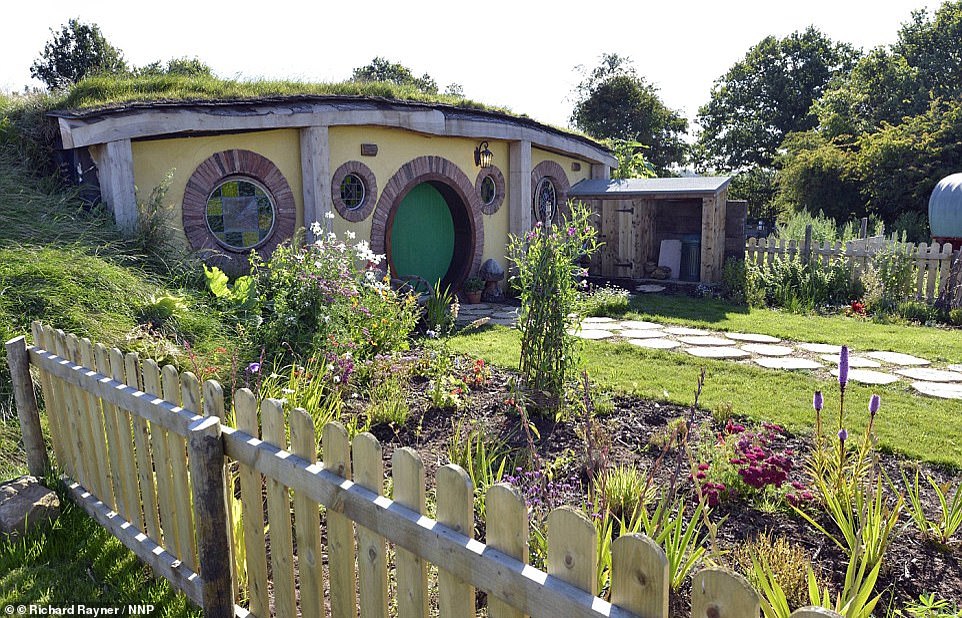