A wealthy magistrate has teed off as controversy continues to swirl after he fought to strip his dead fiancée’s grieving mother of her daughter’s super payout.

Grandfather-of-eight Rod Higgins, 70, sported a beanie with a large pom pom while having a hit with friends in his home town of Shepparton in country Victoria on Saturday.

Mr Higgins has become one of Australia’s most infamous lawmen after receiving the $180,000 super and life insurance payout intended for Ashleigh Petrie’s struggling mum.

The controversy has even sparked disquiet at his local club, with claims that some ‘disgusted’ members want his membership revoked.

Rodney Higgins (pictured) is living a tee-rrific lifestyle after cashing in on his dead fiancée’s $180,000 superannuation fund 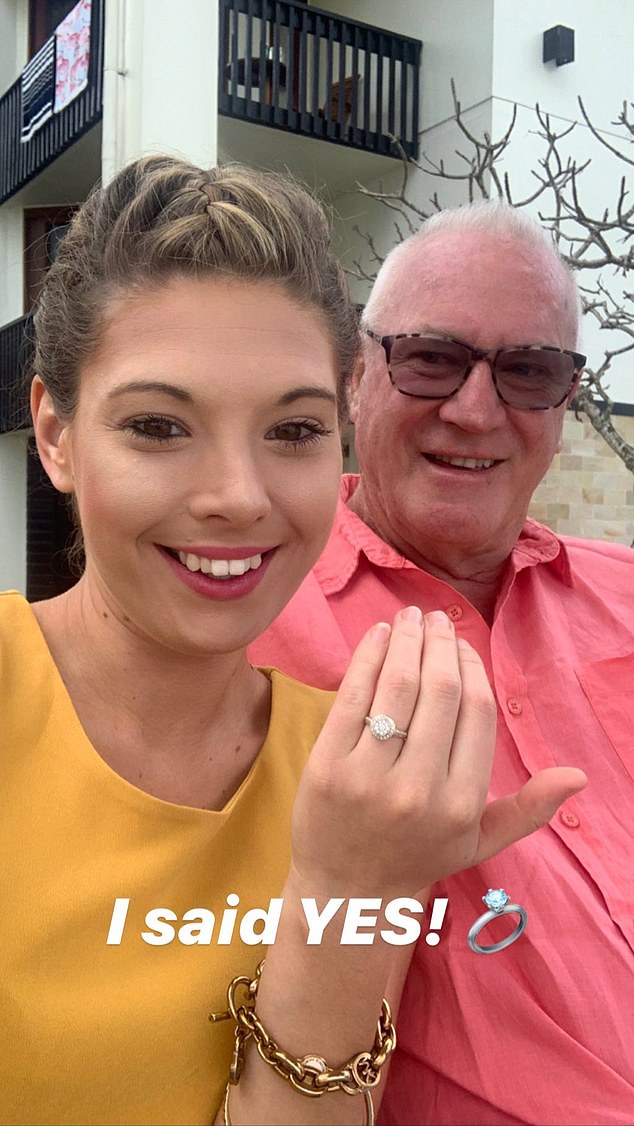 Miss Petrie,23, excitedly accepted and called him ‘the love of her life’ after he proposed to her in Fiji in 2019. The couple is pictured together just weeks before her untimely death 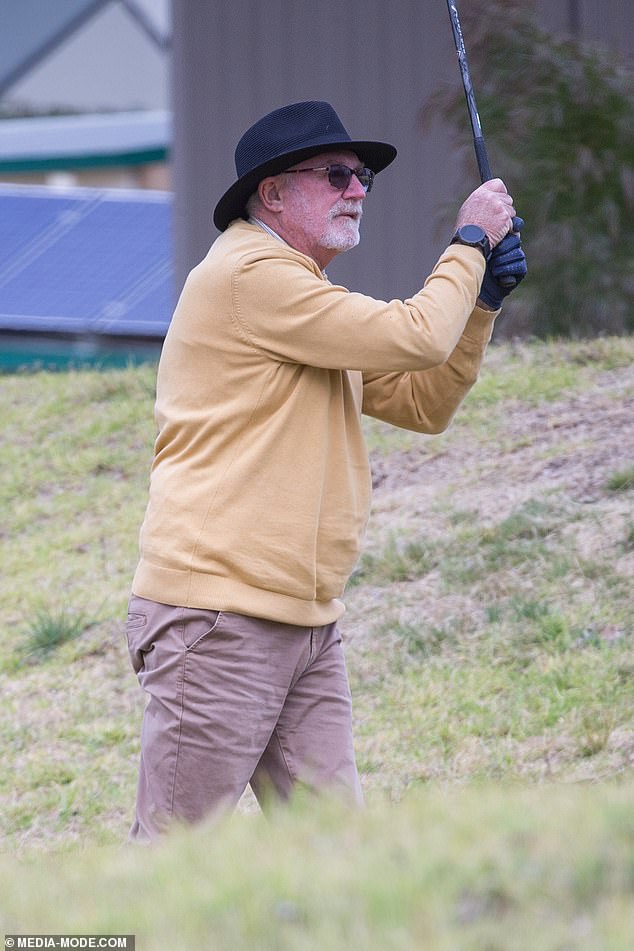 A source told Daily Mail Australia that some members of his local club – including a close former ally – wanted him kicked out in a sign of ‘local feeling against him’, although the club’s regulations did not allow it.

Shepparton Golf Club general manager Russ Powell said he was unaware of any the proposals to revoke Mr Higgins’ membership.

Ms Petrie was just 23 when she was struck by a vehicle and killed on Metung Road near Lakes Entrance in eastern Victoria in October 2019.

She had been engaged to marry Mr Higgins, who reportedly made a grab for her super payout within 24-hours of her death.

On Saturday, Mr Higgins looked every inch the wealthy lawman as he whizzed about Shepparton Golf Course in his sporty red golf cart. 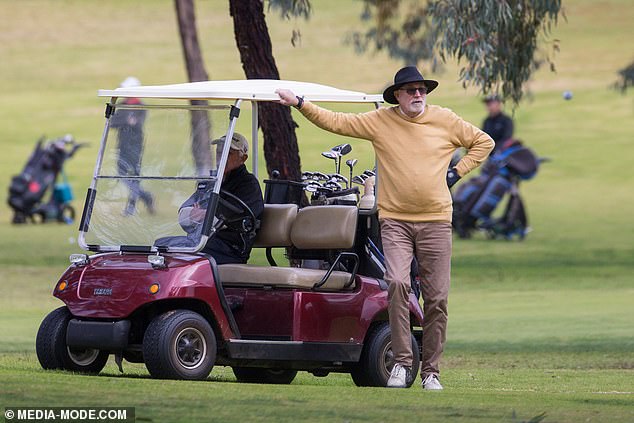 A vehicle to be proud of: Rod Higgins enjoyed a hot of golf on Saturday amid the controversy over his late fiancée’s super money

The flash cart looked in much better shape than the vehicle he had arrived at the course in earlier.

The magistrate clutched a set of keys that was attached to a giant ‘R’ key chain.

Mr Higgins was later seen getting about the course in the same yellow jumper Daily Mail Australia had pictured him in days earlier.

Later in the day Mr Higgins replaced the striped beanie with a black cowboy hat more befitting of a lawman.

The man formerly known as ‘Rocketman Rod’ might have plenty of time for golf in the coming months as speculation mounts his retirement plans have been thrown into disarray.

Daily Mail Australia revealed last week Mr Higgins faces being overlooked for a lucrative post-retirement gig that would have netted him as much as his super payout each and every year for at least a decade.

The magistrate has just weeks to serve out before going into retirement. 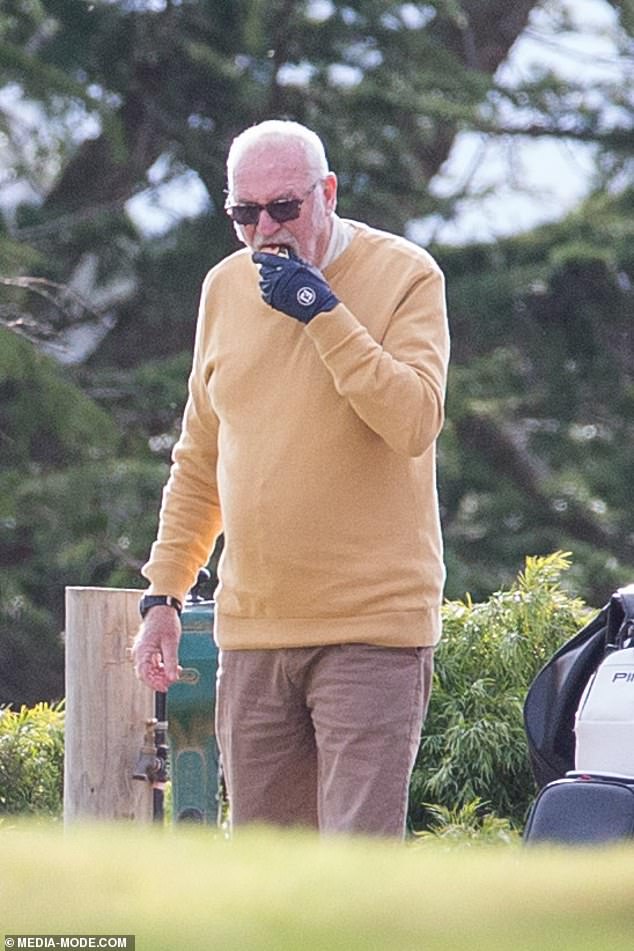 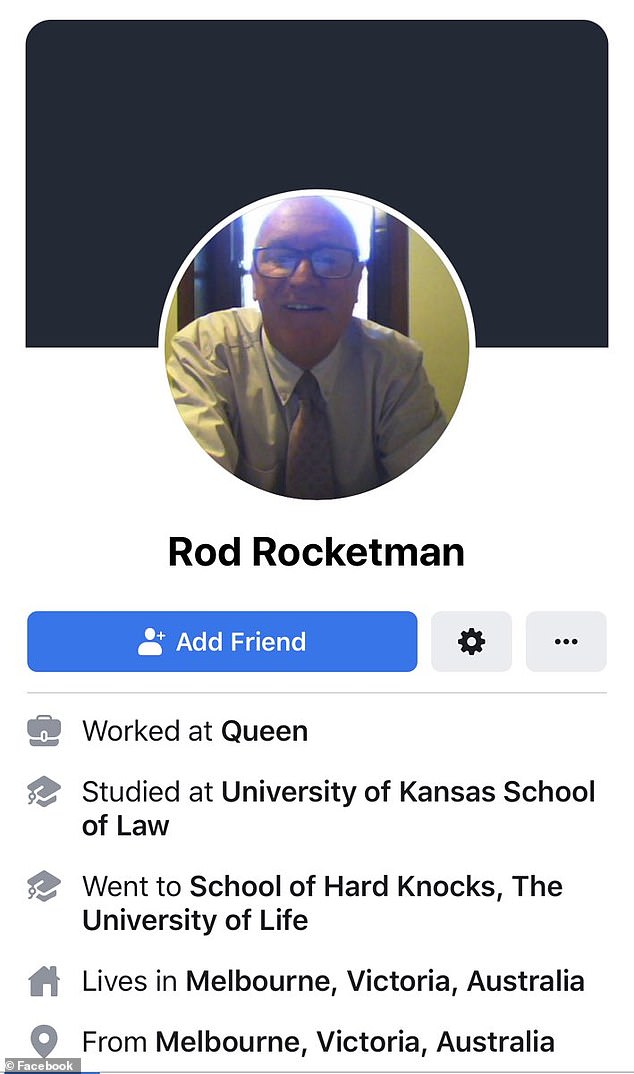 Mr Higgins and Ms Petrie had been living together in Mirboo North, four hours from Shepparton in northern Victoria, when tragedy struck.

Her death sparked an outpouring of emotion and anger at the fact her relationship was made public shortly before her death.

Sources have claimed Mr Higgins had asked Ms Petrie’s family to destroy her phone shortly after she was killed.

He was later accused of performing a ‘bizarre’ eulogy at her funeral which left already shocked mourners beside themselves with anger.

Mr Higgins had been living with the 23-year-old for about 12 weeks when she was hit and killed by the car.

He remains employed as a magistrate earning $324,000 each year until he retires in the next few weeks. 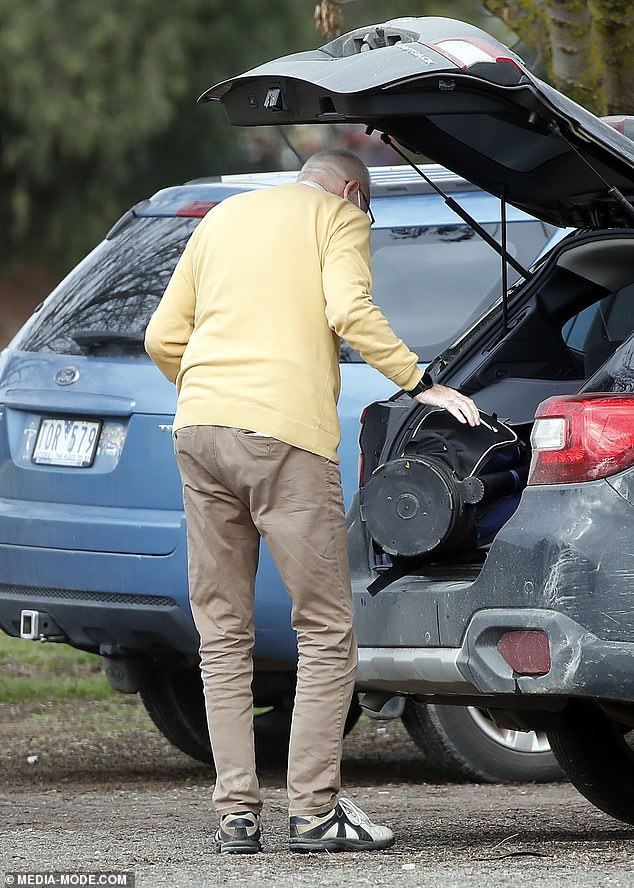 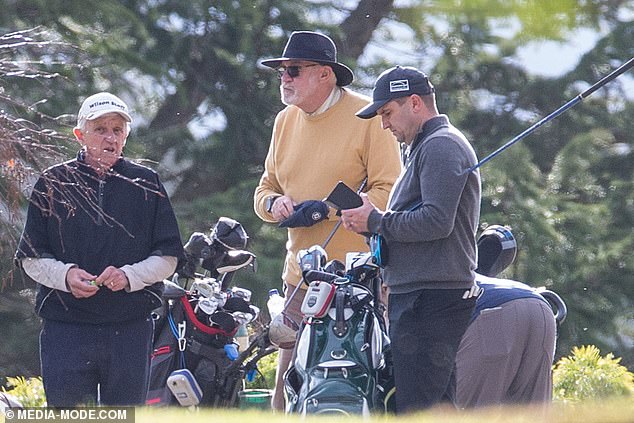 Mr Higgins had indicated his desire to continue working as a reserve magistrate, earning $1,380 a shift.

Retired magistrates continue working for years, covering weekend and fill-in positions for as long as they are physically able.

Over the course of a year, a reserve magistrate could earn more than $180,000.

Calls from angry Australians to have the magistrate removed soared upon news of the cash grab breaking.

In Victoria, only Parliament has the power to sack judges and magistrates.

The Magistrates’ Court Of Victoria did not respond to Daily Mail Australia’s inquiries about Mr Higgins’ future last week.

Sources have said pulling the magistrate’s lucrative retirement plans from underneath him could be considered the next best option.

On Monday, more than 15,000 Australians had signed a petition demanding the super fund give the cash to Ms Petrie’s mother, as per her wishes. 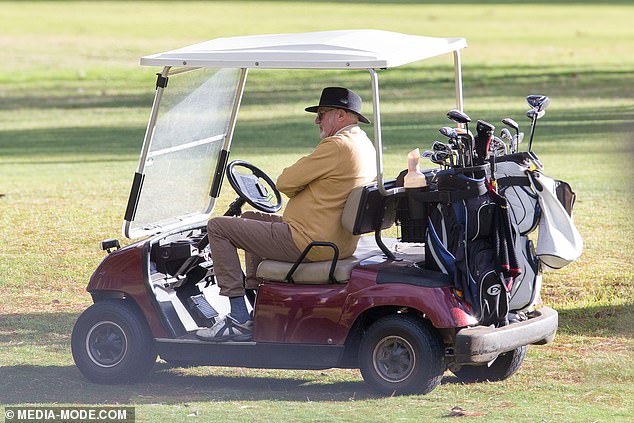 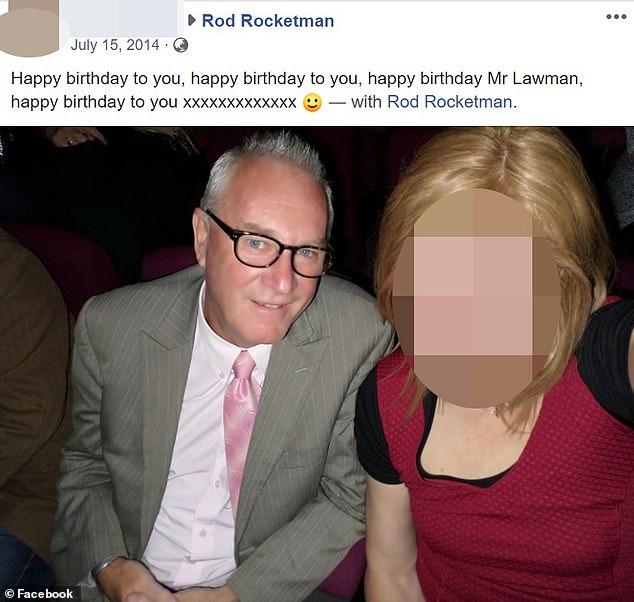 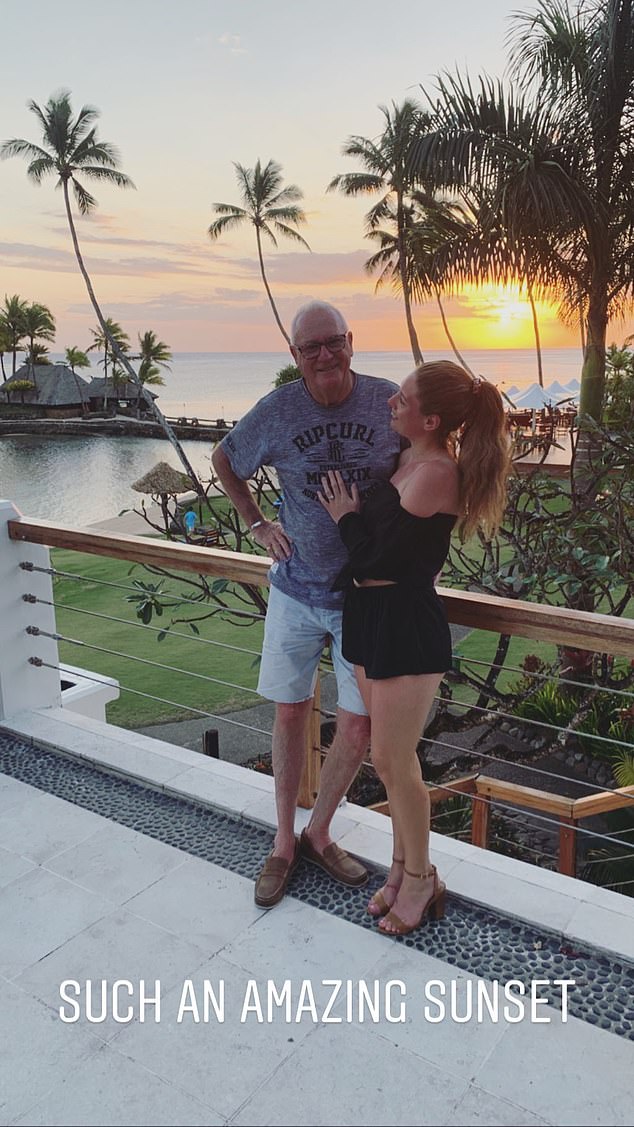 Mr Higgins proposed to Ashleigh Petrie (pictured together), from Mirboo North in Victoria, during a romantic trip to Fiji months before she died

2016-17: Rod Higgins and Ashleigh Petrie meet living next door to each other in Shepparton, Victoria

2017: She is a guest at a party celebrating his appointment as magistrate

2018: The two start a secret relationship under the nose of his second long-term partner

Early 2019: Court colleagues are shocked to discover the relationship and raise concerns. Mr Higgins is moved to another court far away

September: Mr Higgins proposes during a romantic trip to Fiji

October 9: News of their relationship, engagement, and colleague concerns breaks in the media

October: Mr Higgins’ ex-partner controversially gets a restraining order against Ms Petrie with allegations of bias against chief magistrate who granted it

October 28: Ms Petrie is killed when she is hit by a car as a pedestrian. He death was ruled a suicide by a coroner.

She had bequeathed the entire balance and death benefit to her mum, but Mr Higgins successfully argued he was her ‘dependent’ and therefore entitled to her super payout upon her death.

After Ms Petrie’s death, Mr Higgins moved back to the riverside home in Shepparton he shared with his former partner, Lurline Le Neuf, to resume their 18-year relationship.

On Tuesday, the pair were seen sauntering about town in pricey duds looking every inch the millionaire couple.

It is understood Mr Higgins had become aware in her final days that his young fiancé had been the unnamed source in articles surrounding their own relationship.

A coronial inquest later ruled Ms Petrie had taken her own life, but the investigating coroner determined that the finding would not be published.

News of the couple’s relationship had only become public weeks earlier, which saw the nation’s left-leaning press blame the Melbourne tabloid that broke the story for Ms Petrie’s tragic demise.

But the young clerk had not only been in on the story, she had been actively feeding the journalist information on a court workplace she had described as ‘toxic’.

Ms Petrie had been in close contact with the reporter up until just days before her death on October 28, 2019.

Ms Petrie had told the publication she had been sleeping with another elderly magistrate for up to a month before she moved onto Mr Higgins. 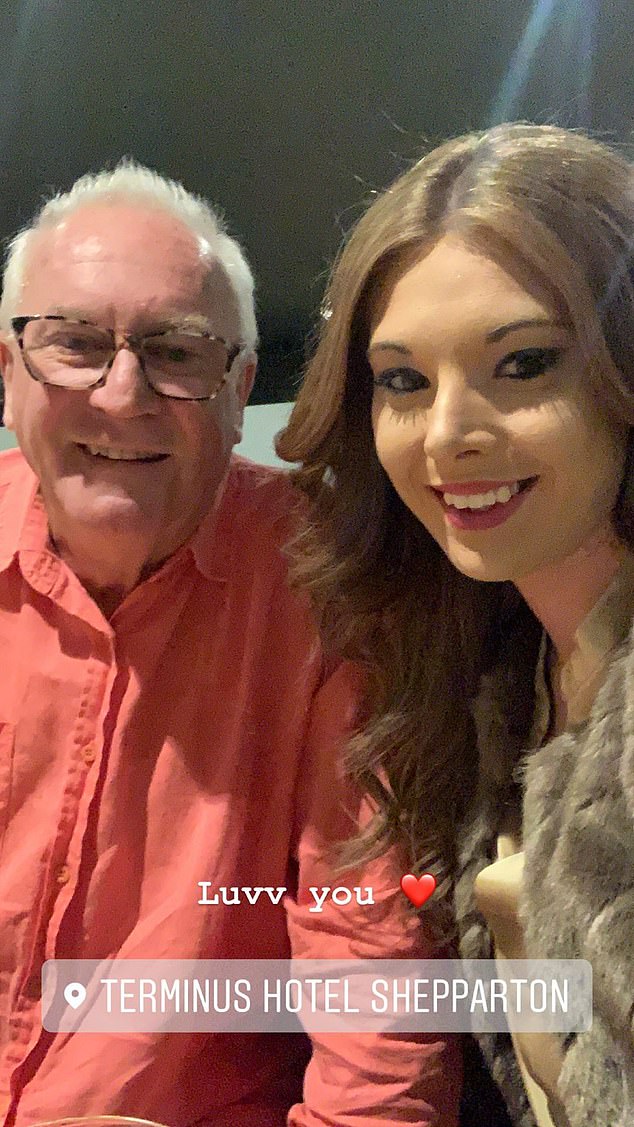 In happier days: Ashleigh Petrie and Rod Higgins at the local pub. She often took to social media to inform friends of her love 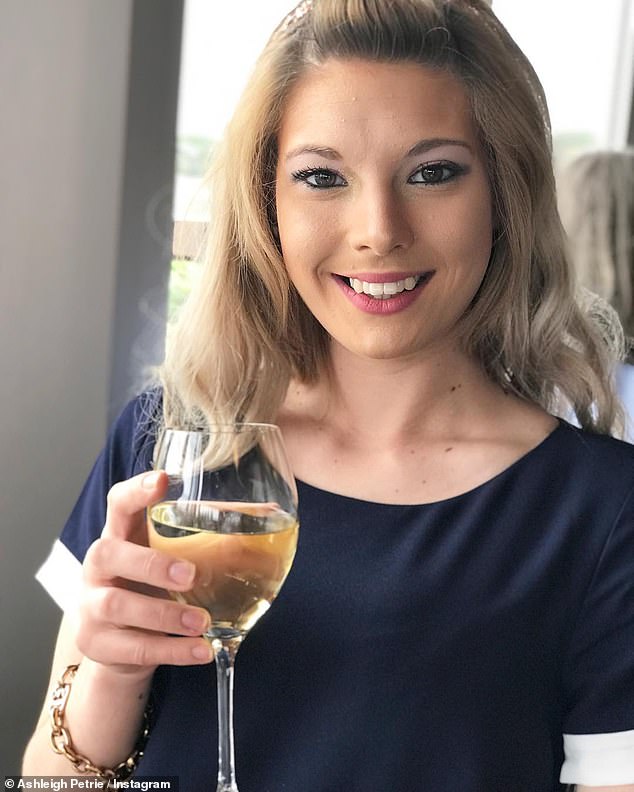 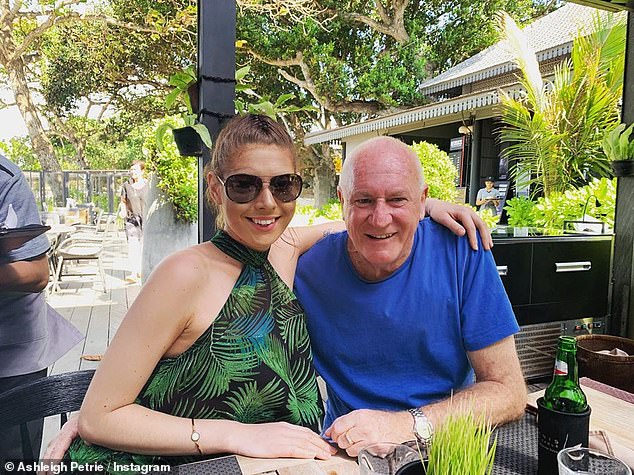