Magnitude 9 earthquake off coast of Japan is due this century, experts warn

A devastating earthquake that could cause a tsunami up to 100ft high to sweep across the east coast of Japan is ‘imminent’, government experts have warned.

They found that a major tsunami had struck the region every 300 to 400 years with the last one hitting in the 17th century, meaning a new one is due before the end of the century – though stressed it is impossible to say exactly when it will strike.

Japan faces the ‘imminent’ risk of a devastating magnitude 9 earthquake that would cause a tsunami up to 100ft high off its east coast, researchers have warned (pictured, the aftermath of the 2011 quake which was also magnitude 9)

The devastation caused by the quake – measuring up to magnitude 9 – would be at least as severe as the 2011 disaster that killed more than 15,000 people and caused a meltdown at the Fukushima Daiichi power plant, their research indicated.

The northern island of Hokkaido would be hardest-hit along with the northern part of Honshu, including the Fukushima plant which would be submerged a second time.

Seismologist Kenji Satake, who led the study, said physical barriers would be useless against such a large wave and the best defence would be to run.

Researchers estimated that the government would have around half an hour between the quake and the wave hitting shore to get people to safety.

For the study, experts were asked to analyse the impact of a large earthquake hitting the Japan Trench or Kuril Trench which scar the seabed off the country’s east coast.

The 2011 quake also struck the Japan Trench, but this time analysts focused on a different area that has not been hit recently, the Japan Times reported.

While they could not predict exactly when the quake would strike, researchers said one will hit at some point. 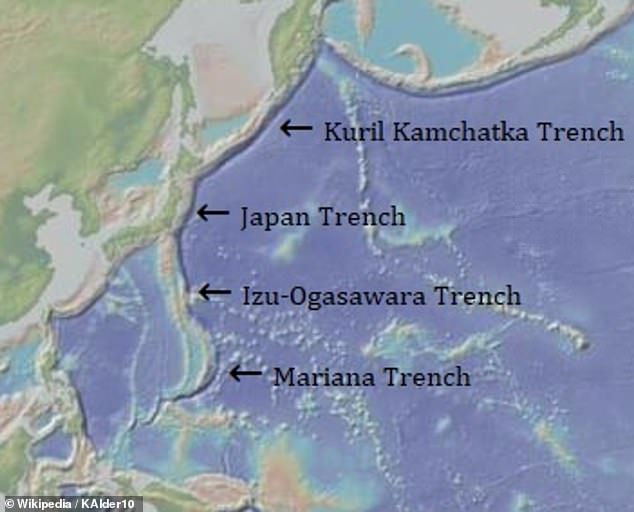 Experts predicted that a major earthquake in the Kuril trench or Japan Trench, off the country’s east coast, would cause a wave so large that physical barriers would be useless – with the best defence being to run

When such a quake does strike, they predicted that Erimo Town, on the island of Hokkaido, and Miyako City, in Iwate Prefecture, would be the hardest-hit – with wave height there reaching 100ft.

The wave would then push as far south as Chiba prefecture, next to Tokyo, though would not impact the city itself.

The Fukushima Daiichi nuclear power plant would face being submerged by a wave up to 65ft high as it slammed into the coast.

Meanwhile tremors from the quake itself could reach up to intensity 7 on Japan’s shindo scale.

At this level, people may be thrown into the air, it becomes impossible to walk without crawling, reinforced concrete walls may collapse and unsecured furniture will be thrown around.

Researchers did not investigate what the impacts would be on the human population, though their study indicates it would be comparable to the 2011 quake. 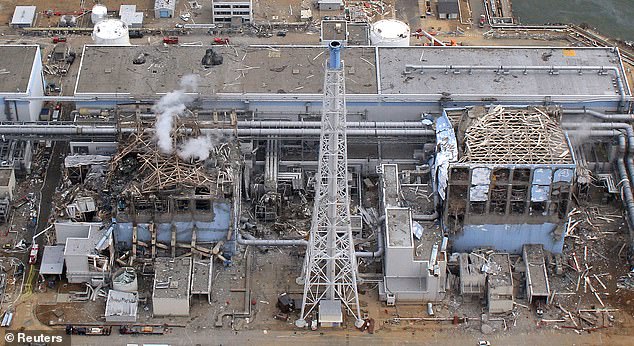 The Fukushima Daiichi nuclear power plant, which suffered a catastrophic meltdown after the 2011 earthquake (pictured), would likely be submerged a second time, they said

Japan’s 2011 earthquake struck close to the Japan Trench off the coast of Tōhoku at magnitude 9 on March 11.

It is the most powerful earthquake ever recorded in Japan, and the fourth most powerful quake recorded anywhere in the world since records began in 1900.

The quake caused a tsunami up to 130ft high, which killed some 15,000 people and caused damaged estimated up to $235billion – making it the costliest natural disaster in recorded history.

The Japanese government has now established a working group to investigate the findings and will publish recommendations for how to deal with such a disaster by March next year.