A tiding of magpies have taken over a Brisbane backyard in scenes reminiscent of a famous ’60s horror flick.

The 50 magpies can be seen strewn across the lawn in footage that re-emerged on social media on Tuesday.

‘The most magpies I have ever seen in one place at one time,’ the video was captioned.

The footage taken in the spring of 2019 in the Queensland capital was eerily similar Alfred Hitchcock’s 1963 horror film, The Birds.

Those with Ornithophobia, a fear of birds, would be cringing at the sight of the huge parliament of magpies.

Hitchcock’s popular film played on the common fear as a people in the town of Bodega Bay are attacked by large flocks of vicious winged animals.

Magpies source their food from the ground, eating worms, grubs and a variety of other invertebrates.

The Brisbane backyard must have been a healthy feeding ground as the birds congregated around a particular hill.

One user wrote: ‘Glorious, but don’t be riding your bike that way in a couple of months’.

Another commented: ‘Must be some sweet real estate for them around your joint, I’ve never seen so many anywhere on the East Coast’.

Magpies live in territorial groups, which are large enough to defend their territory.

The native birds are feared during the springtime breeding season.

The flock of magpies in a Brisbane backyard that social media users have linked to a scene out of Alfred Hitchcock’s 1963 horror film, The Birds

Magpies swoop at perceived intruders in an attempt to protect their young.

Two people were severely injured in magpie attacks in Australia in 2020, with one person left with a serious eye injury that required emergency surgery.

James Glindemann, 68, was sitting on a park bench near the Gippsland Shopping Centre, in eastern Victoria, on October 13 eating Chinese for lunch when a young magpie appeared at his feet.

‘It looked at me and I didn’t give it any food, so it just attacked me,’ he previously told Daily Mail Australia.

‘First it struck my left eye and when it landed back on the ground, I didn’t drop my food and so it attacked me again in the right eye.’ 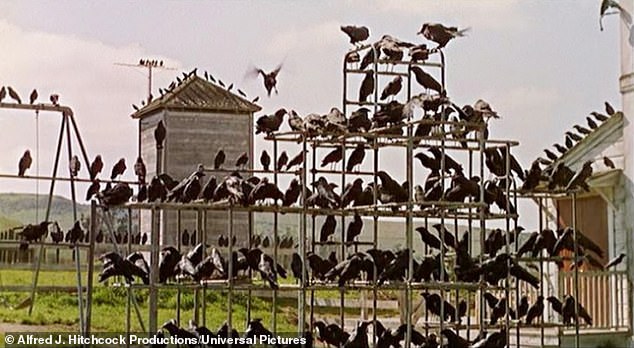 This scene from Alfred Hitchcock’s film is eerily similar to the Brisbane backyard captured, as more than 50 magpies flocked together