A young maid working for a prominent Lebanese family was told she would be killed and her corpse sent home, her distraught mother claims.

Lensa Lelisa, 20, last month claimed fashion designer Eleanore Ajami and her children horrifically abused her since she started working for them in July.

The Ethiopian woman was so desperate to escape she jumped off the second-floor balcony of their Beirut home, breaking both her legs and injuring her face.

Lensa Lelisa, 20, recounted claims of her horrifying ordeal in a video, saying she was beaten with an electric cable, dragged around the room by her hair, and her head smashed into walls 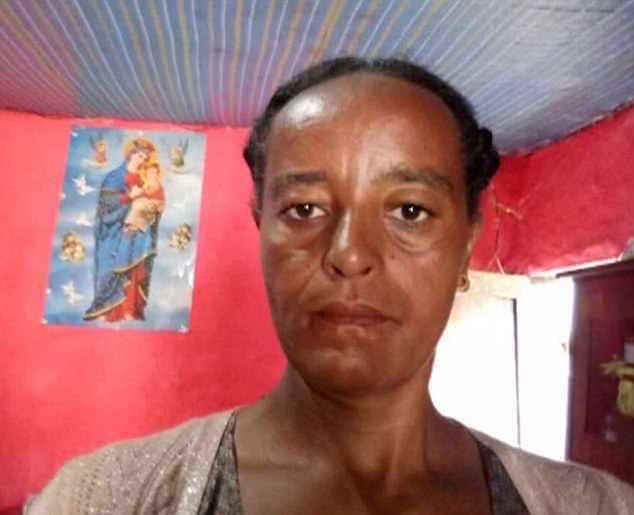 Ms Lelisa was told she would be killed and her corpse sent home, her distraught mother (pictured) claimed as she spoke publicly for the first time

Speaking for the first time, her mother said she didn’t hear from Ms Lelisa for five months after she arrived because she wasn’t allowed to call home.

‘She called me to say she was distressed and she couldn’t find a way out,’ she said in a video posted to Facebook and translated by activist group This Is Lebanon.

‘Lensa told me she was suffering and that her employers hit her. I was at a loss of what to do.’

Ms Lelisa’s mother said she asked the domestic worker agency to take her out of Ms Ajami’s home ‘before she dies there’ but it never happened.

‘I am just grateful god spared her life. Her employer told her that all we want is money, and that she would kill her and send her corpse back home,’ she claimed. 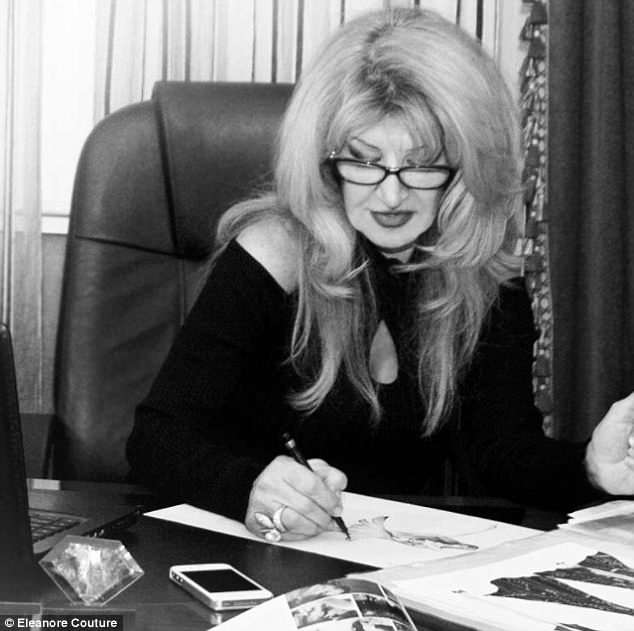 ‘My mind can’t find any rest or solace. I miss her, I want to hear her voice.’

Ms Lelisa recounted claims of her horrifying ordeal, allegedly at the hands of Ms Ajami and her adult children Alexis, Crystel and Joe Khalil, in a video posted online.

‘They beat me with an electric cable, dragged me around the room by my hair, and smashed my head into walls,’ she said.

Lensa Lelisa’s aunt Ganesh filmed her talking about her alleged abuse as she recovered in Serhal Hospital outside Beirut on March 19.

The young woman claimed she was beaten on a daily basis by all four family members and wasn’t allowed to leave the house for any reason.

‘Every hour there was some form of torture and I couldn’t do anything to save myself,’ she said. 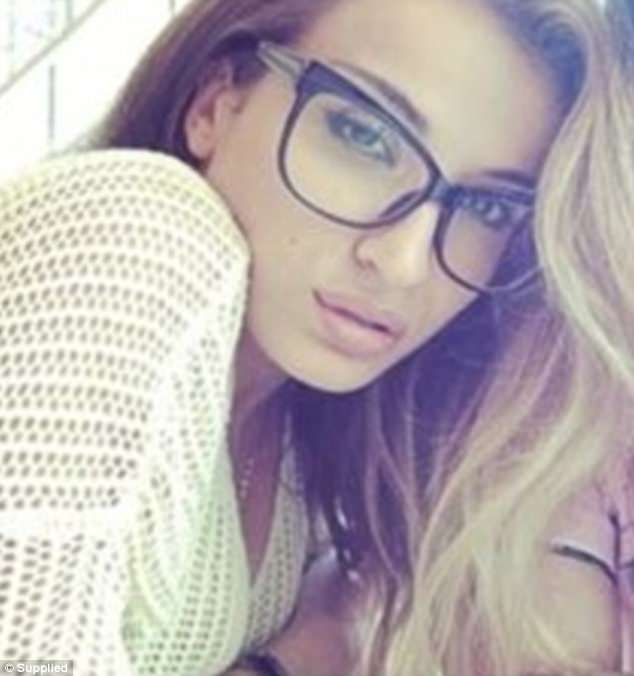 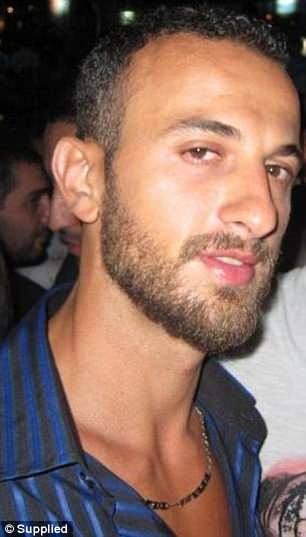 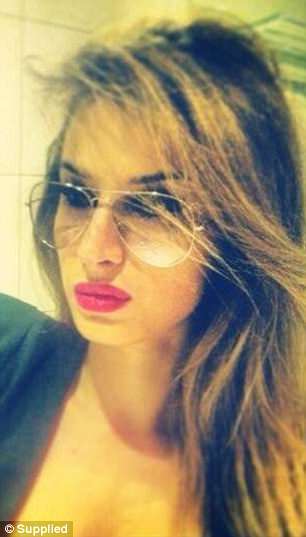 Ms Lelisa alleged Joe Khalil (left) often dragged her by her hair, would push his fingers into her eyes, and she was also abused by his sister Alexis (right)

Ms Lelisa alleged Joe Khalil often dragged her by her hair, would push his fingers into her eyes, and along with his sister Crystel would attack her with scissors.

After Joe threatened to hurt her if she didn’t do enough sewing while he was out playing sport, she decided to escape along with another Ethiopian maid.

The frightened girl jumped first and broke both her legs on impact, forcing the other maid to abandon her escape plan.

‘I thank god that I didn’t die and that I’m ok,’ she said in the video.

‘I have experienced a lot of abuse but nobody sees me and nobody helps me. If we talk about our problems they will hurt us even more.’

The young woman is one of 100,000 Ethiopians employed as domestic workers in Lebanon through the controversial Kafala system.

Workers usually have their passports confiscated and are essentially indentured to their employer who controls their visa. 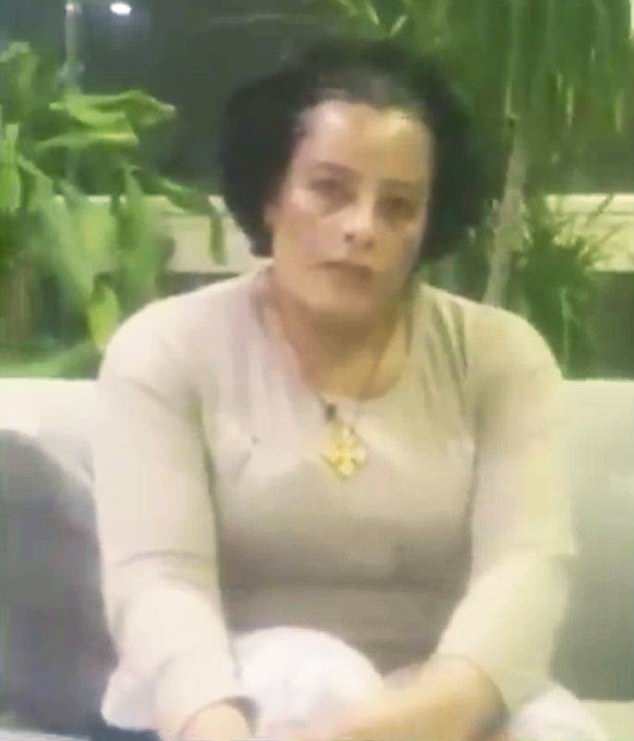 Ms Lelisa’s aunt Ganesh said she was never allowed to be alone with Ms Lelisa when she visited after the story of her alleged abuse broke, and her niece only denied it later out of fear 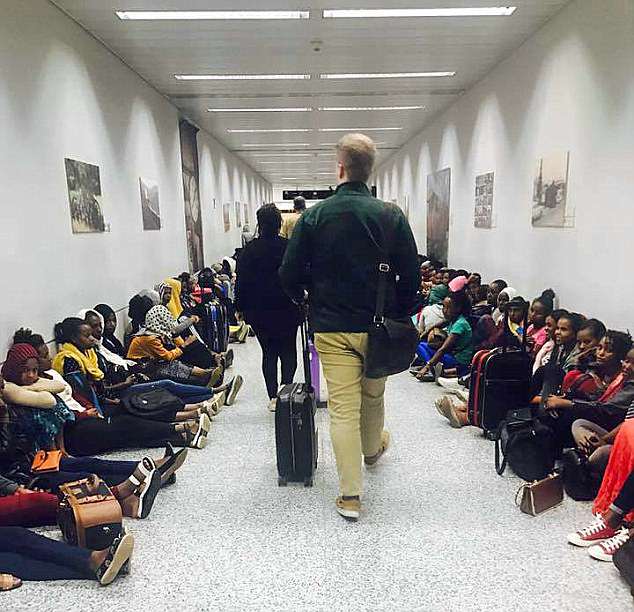 Ms Lelisa told Lebanon’s Internal Security Force she ‘fell down while she was cleaning’, according to the Ethiopian Embassy.

The ISF wrapped up its investigation earlier this month and said it found no evidence of abuse or human trafficking in Ms Lelisa’s case.

The young maid was returned to her employers on March 26 and the next week appeared on Al Jadeed TV along with Crystel and the family lawyer.

Strapped to a stretcher and still appearing badly injured, she recanted her claims of abuse and apologised to the family.

Alexis then posted on Facebook saying staff were treated as family and Ganesh was allowed to visit her niece and agreed the claims in the video were ‘with much exaggeration and far from reality’.

However, Ganesh then appeared in another video denouncing this version of events and saying she was never allowed to be alone with Ms Lelisa.

‘They were beating her up every day until her nose and mouth bled,’ she said.

A source close to the family further explained that Ms Lelisa didn’t tell investigators her story out of fear.

‘[Her aunt] spoke to her after and [Ms Lelisa] said she had said this because her boss threatened to kill her,’ they told MailOnline.

‘Her family are very worried about her and anxious to see her.’ 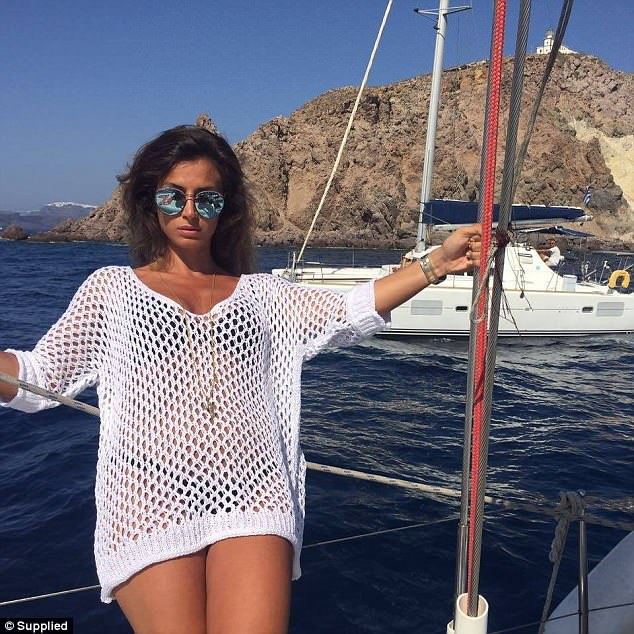 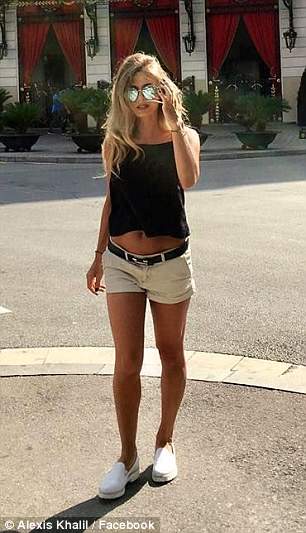 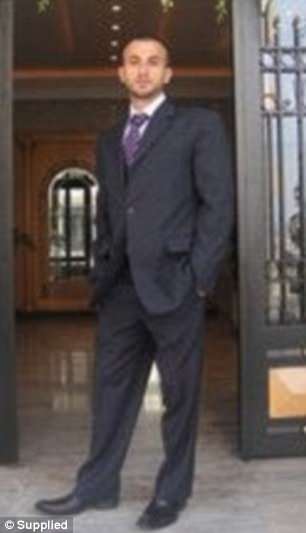 After Joe (right) threatened to hurt her if she didn’t do enough sewing while he was out playing sport, she decided to escape along with another Ethiopian maid

They said the girl was later interviewed by Catholic aid organisation Caritas, but she was again unable to speak up because Ms Ajami was present.

Human Rights Watch opened an investigation into the case and also believed Ms Lelisa only recanted her claims out of fear.

‘Given the risk of coercion, the investigation should ensure that Ms Lelisa can give an accurate account of what happened to her, in a safe location away from her workplace, without fear of retaliation.’ deputy Middle East director Lama Fakih said.

‘We are deeply concerned that even though Lelisa said she feared retaliation and has reported death threats, investigators said they did not provide safety guarantees when they interviewed her.’

HRW Beirut researcher Bassam Khawaja said it would be difficult for Ms Lelisa to bring a lawsuit if as her legal status in Lebanon was tied to her employers.

‘Unfortunately we’ve been documenting this for a long time – ISF and the judiciary don’t really take these cases seriously, they make pro-forma investigations,’ he said. 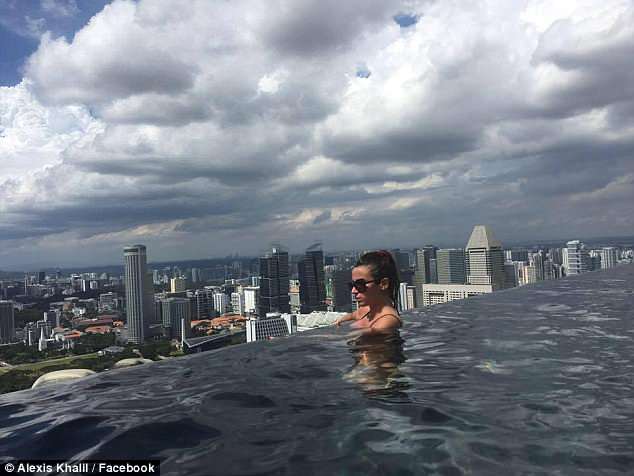 The young woman is one of 100,000 Ethiopians employed as domestic workers in Lebanon through the controversial Kafala system to work for locals like Alexis Khalil (pictured) 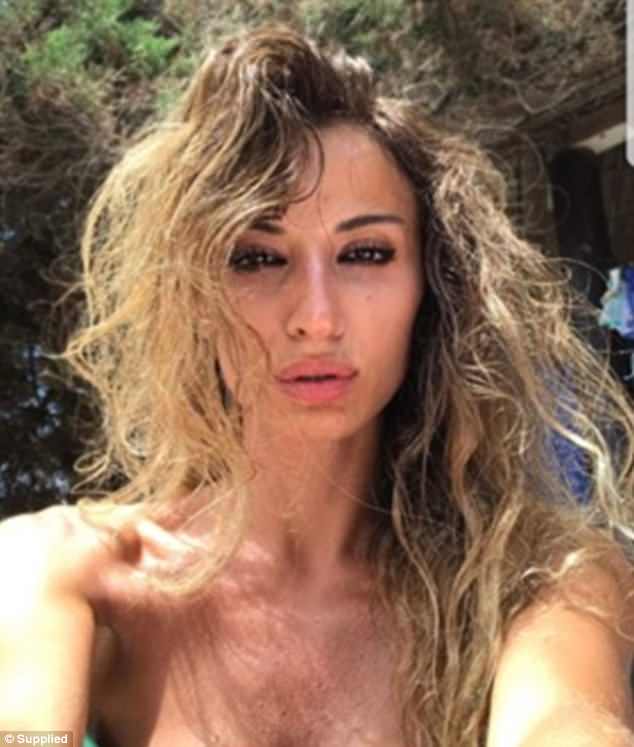 Lebanon’s General Directorate of General Security, the agency in charge of foreigners’ entry and residency was also investigating.

Alexis Khalil commented on the March 19 video after it was uploaded to Facebook, defending her family.

‘It is unfair to defame our reputation and our business reputation without verifying the authenticity of the video and if the truth is said without any pressure or exaggeration,’ she said.

‘Lensa is getting better now and in safe hands. She will go back to her family in Ethiopia.’

The other family members took down their social media accounts, including that of Eleanore Couture, and have not yet responded to requests for comment. 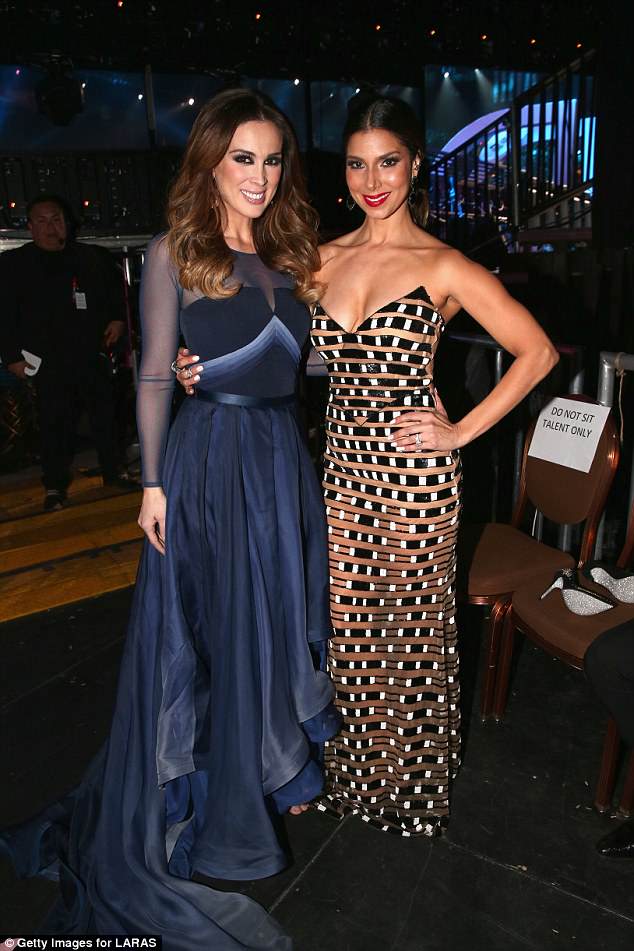 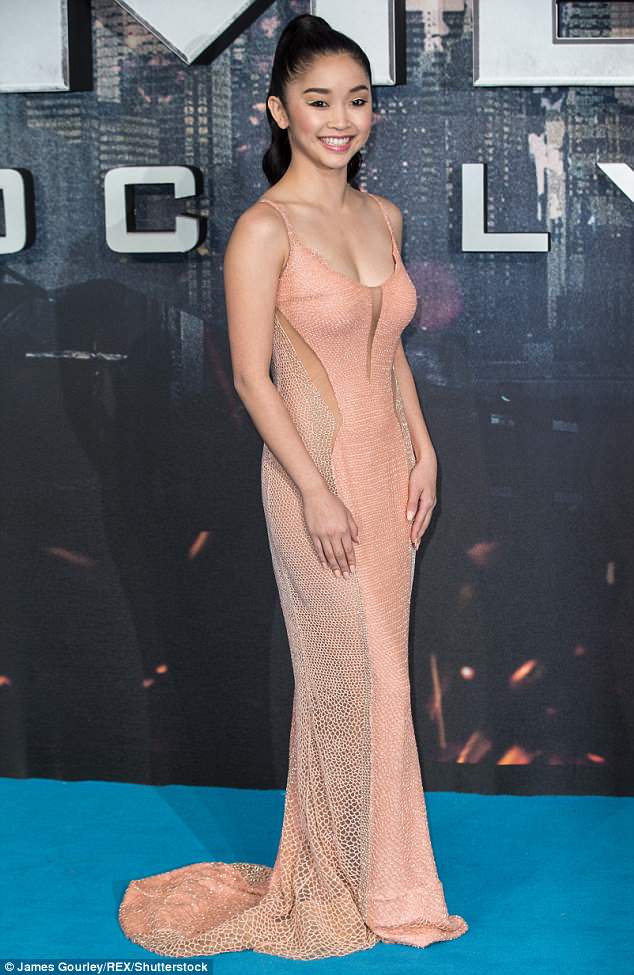 Sanchez ironically starred in Hollywood film Traffik, which came out on Friday, in which human trafficking was a central theme.

Her publicist said: ‘Sanchez had absolutely no idea about this situation and is very sorry that her name and likeness has been used to promote the mentioned clothing line.

‘She is dressed by several stylists for her events and they bring her all kinds of designers from all over the world. I’m sure nobody on her team had knowledge of this atrocity.’ 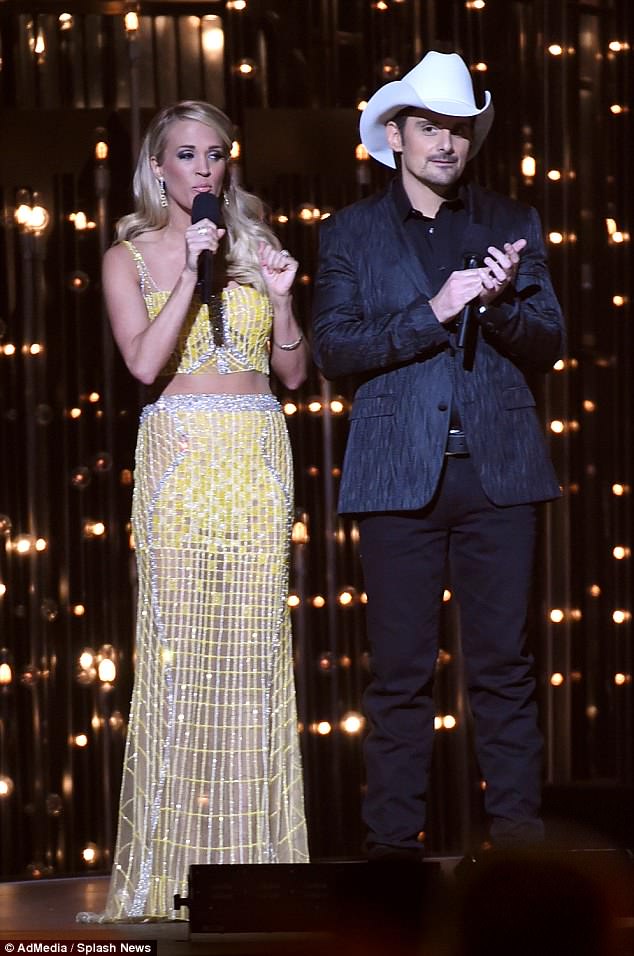