A stunned landlord recovered his flat only to find it buried in empty cans, food wrappers and cigarette packets.

The shocking pictures reveal how a tenant from hell lived for several years, with so much rubbish piled up in the property he couldn’t see the floor.

Graham Holland from Maidstone, Kent, said he thought he was in a horror film when he walked into his flat in Sittingbourne last summer, after twelve years of being unable to access it.

The 56-year-old electrician said: ‘It was a complete and utter shock and disbelief that anybody could live in such a mess.

‘I honestly thought I was in a horror film.’

Graham Holland from Maidstone, Kent, was stunned to discover hundreds of empty beer cans in the house he’d rented out 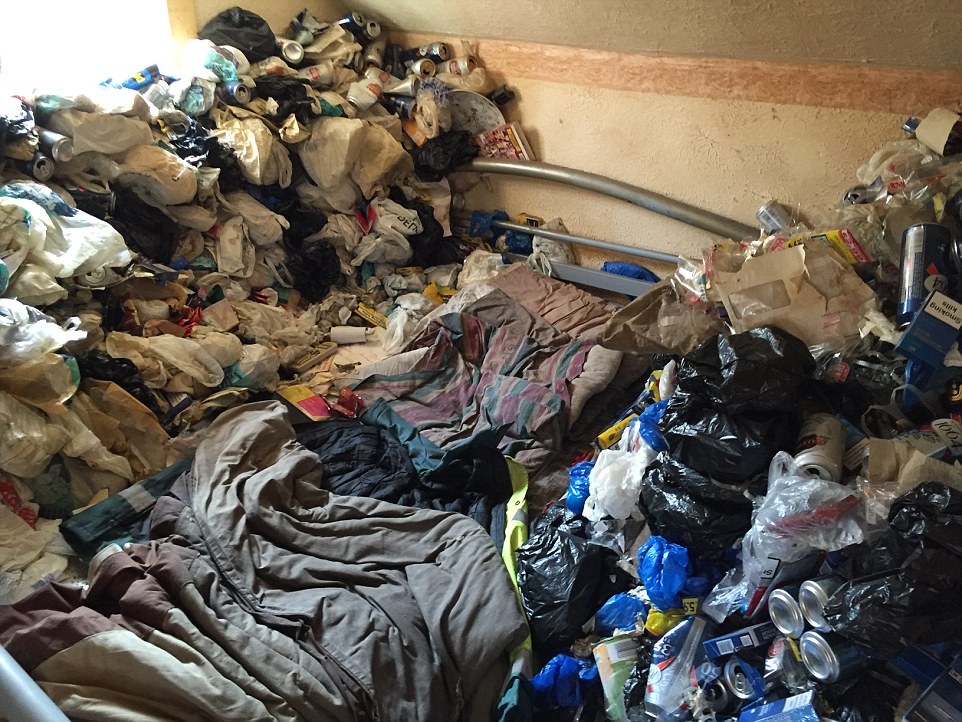 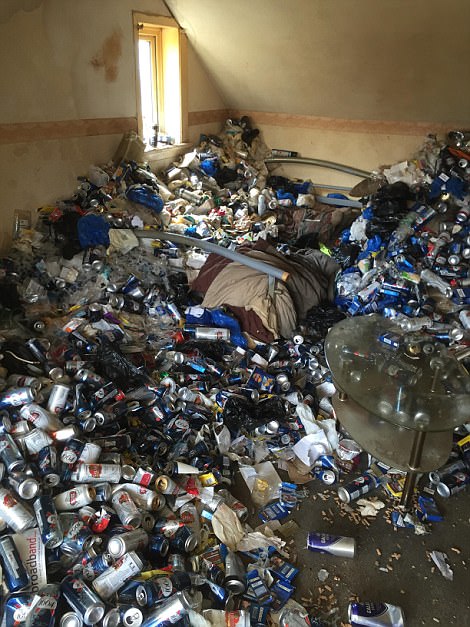 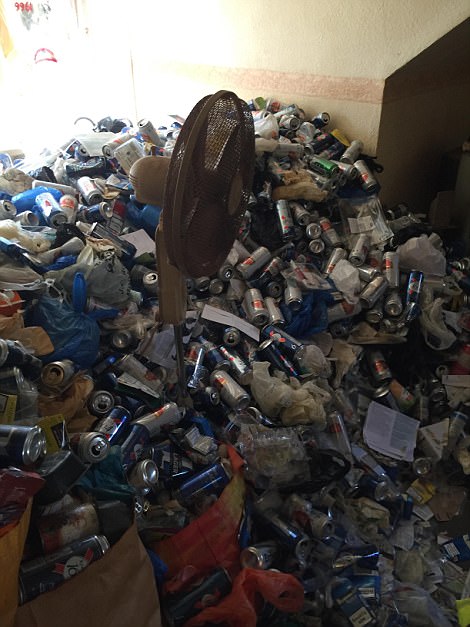 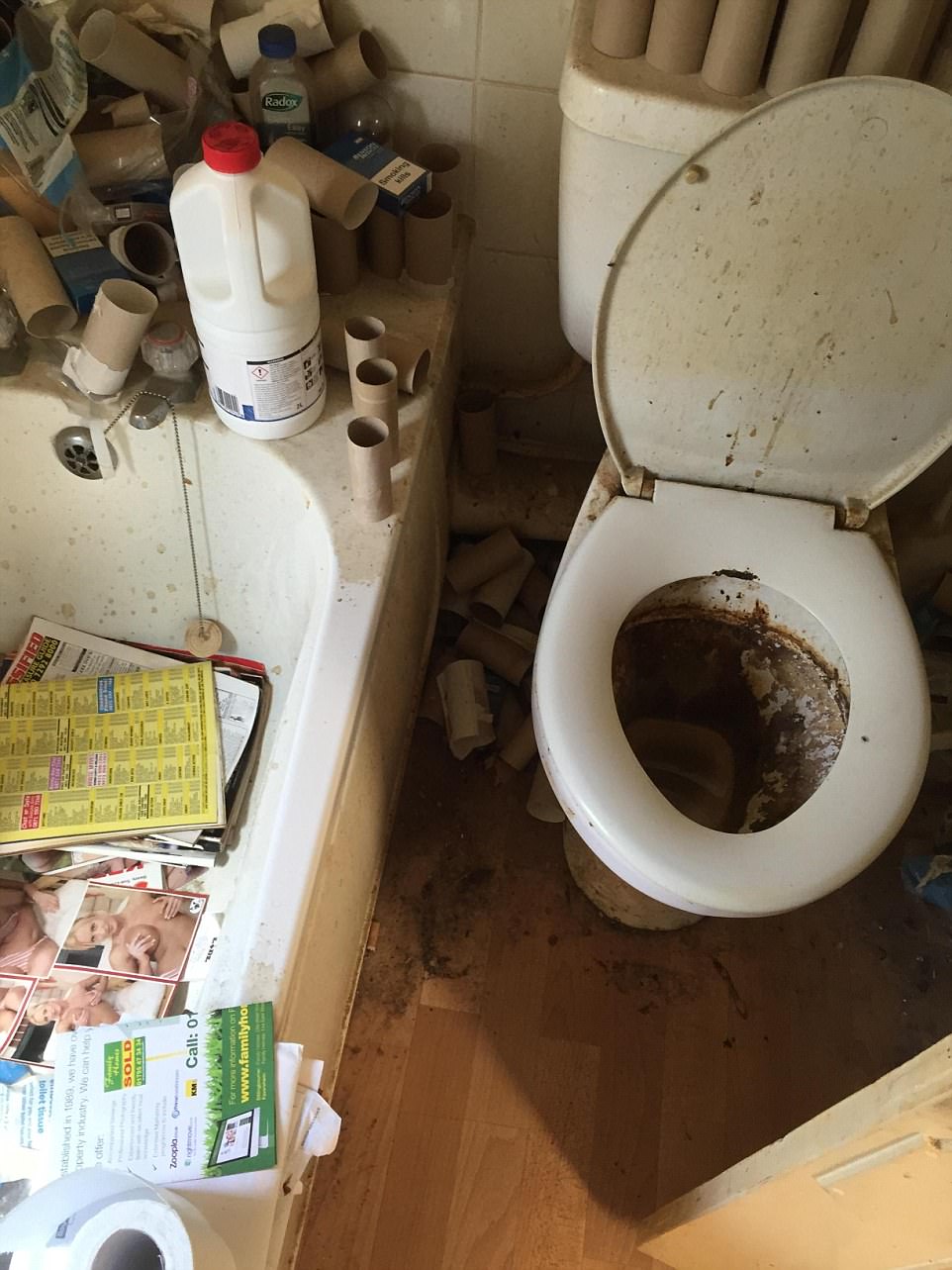 It took four days for Mr Holland and his wife, Nicole Holland, 56, to clear the thousands of beer cans, cigarette packets and food wrappers.

The couple had to pay roughly £10,000 to repair the damage that had been done to the one bedroom flat.

He said: ‘The cleaning took ages because we didn’t do it in one go, but realistically it took over four days just to empty the flat without cleaning it too.’ 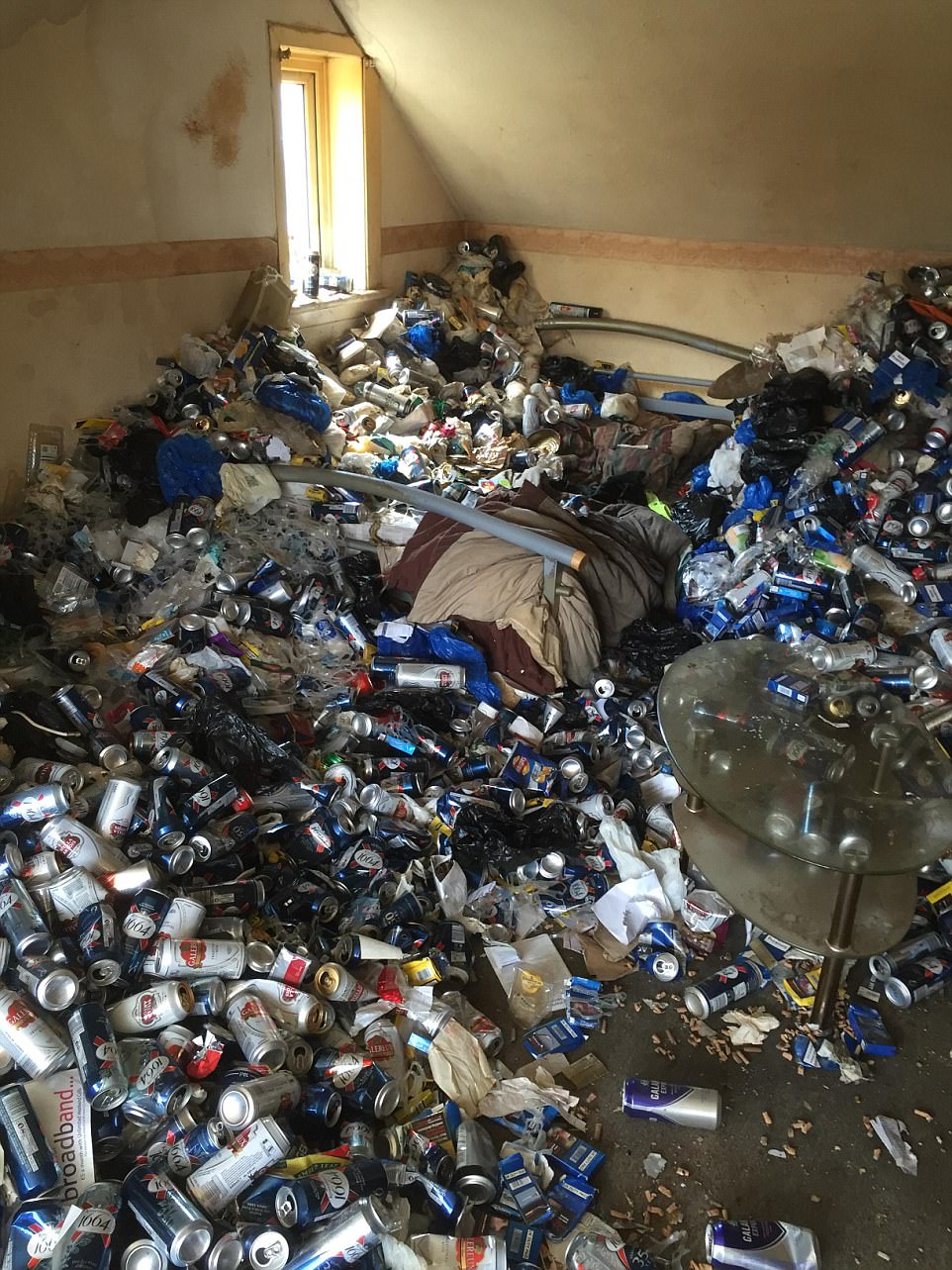 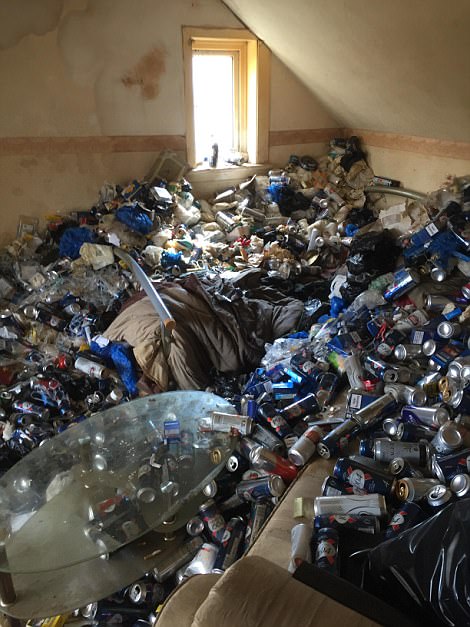 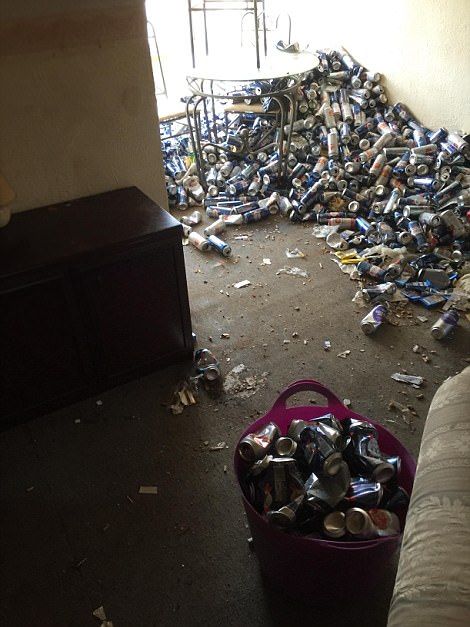 For the past decade, Mr Holland had been unable to enter his own property, and he was horrified by the mess he found

Mr Holland bought the property 30 years ago with his wife and converted it by himself.

‘We wanted the place to look nice for out tenants to move into.

‘The flat was lovely and we rented it to several people at first, who kept the place looking clean and tidy,’ he said.

But for the past decade, Mr Holland had been unable to enter his own property.

His tenant, Michael Grant, 68, a former resident of Park Road, Sittingbourne, refused to let anybody into the flat.

Mr Holland said: ‘He was always so nice and friendly when he first moved into the property.

‘But Michael soon became very hard to get hold of and when the letting agent wanted to view the flat he was not very willing.

‘He was extremely grumpy about it, but we didn’t bother chasing him because he always paid his rent on time.’ 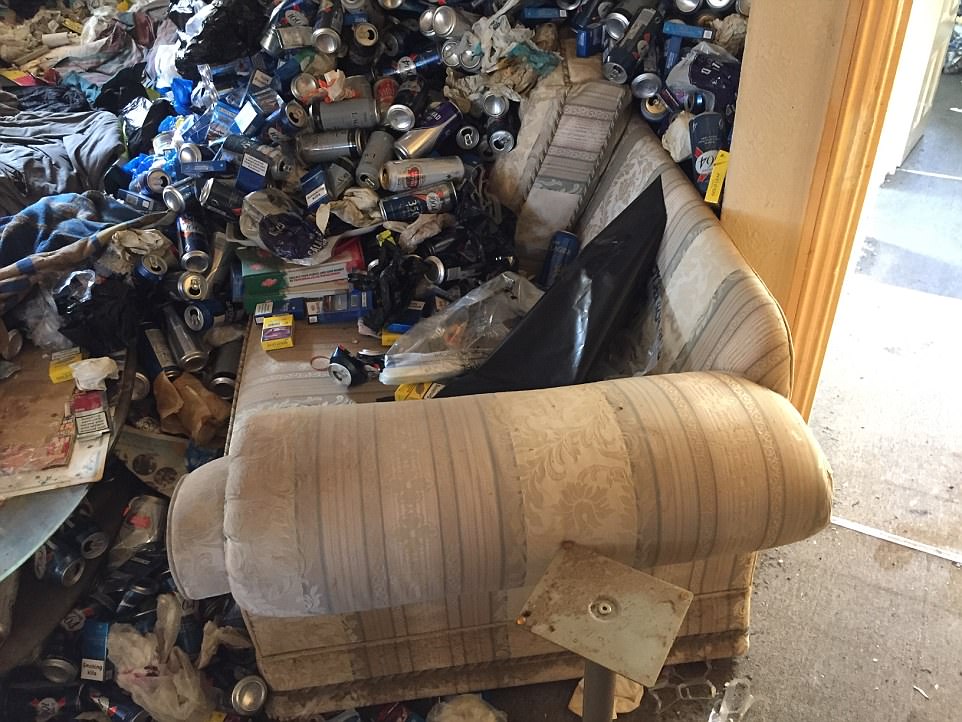 But Mr Grant eventually decided to move out of the flat last year, after Mr Holland increased the rent for the first time in twelve years.

When he finally entered his property the landlord was left to clear up the mess after the long-term tenant, Mr Grant, moved out, leaving his mess behind.

To his disbelief, thousands of beer cans were piled up in every room, mouldy food was left on the floor and rubbish bags towered over Mr Grant’s bed.

The toilet was overflowing with effluent and the bath was used as a makeshift rubbish skip.

Mrs Holland said: ‘His argument for the accumulation of rubbish was that the woman in the ground floor flat had locked the gate – so couldn’t take the rubbish down.

Mr Grant, who has since passed away, was previously not ashamed to admit that he had caused the mess. 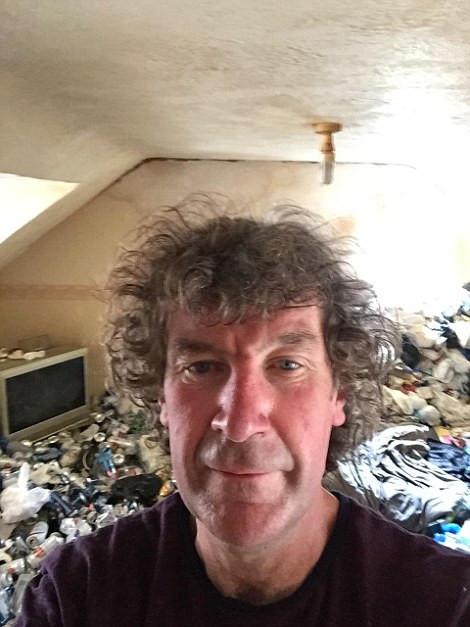 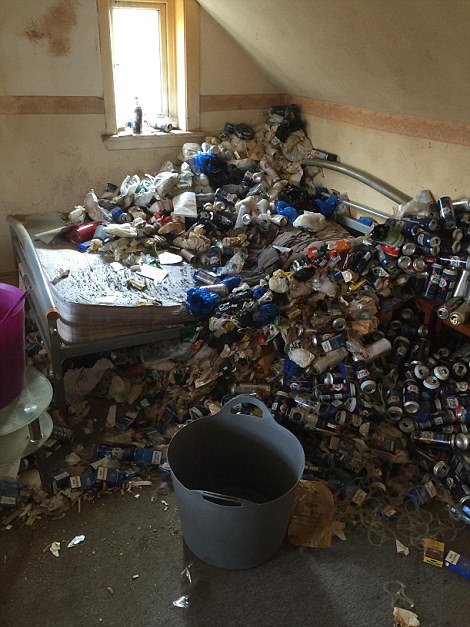 Landlord Graham Holland had to spend four days cleaning the property with his wife Nicole Holland, 56