Mail-order cancer tests are WRONG 40% of the time, analysis claims

At-home genetic test for cancer risk are inaccurate 40 percent of the time, a new analysis claims.

The tests like the recently-approved version by DNA testing firm 23andMe are intended to detect mutations in the BRCA1 and BRCA2 genes that are associated with higher risk of developing breast, ovarian and prostate cancer.

However, an analysis by Ambry Genetics, a company that interprets data from consumer DNA tests, found that nearly half of the results supplied in the last month from various firms were false positives.

As a result at least seven people were given an unnecessary scare, adding yet another reason to question the reliability of such tests that the FDA has warned is ‘seriously limited’.

The report published in the journal Nature last week is based on data from 49 people who had already received such test results.

Their DNA was retested and analyzed by Ambry Genetics and multiple other labs.

The results were then compared with the previous findings, revealing that false positives in 40 percent of the cases.

More than half of those false positives were for BRCA mutations.

An estimated one in 300 to one in 800 Americans have BRCA mutations, commonly known as the Angelina Jolie gene because the actress had a double-mastectomy in 2013 after finding out she had inherited the mutation from her mother.

Specific inherited BRCA mutations have been most closely linked to increased the risk of developing breast and ovarian cancers, but have also been associated with increased risks of other types of cancer.

Current clinical guidelines for evaluating a person’s genetic risk of having a BRCA mutation are based personal and family history of certain cancers.

However, a study by geneticist and breast cancer researcher Mary Claire-King, PhD, found that 50 percent of families with BRCA1 or BRCA2 mutations had ‘no history of breast or ovarian cancer that would have triggered clinical attention’.

This highlights the need for more accessible testing for everyone, not just those who know they could be at risk for the mutation.

One in eight women in the US will develop breast cancer in their life. About five to 10 percent of breast cancer cases are hereditary and can be attributed to a BRCA mutation.

A recent study by the University of Cambridge estimated that about 72 percent of women who inherit a harmful BRCA1 mutation and about 69 percent with a BRCA2 mutation will develop breast cancer by the age of 80.

In men, BRCA mutations are associated with 40 percent of breast cancer cases which affect one in 1,000 men.

They are also associated with prostate cancer, which affects one in seven men.

What are BRCA gene mutations?

Angelina Jolie drew attention to the BRCA gene in 2013 when she had a double-mastectomy after learning she’d inherited a mutation from her mother.

When either of these genes is mutated, or altered, cells are more likely to develop additional genetic alterations that can lead to cancer.

Specific inherited BRCA mutations have been most closely linked to increased the risk of developing breast and ovarian cancers, but have also been associated with increased risks of other types of cancer.

People with certain BRCA mutations tend to develop breast and ovarian cancers at younger ages than those who do not have these mutations.

The mutations can be inherited from either parent, and a child of a parent who carries a mutation in one of these genes has a 50-percent chance of inheriting the mutation. 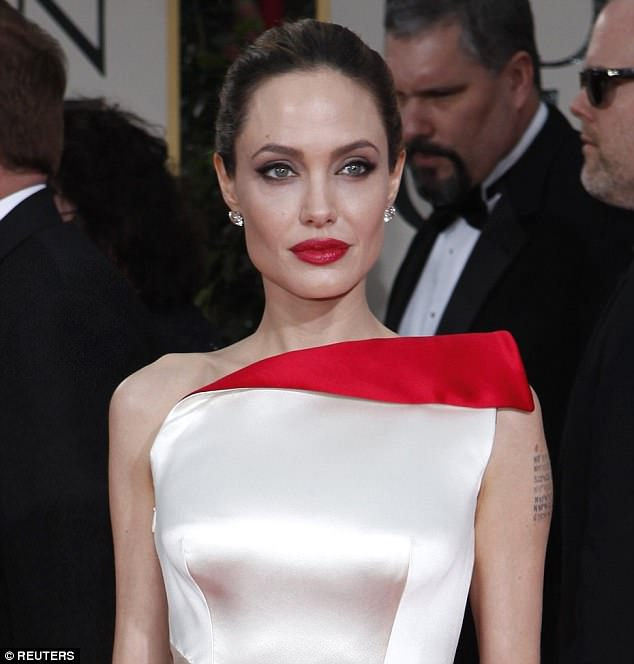 The test is expected to cost $199 and comes with a swab that is inserted in the mouth to collect saliva before being sealed into a container and returned to the company’s lab in California.

It can detect three out of more than 1,000 inherited BRCA gene mutations but cannot determine a person’s overall risk of developing cancer.

Women with one of these variants have a 45- to 85-percent chance of developing breast cancer by age 70, according to 23andMe.

The FDA said that most cancers are not caused by genetic mutations, and the ones tracked by the test aren’t the most common BRCA mutations.

The variants are most prevalent in people of Ashkenazi Jewish descent, but have been observed at much lower rates in other ethnicities.

The Food and Drug Administration has warned that the test is not a substitute for regular doctors visits and should not be used to make any medical decisions.

23andMe CEO and co-founder Anne Wojcicki also said: ‘It’s important to understand that the majority of cancer is not hereditary, our test does not account for all genetic variants that can cause a higher risk of cancer, and people should continue with their recommended cancer screenings.’

23andMe will be required to prominently print warnings about the limitations of the genetic information provided.

‘Being the first and only direct-to-consumer genetics company to receive FDA authorization to test for cancer risk without a prescription is a major milestone for 23andMe and for the consumer,’ Wojcicki said.

‘We believe it’s important for consumers to have direct and affordable access to this potentially life-saving information. We will continue pioneering a path for greater access to health information, and promoting a more consumer-driven, preventative approach to health care.’

The Silicon Valley-based firm was the first FDA-approved company to offer mail-order DNA tests beginning in 2007.

The most popular product they offer is a kit that tests for ancestry information and outline’s a person’s chances of developing diseases such as obesity, diabetes, heart disease or cancer.

The system has been criticized by experts who say the results provided are oversimplified and should be taken with a grain of salt.

The FDA blocked 23andMe from offering genetic health information in 2013, but the company pushed back and in April 2017 was cleared to market 10 genetic tests for diseases such as Parkinsons and Alzheimers.