Brian Davies, 62, blacked up and sang ‘Mammy’ at Loretta Doyley, a court heard

A 62-year-old maintenance man blacked up and performed a black-and-white-minstrel routine aimed at a black colleague, in order to humiliate her during a works Christmas party, a court has heard.

Brian Davies allegedly caused the woman ‘alarm, distress and offence’ during the party at Coopers Carvery in Ely, Cardiff, on December 19.

Cardiff Magistrates’ Court heard catering manager Loretta Doyley was ‘singled out’ when Davies directed the black and white minstrel song ‘Mammy’ at her, leaving her wishing ‘the ground would open up’.

Prosecutor Robert Reid said, of Mr Davies’ depiction of a character from the Black and White Minstrel Show of the 1960s and 1970s, ‘The show was part of mainstream culture and entertainment.

‘But we have moved on and social attitudes have changed.’

Mr Reid said Davies had insisted Miss Doyley attend the Christmas party – for employees of private healthcare firm the Priory Group – telling her he had bought her a ‘present’ after she had initially showed ‘reluctance’ to go.

Mr Reid said: ‘The persistence he displayed on her attending shows that he was intent on focusing this particular prank on her.

‘At the Christmas outing he retired briefly before returning, dressed as a black and white minstrel from a television show, and he sang a number of lines from that show, paying attention to Miss Doyley.’

Footage of the incident was played in court, showing Davies with his face blackened and wearing a boater hat, white shirt and black gloves, and swinging a cane.

He then sang and danced his way around a table of colleagues, directing much of his performance at Miss Doyley, who is initially seen laughing along with her colleagues in the video.

The performance bore resemblance to the 1930s Jewish-American singer Al Jolson who often performed in blackface. 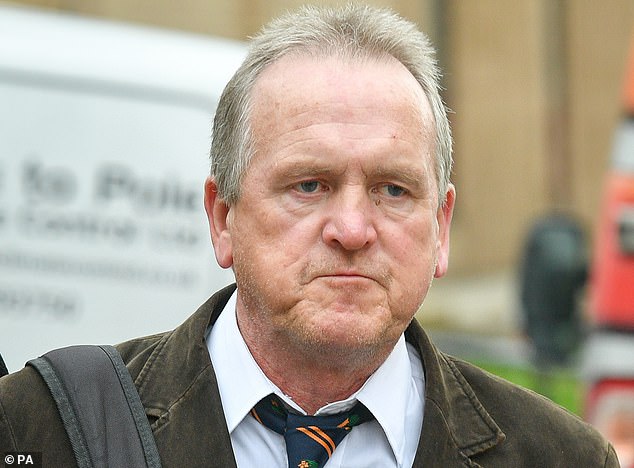 Miss Doyley said of Davies’ actions: ‘Everyone was roaring with laughter and I just wanted the ground to swallow me up’

Mr Reid said the incident left Miss Doyley ‘distressed’, saying she had been off work for ‘some time’ and was receiving medication.

Miss Doyley broke down in tears while telling the court via video link how she felt ‘humiliated’ during the stunt.

She said: ‘Because everyone was laughing I started laughing too. But I was really embarrassed.

‘Everyone was roaring with laughter and I just wanted the ground to swallow me up.’

Miss Doyley said colleagues were taking photographs and video clips of Mr Davies and some even posed for selfies with him.

She said she recognised the song as ‘Mammy’ sung by black and white minstrels, saying she knew it ‘was deemed a racist song’.

She said: ‘Brian told a colleague: ‘Don’t forget your phone, you don’t want to miss this’ before he left. About 15 or 20 minutes later I heard a roar of laughter.

‘The next thing, there was a hand in my left shoulder and it was in a black glove.

‘I turned round and saw Brian had painted his face black and there were bits around his eyes and mouth still white. 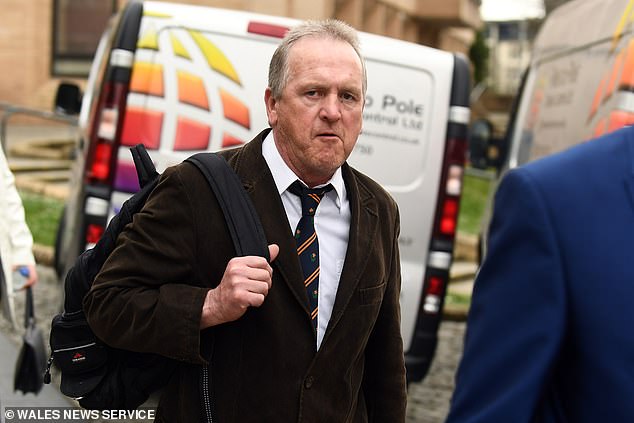 Davies had repeatedly encouraged Miss Davies to attend the party, telling her he had a ‘present’ for her

Miss Doyley told the court that everyone was ‘roaring with laughter’ as he sang and danced in the pub in Ely, Cardiff. She added: ‘I couldn’t believe what he was doing.’

Miss Doyley turned to her fellow colleagues from the Priory Group, telling them: ‘This is not funny’ before leaving the pub in tears.

She was supported by a number of her colleagues with one witness telling her that Davies’ actions were ‘disgusting’ and ‘should never have happened’.

Directing further comments at Davies, Miss Doyley said: ‘You were mocking me and you humiliated me in front of all the people.

‘Everyone was laughing and I just saw them laughing at me because your actions were directed at me.

‘You lied to me to get me there so for me you orchestrated all that.. It was all planned. 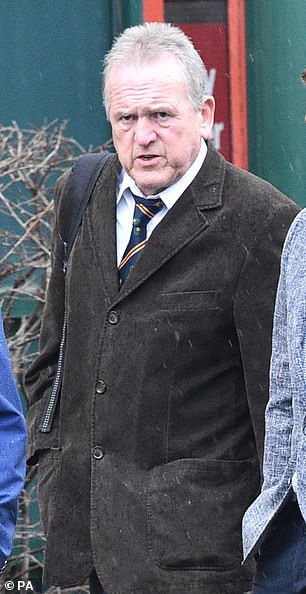 ‘You sang Mammy. You didn’t sing an ordinary song, you didn’t sing a Bob Marley song. You sang a racist song from the Black and White Minstrel Show.’

Despite ‘crying herself to sleep’, Miss Doyley returned to work the next day.

She was supported by some colleagues but was told by another not to ‘get Brian in trouble’.

When Davies returned to work the following Monday, the maintenance worker told Doyley: ‘I thought you were one of the girls but obviously I was wrong.’

The court heard Davies was interviewed by police after Miss Doyley made a complaint, and in interview he stated he had no intention of causing her any distress and denied his behaviour was abusive.

Upon arrest at his home, he told police: ‘Are you serious, I only dressed up’.

At his interview Davies denied that this was racially aggravated and said he was left ‘dumbfounded’ by the allegations.

Giving evidence at his trial today, Davies said he thought he had a ‘fantastic relationship’ with Mrs Doyley.

He said: ‘She was a really dear friend of mine.

‘I only wanted her to be there because she was one of us, I didn’t want her to miss a night out.

Davies says he didn’t realise Mrs Doyley was upset and was ‘devastated’ when he found out she was.

Asked about the Black and White Minstrel Show, Davies insisted that he didn’t realise the show had racist connotations.

He said: ‘I just thought it was a show with songs and dance that that was on Sunday nights that used to be popular.

‘I never knew it was racist. I’ve never heard any criticism.. My mother and father used to enjoy it.

‘Nowadays it might seem strange but when I was a kid it was just a programme.’