Major air routes across the country could be grounded indefinitely as thousands of  airport workers are set to be stood down following Virgin Australia’s collapse.

Australia’s biggest aviation ground operation company Swissport is considering liquidating its assets and cutting staff – a move that could massively delay the restart of the industry after COVID-19.

Executive vice-president Asia-Pacific Glenn Rutherford says the plight of Virgin Australia has had a knock-on effect on his company with the airline owing several million dollars in unpaid bills.

Swissport is now looking at cutting up to 80 per cent of its workers, leaving 2,000 without a job. 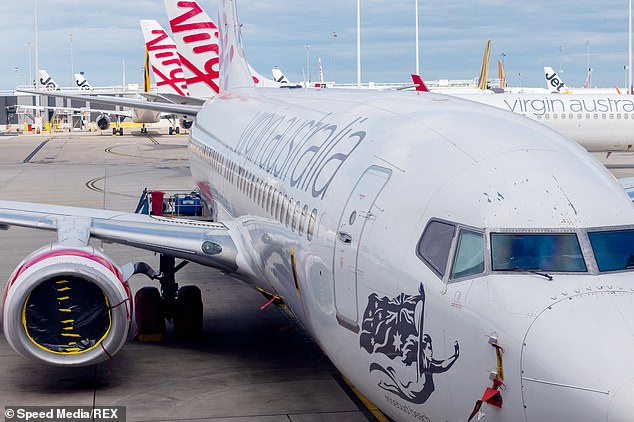 ‘This will have a material impact when (the government) eventually turns the (aviation) industry back on,’ Mr Rutherford told The Australian on Wednesday.

‘As soon as they open the borders and gates, it may take months … and all those skills and equipment will be gone. There will be a crisis in getting it back into operation.’

‘I will seriously look at what they put in front of me …I’m happy to talk to the company …I understand what role they play,’ he told The Australian.

Swissport, which has more than 850 clients worldwide, looks after ground services and cargo handling for domestic and international airlines at airports across the country.

Airlines such as Qantas, Virgin, Jetstar and Tigerair rely on the company for baggage loading, aircraft towing, as well as equipment such as stairs and container loaders. 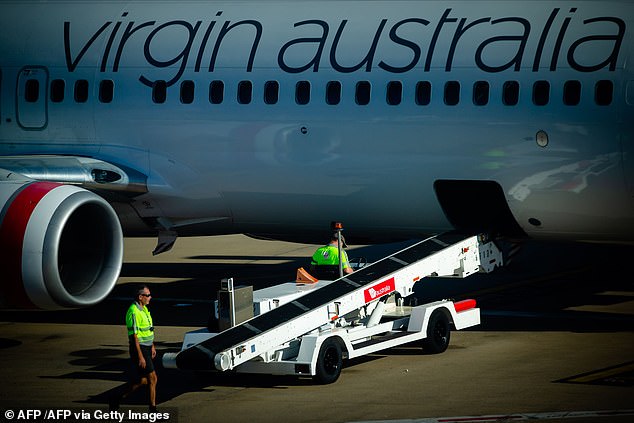 Major airlines such as Qantas, Virgin, Jetstar and Tigerair rely on the company for baggage loading, aircraft towing, as well as equipment such as stairs and container loaders 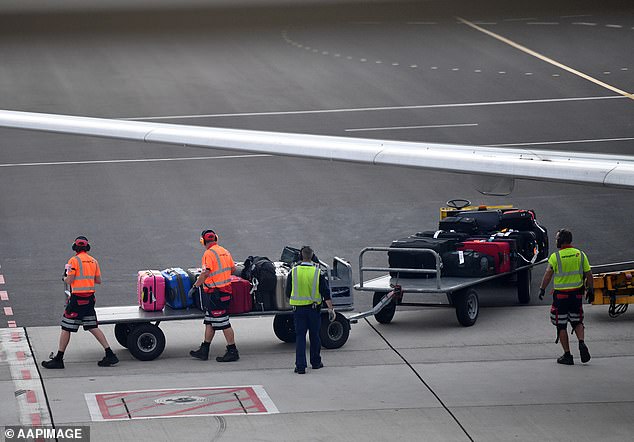 Even if Australian airlines begin to resume operations after the coronavirus crisis is over, they will not be able to operate at a large scale because ground operations would be extremely limited.

‘To start up again at small scale, one or two flights a day, is doable, but to do them in large scale of 20 to 30 a day, with a brand new group of people, is a hard task … it would be an unacceptable risk,’ Mr Rutherford said.

‘We will still exist … but we won’t have the capacity to turn it back on any time quickly.’

Mr Rutherford said it would likely take months or even years for the company to bounce back as it relies on highly skilled workers and specialised equipment.

Virgin Australia could be sold within months

Administrators intend to sell off Virgin Australia within months and don’t plan to carve it up.

The airline went into voluntary administration on Tuesday and a quick sale is now anticipated.

‘There is an extraordinary number of parties keen to be involved,’ administrator Vaughan Strawbridge, from Deloitte, told reporters on Tuesday.

‘This is a matter of months, not longer than that.’

As the hunt for a buyer rolls on, staff who still have jobs will continue to receive their wages, and eligible staff will get the government’s JobKeeper payments.

He said moving the airline’s Brisbane headquarters to Sydney is not under consideration but added that issue would be worked through with potential buyers.

Virgin Australia CEO Paul Scurrah said a sale was the best way of ensuring the airline survived, after it failed to secure the liquidity it needed from shareholders, governments and others.

‘This is a tough day for our airline … (but) we’re certainly not collapsing,’ he said.

‘It is our absolute intention to emerge stronger. Australia needs a second airline and we are determined to make sure we are that airline.’

He said the coronavirus crisis had severed the airline’s oxygen supply, but a new buyer would hopefully ensure Australia has a second carrier when things get back to normal.