A bank has gone to court to hide the fact it paid bonuses to staff, in a move described as ‘astonishing’ by a judge.

The bank is bidding to keep its name out of a lawsuit brought by Credit Suisse to challenge a windfall 50 per cent bankers’ tax levied in the wake of the 2008 crisis that raised £3.4 billion.

Credit Suisse believes that other banks paid significantly less than they did and that six banks escaped the tax.

It wants to see HMRC documents that would show how much each of the banks paid, and which paid nothing or paid less than would be expected. The disclosures may then become public.

Judge Matthew Marsh responded ‘Is that a serious submission?’.

The Credit Suisse lawsuit may end up throwing fresh light on events at the height of the financial crisis and refocus attention on bankers’ pay, by revealing details of how much each bank paid under the levy. 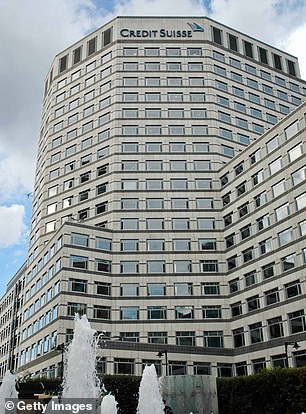 The Credit Suisse lawsuit is bidding to recoup money paid under a levy that raised some £3.4 billion

Judge Marsh gave Al-Rikabi 48 hours to make a formal application to have the bank’s name hidden from court documents.

However, even Credit Suisse does not know the name of the bank, the Swiss bank’s attorney Aidan Robertson, said in court.

Some have already objected to bonus figures being released, George Peretz, HMRC’s lawyer, told the court.

Judge Marsh said his ‘judicial eyebrows were raised’ by the claims that details of taxes paid almost ten years ago could be ‘somehow confidential and revelatory’ – potentially undermining the unnamed bank’s case.

Judge Marsh asked attorney Robertson during the hearing whether his bid for documents was a ‘fishing expedition’. Robertson said it was not and that his clients needed to know how much other banks paid under the tax in order to present its case in a trial scheduled for next year.

Marsh told HMRC to give banks a deadline of Dec. 17 to raise any objections to a redacted form of a spreadsheet held by the tax authority, containing some details of banks’ payments of the tax, being disclosed. They’ll get the opportunity to object in court if they want to, he said.

The tax authority had argued that such details should be disclosed confidentially, or with banks’ names anonymized, because taxpayer confidentiality is “critical to the operation of the tax system.”