A man has been arrested at a public school in Sydney’s south-west.

The arrest at Prestons public school comes shortly after a car burst into flames on Sydney’s M5 motorway, while a man reportedly used a shotgun to steal another car.

‘I had one of the guys in a balaclava come running towards my car, as I noticed the second guy carrying a shot gun,’ he said.

A public appeal was launched only hours before by a family who claim to have had one of their business cars stolen at gunpoint on the same motorway.

‘One of our family’s business cars was held up and stolen at gunpoint on the m5 near m7 on/off ramp at around 9am this morning,’ the appeal read.

‘If anyone happens to spot the car if you can please contact Liverpool or Casula police station.. It would mean a great deal to track it down.’

The witness said he saw a man holding a gun approach the black event medical car as he sped away from the incident.

Moments later, he said he saw the car for a second time.

‘They overtook me at extremely high speed in this car near Moorebank Avenue towing a trailer doing crazy speeds with the lights and sirens on,’ he said.

A spokeswoman from NSW Police confirmed officers attended an incident at Prestons public school on Saturday.

In footage obtained by 7News, a man dressed in all black was led from a school building and handcuffed by five responding officers.

It is not known if the incidents are linked to one another. 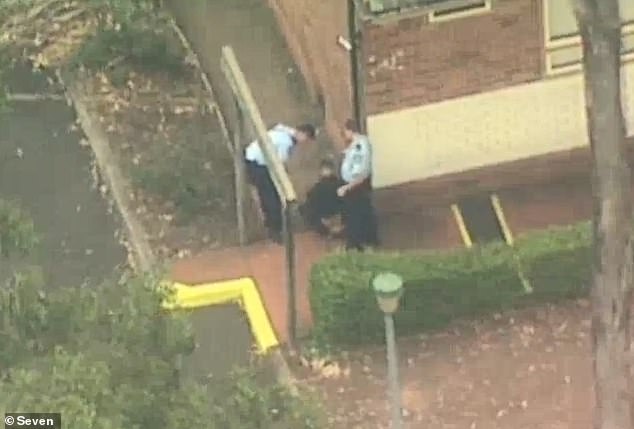