The food and drink content posted by many of the most popular celebrities on Instagram is so unhealthy it would fail UK advertising standards, a study has claimed.

University of Chicago researchers looked at the meals, snacks, and beverages that made an appearance in Instagram posts by the world’s most popular celebrities.

The majority of the content,  from 2019 to 2020, were of the stars living everyday life rather than sponsored adverts.

While the celebrities were unnamed in the study, they would likely include such superstars as pop singer Ariana Grande, Hollywood sensation Dwayne ‘The Rock’ Johnson, and reality TV star Kim Kardashian, who have a combined 650million followers.

Researchers found sweets and alcohol were the most popular food and drink items celebrities posted about and warned they may be normalising unhealthy eating habits to children.

One of the study authors, Professor Bradley Turnwald, wrote: ‘Celebrities are, of course, entitled to post foods and beverages as they wish on their personal social media.

‘However, given celebrities’ broad following, there is potential to shape their followers’ perceptions that healthy eating is normative and valued if celebrities commit to posting a healthier profile of foods and beverages.’

Obesity in children is a massive issue in both the UK and the US with up to a third of youngsters in each country considered overweight.

Paradoxically, social media influencer culture has also been linked to a rise in body consciousness and dysmorphia. 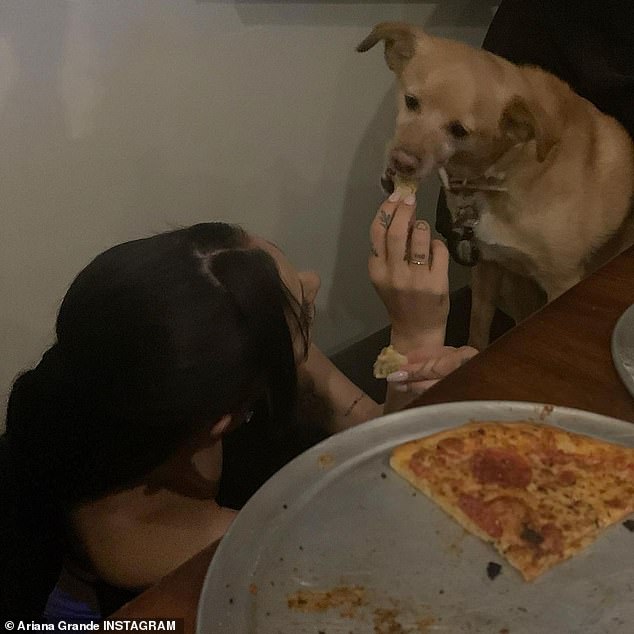 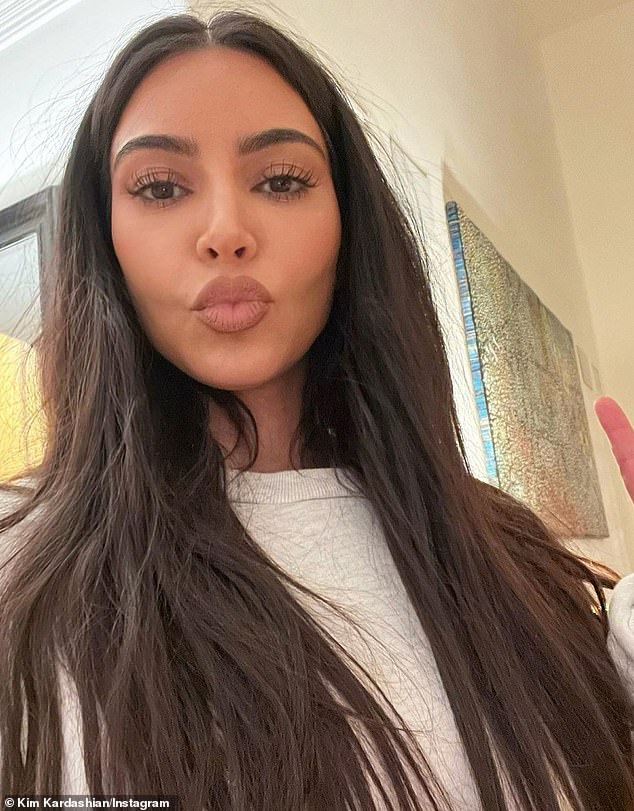 Celebrities like Kim Kardashian have a massive following on Instagram, with the reality television star having just over 2million followers on the social media platfrom 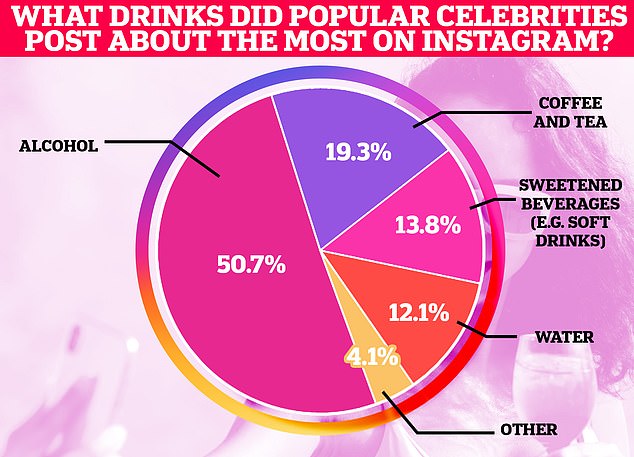 Alcohol was by far the most popular beverage type for celebrities to post about on Instagram in the study found. The authors said the frequency of celebrities posted about alcohol significant considering it could normalise drinking to the stars’ young followers 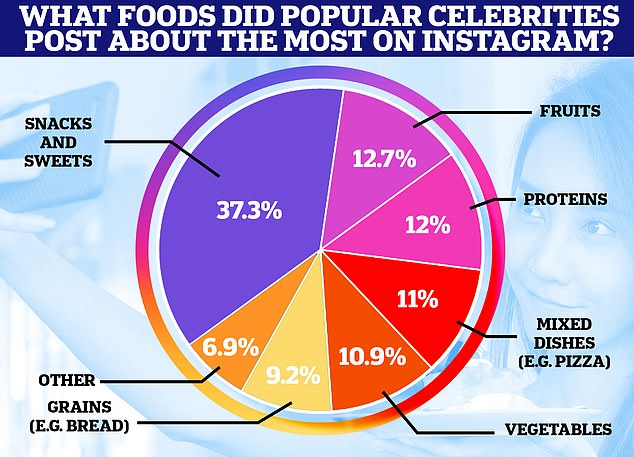 Snacks and sweets, which are high in sugar and saturated fats, formed the majority of celebrity posts about food in the study, nearly triple the amount of the next highest category

Broken down by individual items the most popular food items for celebrities to post about on Instagram in the study were:

Researchers analysed 3,065 food and beverage photos posted to Instagram by the 181 celebrities, who had a combined total of 5.7billion followers. Multiple items appeared in some posts.

Pop singers were more likely to post about sugary drinks, while famous men tended to showcase stronger alcohol such as spirits like tequila.

Each item was then generated a score using the UK’s Nutrient Profile Index (NPI) — a system which ranks products out of 100 based their healthiness.

It takes into account varying levels of sugar, salt, fat, fibre and protein, with higher scores being considered healthier.

The authors highlighted that under UK advertising guidelines, foods with NPI scores less than 64 and beverages with scores less than 70 are considered unhealthy and cannot be advertised on television to young people.

Snacks and sweets were the most commonly posted about food, forming 37.3 per cent of posts — three times higher than any other item. Alcohol accounted for just over half of all posts about drinks.

Broken down by individual items the most popular drink items celebrities posted about on Instagram were:

The researchers, who published their study in the journal JAMA Network Open, blamed the majority of the unhealthy scores on the high levels of sugar and saturated fat content in the items posted.

Posts about unhealthy food and drink also drew more engagement from Instagram users, something that could be encouraging celebrities to post these items.

Dividing celebrities by professions revealed that musicians were more likely to post unhealthy drink options than other groups, but there was no similar trend for food.

The researchers chose the 181 celebrities for the study based on their appearance in Top 100 lists for the most influential sportspeople, musicians/singers, actors and actresses, and social media influencers.

They took the top 25 men and top 25 women from each list to maintain a gender balance for the study.

Professor Turnwald, an expert in behavioural science, said the influence of celebrities in promoting food and drink habits to young people should not be underestimated.

‘Creating the perception that users are broadcasting their real life, social media platforms boost perceived authenticity and credibility of posted content,’ he said.

‘On social media, celebrities are perceived as fellow users but also as more credible than ordinary users and more trustworthy than television advertisements.

‘Celebrity posts can influence viewers through attitude alignment, social connection and positive meaning transfer from likeable people to the foods and beverages that they depict.’

He added that celebrities posting a lot about alcohol was significant as it could normalise drinking to the stars’ young followers by creating a ‘positive association’.

One limitation of the study the authors acknowledged is that they did not compare celebrities posting of unhealthy food and drink to that of normal Instagram users.

They noted this meant they couldn’t say whether the content posted by celebrities was any unhealthier than that posted by members of the general public.

Another limitation cited was the authors did not explore the Instagram video content of food and drink options.