Impeachment action against Donald Trump has gained support from more than half of the House of Representatives.

One independent and a further 219 House Democrats have voted unanimously to pursue action against the President over the alleged Ukraine scandal.

A whistleblower initially claimed that Trump put pressure on the nation to investigate Joe Biden and his son Hunter while withholding military aid in July.

The transcript of that phone was released on Wednesday where the President names Biden and predicts Ukraine’s economy will do ‘better and better.’

In an announcement she condemned the President for allegedly betraying his ‘Oath of Office… national security, and… the integrity of our national elections.’ 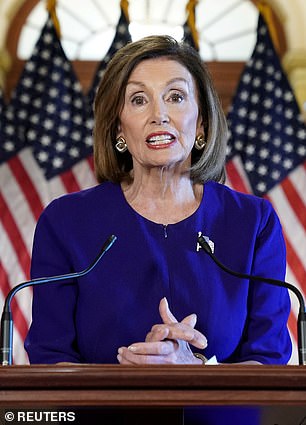 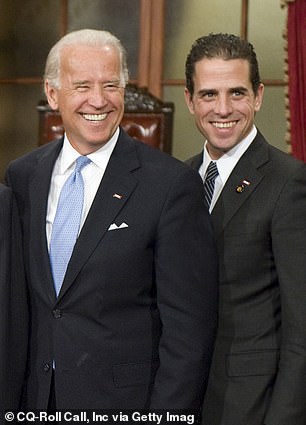 House Speaker Nancy Pelosi (left) said she would launch an official impeachment inquiry into Trump’s actions. In a phone call transcript Trump appeared to ask Zelenskiy to investigate Joe Biden’s (right, left) son Hunter (right, right), who was on the board of a Ukrainian gas company

While all House Democrats support a form of impeachment action, it is not clear whether they will all vote to impeach the president, NBC News reported.

Some have asked for an inquiry to examine any evidence of wrongdoing but others have favored a House Judiciary Committee investigation.

Prior to recent developments Pelosi had attempted to calm calls for impeachment and less than half of the Democrats 235 members supported it.

The numbers spiked after Robert Mueller’s testimony in July to the House Judiciary and Intelligence committees about Trump and Russia. The new allegations have led to another increase in support.

Trump told his chief of staff to place a hold on around $400 million in military aid to the country to help it in the conflict against Russia, it was claimed.

In a description of the call Trump suggested Ukraine President Volodymyr Zelenskiy should look into why his nation’s top prosecutor had allegedly investigated the business dealings of Biden’s son Hunter.

Hunter had previously served on the board of a Ukrainian gas company.