Makeup-free Nicole Richie relaxes on a boat with her lookalike daughter Harlow, 10, in Sydney

She’s the Hollywood socialite, who’s enjoying a family trip Down Under.

And Nicole Richie, 36, enjoyed a luxury boat ride around Sydney Harbour on Saturday with her lookalike daughter Harlow, 10.

The jewellery designer went makeup-free and showed off her trim figure in denim cut-offs paired with a black bodysuit and designer shades.

Little Harlow, who bears a striking resemblance to her famous mum, was seen strapped up in a life jacket as she enjoyed water activities on the sunny day.

The Los Angeles-based star appeared to be in high spirits on the enormous chartered vessel.

While her husband Joel Madden , 39, and their eight-year-old son Sparrow were not pictured, she was also joined by several friends on the outing. 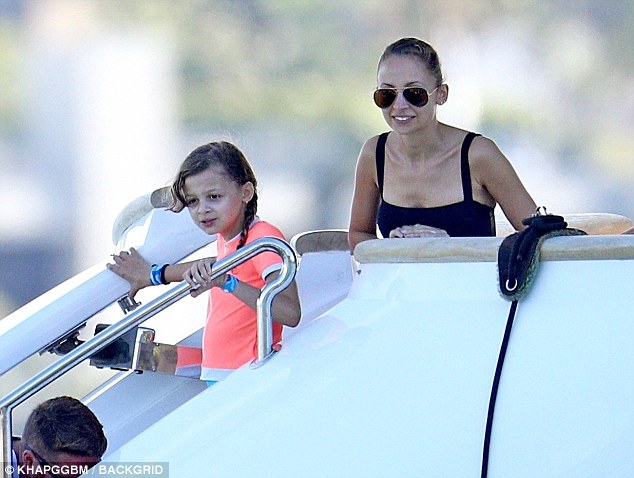 Family day out! Nicole was pictured with her daughter, Harlow, 10, as the they enjoyed a number of water activities on the picturesque harbour 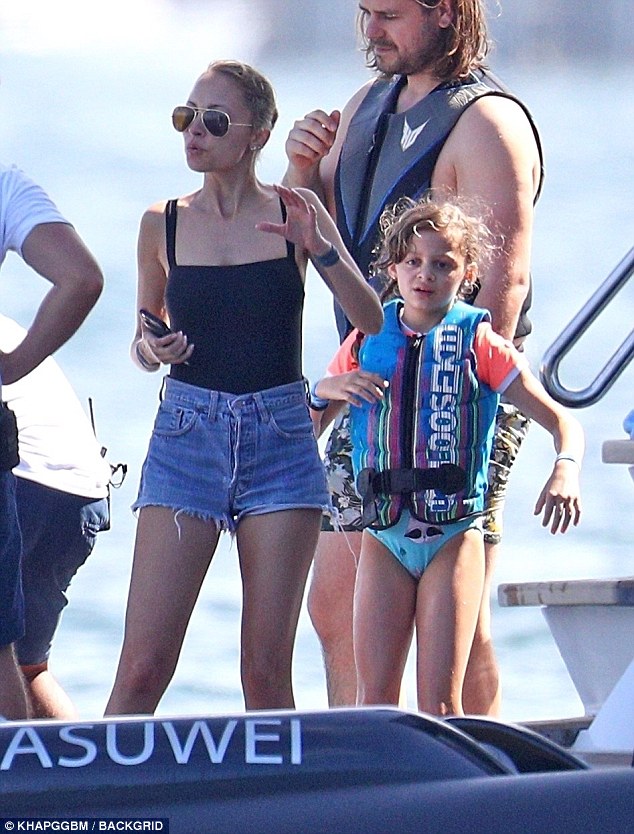 Need a drink? Nicole, who normally opts for high fashion glamour, was busy running around the boat while they had fun on the luxury vessel. Pictured here with Harlow, 10

The guests, and Nicole, zipping around the picturesque harbour during the day.

Enjoying the last of Sydney’s good weather, the young family flew into Sydney on  Wednesday.

The visit in order for Joel to perform with his band Good Charlotte in capitals Melbourne, Sydney and Brisbane. 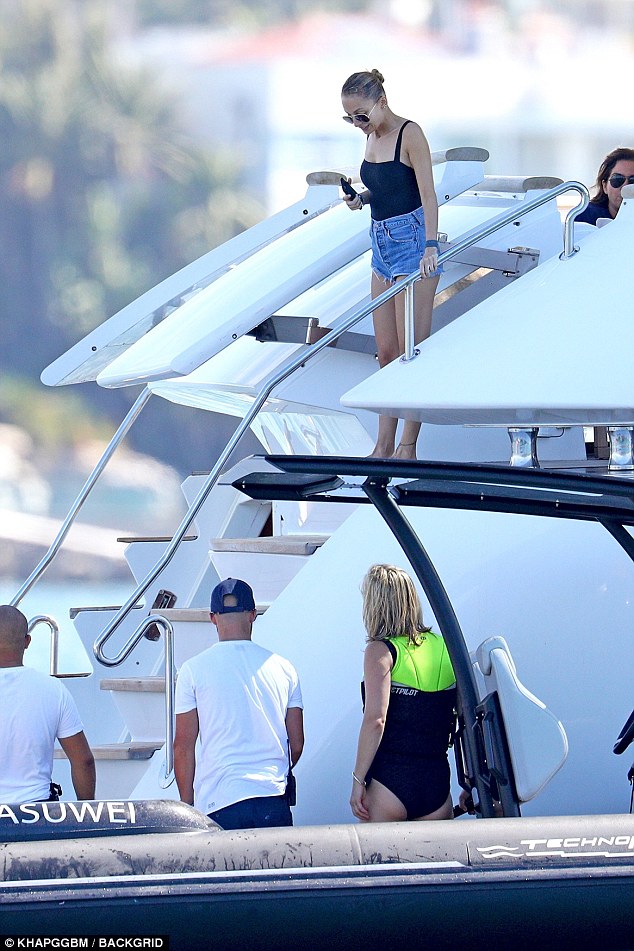 Bit of downtime! The fashion icon appeared relaxed and happy as she chatted with her guests, who also appeared to be having a good time 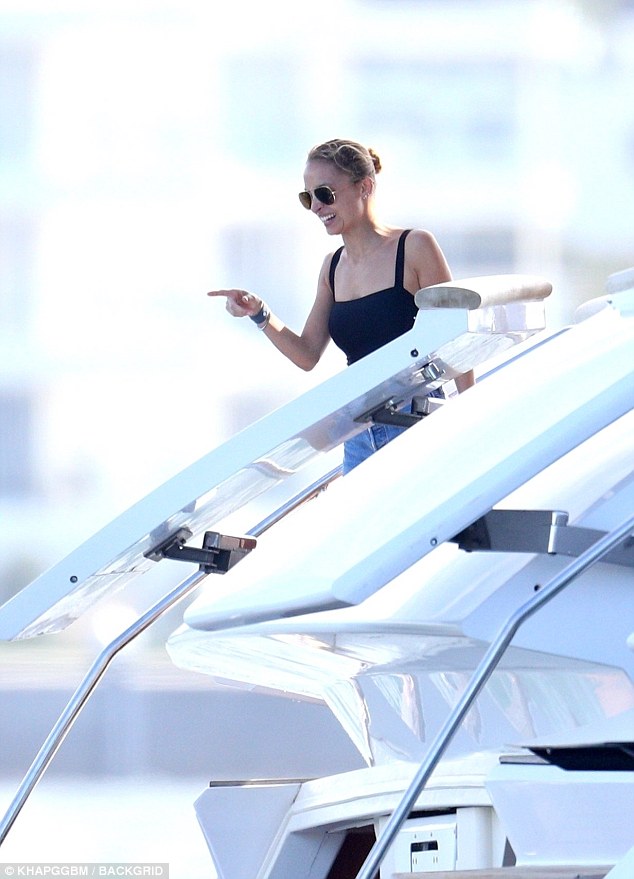 Everyone having fun? Nicole appeared to be beaming as the luxury yacht cruised the harbour

It came after The Daily Mail reported Nicole had a scare while shopping out in Los Angeles earlier this month.

An attempted robbery occurred at a jewellery store in the upscale Glendale Galleria forcing a security guard to fire his gun. 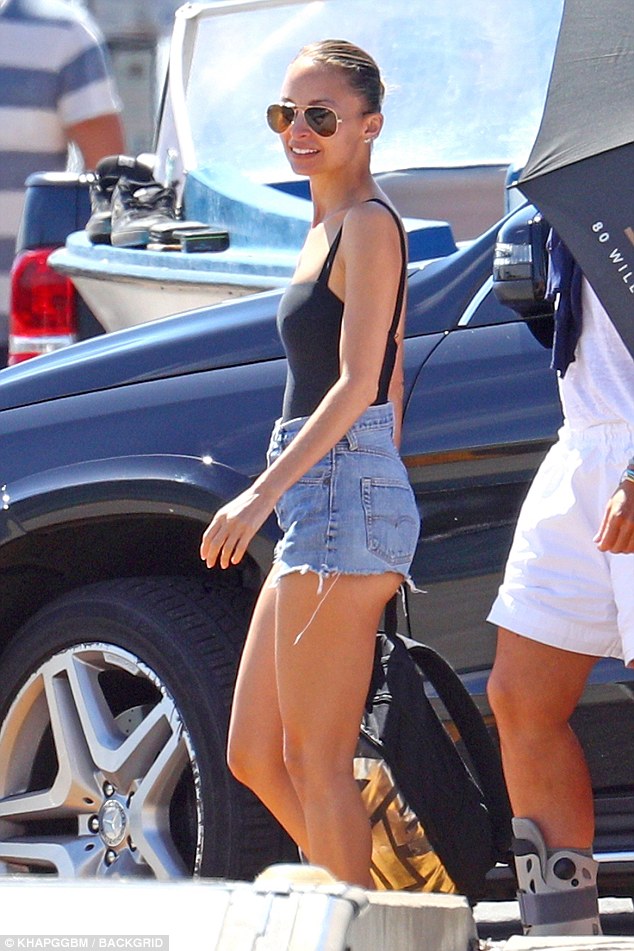 Cool change? The fashion designer showed off her slender, bronzed pins on the family day out in a pair of racy denim cut offs

Users took to social media to warn shoppers of the shooting in the area, just minutes after Nicole Richie was spotted enjoying some retail therapy with her children at the outdoor complex.

In February, Nicole, who became famous for her love of muted colours, recently opened-up to People Style magazine about her love of colour.

‘I am somebody who likes a lot of color around me, it elevates me,’ Nicole, who serves as an Urban Decay brand ambassador, said. 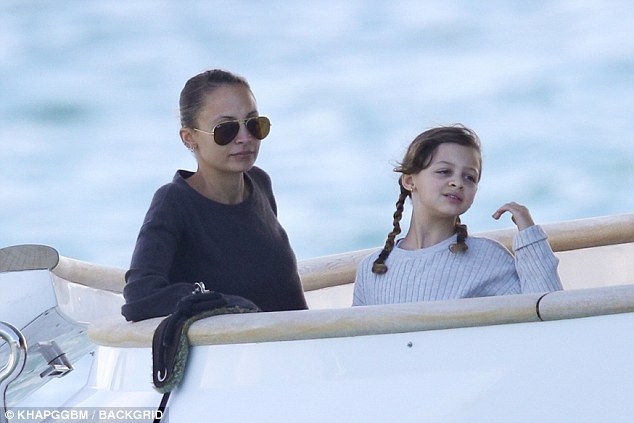 Nice view? Later in the evening,  the socialite and her young daughter, Harlow, 10, stood on the deck while admiring the view of Sydney city 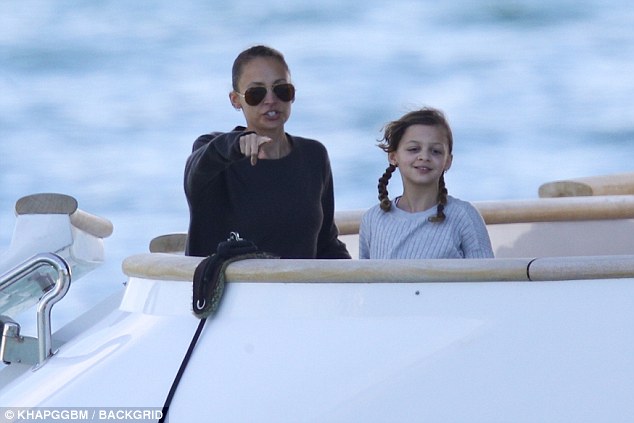 Hey, look at that! Mum Nicole appeared to be pointing out a number of landmarks to her young daughter, Harlow, 10 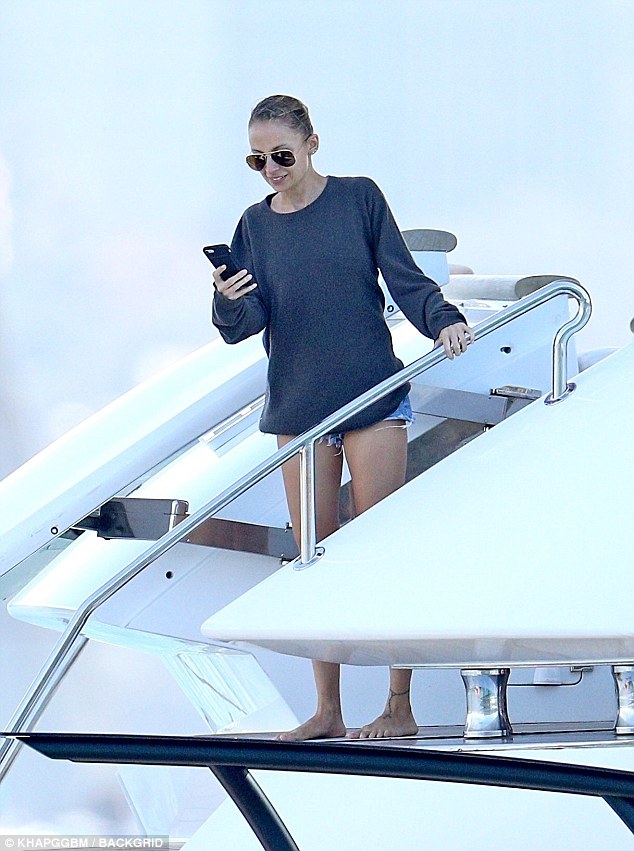 Getting colder! Later in the day, Nicole opted for a dark coloured pullover when the sun was setting

‘I’m very passionate about color and I know that it has a direct effect on the energy that I have around me.’

It comes after it was reported Nicole doesn’t give her blessings to her sister, Sofia’s high-profile romance with Kardashian-ex Scott Disick.

Talking to HollywoodLife.com, a source close to Nicole said she has ‘pleaded,’ with her younger sister to end the romance.

‘Nicole worries that Scott and his bad-boy ways, are a bad influence on her much younger little sister,’ the source was quoted as saying.

‘Nicole thinks Scott is way too old for Sofia and Nicole freaked out when she learned that Sofia has been hanging out with Scott’s kids too.’ 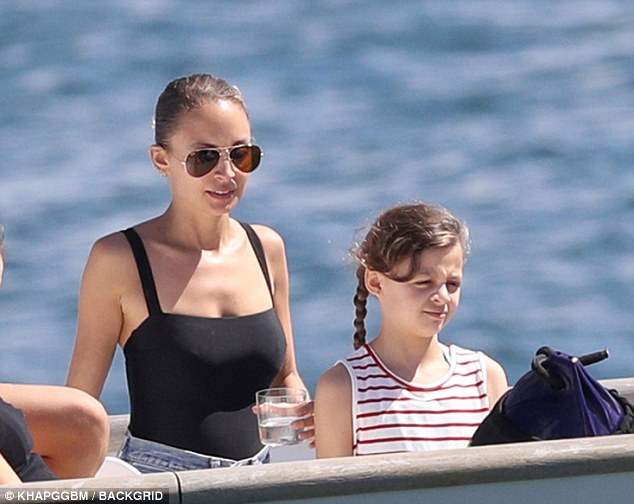 All aboard! A number of kids joined the famous family on the luxe yacht, enjoying the last of Sydney’s hot days 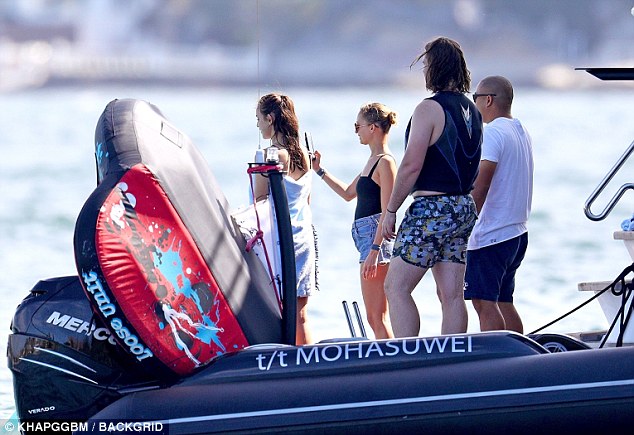 Water activities! Nicole and her guests enjoyed the warm day and picturesque views while on Sydney harbour