Burnt toast could expose households to more toxic air pollution than if they were standing near a busy road, a study has revealed.

Scientists said toasters, alongside scented candles, wood-burning stoves, and gas cookers, could create pollution as people cook and clean inside their homes.

A study by the University of Texas at Austin found that toasters release toxic particles into the air from the moment they are turned on, the Sunday Times reported.

The safest way to make the breakfast food is to ‘go for gold’ and only allow the bread to become a light brown colour, experts said.

Speaking at a meeting of the American Association for the Advancement of Science, Marina Vance said: ‘When you make toast, the heating element starts warming up the debris and gunk in the toaster which includes oils.

‘Add to that the bread itself – it’s going to emit a range of things. We found ethanol, a by-product of yeast. If there’s tiny pieces of bread touching the heating element you can see from the smoke, maybe from the crumbs at the bottom of the toaster – they will all make a lot of particles.

‘It’s led to what would be considered “very unhealthy” air pollution levels compared to the outdoor air quality standards.’

The research team used advanced sensors and cameras to monitor the indoor air quality of a 1,200-square-foot manufactured home on the University of Texas at Austin campus.

Over the course of a month, the researchers conducted a variety of daily household activities, including cooking a full Thanksgiving dinner in the middle of the summer.

The experiment’s results are still pending, but Ms Vance said it is apparent homes need to be well ventilated while cooking and cleaning.

Even basic tasks like boiling water over a stove top flame could contribute to high levels of gaseous air pollutants and suspended particulates, damaging health.

The World Health Organisation (WHO) recommends no more than 25 micrograms of fine particulates per cubic metre should be found in the air.

This is far less than the 3,000 to 4,000 particulate levels which were found in the atmosphere when toast was allowed to turn dark brown.

Volatile organic compounds (VOCs) from products such as shampoo, perfume, hairsprays and cleaning solutions are said to eventually make their way outside. 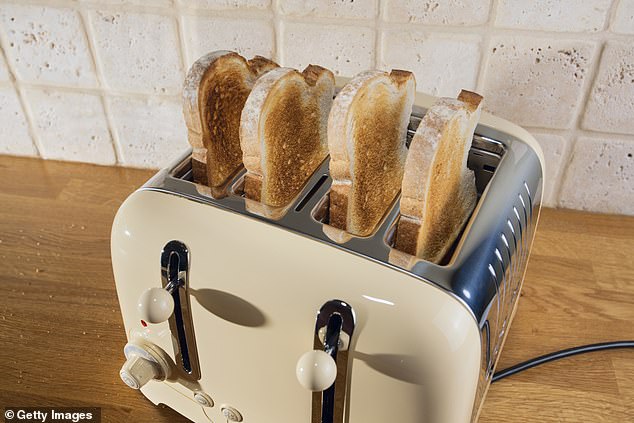 These have been blamed for triggering asthma in children and worsening it in adults – and raising the risk of heart disease.

VOCs also contribute to fine particle formation on a massive scale – making up an even greater source of global atmospheric air pollution than cars and lorries.

Ms Vance, a mechanical engineer at the University of Colorado Boulder, said: ‘Homes have never been considered an important source of outdoor air pollution and the moment is right to start exploring that.

‘We wanted to know: How do basic activities like cooking and cleaning change the chemistry of a house?’

Breathing in VOCs can inflame the eyes, nose and throat, cause difficulty breathing and nausea and damage the central nervous system.

Carpets, vinyl flooring, paint, heating and cooking fuel also cloud households with them. The problem is worst in homes built in the past 20 years thanks to ‘green’ rules that require energy-efficient impermeable glazing and insulation.

This means such homes do not breathe – and nor do older ones boosted to meet new standards.