A ballsy swimmer was seen floating within inches of a huge basking shark, seeming unfazed as it glided past him in the water.

The swimmer was out for a dip of the coast of Malaga on Friday when the animal came towards him in the water with its tell-tale fin showing.

A spectacular video of the moment shows the swimmer dipping his head under water to take a closer look at the basking shark. 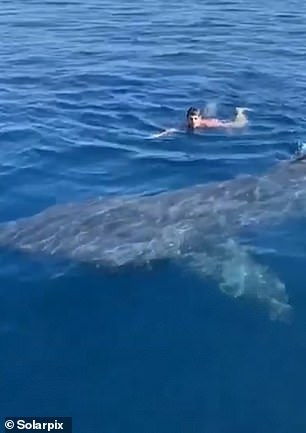 But the shark does not seem bothered by the man and glides around him, as the swimmer moves to keep up with the plankton-eating animal.

The man looks back in amazement at the person filming as the shark stays close to the surface of the water, keeping its fin showing.

Experts have estimated the the shark was around 20ft.

The footage of it swimming in Malaga bay was taken from a boat the swimmer is thought to have jumped from so he could get up close to the animal.

This sighting is the third in less than of a month of a plankton-eating basking shark in Spain’s southern waters.

Its presence in the area has been linked to a large amount of plankton. 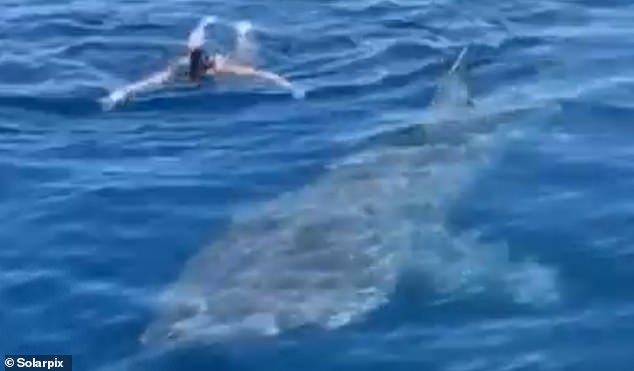 There was also a sighting of a blue shark on Sunday, when a member of Spain’s Paralympic swimming team was filmed out-sprinting two sharks after a terrifying encounter off Sant Pol beach on the Costa Brava north of Barcelona.

Ariel Schrenck went up a gear after hearing his mum shouting from the shoreline when she spotted two tell-tale fins and saw the animals heading in his direction.

Ariel, part of the Spanish team that took part in last year’s World Para Swimming Allianz Championships in London, was training at the time.

The sharks the 19-year-old out-swam are thought to be tintoreras or blue sharks, which have been blamed in the past for attacks on holidaymakers, including one in Elche near Alicante in July 2016.

The 40-year-old victim in the 2016 incident was rushed to hospital and given stitches to a wound in his hand. 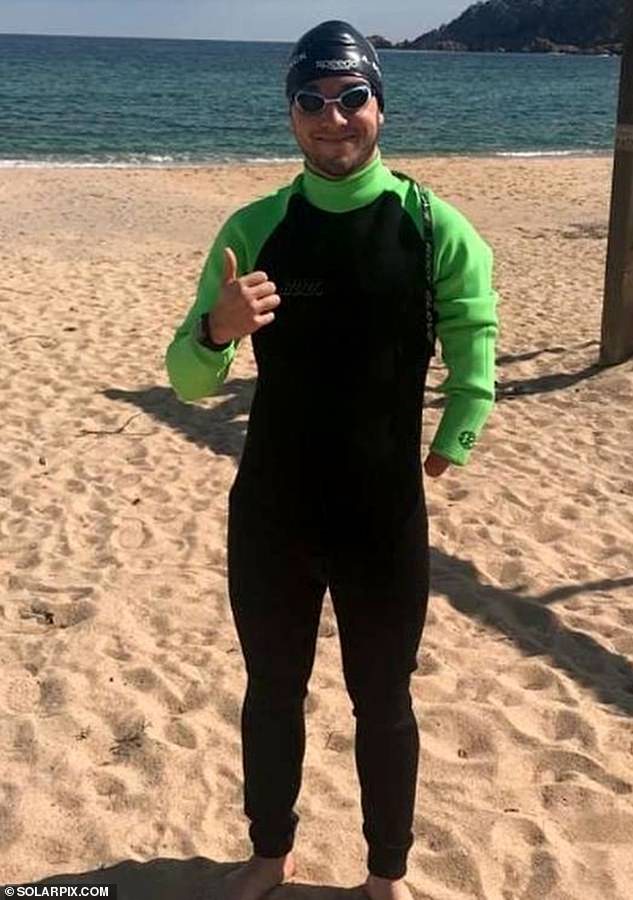 The plankton-eating animals are described as non-aggressive harmless to humans, but police warned kayakers and other sports enthusiasts not to approach the basking shark.

Civil Guard officers released footage of the giant 26ft shark creature near their boat after warning kayakers and other water sports enthusiasts to stay away from it.

Social media users speculated the creature was a basking shark, the second-largest living shark after the whale shark.

Police later confirmed it was a basking shark and said it was more than 26 feet long – around the maximum size it can reach. 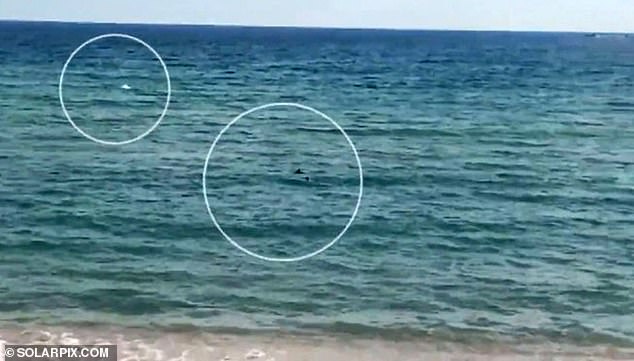 The drama happened off Sant Pol beach on the Costa Brava, a short drive from the famous resort of Lloret de Mar. Pictured, Mr Schrenck is followed by two fins

A Civil Guard spokesman said on Sundaym the shark was spotted less than a quarter of a mile off the beach at La Mamola, a traditional fishing village of just under 2,000 inhabitants which belongs to the municipality of Polopos and is in the easternmost part of the Costa Tropical.

It has grown in recent years as a tourist and holiday attraction.

The police force said in a statement: ‘Officers from the Civil Guard’s Maritime Service have recommended sports enthusiasts should not approach the shark with their kayaks.

‘The shark was spotted just 400 metres off La Mamola beach on Saturday morning.

‘It was a basking shark which was more than 26 feet in length. 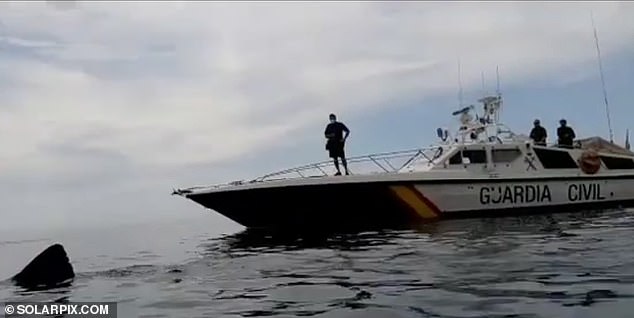 A basking shark nearly 30ft long, the largest size the creatures normally reach, was spotted off the coast of La Mamola in southern Spain

‘The basking shark has not been known to attack humans but when it was spotted the warning was made to people in the vicinity not to approach.

‘It’s the second shark sighting in the last few weeks. On May 3 a smaller one was seen off the beach at Calahonda.’

A smaller basking shark was filmed on May 3, described as around 13ft long, swimming close to the Calahonda, only a 20-minute drive east of La Mamola.

The shark sighted just under a fortnight ago was described by witnesses at the time as being around 13feet, although police said on Sunday it was some 10 feet long.

At the time there were no tourists in the water because of Spain’s coronavirus crisis and the mass exodus in March of those holidaymakers that were in the country. 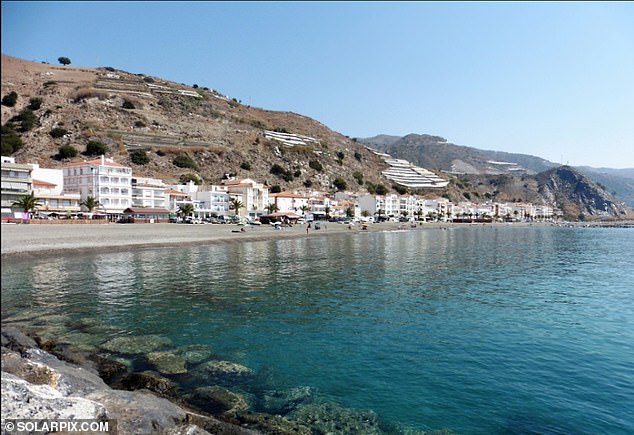 La Mamola is a fishing village which has grown in recent years as a tourist attraction. It holds just under 2,000 inhabitants and belongs to the municipality of Polopos

It was inside the yellow buoys put out to mark the area pleasure boats have to stay outside so it is safe for swimmers.

In August 2018 tourists fled in panic after a shark appeared off a packed Majorcan beach.

Bathers including groups of young children by pedalos watched on as the fish swam around just a few feet away in the water.

The 10-foot shark, also thought to be a tintorera, made its unexpected appearance at Cala Domingos, a sandy beach that gets very crowded in August in Calas de Majorca on the island’s east coast.