Malaysian boy, 15, has the DEAD FOETUS of his twin removed

A dead foetus which had its own hair and penis has been removed from the stomach of a 15-year-old boy.

The patient, who remains anonymous, had been plagued with unbearable stomach pain and bloating since he was born – but doctors were baffled.

It was only when the Malaysian teenager sought urgent help at a local hospital that the bizarre source of his discomfort was stumbled upon.

The boy’s unborn twin, which confused doctors for a tumour, was leaching on his blood supply and feeding off him.

The malformed foetus was complete with long hair, developed male genitalia and skin covering its body when it was removed.

A 15-year-old boy from Malaysia has had the dead foetus of his twin removed from his stomach. It had its own hair, penis and pubes

Surgeons at Sultan Abdul Halim Hospital in Sungai Petani found the foetus, which weighed 3.5lbs (1.6kg) and had deformed limbs.

The non-viable baby, meaning it wasn’t capable of living independently, had no mouth, umbilical cord or placenta, they wrote in BMJ Case Reports.

They initially requested CT scans for the boy when they felt a tender, hard mass over the central part of his abdomen – a tell-tale sign of a tumour.

Scans then revealed a ‘huge intra-abdominal mass’ that was 23.8cm long, which showed the development of a spine. This halted their suspicions of cancer.

They wrote: ‘Components in favour of a fetus that were seen within the mass include deformed skull, vertebral body and long bones.’

Returned home for a funeral

After the risky operation, the unborn baby was returned to the family for a private funeral as per the mother’s request. 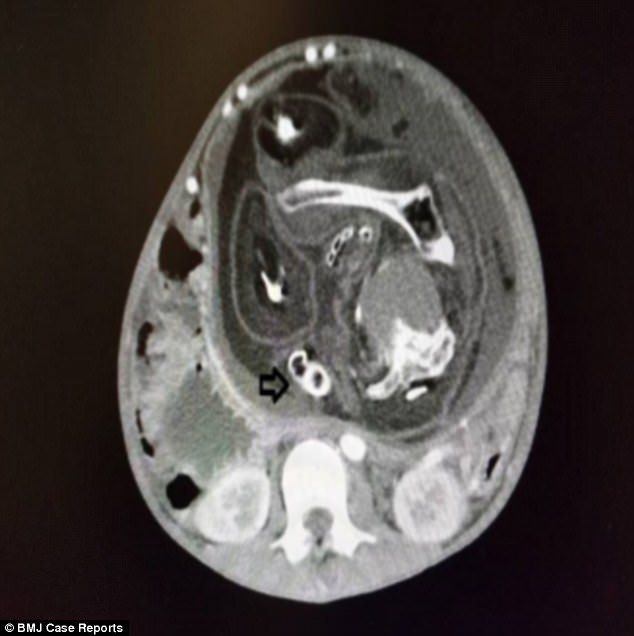 WHAT IS FOETUS IN FETU?

Foetus in fetu is a rare condition that affects only one in five million live births.

It is a condition where the malformed foetus is found in the body of its twin.

The foetus is found in the abdomen in 80 per cent of cases, although there have been reports of it occurring in the skull.

There are only around 200 reports of it ever happening.

While the diagnosis is gaining popularity, the World Health Organisation has classified ‘foetus in fetu’ as a variant of mature teratoma, a type of cancer where the tumour is well-developed.

Known as ‘foetus in fetu’, medical literature states that only 200 cases of the rare condition have ever been reported worldwide.

It is caused by the incomplete separation of twins, which fails to grow and instead becomes an internal part of the healthy twin.

The foetus is found in the abdomen in 80 per cent of cases, although there have been reports of it occurring in the skull.

Usually, the unborn twin doesn’t survive long after birth, but it can be life-threatening for the baby that does survive.

Writing in the journal, the team of doctors, led by Dr Rashide Yaacob, said that the complete removal of the dead twin is crucial.

He wrote: ‘There is a possibility of malignant recurrence if any of the tissue is not completely excised.

‘The operation to remove foetus in fetu is a challenging operation as the mass is highly vascular with multiple feeding vessels.

‘The big size of the foetus has made surgery more difficult as there is high possibility of injuring surrounding structures.’

The patient has since recovered.