Malaysia’s Mahathir: A portrait of the premier as an…

The 93-year-old once and current prime minister of Malaysia wobbled a bit as he clasped the railing, cautiously mounted the four stairs leading to the stage in the bowels of the Asia Society and shuffled over to the podium.

Then Mahathir, called a strongman by his critics so often that he has a joke ready about it, faced the packed auditorium. He smiled broadly and began talking. And the years, maybe even a decade or two, seemed to melt away.

When Mahathir was done, the moderator, former Australian Prime Minister Kevin Rudd, seemed stunned. He called it a “bravura performance” from the “patron saint of political comebacks,” a man who had been premier for 22 years until he retired in 2003 and had now been yanked – willingly – back into the spotlight.

But the prime minister had only just begun.

FILE – In this Aug. 20, 2018 file photo, Malaysian Prime Minister Mahathir Mohamad speaks to reporters during a news conference at the Great Hall of the People in Beijing. After nearly a generation out of power, the 93-year-old is clearly relishing his return to power. (How Hwee Young/Pool Photo via AP, File)

Mahathir, attending the U.N. General Assembly this week as Malaysia’s leader for the first time in nearly a generation, cracked jokes that drew genuine belly laughs from the capacity audience. He rattled off figures related to debt and spending and demonstrated a fluency with government and international policies that dates back decades.

He converted currencies on the fly. He spoke with ease about the importance of social media in his upset win in May elections that led to the nation’s first change of party power since independence from Britain in 1957.

After more than an hour of back and forth with the audience, he looked disappointed that it had ended. His demeanor was that of a man who relished returning to a job he never expected to have again.

Asked about his physical and political stamina, he said: “I don’t really know.” He acknowledged two heart operations and the occasional cough, “but I have my doctor following me everywhere I go.”

All the while, he tapped into a deep vein of knowledge and experience won from being a high-level political player in Asia and the world for the last seven decades.

Though he dodged the occasional thorny topic – a question about gay rights and child marriage in Malaysia, for instance – he deftly handled almost everything thrown at him.

He talked about what it was like for countries other than China and the United States to be caught in the middle of the behemoths’ growing trade war (uncomfortable). He spoke of the absolute necessity of free sea passage so that Malaysia can pursue its trading lifeblood, and of the region’s disputes with China over control of the South China Sea.

Asked about Chinese President Xi Jinping’s hallmark “Belt and Road Initiative” to build ports, highways and other trade-related infrastructure, Mahathir said he had long ago suggested the rail part of it. He’d proposed that Beijing build a railway line with bigger, longer trains from China to the West: “The idea is not new to us.”

His remarks were peppered with jokes. The funniest one – “I have been known as a dictator, but I don’t think any dictator would have resigned” – was so good he used it twice, and some of the jokes had the feeling of being well-worn campaigning set pieces.

But unlike a lot of politician’s attempts at humor, they worked – repeatedly – and he drew energy as his moments in command of the stage passed. A smattering of his quips:

– On what he said was the previous government’s slogan, “Cash is King”: It’s “practically admitting to the world that bribery is OK.”

– On U.S. President Donald Trump: “We are still trying to figure out what is it that the president of the United States wants, because sometimes he changes his mind three times a day.”

– On whether Malaysia would one day allow dual citizenship: “Well, we think you should make up your mind.”

He focused on Malaysia’s corruption problem, which he almost entirely blamed on the government that he drove from power in May. Mahathir’s designated successor, Anwar Ibrahim, and Mahathir put aside their 20-year-old political feud to help their alliance win those elections.

Mahathir rose again to prime minister amid anger over a massive corruption scandal involving the 1MDB state fund, which is under investigation in the United States and other countries for allegations of cross-border embezzlement and money laundering. Former Prime Minister Najib Razak, 65, has accused Mahathir’s government of seeking political vengeance.

When Rudd asked impishly about when the next elections would be, Mahathir seemed almost wistful. He smiled and said, “five years from now.”

But this time, the man who has lived through nearly a century hastened to add, he plans to retire for good. 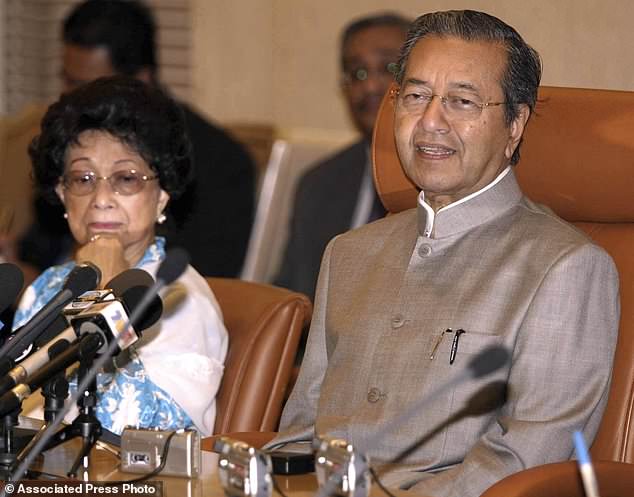 FILE – In this Oct. 31, 2003 file photo, Malaysia’s Prime Minister Mahathir Mohamad sits with his wife, Siti Hasmah, as he attends his last news conference as prime minister at his office in Putrajaya, at age 77, before retiring from a 22-year reign. In 2018, the 93-year-old once-and-current prime minister of Malaysia is clearly relishing return to power. (AP Photo/Andy Wong, File)