Former First Daughter Sasha Obama’s budding romance with her new boyfriend has only just been revealed to the public – but it seems her beau, Clifton Powell Jr., is already being treated as a welcome member of her family.

The former college basketball star was seen spending time with Sasha’s older sister Malia in Los Angeles on Sunday, with the pair enjoying a casual stroll through a public park together, before taking a brief break so the former First Daughter could smoke a cigarette.

Both Malia, 23, and Clifton, 24, were dressed casually for their laidback outing; former President Barack Obama’s eldest child sported a pair of baggy blue jeans and an oversized grey Chicago White Sox T-shirt in a touching nod to her famous parents.

Michelle, 58, was born and raised on Chicago’s South Side, while Barack, 60, spent several years living and working in the city, where the family still owns a home.

Malia – who is currently working on the writing team for Donald Glover’s new Amazon project – wore her long hair in braids, and she carried a cream tote with photographer Lorna Simpson’s name on it, as well as a white HydroFlask water bottle. 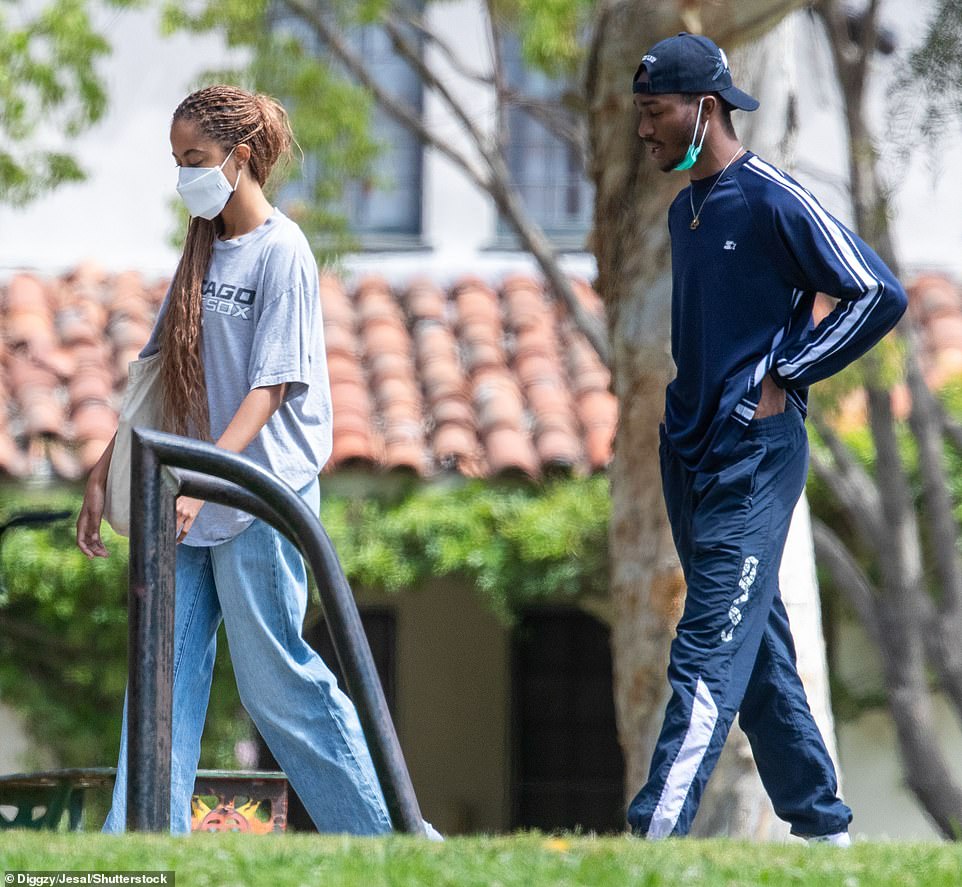 Malia, 23, and former college basketball star Clifton, 24, were pictured strolling through a public park together – just days after DailyMail.com exclusively revealed that he was dating Sasha, 20 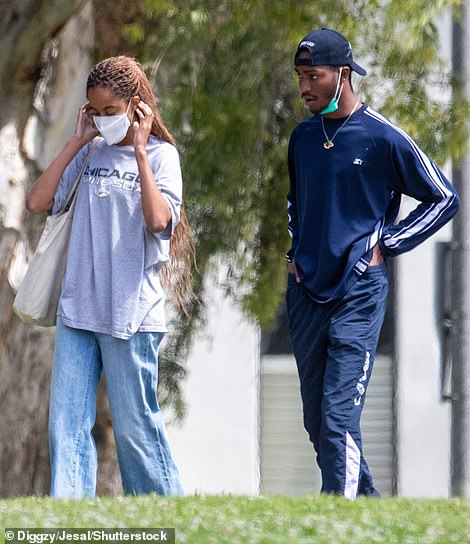 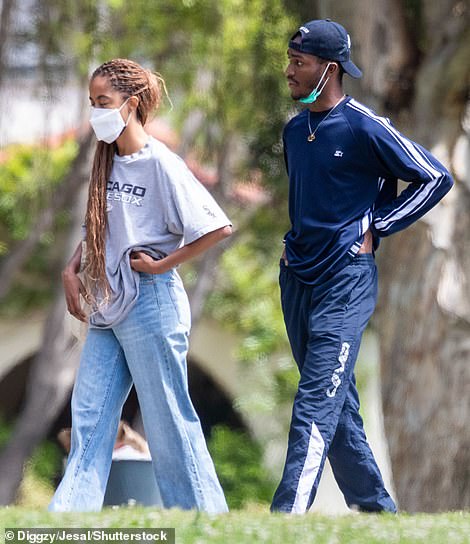 Both Malia and Clifton were dressed casually for the outing; the former First Daughter paid tribute to her mother Michelle’s hometown of Chicago, wearing an oversized Chicago White Sox T-shirt with a pair of baggy jeans 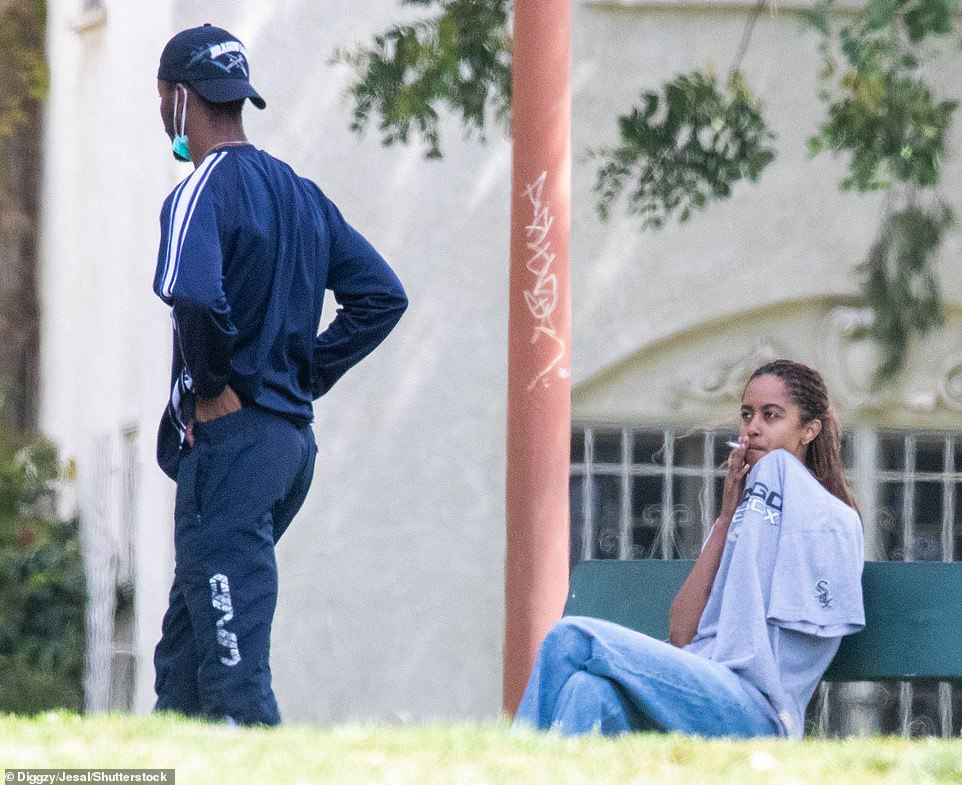 At one point, the duo paused their walk by a park bench so Malia could smoke a cigarette, while Clifton remained standing 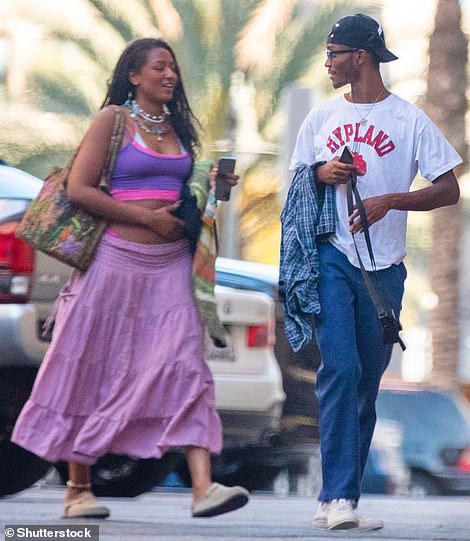 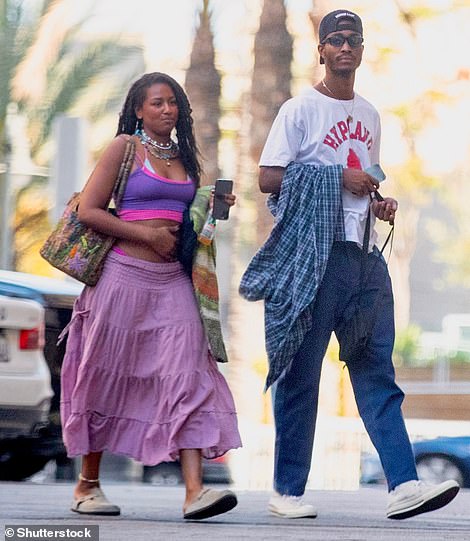 Malia and Clifton’s outing comes just days after he and Sasha were seen out in public together for the first time, having reportedly met when the younger Obama sibling transferred to USC from the University of Michigan last year

She completed her low-key look with a pair of clogs from Birkenstock – the same style that her younger sister Sasha wore when she and Clifton were photographed out in public together for the first time last week.

Meanwhile Sasha’s boyfriend opted to keep his face mask down around his chin, and he wore a sporty look, pairing a long-sleeved navy shirt with a pair of matching sweatpants, white socks, and white striped slides.

He completed his ensemble with a backwards baseball cap, and he modeled a gold necklace that hung out from under his T-shirt and like Malia, he also carried a tote bag over his shoulder.

The duo looked very relaxed and comfortable around one another as they walked through the park, before coming to a rest at a bench, where Malia smoked a cigarette, while Clifton remained standing.

Malia appeared to get a bit chilly during the outing and was seen pulling her arms inside her T-shirt as she puffed away on her cigarette.

At one point, the former First Daughter pulled on a white face mask, which she was seen adjusting behind her head as she and Clifton made their way through the grassy park area – however she removed the face covering for her smoke break.

The pair were unaccompanied on their walk, affording them plenty of privacy; both Malia and Sasha lost their Secret Service protection when their father left the White House, although as a former President, he and Michelle are guaranteed security for the rest of their lives. 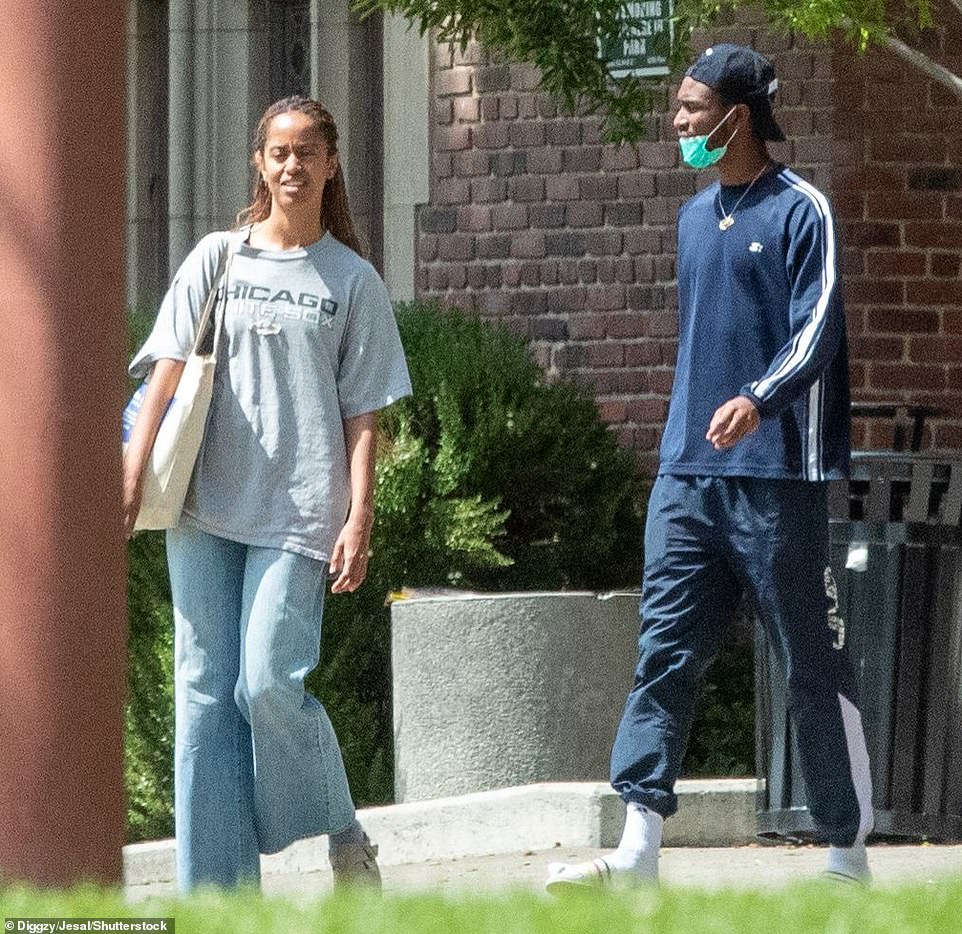 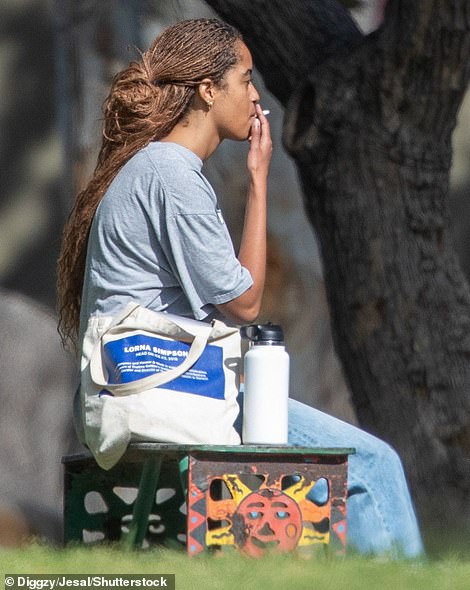 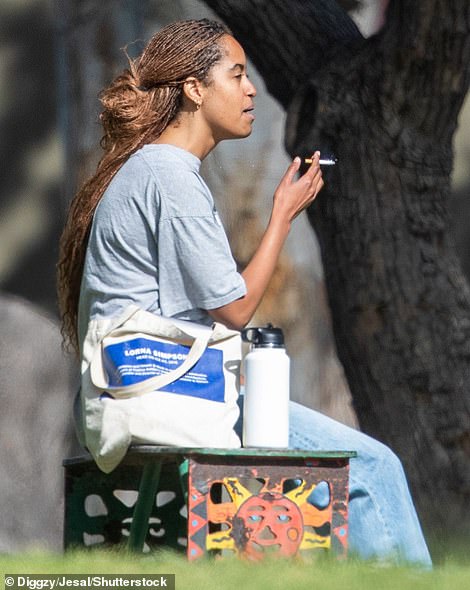 Malia happily puffed on a cigarette, while Clifton stood alongside her 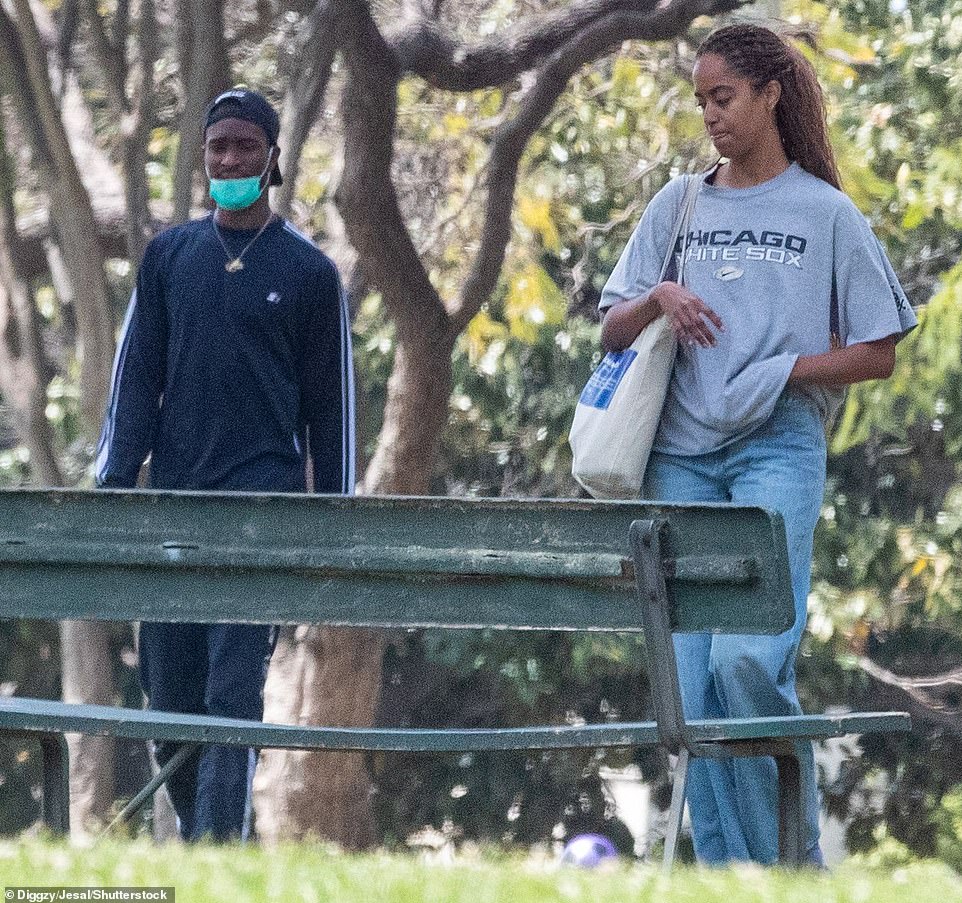 It is unclear where Sasha was during the outing, however it may be that she was busy with college commitments. Her sister graduated from Harvard and has since landed a job working for Glover 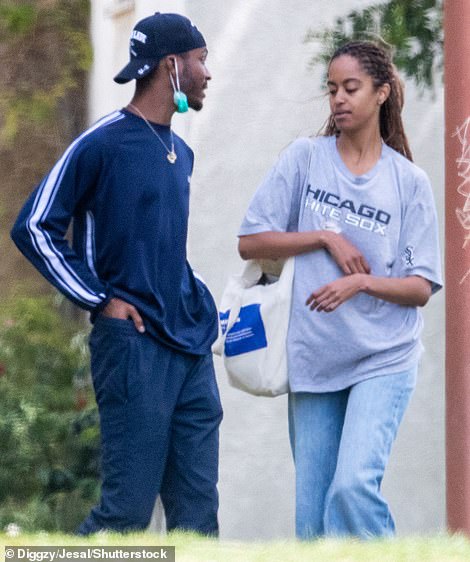 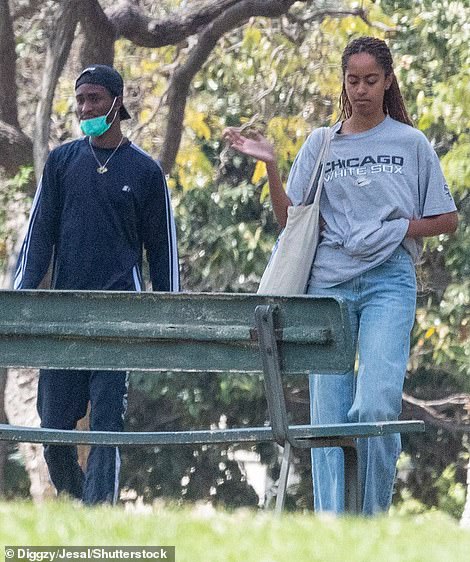 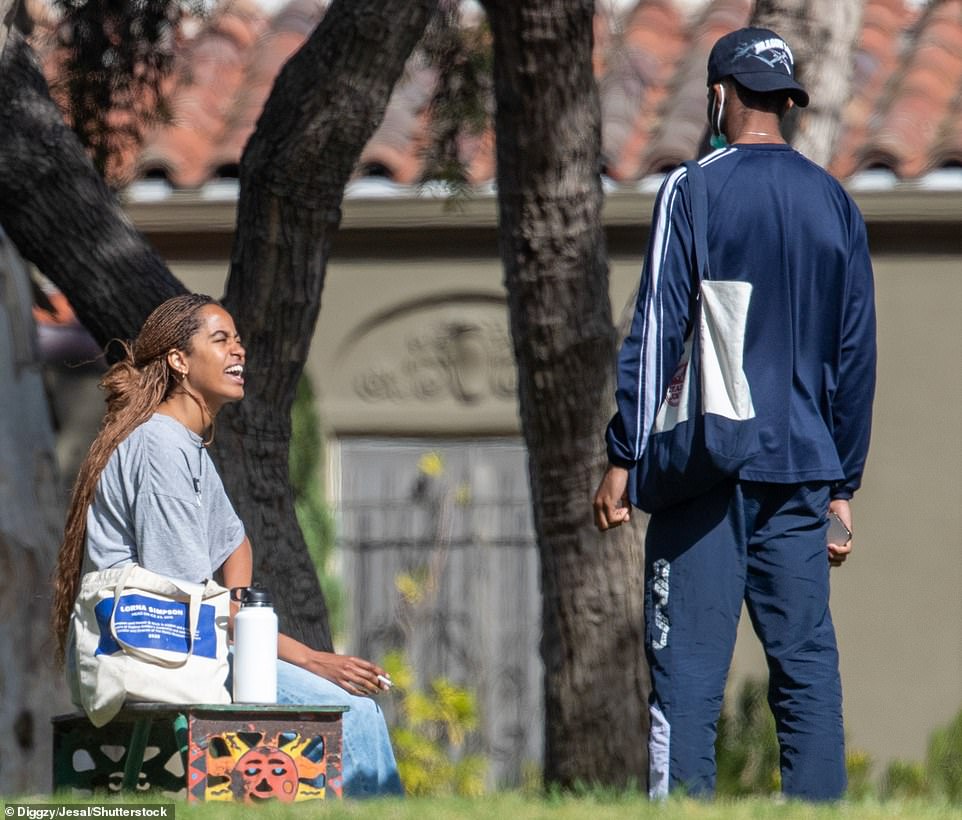 Like Malia, Clifton was dressed casually, wearing a long-sleeved navy T-shirt, a pair of matching sweatpants, white socks, and a pair of striped slides on his feet

But while former Presidents and their spouses are granted Secret Service protection for life, even after they have left the White House, that same policy only covers children who are under the age of 16.

The Obama sisters lost their Secret Service protection shortly after their father left the White House, however they are often seen accompanied by agents whenever they are in the company of their mother and father.

Malia’s and Clifton’s friendly outing comes less than a week after DailyMail.com exclusively revealed that the son of Ray actor Clifton Powell, 66, was in a relationship with Sasha, who is currently a student at the University of Southern California.

Clifton and Sasha are understood to have met after she relocated to the West Coast last year, having left the University of Michigan in order to transfer to USC.

Both Sasha and Malia are now based on the West Coast – so it’s likely that the older Obama sibling has had plenty of opportunity to spend time with her sister’s new beau.

While Malia has been dating Brit Rory Farquharson since meeting him at Harvard in 2017, Sasha’s relationship is far more recent – however they already have at least one thing in common: famous fathers.

Clifton is the second child of his actor father – who has starred in multiple TV shows and movies over the years, including Ray, which he featured in alongside Jamie Foxx. 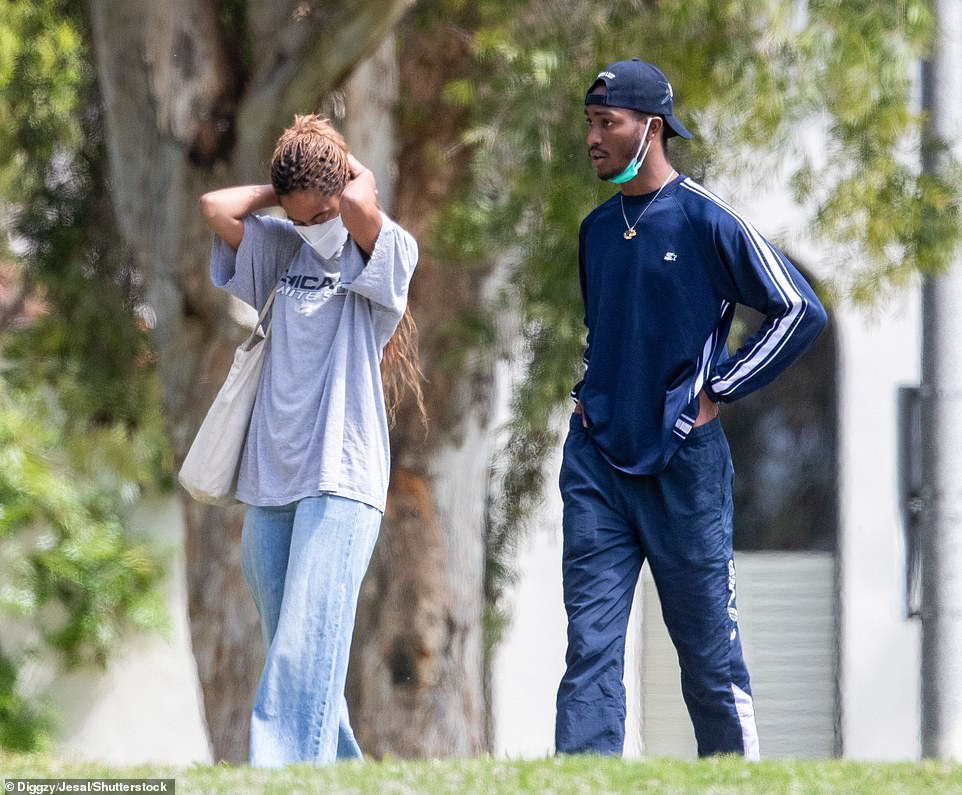 At one point, Malia put a white face mask over her mouth and nose – although she later removed it to smoke 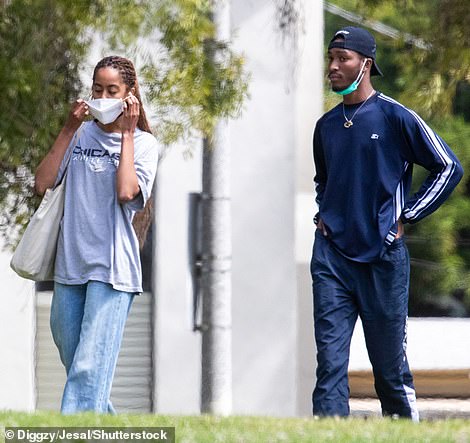 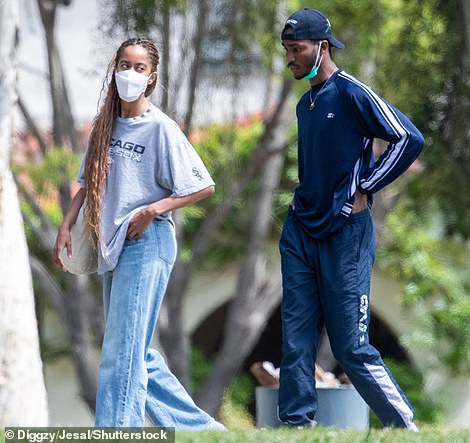 The budding screenwriter works in a similar industry to her sister’s beau; while Malia is working on the writing team for an unnamed Amazon project, Clifton is a commercial director who has teamed up with brands like Nike and Peloton 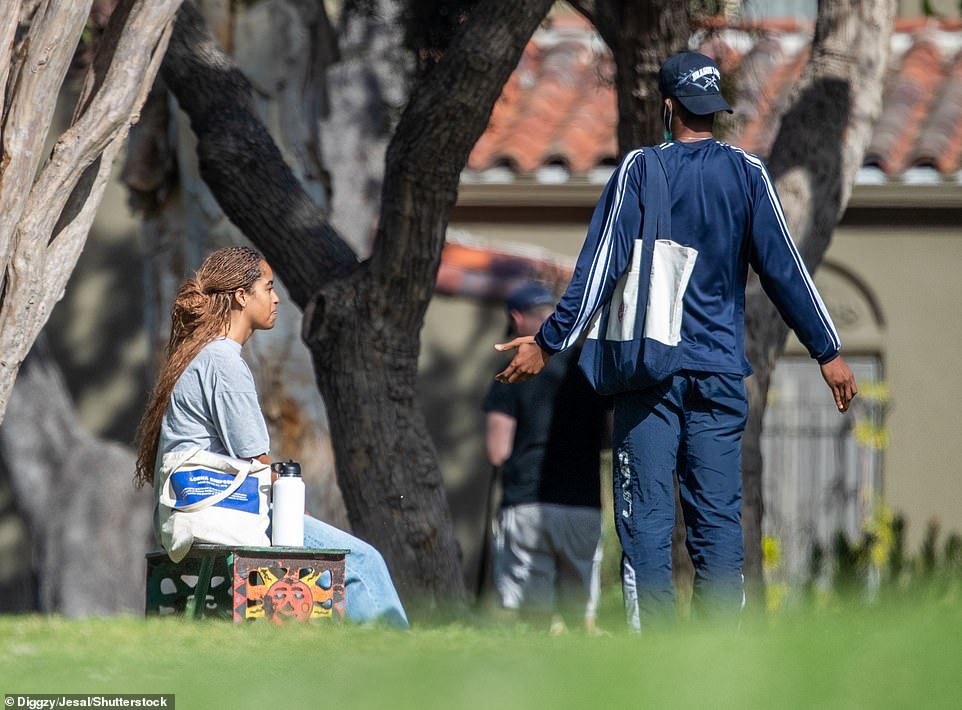 Malia carried a tote that had the name of photographer Lorna Simpson on it, while Clifton was carrying a bag from grocery store Trader Joe’s 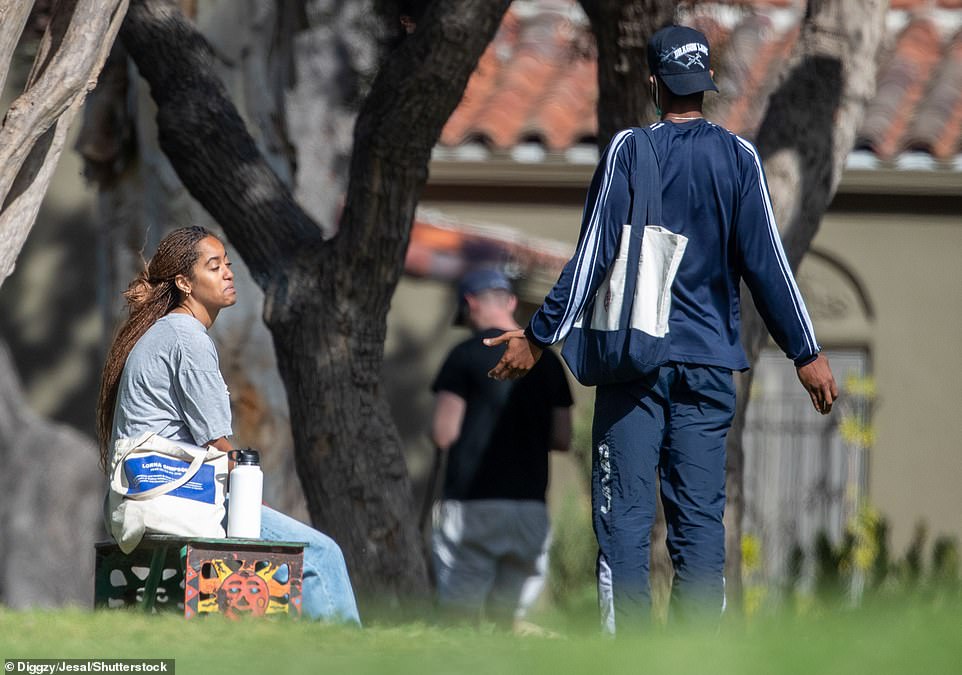 The pair appeared to be having a very animated conversation that saw Clifton gesturing with his arms, while Malia made several different expressions 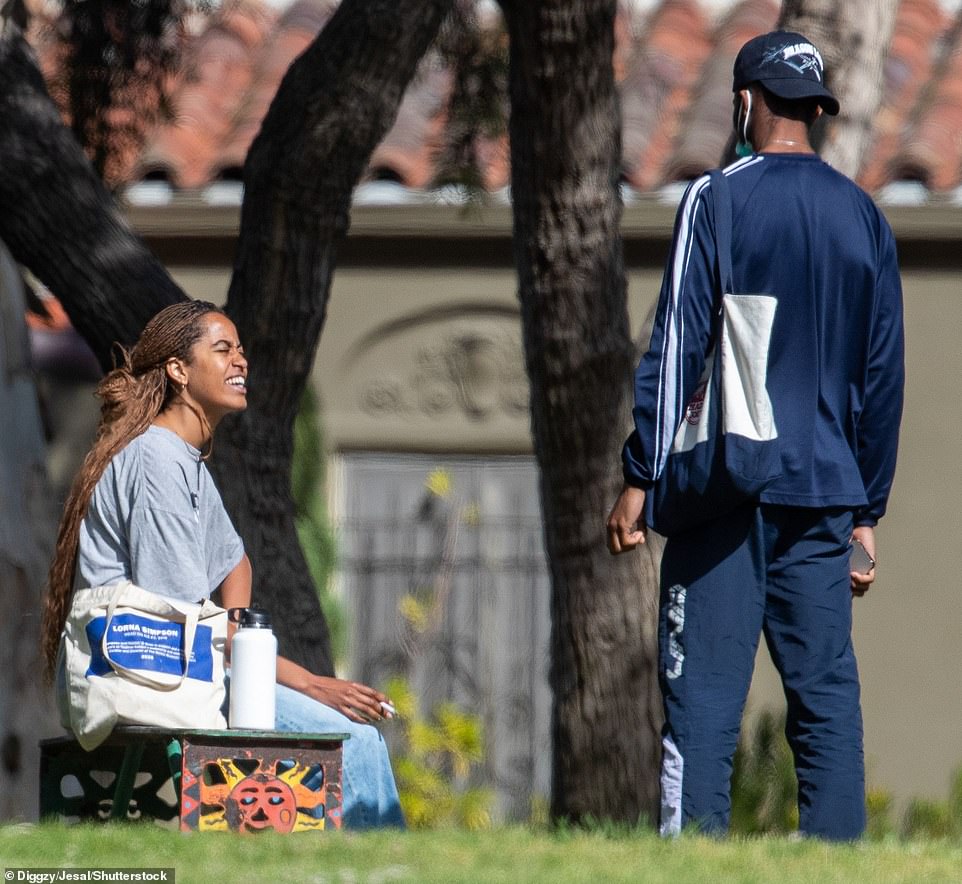 It is now known how long Clifton and Sasha have been an item, but given how close the sisters are, it seems likely that Malia and her sibling’s beau know each other well 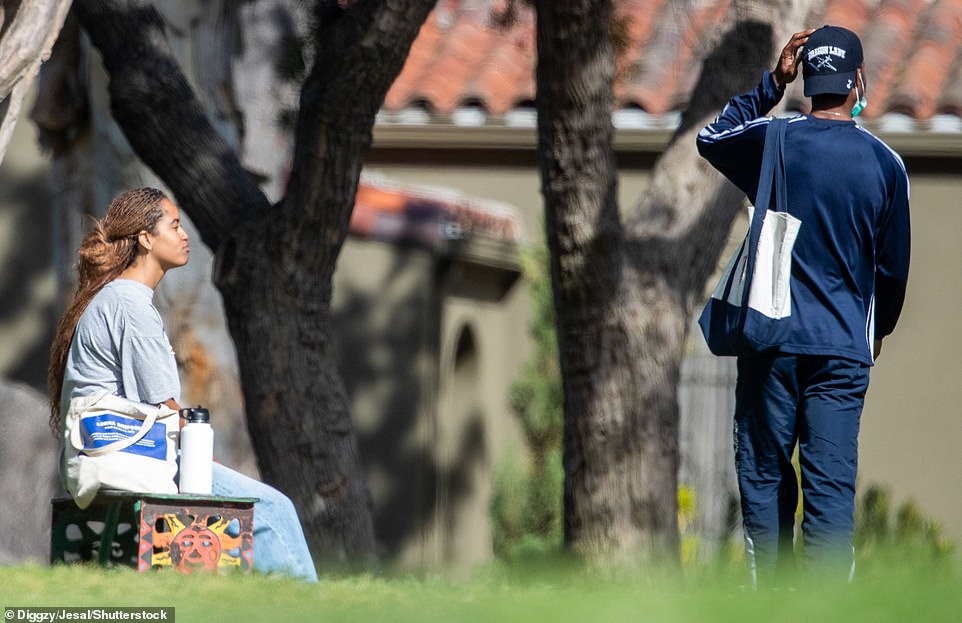 Malia moved to Los Angeles to pursue a writing career after graduating from Harvard, where she met her own boyfriend, Rory Farquharson, in 2017

The former college basketball star was raised in the upscale California neighborhood of Ladera Heights and he was educated at Village Christian High School in the San Fernando Valley – a private school that charges $28,340 a year and offers ‘an excellent Christian education.’

According to its mission statement, the school focuses on making religion a central part of students’ lives, continuing: ‘It is our desire that every student comes to a point where Christ is at the center of their life, influencing every thought that they have and action that they make. In so doing, they will be equipped to spread His Word even further.’

After graduating, Powell Jr. was awarded a four-year basketball scholarship at the University of California at Santa Barbara, however he transferred out of the college team after less than a year in order to focus on his work in film, which he now pursues as a career, having landed himself a job as a commercial director.

In the years since, Clifton – who goes by the nicknames ‘Cliff’ and ‘CP3’ – has worked with big-name brands like Nike and Peloton.

While it is not known exactly how long Clifton and Sasha have been together, his close bond with her sister Malia suggests that he has been happily embraced by the whole family – including matriarch Michelle, who let slip during an appearance on Ellen last week that both of her daughters had boyfriends whom she had met.

‘Now they’re bringing grown men home,’ she said of her two kids while marveling at just how much they have both grown up.

‘Now they have boyfriends and real lives and all that stuff. They have grown up right before our very eyes and they are doing well.’

Michelle may well have spent time with Clifton when she visited Los Angeles to see her daughters last month; the trio were seen hanging out at celebrity-loved restaurant Mother Wolf, however it’s unclear whether Sasha’s boyfriend was invited to join them. 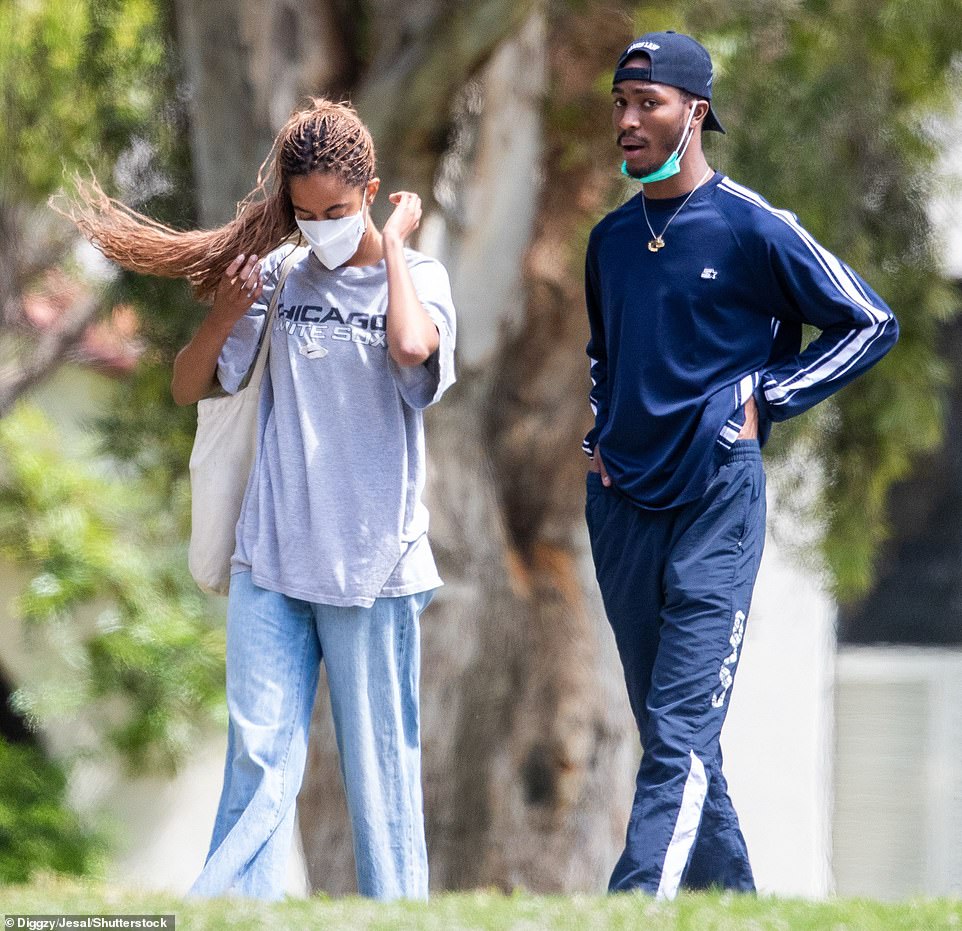 Clifton has one key thing in common with both Sasha and Malia: a famous father. The commercial director is the second child of Hollywood actor Clifton Powell, who starred alongside Jamie Foxx in the hit movie Ray 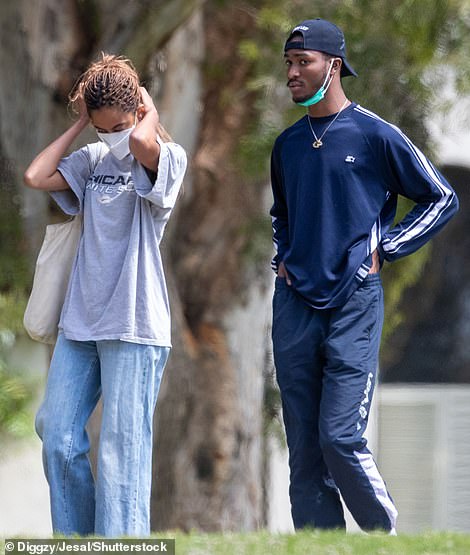 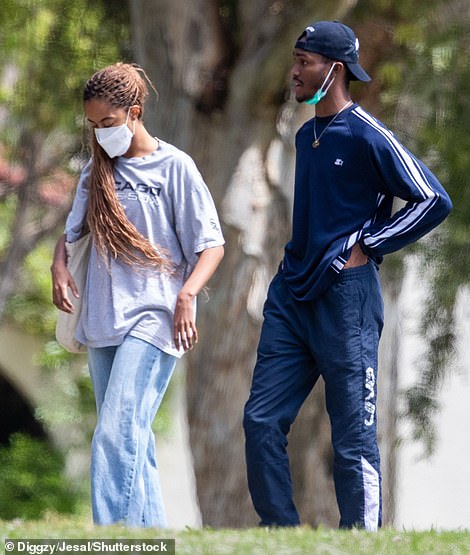 Clifton was raised in the upscale California neighborhood of Ladera Heights and he was educated at Village Christian High School in the San Fernando Valley – a private school that charges $28,340 a year and offers ‘an excellent Christian education’ 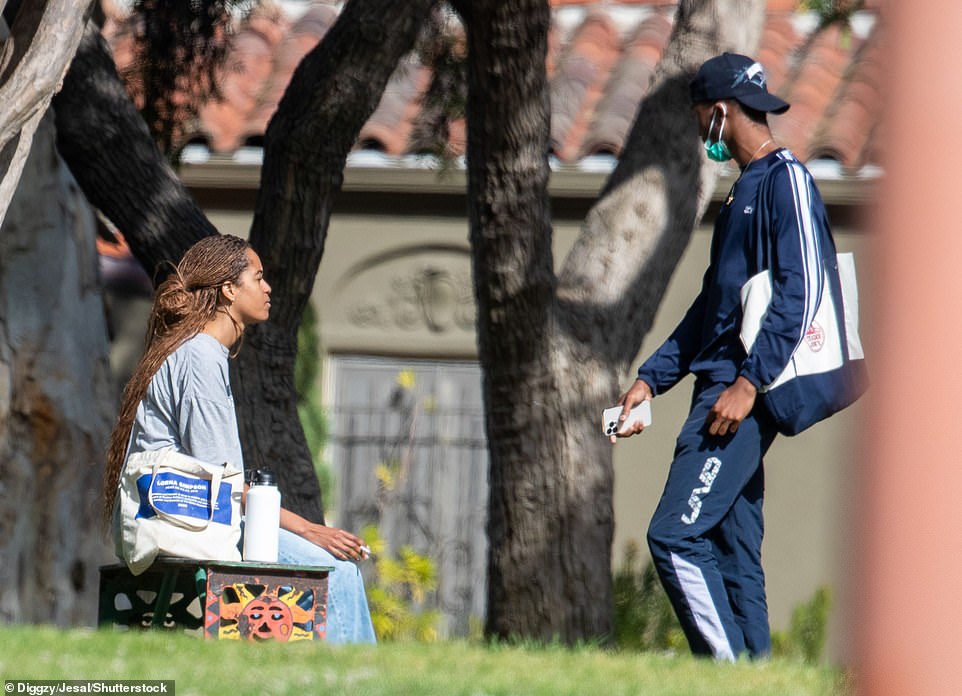 Sasha and Malia’s mother Michelle let slip earlier this month that both of her daughters had boyfriends during an appearance on Ellen, saying: ‘Now they’re bringing grown men home,’ she said. ‘Now they have boyfriends and real lives and all that stuff’ 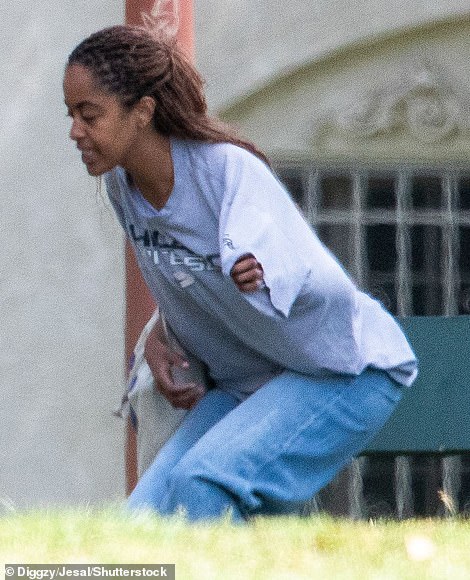 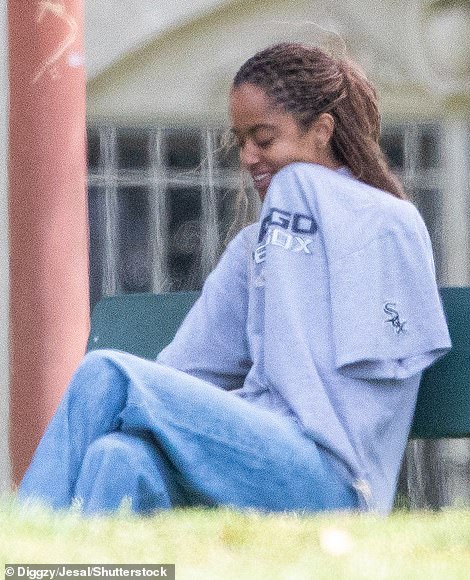 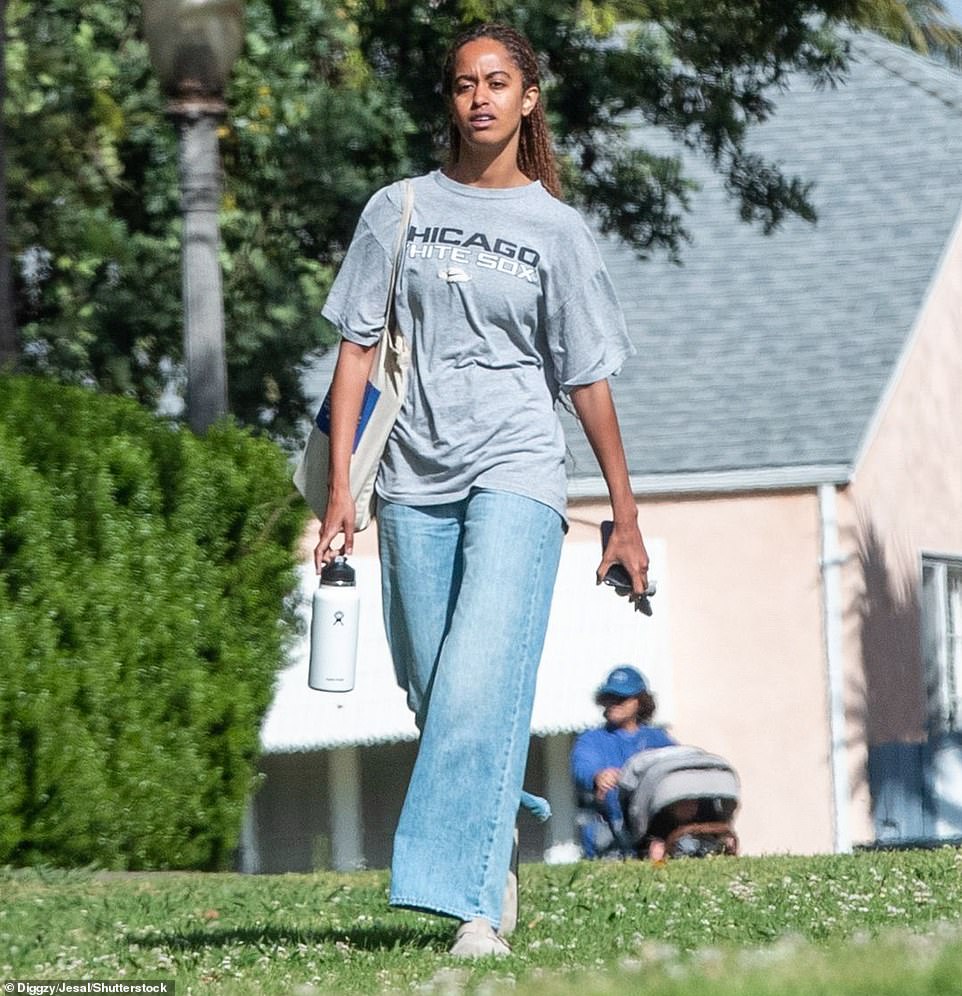 Sasha and Malia appear to be relishing their new lives on the West Coast; as well as hitting up hotspots like Mother Wolf, they have also been seen spending time exploring their new hometown, even embarking on a hike together last month.

However, in addition to their busy social schedules, Malia and Sasha are also both focusing on their futures in Los Angeles.

Earlier this year, it was reported that Malia, who graduated from Harvard in the spring of 2021, had scored a position on the writing staff of a new Amazon project by Donald Glover, who confirmed her as a hire during an interview last month.

The multihyphenate, who is also known by his stage name Childish Gambino, was at the season three premiere of his FX series ‘Atlanta’ when he confirmed reports that he had recruited the Harvard University graduate to work in the writers’ room on his latest project.

The actor is writing and executive producing the upcoming Amazon series — potentially titled ‘Hive’ — that is reportedly about ‘a Beyoncé-type character.’

Glover did not reveal how Obama — who interned on Lena Dunham’s HBO series ‘Girls’ in 2015 and at The Weinstein Company in 2017 — landed the job after she graduated from college last year.

His younger brother Stephen Glover is also working on the upcoming Amazon project, and he said they were interested in ‘hearing her stories and having her work with them,’ which suggests they may have approached her about the position. 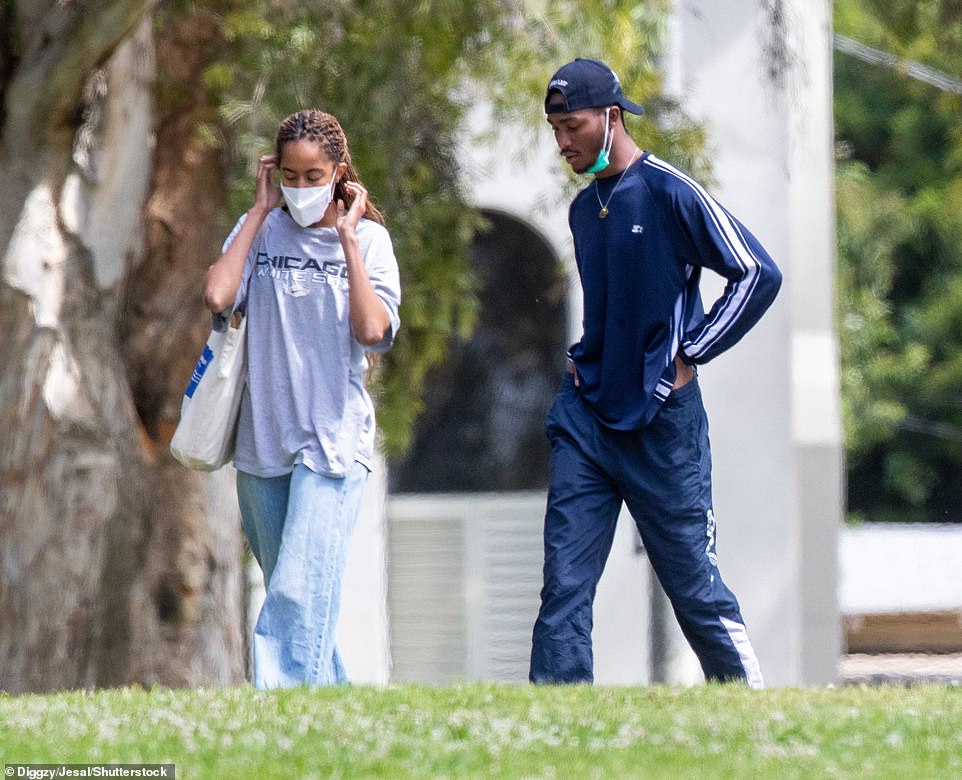 Glover believes Obama has a promising future in the industry, telling the publication, ‘I feel like she’s just somebody who’s gonna have really good things coming soon.’

‘Her writing style is great,’ he added.

Malia has long shown an interest in filmmaking before signing on to work for Glover; she interned on the set of Extant in high school and with The Weinstein Company in 2017.

Meanwhile Sasha is believed to have transferred to a school in California, after initially matriculating at the University of Michigan, where she first enrolled in 2019.

Rumors on social media suggest that she is now a student at the University of Southern California, with one Twitter user posting in November that Sasha had ‘left Michigan for USC’.

If Sasha did, in fact, transfer, her classmates certainly seem to be respecting her privacy, as the move has been kept fairly under-the-radar.

Despite moving to Los Angeles, the girls have had regular catch-ups and reunions with their parents, who are still spending some time in Washington, D.C., where they own a sprawling home; the couple also owns an enormous $12 million mansion in Martha’s Vineyard.

Sasha and Malia both joined their parents for the family’s annual holiday getaway in Hawaii back in December, when they were seen spending some time in the ocean with their watersport-loving father, Barack.