For Rangers the timing was everything.

With seconds left to play of the five added minutes hopes of qualification for the group stage of the Champions League were draining fast. Ball after ball was launched into the area. Two goals ahead, Malmo clung on for dear life.

After an indifferent display Rangers needed a get out of jail card. The dice finally rolled their way after 94 minutes and 50 seconds as Polish referee Szymon Marciniak raised his whistle to his lips to signal the end of the first leg.

Ryan Kent laid the ball into the path of the veteran midfielder Steven Davis and, at 36, the Northern Irishman still knows how to strike a ball.

A rising shot from 20 yards took a significant deflection before spinning inside the post. After a rusty performance, Rangers were mighty glad of the break. Make no mistake, the Davis strike changed everything.

This was a first defeat in a European qualification game for Steven Gerrard after 20 games.

Yet the difference between losing 2-0 and losing 2-1 needs no explaining. Away goals are less significant than they used to be, but for Rangers this one was truly huge.

When it comes to dismissing Malmo Scottish football is now a repeat offender. The name of Sweden’s most successful club comes out of the hat, it’s written off as a decent draw and two weeks later the coefficient takes another bruising dent. One day, perhaps, people will learn.

Not since 1970/71 have Sweden’s champions lost to a Scottish club over two legs. They sunk Ronny Deila’s Celtic reign, thrashed Hibs 9-0 on aggregate and celebrated the tenth anniversary of knocking Rangers out of the Champions League in season 2011-12 by threatening the repeat the feat. 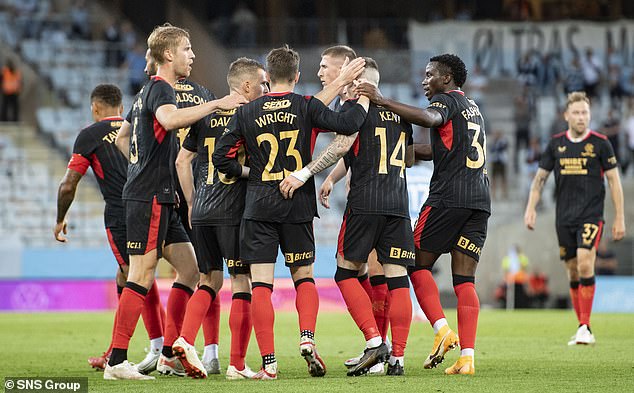 A one goal deficit is significantly easier to overcome at Ibrox next week than 2-0. Yet, to line up a play-off against Olympiakos or Ludogorets Rangers must play better than they did here. Without Alfredo Morelos and the suspended duo of Glenn Kamara and Kemar Roofe they fell below the high standards of last season.

Two goals in two minutes early in the second half from Soren Rieks and Veljko Birmancevic came as a shock to the system. For long spells of last season Rangers barely lost one goal over 90 minutes, let alone two goals in two.

Where Jon Dahl Tomassen’s Malmo are 13 games into their league season, Rangers entered this tie with one competitive outing to their name. By the second leg they will have more running in the legs. It would help no end, as well, if Alfredo Morelos was available to lead the line.

A key figure in the European success of Gerrard’s team in recent seasons neither Cedric Itten or replacement Fashion Sakala came close to matching the Colombian’s hold up play.

The shock of the quick Malmo one two was amplified by the fact that Rangers were comfortable in a goalless first half.

Despite ahostile stadium, there was no drama. There was nothing to scare the horses. Nothing at all to hint at what was to come.

Sure, an under-strength starting eleven didn’t quite look themselves. But neither did they look unduly troubled by the Swedish champions. For 45 minutes Allan McGregor really had nothing to do.

Itten was an adequate replacement for the absent Morelos up front , without being outstanding

New signing John Lundstram had come in for the banned Kamara and looked looked steady. What Rangers probably missed most with the invention and quick geet of Joe Aribo, the midfielder left on the bench. Without Kamara their midfield three were all a bit flat.

In James Tavernier Gerrard had the most dangerous attacker on the pitch. In the first half, at least, if not the second.

The captain’s deep cross landed at the feet of Scott Arfield and, if he’d taken it first time the midfelder might have tested Malmo keeper Dahlin.

Before half-time Tavernier brilliantly turned defence into attack to create a very decent chance for Ryan Kent. A brave, sliding Lasse Neilsen block prevented a goal, but Rangers looked the more threatening team. Had the Polish referee looked more kindly on a penalty claim for Kent they might even have eked out a lead.

Other than a hopeful 20 yard shot from Celtic reject Jo Inge Berget Malmo hadn’t really threatened at all. Returning to his home city and first club Filip Helander could have spent the first half waving to relatives in the crowd while smoking a Cuban cigar.

That’s what made the lapse in the opening minutes of the second half so unexpected. It was a collapse no one saw coming. Two goals in two lightning minutes after the restart came from absolutely nowhere.

Malmo’s strength lies in their pressing and harrying. They hadn’t done it so much in the first half, but they came flying out of the traps for the second.

The first goal after 47 minutes was a peach of a finish. Rangers were all over the place as Veljko Birmancevic stood up a cross to find Soren Rieks completely unmarked in the penalty area.

Why a full-back was even there only he can say; yet no one could argue with the brilliance of the first time volleyed finish. The first time McGregor saw it was when it hit the back of the net. 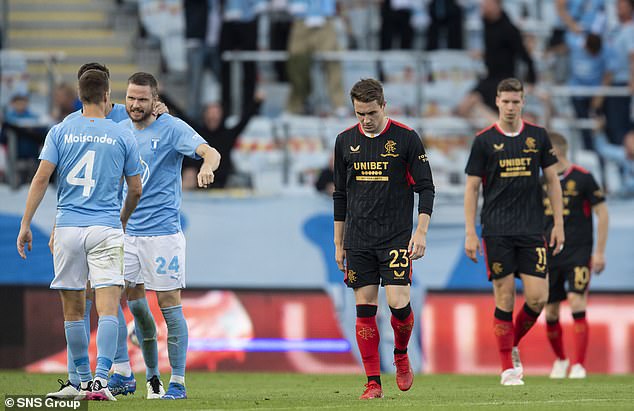 Rangers were still composing themselves when Malmo snatched a second.

So compact and so disciplined last season Rangers had faced nothing to match the home team’s hassling and harrying.

Carelessly they gave the ball away, calamitous defending gifting the ball to Anders Christiansen.

Goldson failed to cut out the captain’s through ball and Birmancevic – creator of the first – tucked the ball calmly in off the inside of the upright. From nothing Malmo were two ahead, Rangers shell-shocked.

The introduction of Sakala for Itten was an attempt to introduce pace to the attack. It almost paid of when Scott Wright broke clear on the left, a cut back picking out the new signing from Oostende. The ball deflected wide for a corner, but Malmo were tiring and Rangers entering their best spell in the game.

The Davis strike at the last replaced despair with real hope. Yet this was a 90 minutes when Scottish football was reminded of an old truth. Ahead of the second leg in Glasgow only a fool would write off Malmo.