Malta is more than just beaches and cheap breaks

Gozo and Malta are to Roman Catholicism what Liverpool is to football. If you’re not a churchgoer, you’re the odd one out.

During the big religious feasts, thousands take part in lengthy processions, dressed up as Gospel characters. Life-size statues are carried through the streets in solemn ceremonies that can last half a day.

And it’s not unusual to spot Pontius Pilate or Mary Magdalene having a quick ciggie outside a bar.

Art on the horizon: Malta’s capital Valletta will be European Capital of Culture in 2018

Overall, this sort of spectacle captures the essence of Malta, a tiny country just south of Sicily consisting of an archipelago of three inhabited islands: Malta (pop. 424,000), little Gozo and tiny Comino.

During 164 years of British rule, the Maltese learned all about potatoes, stews and roasts. Cars drive on the left. Electric sockets are British-style.

Many will proudly display a black-and-white photo of the country’s most famous former resident, HM the Queen, but today’s Maltese are republicans, ardent fans of Brussels and avidly preparing for their city Valletta to become European Capital of Culture in 2018.

Everyone speaks English fluently, but locals speak to each other in Maltese, an Arabic language that uniquely uses the Roman alphabet. The word for Gozo is written Ghawdex, but pronounced ‘owdesh’.

The Italians have imported pizza and pasta and wine. Neighbouring Africa has given them a taste for couscous and spices. The local delicacy is fried rabbit.

It’s a kaleidoscope. And they seem to like children. We were two grown-ups and two children aged 14 and nine.

You can please everyone by mixing sightseeing with activities. 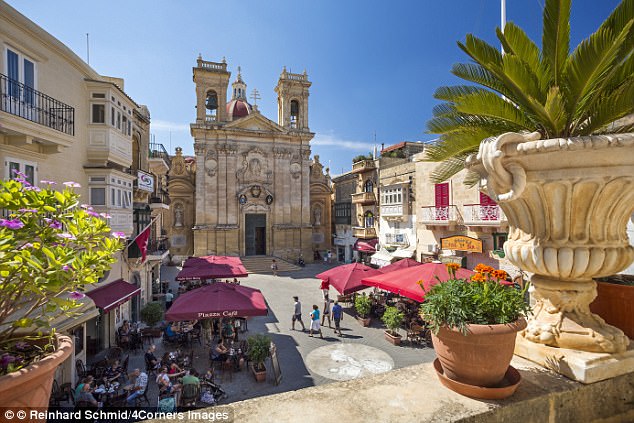 Funky cold Mdina: The ancient citadel of Mdina is another of Malta’s essential sights

There are six sights you can’t miss. First, the Hypogeum, an underground burial site carved out of the rock more than 5,000 years ago. Second, St John’s Co-Cathedral in Valletta, with its wonderful painting The Beheading Of Saint John The Baptist by Caravaggio. Third, the heart of Valletta, narrow, beautiful and old.

Fourth, the ancient citadel of Mdina, if possible by night. Fifth, the three fortified cities of Birgu, Senglea and Cospicua founded by the Order of Saint John in the 16th and 17th centuries.

And, last, the neolithic temples of Gozo with their astonishing similarities to the thrilling new discovery of contemporary remains in Orkney at the Ness of Brodgar. These provide yet more evidence that humanity is smarter than we could ever believe and that 5,000 years ago there was a European civilisation to match the Egyptians.

As for activities, one of the best is also the simplest: walking. Malta and Gozo are latticed by meandering footpaths. With our two boys, we walked nearly the entire Gozo coastline through dazzling carpets of clover, fennel, borage, dwarf irises, thyme, asparagus and wild snapdragons, stopping at beaches and examining the now-collapsed Azure Window that features in the film Clash Of The Titans and serves as the backdrop to the Dothraki wedding scene in the TV adaptation of Game Of Thrones.

We swam in the chilly sea. Many others in wetsuits were scuba diving. Two of us one evening hired horses and rode through a scarlet valley of wild poppies. 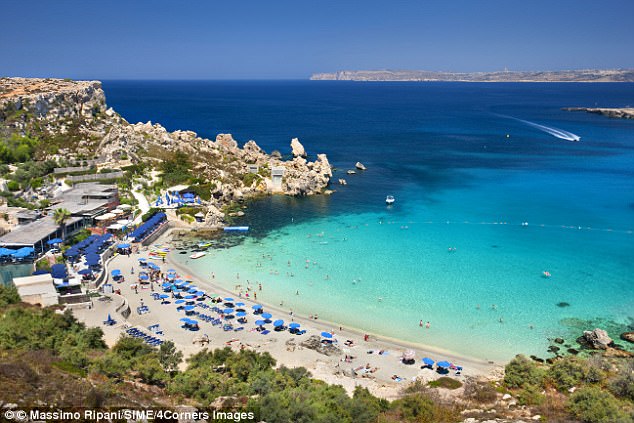 A peach of a beach: Paradise Bay, on Gozo, is one of Malta’s many lovely beaches

Best of all, we met rock-climbing professional Stevie Haston, who can be booked through Gozo Adventures. With his lovely partner Alex, he cajoled the whole family up rough-hewn limestone cliff faces as if we all had Spider-Man’s powers. Day trips to Gozo from Valletta are easy, with the car ferry only taking 20 minutes.

On Gozo, make time to eat at what must be one of the most delicious, least pretentious restaurants in Europe, Ta’ Philip, near the harbour, and make sure to try Gbejna tal-bzar, a sheep’s milk cheese dried in a north wind, soaked in wine vinegar and preserved in pepper.

Wash it down with a glass of Gozitan Vermentino. Marvellous.

On our last night we went to a procession, one of Malta’s most famous, in the village of Zejtun. The entire Bible seemed to come alive. Jesus, Pilate, Caesar, Saul, Salome, Abraham, Isaac and the goat. For an hour or so the children were spellbound.

Suddenly, Herod looked distracted. Shimmying into the shadows he reached into his sleeve.

I was sure it would be a dagger. But no, something more terrible: a Samsung smartphone.

The InterContinental Hotel in St Julian’s has doubles from £112 a night (ihg.com). Flights to Malta cost from £62 with EasyJet (easyjet.com).