Mia Freedman has opened up about her battle with mental illness and the three strategies she uses to keep it under control.

The businesswoman and digital media entrepreneur credits much of her success to keeping her diagnosed anxiety disorder in check by taking the anti-anxiety drug Lexapro, a strict exercise regime and eight hours’ sleep each night.

The 49-year-old knows without the combination of all three, her life could look and feel very different.

‘I have anxiety and I treat it each day with Lexapro, which I love,’ she said before repeating a rhyme first coined by American author Glennon Doyle.

‘Jesus loves me, this I know, because he gave me Lexapro,’ Freedman told a crowd of 140 at a women’s empowerment luncheon hosted by Entourage Finance in Melbourne.

Mia Freedman has juggled parenting while creating her successful website, Mamamia, and battling anxiety. The Mamamia editorial director was the keynote speaker at a women’s empowerment luncheon hosted by Entourage Finance in Melbourne, celebrating the successes of Australian women throughout the Covid pandemic 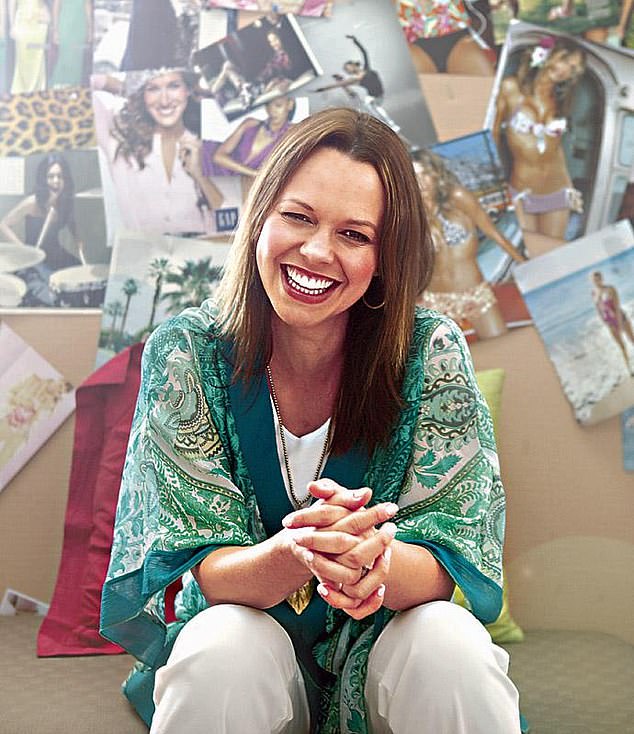 Mia Freedman in 2015 when she was working as an editor. She says anti-anxiety medication, daily exercise and 8 hours’ sleep keeps her mental illness in check 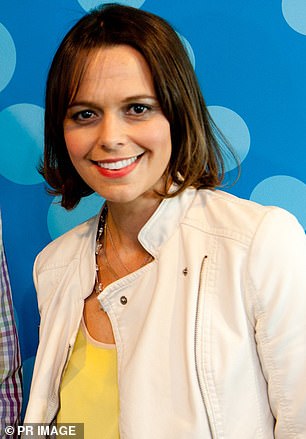 The Mamamia editorial director was the keynote speaker, celebrating the success of Australian women throughout the Covid pandemic after Entourage Finance found 65 per cent of people they approved to buy houses in 2020 were female.

At 24 years old, Freedman had climbed to the top of her field and was promoted to become the youngest editor of Cosmopolitan magazine.

She has gone on to create her own women’s website, Mamamia, has three children and is a published author.

During her speech, Freedman shared her inspiring story of juggling motherhood, her career and her mental health over the years.

When she was 19, Freedman was hired by Lisa Wilkinson as an intern at Dolly magazine.

She rose quickly through the ranks to become a fashion editor at the title before freelancing for a period and then becoming the editor of Cosmopolitan aged 24.

Freedman and Wilkinson maintained a close personal and professional relationship over the years, and Freedman still credits Wilkinson as one of her biggest motivators and inspirations in the industry. 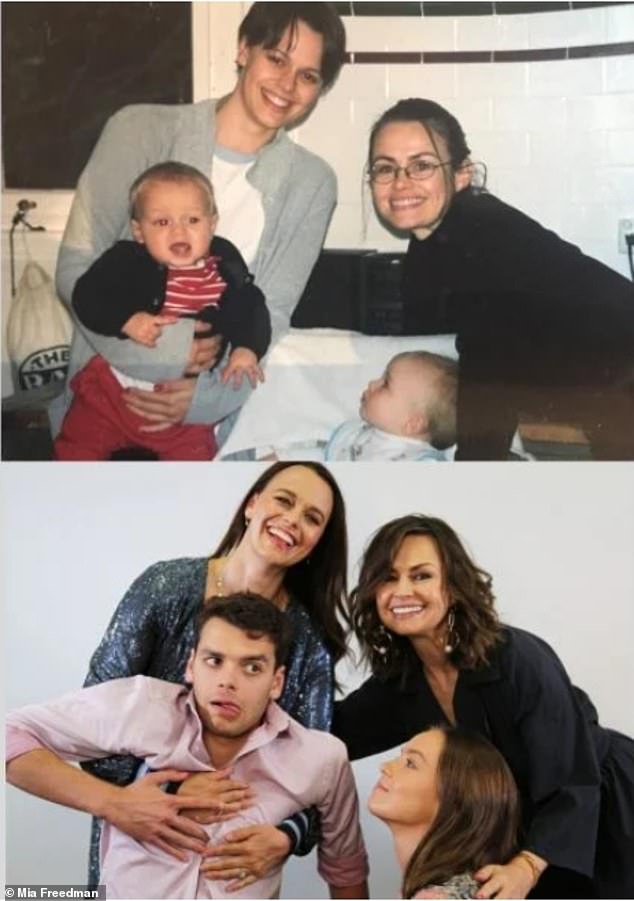 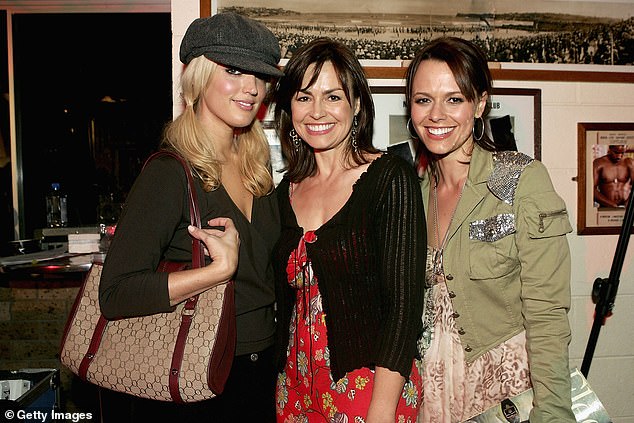 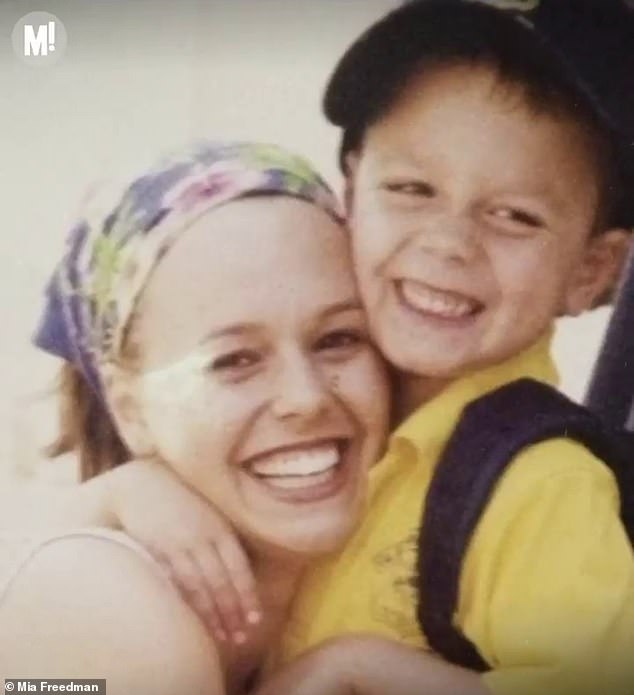 ‘We always shipped Billie and Luca a little bit to be a couple but it was never to be,’ she laughed.

‘They’re very good friends and both work in the industry too, but they’ve never dated.’

By 2007, Freedman launched Mamamia, which enables 150 girls around the world to go to school.

She was told that Mamamia was a ‘little bit niche’ when she first pitched the idea.

While she was fighting to create something unique in the Australian media landscape, she had her children and endured a tragic miscarriage.

Freedman spoke candidly about the difficulties of balancing work and family as a woman and said she relies on Lexapro to get her through daily life.

The drug is also an anti-depressant which helps to balance serotonin levels in the brain but is linked to side effects including mood swings, headaches and a decreased sex drive. 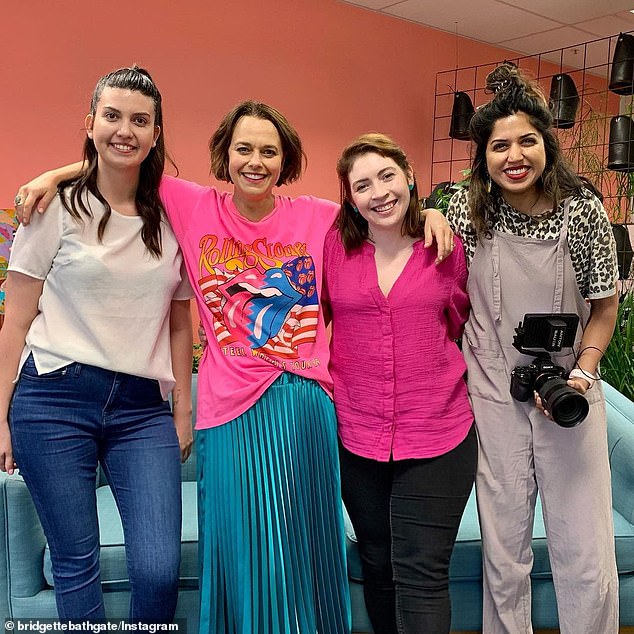 Freedman is the founder, editor and creative director at Mamamia (pictured alongside some of her employees) 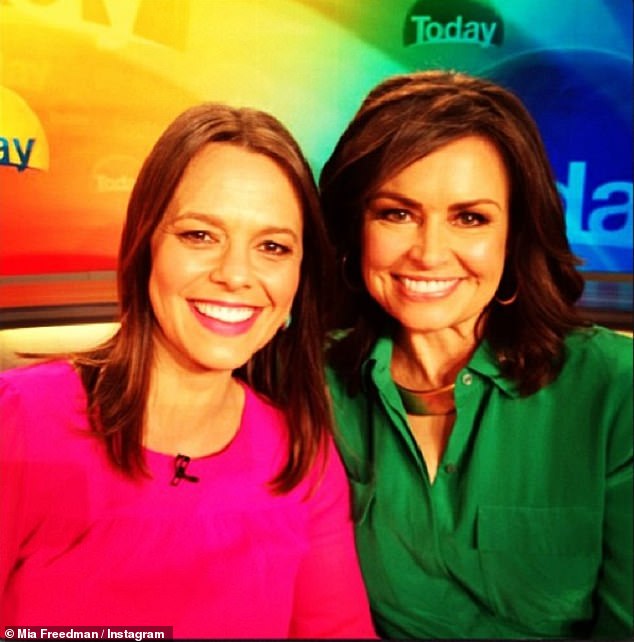 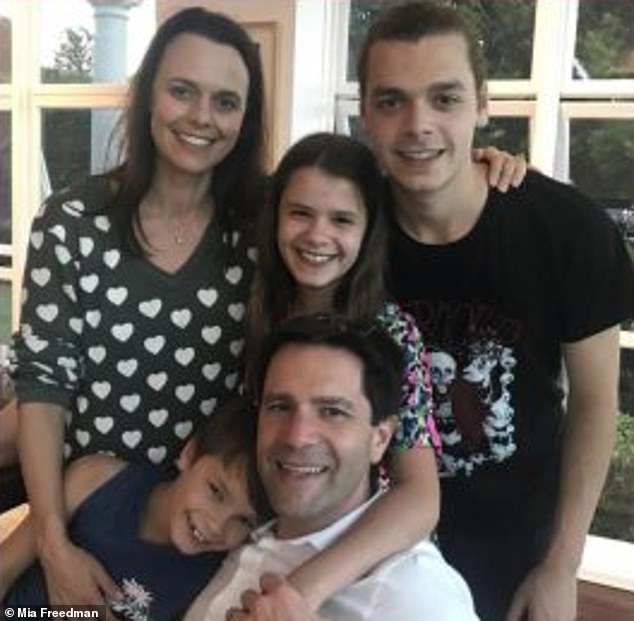 Freedman congratulated the women in the room before sharing her own inspiring story of juggling motherhood, her career and her mental health over the years. Pictured with her three children and husband 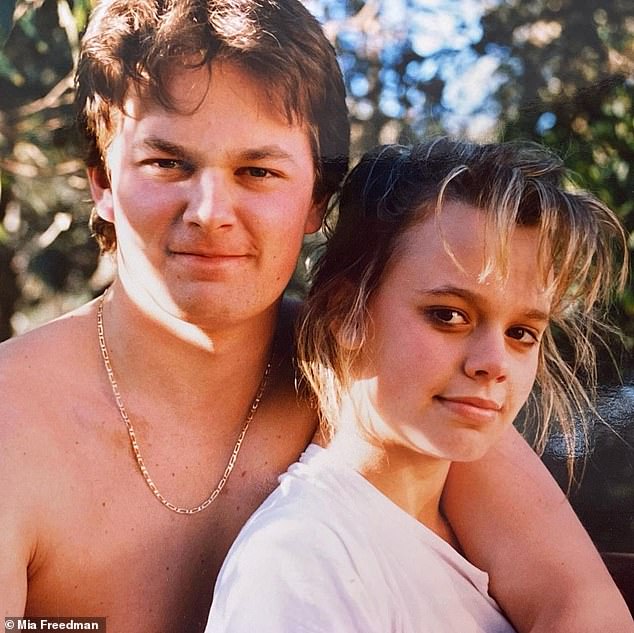 Freedman, pictured with her brother, said her own struggles with body image made her committed to changing how magazines portrayed women

Melbourne-based Freedman first opened up about her anxiety disorder in 2015.

She said years earlier she’d visited a therapist after experiencing abdominal pain, knots in her stomach and an overwhelming sense of ‘frantic dread’ which felt never ending.

The therapist told Freedman what she was experiencing was a nervous breakdown. It lasted 12 days.

Freedman said the diagnosis made her feel at ease, because at least she had answers.

She said regardless of where her job takes her or how chaotic the days are, she makes time to exercise seven days a week because it has given her respite since that initial panic attack.

‘It’s a non-negotiable,’ she said.

‘It’s not a punishment, it’s a sanity-saver.’

During her moving speech, Freedman also touched on her struggles with imposter syndrome – and waged a bet that it was a feeling most women experience at least once in their careers.

Imposter syndrome is characterised as struggling to believe that your own success is deserved or was achieved through personal ability and hard work.

For Freedman, that came as she progressed through the ranks of fashion magazines. 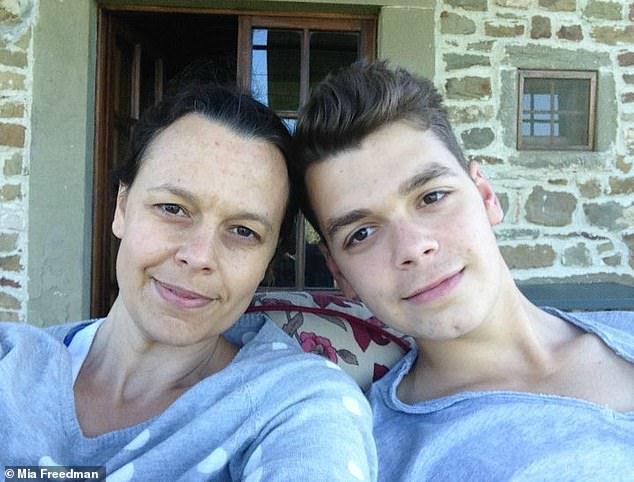 Freedman, pictured with her son, says much of her works is a legacy for her children

Freedman considers much of her work to be a legacy for her children, and is particularly proud of her approach to female empowerment and embracing femininity and women’s bodies at every opportunity she could while working at Cosmpolitan.

When preparing her very first magazine cover, Freedman wanted to feature a woman with a realistic body.

She told her fashion editor at the time to find a woman who was a size 14 or 16.

‘She was horrified,’ Freedman recalled with a shrug.

The woman told her that they’d already fulfilled their quota of women with that body type for the year and that it wouldn’t be necessary, but Freedman persisted. 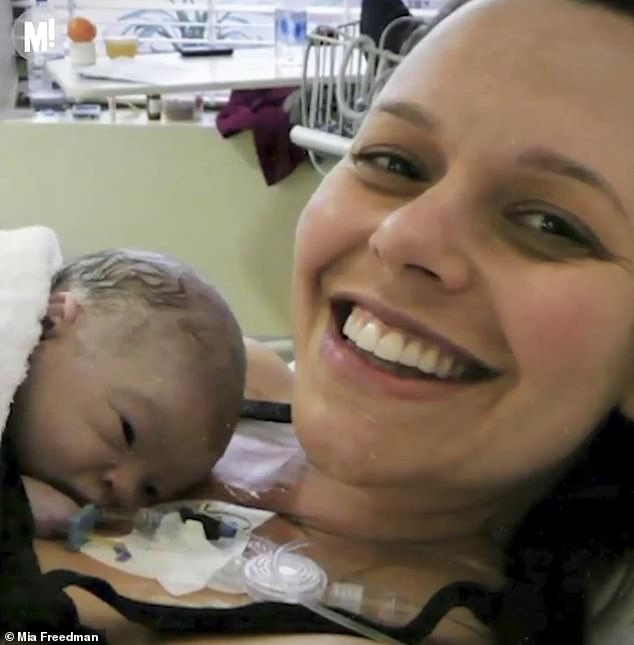 Freedman says she’s learned to love her body, in part by reminding herself that it created three kids 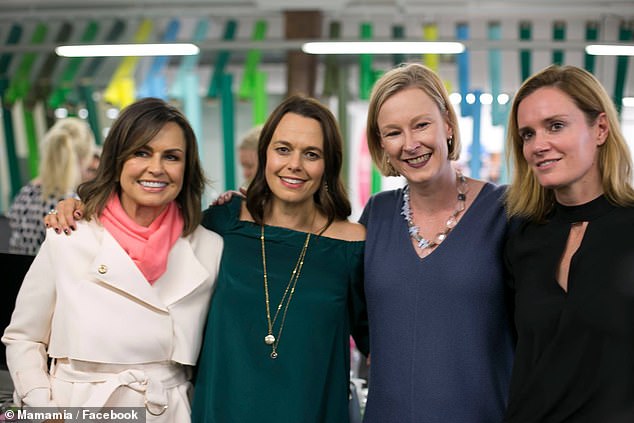 Lexapro is an anti-depressant and anti-anxiety drug prescribed to subdue symptoms of the diseases.

Once a person is prescribed Lexapro, they are urged to take the correct dose and must wean themselves off the medication rather than quit cold turkey.

For more information on the benefits and potential side effects of lexapro, consult a healthcare professional.

She said women with all body types would feature throughout the magazine in the future, and that they would wear high end, extravagant clothing like the rest of the models rather than the ‘cardigans, sensible shoes and slacks’ they were limited to up until that point.

‘Every week, she came into my office and would give me a new excuse as to why she wouldn’t do it,’ Freedman recalled.

‘And then she quit.’

‘I had no friends in the seven years I was in the fashion industry but I didn’t care,’ Freedman said.

Freedman said her own struggles with body image made her committed to changing how magazines portrayed women.

‘Magazines made me feel terrible about myself,’ she said.

‘I didn’t look like anyone in any of them. Why would you want your audience to feel terrible about themselves when they’re consuming your product?’

The decision was a masterstroke, and her detractors eventually quietened when they learned magazine sales were skyrocketing.

Freedman wanted her own children, her daughter in particular, to have positive interactions with female bodies in the media.

‘It’s so rare as women to look at our bodies and feel nothing. I sometimes still feel fat, old, disparaging… But three babies came out of there, I’m healthy and this is just my stomach,’ she said.

Mia Freedman was the keynote speaker at Entourage’s women’s lunch in Melbourne.

The event was celebrating women’s increasing financial independence, highlighted by the company’s evaluation that 65 per cent of clients looking to buy a home were single women in 2020.

‘Women used Covid to their advantage, they took the time to learn and become more financially literate than ever,’ Antoinette Sagaria, a director at the company, explained.

Ms Sagaria and the board at Entourage host celebratory lunches with women in Melbourne every year, but said this year was extra special after enduring such a testing year in Victoria last year.

‘Women are so resourceful. In a crisis like a global pandemic they saved, sought guidance from professionals and secured their financial wellbeing,’ Ms Sagaria said as she introduced Freedman at the event.

Freedman sparkled in a gold glittery pantsuit as she took to the stage.

‘This is my first post Covid event in a year,’ she beamed, before looking around the room to assess the fashion at the event.

Freedman mingled with the 140 other guests at the event throughout the afternoon, which was hosted at the Stokehouse on St Kilda beach.