Mammoths and mastodons were pushed to extinction by climate change, scientists say

Mammoths and mastodons – both ancient relatives of elephants – were driven to extinction by climate change rather than overhunting by humans, new research suggests.

The study challenges claims that early human hunters wiped out the animals and instead blames extreme global environmental change at the end of the last Ice Age for the decline and eventual elimination of the species.

Their extinction risk peaked at around 2.4 million, 160,000 and 75,000 years ago for Africa, Eurasia and the Americas, respectively, the analysis found – timings that do not fit with the expansion of early humans and their enhanced capabilities to hunt mega-herbivores with Stone Age weapons.

However, the University of Bristol study does not totally absolve humans of blame, suggesting that hunting may well have finished off some proboscideans (the order including mammoths and mastodons) around 10,000 years ago.

Unable to adapt: Mammoths and mastodons – both ancient relatives of elephants – were driven to extinction by climate change rather than overhunting by humans, new research led by the University of Bristol suggests. The image above shows our early upright-walking ape ancestors coexisting with proboscideans in East Africa’s Turkana Basin 4 million years ago 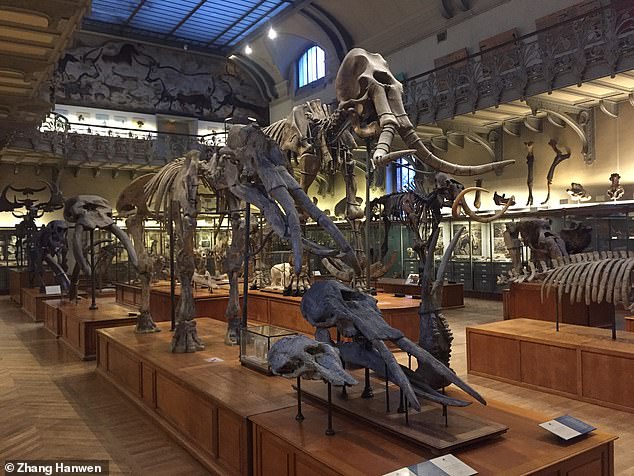 Display: A gallery of extinct proboscideans in the Muséum national d’Histoire naturelle in Paris

WHAT PROBOSCIDEAN SPECIES EXISTED ON EARTH AND WHEN DID THEY GO EXTINCT?

Elephants, as well as their extinct relatives mammoths, mastodons and gomphotheres, are all classed as proboscidean mammals.

The earliest proboscideans date to the late Paleocene Epoch (61 to 54.8 million years ago) in northeastern Africa.

Although there are just three species of elephant alive today, more than 160 extinct proboscidean species have been identified from remains found on most of the world’s continents.

Asian elephants are more closely related to mammoths than African elephants, which diverged from the Asian elephant-mammoth line between 4.2 million and 9 million years ago.

Asian elephants diverged from mammoths between about 2.5 million and 5.6 million years ago.

Meanwhile, mastodons roamed North America until about 10,000 years ago.

Proboscideans were included in the human diet from the Lower Paleolithic period around 1.5 million years ago until the final stages of the Pleistocene about 11,700 years ago.

This coincided with the extinction of proboscideans such as mammoths and mastodons in Europe, America and most parts of Asia.

However, a new study suggests that global climate dynamics drove the decline of mastodons and mammoths rather than humans hunting them.

Researchers led by the University of Bristol found that their extinction risk peaked at around 2.4 million, 160,000 and 75,000 years ago for Africa, Eurasia and the Americas, respectively.

This means they had already long been in decline before they were wiped out around 10,000 years ago.

‘We didn’t foresee this result. It appears as if the broad global pattern of proboscidean extinctions in recent geological history could be reproduced without accounting for impacts of early human diasporas,’ said Dr Zhang Hanwen, study co-author from the University of Bristol.

‘Our data refutes some recent claims regarding the role of archaic humans in wiping out prehistoric elephants, ever since big game hunting became a crucial part of our ancestors’ subsistence strategy around 1.5 million years ago.

‘Although this isn’t to say we conclusively disproved any human involvement.

‘In our scenario, modern humans settled on each landmass after proboscidean extinction risk had already escalated.

‘An ingenious, highly adaptable social predator like our species could be the perfect black swan occurrence to deliver the coup de grâce.’

Big game hunting became an important part of the lifestyle of prehistoric humans around 1.5 million years ago, researchers said, but declines of mammoths and mastodons in Africa had already begun well before that, with their peak extinction risk coming at around 2.4 million years ago.

Research from 2018 suggests modern humans may have reached Eurasia around 185,000 years ago, but not in large enough numbers to fit with the Bristol study’s peak extinction risk for proboscideans of 160,000 years ago on that continent.

Meanwhile, the consensus among archaeologists is that the Clovis people were first to reach the Americas, about 11,500 years ago.

Although elephants today are restricted to just three endangered species in the African and Asian tropics, these are survivors of a once far more diverse and widespread group of giant herbivores, known as the proboscideans, which also include the now extinct mastodons, stegodonts and deinotheres.

Around 700,000 years ago, England was home to three types of elephants – two species of mammoths and the giant straight-tusked elephant.

An international group of palaeontologists from the universities of Alcalá, Bristol and Helsinki, analysed the rise and fall of elephants and their predecessors.

They examined how 185 different species adapted during 60 million years of evolution that began in North Africa.

‘Remarkably for 30 million years, the entire first half of proboscidean evolution, only two of the eight groups evolved,’ said Dr Zhang.

‘Most proboscideans over this time were nondescript herbivores ranging from the size of a pug to that of a boar.

‘A few species got as big as a hippo, yet these lineages were evolutionary dead-ends. They all bore little resemblance to elephants.’

The course of proboscidean evolution changed dramatically some 20 million years ago, the study found, as the Afro-Arabian plate collided into the Eurasian continent.

Arabia provided a crucial migration corridor for the diversifying mastodont-grade species to explore new habitats in Eurasia, and then into North America via the Bering land bridge. 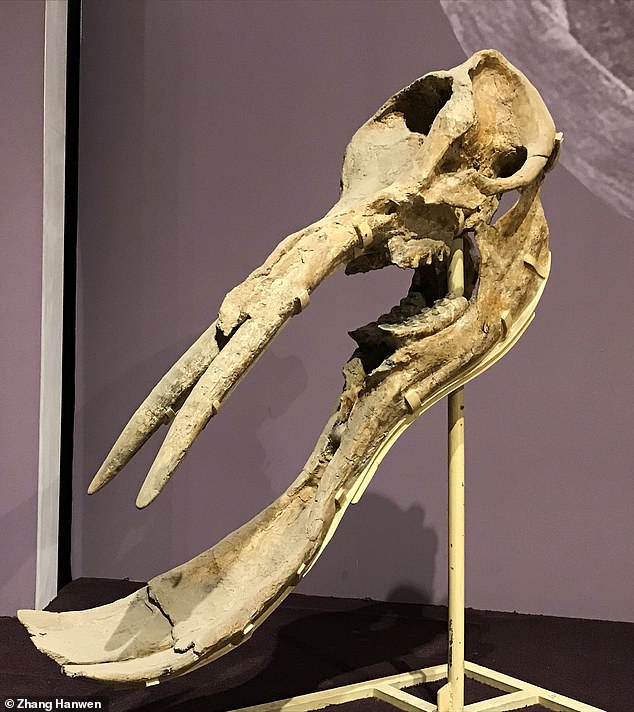 Pictured: A fossil skull of a mid-Miocene ‘shovel-tusker’, which roamed in large herds across Central Asia 13 million years ago. It is on display at China’s Hezheng Paleozoological Museum

The disparity of proboscidean forms through 60 million years of evolution is pictured. A key factor of their evolutionary innovation lies with disparities in tooth morphology as shown 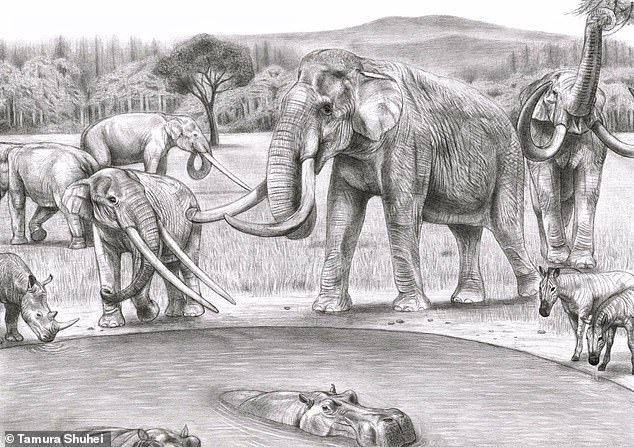 Having a drink: Primitive southern mammoths (right) are seen sharing their watering hole with the mastodont-grade Anancus arvernensis (left), the last of its kind. Rhinos, hippos and zebra-like wild horses are also seen in the depiction from northern Italy 2 million years ago

WHAT WAS BRITAIN LIKE DURING THE LAST ICE AGE?

The last Glacial Maximum was around 22,000 years ago when much of Europe was covered in ice.

During the ice age, which ended about 11,500 years ago, ice covered about 30 per cent of the land in the world.

In Britain, glacial ice and waterflows spread as far south as the Bristol Channel.

Average temperatures were 5°C (8°F) colder than they are today, allowing a one-kilometre-thick sheet of ice to cover much of the country.

The temperature remained below 0°C all year round in northern regions, particularly Scotland, allowing the sheet to remain on the land all year.

Ice connected Britain with Scandinavia, allowing a host of large wildlife to roam free between the UK and mainland Europe.

During this period Britain would have seen the likes of woolly mammoths, giant deer and wolves roaming its icy planes.

Large glacial lakes covered Manchester, Doncaster, Newcastle and Peterborough and much of the country was uninhabitable for humans.

Corridors of fast flowing ice, known as ice streams, flowed toward the east over Edinburgh and toward the west of Glasgow.

All of Ireland was covered in ice, which was flowing through the Irish sea where it met Welsh ice and then flowed south toward the Isles of Scilly.

Much of Scotland, Wales, the midlands and northern England was covered in perpetual ice.

Cambridge, which was covered by a huge glacial lake, was the most southern region to be heavily affected by the icy climate.

Over time the ice and its hefty waterflows carved out the land of Britain, forming geological scars that can still be seen today.

These include glacial ridges sculpted by moving ice and winding flows of rock that travelled for miles across the country.

‘The immediate impact of proboscidean dispersals beyond Africa was quantified for the very first time in our study,’ said lead author Dr Juan Cantalapiedra, from the University of Alcalá in Spain.

‘Those archaic North African species were slow-evolving with little diversification, yet we calculated that once out of Africa proboscideans evolved 25 times faster, giving rise to a myriad of disparate forms, whose specialisations permitted niche partition between several proboscidean species in the same habitats.

‘One case in point being the massive, flattened lower tusks of the “shovel-tuskers”. Such coexistence of giant herbivores was unlike anything in today’s ecosystems.’

During this boom period of proboscidean evolution, the name of the game was to ‘adapt or die’, Dr Zhang said.

‘Habitat perturbations were relentless, pertained to the ever-changing global climate, continuously promoting new adaptive solutions while proboscideans that didn’t keep up were literally, left for dead.

‘The once greatly diverse and widespread mastodons were eventually reduced to less than a handful of species in the Americas, including the familiar Ice Age American mastodon.’

By three million years ago the elephants and stegodons of Africa and eastern Asia seemingly emerged victorious in this evolutionary boom.

However, environmental disruption connected to the coming Ice Ages hit them hard, with surviving species forced to adapt to the new, more austere habitats.

The most extreme example was the woolly mammoth, with thick, shaggy hair and big tusks for retrieving vegetation covered under thick snow.

The earliest proboscideans date to the late Paleocene Epoch (61 to 54.8 million years ago) in northeastern Africa.

Although there are just three species of elephant alive today, more than 160 extinct proboscidean species have been identified from remains found on most of the world’s continents.

Asian elephants are more closely related to mammoths than African elephants, which diverged from the Asian elephant-mammoth line between 4.2 million and 9 million years ago.

Asian elephants diverged from mammoths between about 2.5 million and 5.6 million years ago.

Proboscideans were included in the human diet from the Lower Paleolithic period around 1.5 million years ago until the final stages of the Pleistocene about 11,700 years ago.

This coincided with the extinction of proboscideans such as mammoths and mastodons in Europe, America and most parts of Asia.

However, this new study suggests that proboscideans had already long been in decline prior to their hunting by humans.

The study is published in the journal Nature Ecology & Evolution.

WOOLLY MAMMOTHS EXPLAINED: THESE GIANT MAMMALS ROAMED THE EARTH DURING THE PLEISTOCENE 10,000 YEARS AGO

The woolly mammoth roamed the icy tundra of Europe and North America for 140,000 years, disappearing at the end of the Pleistocene period, 10,000 years ago.

Males were around 12 feet (3.5m) tall, while the females were slightly smaller.

They get their name from the Russian ‘mammut’, or earth mole, as it was believed the animals lived underground and died on contact with light – explaining why they were always found dead and half-buried.