Man, 20, dies of suspected drug overdose after at least 6,000 hit raves in Leeds and Manchester

A 20-year-old man has died of a suspected drug overdose and three others were stabbed, as thousands attended two raves in Manchester on Saturday night.

An 18-year-old woman was raped after at least 6,000 people went to three ‘quarantine’ raves in Leeds and Manchester.

The 20-year-old had attended a gathering of around 4,000 in Droylsden, according to Greater Manchester Police.

Nearby in Carrington there were reports of three separate stabbings at another 2,000-strong party, including one which left an 18-year-old man with life-threatening injuries.

A 20-year-old man has died of a suspected drug overdose and three others were stabbed, as thousands attended two raves in Manchester

They added that officers were met with violence from revellers at the party, with items thrown and a police car being vandalised.

There were no further reported incidents of crime at the Droylsden rave.

Greater Manchester Police Assistant Chief Constable Chris Sykes said: ‘These raves were illegal and I condemn them taking place – they were clearly a breach of coronavirus legislation and guidelines, and have had tragic consequences.

‘Coronavirus is still a threat and we will continue to engage with people to encourage them to take some personal responsibility and do the right thing.

‘Ultimately we need the people of Greater Manchester to join together and demonstrate the spirit that they have previously shown in the face of hard times.’

Mr Sykes added that violence towards police at the Carrington rave was ‘absolutely not acceptable and will not be tolerated’.

He added: ‘Our officers are working incredibly hard to keep people safe and should never be met with inexcusable violence whilst carrying out their duties.’

Deputy Labour Leader and MP for Ashton-under-Lyne Angela Rayner tweeted: ‘Those who attended put themselves and their loved ones at risk. (Completely) irresponsible.

‘A lot of effort went into online events this weekend across (Greater Manchester). Those who attended should be ashamed of themselves. My local area now has to deal with the aftermath.’

It is claimed thousands of people attended the event, while up to 50 emergency service vehicles are said to have arrived as part of the police effort to break it up.

One witness said it looked like ‘a nightclub at kicking out time’. 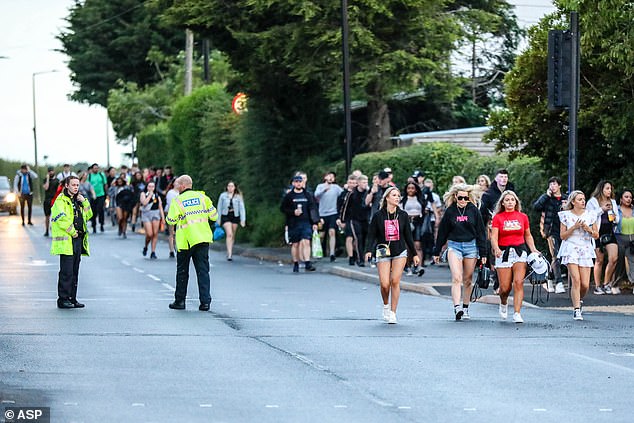 An illegal rave which is said to have attracted thousands of people was last night shut down by police after unconfirmed reports of a stabbing. Pictured: Police shut down the event in the Carrington area of Greater Manchester last night. 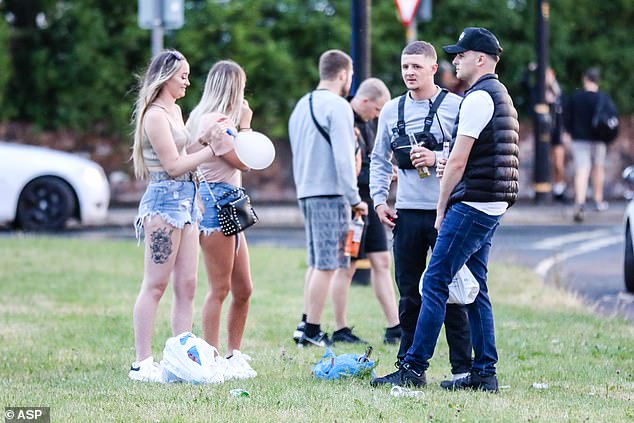 It is claimed thousands of people attended the rave. Pictured: People were seen drinking in the street near to the event 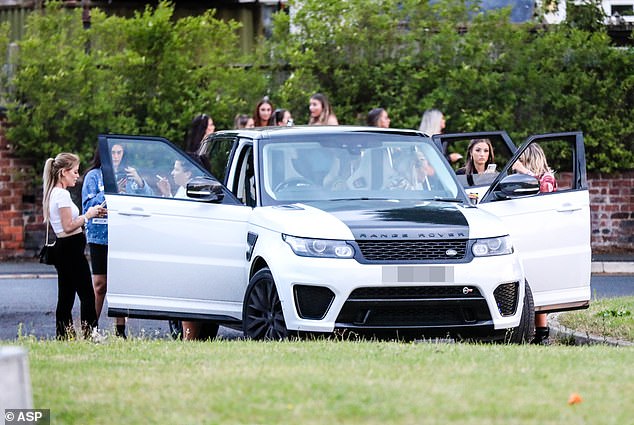 Up to 50 emergency service vehicles are said to have arrived as part of the police effort to break it up. Pictured: People gather round a car near to the rave 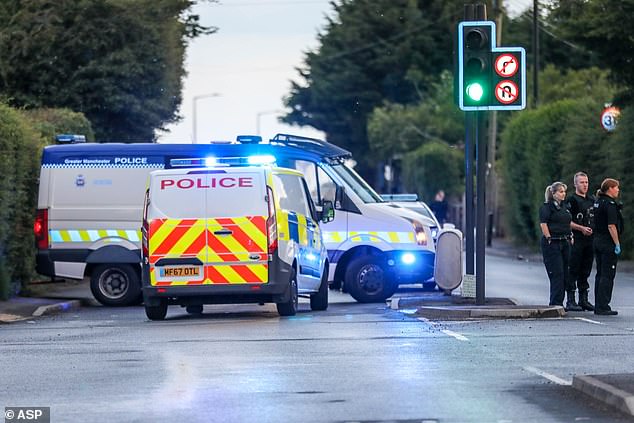 According to reports in local newspaper, the Manchester Evening News, a large number of Greater Manchester Police vehicles were called to Mile Road in Flixton at around 9.30pm yesterday.

The paper reports that the rave took place near to a water treatment centre in front of a paper mill.

Such gatherings are illegal under the Criminal Justice and Public Order Act, which was introduced in 1997.

Large gatherings are also likely to breach strict social distancing guidelines, introduced in March as part of the government’s coronavirus lockdown, in a bid to stop the spread of Covid-19.

Though small outdoor gatherings in gardens have now been given the green light, people are still required to maintain social distancing, and remain at a two metre distance, with those not in their household.