Jenny Yoksha, 24, waived her anonymity to reveal her ordeal at the hands of a paedophile

A furious grooming victim who was duped into having sex with a man when she was aged just 13 has spoken of her disgust after he was given a suspended jail sentence.

Bravely waiving her right to anonymity, Jenny Yoksha, 24, told how pervert Michael Thornton tricked her into losing her virginity and had sex a second time with her while she was wearing her school uniform.

Thornton who was aged 22 at the time managed to talk her into bed at his home in 2009 after pretending to be a 16-year-old boy and striking up a friendship with her on Facebook.

Jenny had no idea of his true age until last year when she searched his name on Google and found a court report from 2011 about his conviction for having sex with two other under age schoolgirls.

It prompted her to make an official complaint to police about how he had sex with her ten years previously when she was aged 13 just before he targeted the other girls Thornton was arrested and charged with two historic offences of having sexual activity with her when she was a child.

He initially denied any wrong doing, but changed his plea to guilty at Manchester’s Minshull Street Crown Court on June 29 this year and was sentenced to six months imprisonment suspended for 18 months. 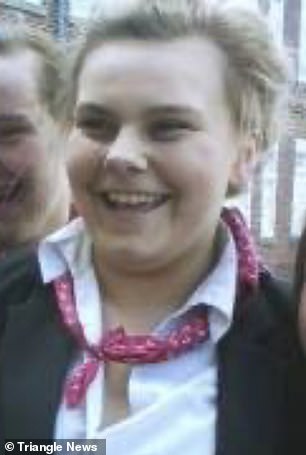 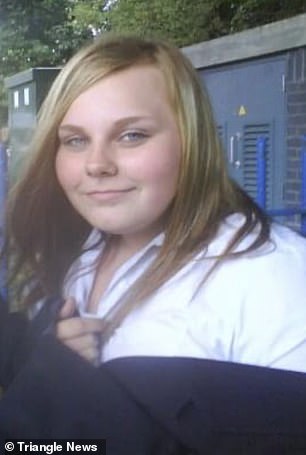 Jenny (pictured right and left as a schoolgirl), was tricked into losing her virginity when she was 13 to a 22-year-old firefighter who pretended to her that he was 16 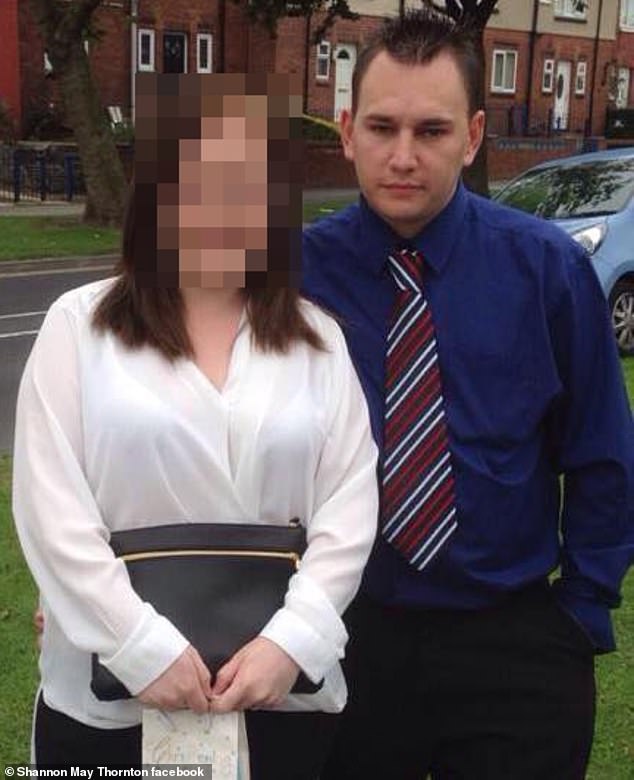 Michael Thornton, from Wakefield, West Yorkshire, is now a 32-year-old married father-of-three. Hew was spared jail for grooming Jenny by a judge because he’d turned his life around

Jenny of Old Trafford, Manchester, has been left fuming about what she considers to be his light sentence even though he will also be on the sex offenders register for seven years.

She said: ‘It’s a joke. He should have gone to jail. He’s a paedophile. He groomed me online at 13. He targeted me with the intention of taking my virginity.

‘He lied about his age. I would never have even spoken to him if I’d have known he was 22 let alone have sex with him. He’s done this to two other girls and I feel that I could have prevented that if I’d known the truth.

‘He’s got away with this. I couldn’t stop crying for a couple of days after I heard his sentence – it’s pathetic. He hasn’t been punished. Three times isn’t a mistake. It’s a pattern of behaviour that makes him a paedophile. He pursued me as a child, he knew my age and what he did was disgusting. 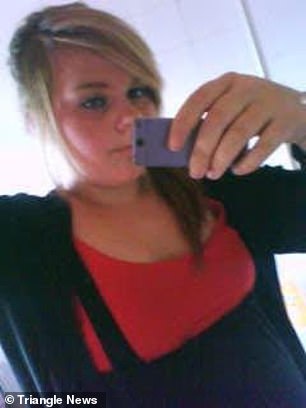 ‘I can’t stop thinking about it now and feel so vulnerable knowing that I’d been deceived by a pervert. It’s made me a bundle of nerves. That guy stole my innocence and he should be punished for that. This is a joke not justice.’

Jenny revealed in an exclusive interview with MailOnline how she first heard from Thornton when he sent her a message on Facebook in October 2009.

She said: ‘I didn’t know him but we had a few mutual friends so I thought he must have found me through them.

‘I was listening to music on my computer when a message flashed up saying: ‘You’re beautiful.’

‘I was flattered as he looked nice in his profile pic with spiky brown hair. I answered him saying, ‘Thanks’, and straight away he asked me how old I was.

‘I told him I was 13 and he said he was 16 and we worked out we didn’t live far from each other in Manchester.

‘He was flirting and I was flattered by the attention but pretty quickly the talk turned to sex.

He asked me if I was a virgin and I told him I was – I’d never even kissed a boy.

‘He messaged me all the time and I loved the attention. He made me feel special. It made me feel grown up although I was incredibly young and naive.

‘He sent me a photo of an engagement ring, told me he loved me and then he invited me round to his house and eventually I agreed. I was smitten.

‘I told my parents I was going to see friends but I caught the bus to his house. He met me at the back door and took me through the kitchen to his bedroom. It was plain and I remember thinking how different it was to mine, which had stuff everywhere. 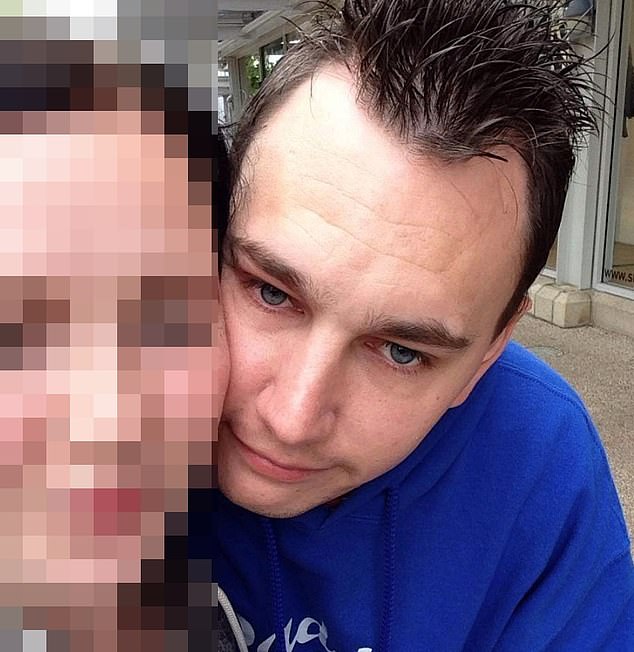 Thornton was a trainee fireman when he groomed Jenny in 2009. He was caught out when she searched his name on Google ten years later and realised he must have been 22 at the time

‘Mikee was shorter than I thought he’d be, but he looked young and just like in his picture. I sat on the bed and he kissed me. Then he was pulling at my clothes and we had sex.

‘It hurt and he didn’t use any protection. Afterwards we chatted for a while and then he said, ‘I’ll walk you to the bus stop.’ I was bleeding and didn’t tell anyone about it.’

Thornton later asked her to visit him again on her way to her all-girls’ school.

She said: ‘I told my mum I was going in early to do some extra work. Mikee lived on the way so I popped in.

‘I was wearing my full school uniform which was a black blazer and skirt, white shirt, red tie, white socks and black shoes. He told me to keep it on and just take off my knickers.

‘I thought that was because it was easier, but now I realise he wanted me to keep it on. We didn’t use anything again, but I didn’t worry about getting pregnant.

‘I thought I was in love with him and trusted him. But I didn’t hear from him much after that and then I was with one of my friends when he sent her a message on Facebook asking her out. 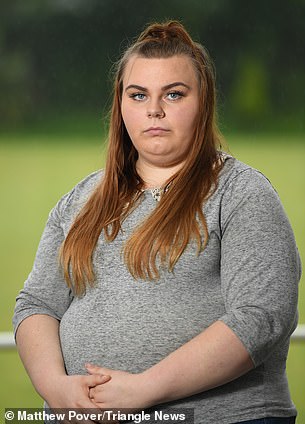 ‘I dumped him and he didn’t seem that bothered although he asked me six months later if I had told the police about us. I didn’t know what he was talking about and said of course I hadn’t. It should have rung alarm bells but I was just a kid thinking I was talking to a 16-year-old boy.

‘I looked him up on Facebook after a while and it said he was a fireman but I didn’t contact him. I thought he was a bit of a player.’

Jenny didn’t think about Thornton after that until she was talking at work with close colleagues one day last February and they discussed losing their virginity.

She said: ‘I told them my story and they were all shocked that I was so young as I’m so quiet and reserved.’

Jenny said the conversation prompted her to look up Thornton once again on social media, but she couldn’t find him.

She added: ‘I then googled him and a story came up about him appearing in court for having sex with two girls under the age of 16.

‘He looked the same but the story said his real age and I realised he was 22 and not 16 when he’d had sex with me.’

The story revealed that Thornton had been given a three year community order at Manchester Crown Court in 2011 for having sex with the other two girls.

Jenny who went to the police with the support of her current boyfriend Chris Mead, said: ‘I felt sick. He was now a married man with children and I realised the previous ten years of my life had all been a lie.

‘I hadn’t lost my virginity to a silly teenage boy – I had been groomed online by a pervert who targeted me because I was so innocent. I was really upset and went to the police.’ 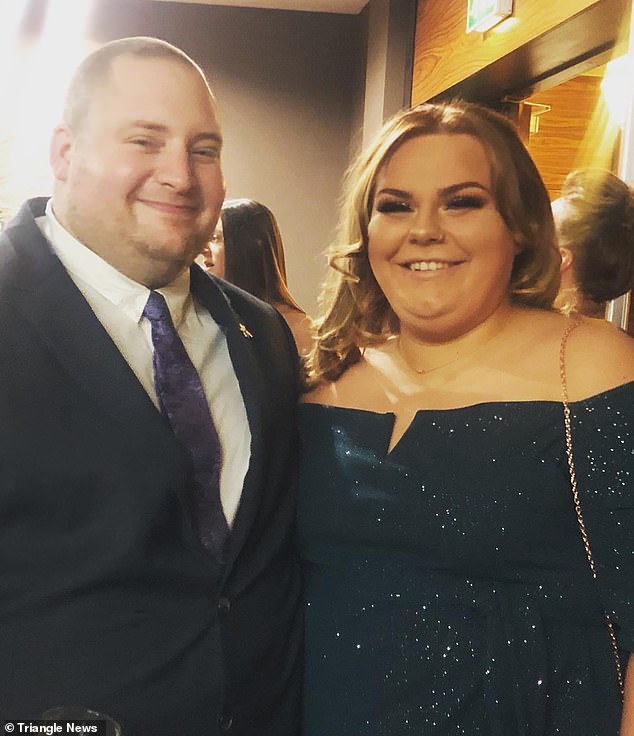 Jenny (pictured) says she trusted Thornton but it had all been a lie. She has put what happened behind her and has now found happiness with her new partner Chris Mead (left)

Thornton was a married father-of-three living in Wakefield, West Yorkshire, by the time he was prosecuted for sexual activity with Jenny when she was aged 13.

Jenny said: ‘I thought I’d just had a bad first relationship with a 16-year-old boy. But in reality, I’d been targeted by a paedophile who went on to groom two other girls.

‘I thought he was 16, but he was 22 when he took my virginity and is now a 32-year-old married man with three children. It makes me sick to think how he targeted me and the others.

‘I told him I was 13 and a virgin because I trusted him. I thought I was talking to Mikee, a teenage boy who I fell in love with. But it was a lie and I had no idea. If I had known his true age I would never have spoken to him and certainly wouldn’t have become involved with him.

‘I feel so guilty because I was the first girl he groomed and if I had realised I would have gone to the police and the other two girls would have been safe. I blame myself for what he did to them even though there was no way of knowing. He’s sick.’

Jenny decided she had to tell her story after a he was spared jail for his crimes.

Judge Mark Savill said he wouldn’t send Thornton to prison because he had turned his life around and he was ‘fully satisfied’ the paedophile would ‘continue to live a decent, law-abiding life’.

But Jenny hit out at the sentence saying: ‘He’s been allowed to live out his schoolgirl fantasy’.