Man, 23, clinging to front of Perth train is arrested

A man spotted clinging to the back of a speeding train in Perth will likely be charged with trespassing.

The 23-year-old train surfer got onto the coach at Leederville and was filmed by members of the public on the Mitchell Freeway on Saturday afternoon.

When the train arrived at Glendalough station, which is the next stop on that line, he was photographed moving back inside the carriage.

When the train arrived at its next stop at Stirling, he was arrested by waiting police.

‘He was clinging on to a windscreen wiper — were he to fall it’s a very unfriendly and unreceptive surface with ballast and rail and concrete sleepers, he would have almost certainly been killed, if not badly injured,’ Public Transport Authority spokesman David Hynes told the ABC.

A police spokesman said the man was taken to Sir Charles Gairdner Hospital for a mental health assessment. 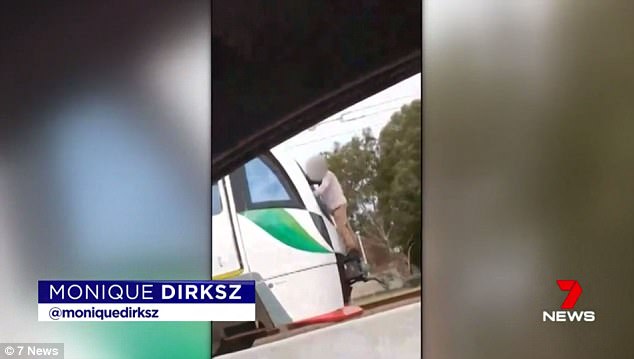 The man will face a trespassing charge under the PTA Act.

This is the first time the PTA have ever caught someone train surfing in the moment. Most other times a video of the incident will be uploaded to Youtube sometime later.

Mr Hynes admitted that while there isn’t a clear-cut piece of legislation against the act he would consider adding it.