Man, 23, dies after being mauled by a shark while swimming off the Great Barrier Reef

Man, 23, dies after being mauled by a shark while swimming with a group of friends off the Great Barrier Reef

A swimmer has died after being mauled by a shark while swimming with a group of friends off the Great Barrier Reef.

The Queensland Parks and Wildlife ranger, 23, was attacked off North West Island in the reef’s south just after 5pm on Monday.

He had been working on the island in a team of four rangers and was attacked by the shark while they went for a swim off the back of their boat to cool down.

Gladstone Police senior sergeant Tony Anderson said the ranger was swimming back to the boat when he was bitten and suffered ‘substantial injuries’.

He was flown to Gladstone Hospital in a critical condition but died from his injuries about 10pm.

‘At the end of the day there was four people swimming of the back of the boat cooling down after a day’s work,’ sergeant Anderson said.

‘This male person was the last person to get out of the water. As he was about to get on the boat he was attacked by a shark.’

Premier Annastacia Palaszczuk described the death as a ‘tragic’ loss of life.

‘Once again a family is out there, is grieving for a young man who tragically has lost his life in a horrific shark attack,’ she said.

‘A lot of his work colleagues I understand are very upset today.’

A rescue helicopter with critical care paramedics had been dispatched from Rockhampton after the attack. 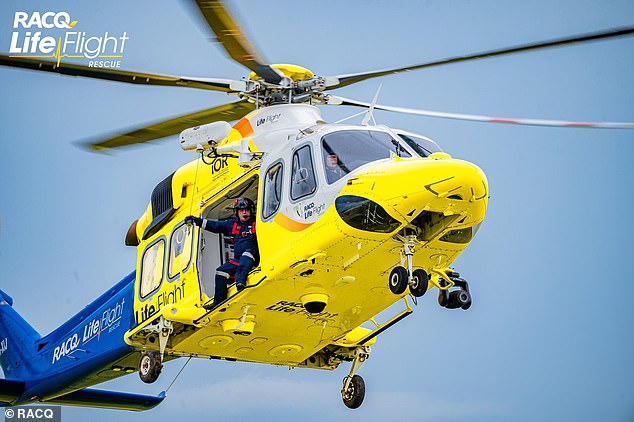 A paramedic was dropped to the beach and taken to the victim on a boat, before both were winched back to the helicopter.

The incident is the third shark attack in the area in just over three months.