Man, 23, jailed for nine years after raping his girlfriend in her sleep and taping it

‘She was a blow up sex doll you used for your own pleasure’: Man, 23, is jailed for nine years for raping his girlfriend repeatedly as she slept and taping it

A man who repeatedly raped his girlfriend while he slept and taped the horrific acts has been sentenced to nine years jail.

The court heard his girlfriend had been raped several times over the course of nearly a year up to July 2016, The West reported.

She had only discovered she had been assaulted after accidentally plugging in his external hard drive into her computer.

A woman discovered her boyfriend, 23, had been raping her in her sleep and filming it after accidentally plugging his external hard drive into a computer (stock image)

The woman saw footage of herself being abused by her partner and sometimes with objects. The clips showed eight assaults over 10 months and ‘invasive, repetitive, obsessive penetration’.

In handing down her sentence, Judge Troy Sweeney said the horrific assaults would leave the woman, who had been living with Morrison, with lasting trauma.

‘Women know that violent strangers are the enemy and to be avoided,’ Judge Sweeney said.

‘A woman can try and watch out for that sort of man but for (this woman) sleep is now the enemy.

‘And she also knows that the man she loved and trusted and chose to live with is the enemy.’ 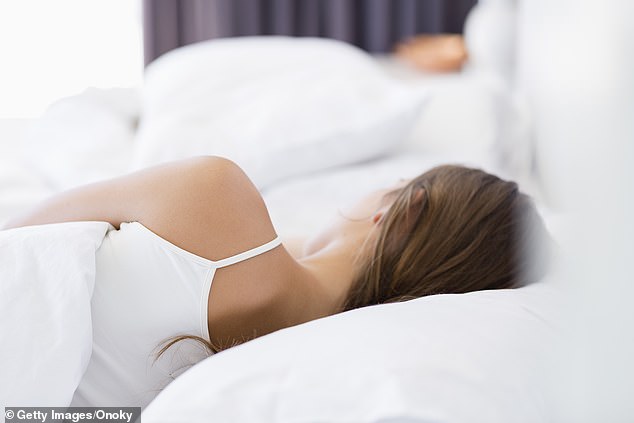 Judge Sweeney said Morrison treated the woman like a ‘blow up plastic sex doll… which you used… for your own pleasure’.

While prosecutors had alleged the woman was drugged before Morrison’s assaults, Judge Sweeney said there was not enough evidence.

Morrison will be eligible for parole in 2025.