Man, 23, who tried to drown himself in a Virginia swimming pool SUES police rescuers for $100K

A man who tried to drown himself in a swimming pool has sued the lifeguard and police who rescued him for the $100,000 in medical bills he incurred after being pulled from the water.

Mateusz Fijalkowski, 23, was in the grip of a bipolar episode when tried to drown himself in the Virginia pool where he worked.

After his heart and breathing stopped the Polish national was pulled out and given CPR by police and a lifeguard.

Fijalkowski survived and has returned to Poland – but is suing the men that saved his life over the medical fees incurred after his rescue.

‘The police allowed me to sink before their eyes,’ Fijalkowski told the Washington Post.

‘I’m glad that in the end they realized that they shouldn’t let me drown, but I don’t thank them for letting me die, clinically, before their eyes.’

Fijalkowski, who speaks little English, moved to the US from Poland on an international summer job program and was given work at a pool, despite the fact he could not swim.

He began work at the Riverside Apartments in Fairfax County on May 26 where his roles included cleaning, arranging deck chairs and checking the water’s pH level.

On his third day he began to act strangely. He argued with guests and muttered to himself in Polish.

After he ripped off an girl’s wristband and told her she was not allowed to swim another lifeguard called the police.

Police arrived but his episode continued.

Fijalkowski continued to blow his whistle, shouting ‘I am the lifeguard!’ while praying in Polish.

He threw his cellphone into the shallow end of the pool before retrieving it and throwing it in again.

Concerned, police contacted a Polish-speaking officer and Fijalkowski’s roommate but he ignored both of them.

Then he entered the water for the third time and continued forwards until he was completely submerged.

Eight officers watched as he disappeared into the eight-foot-deep pool.

Shocking footage taken by a bystander through the fence shows his head under the surface. 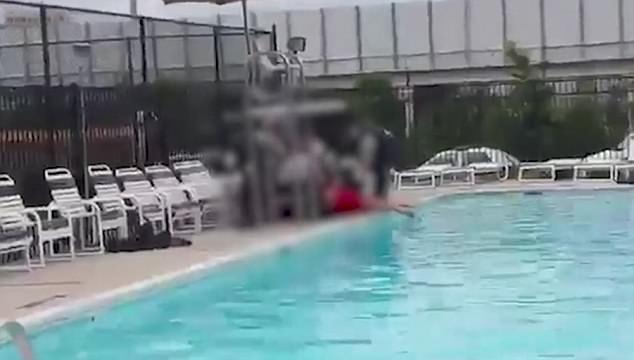 Police said they did not approach until Fijalkowski had stopped moving as the man has been acting violently and erratically. Pictured: Officers and a lifeguard perform CRP on the man

Fijalkowski is understood to have grabbed tightly on to vents at the bottom of the pool, holding himself there for two-and-a-half minutes.

When his limp body began to float to the surface Sean Brooks, Fijalkowski’s supervisor lifeguard, jumped in, dragging him to the side.

Fijalkowski had vomited in the pool, his heart had stopped and he was no longer breathing.

Officers would not let Brooks jump in until Fijalkowski had stopped moving, documents show.

Police later confirmed they entered the pool the moment they realized Fijalkowski had become still. 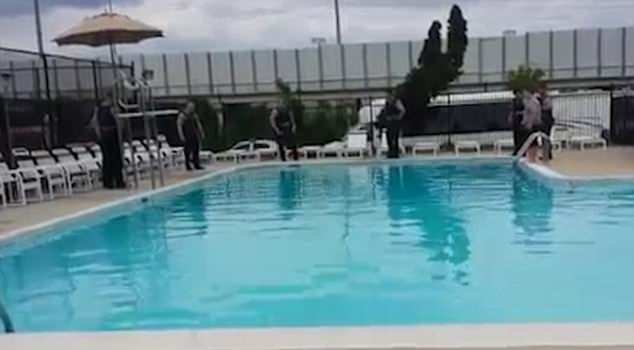 Fijalkowski was taken to Fairfax Inova’s Heart and Vascular Institute and was released on June 8, his attorney said.

He was then held in a psychiatric unit for six days, where he was diagnosed with bipolar disorder.

He had never before experienced a mental health episode. Fijalkowski returned to Poland and is went onto medication. The young man has not had an episode since.

Now he has filed a lawsuit in the Eastern District of Virginia.

‘They saved his life. He did not die,’ Fairfax County Police Chief Edwin C. Roessler Jr. said in an interview.

‘You’re going to sue someone for saving your life?’

Roessler said his officers were right to avoid getting too close to the man – who had been acting violently.

‘When someone’s having a mental episode, the last thing you want to do is go hands on,’ Roessler said.

‘You use time on your side to let the episode subside.’