A mother has recalled the horrifying moment she was dragged screaming across a campsite after a man allegedly ploughed his ute into her young family as they slept in their tent.

Monique Turner, 27, and Sean Miller, 32, celebrated the new year on Friday with their children Jhett, 10, Elijah, five, and Lahlita, three, and her elderly parents at Kentish Park campsite in Tasmania’s north.

After watching the midnight fireworks, the family went to bed about 12.30am – an hour and a half before they were woken to blood-curdling screams as a vehicle struck their tent.

The mother-of-four told Daily Mail Australia that Mr Miller managed to stand up as the tent was dragged through the dirt, but was eventually tossed out of a gaping hole in the canvas – leaving her alone and terrified inside.

‘I was stuck in the tent screaming at my dad for help not knowing where my babies were,’ she said.

Pictured, Monique Tuner and Sean Miller with their children Lahlita, three, (on her father’s lap), Jhett, 10, (far right) and Elijah, five, (far left). Abel, seven, is Ms Turners son from a previous relationship and sits next to Mr Miller 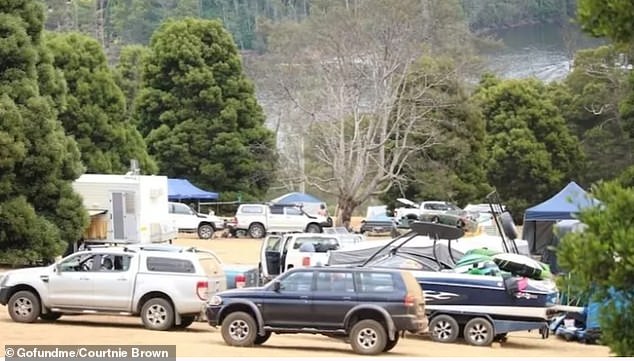 Pictured: The campsite where Monique Turner, Sean Miller and their children were sleeping when a man allegedly ploughed into their tent

‘When I finally got out of the tent I saw my 10-year-old laying face down on the ground and my three-year-old in my mother’s arms with blood all over her top of her head.’

Five-year-old Elijah was sitting with his grandmother with a headache and ‘in complete shock’.

Onlookers raced to the family and offered help, while about four people called police and ambulances.

Ten-year-old Jhett suffered the worst injuries with a ruptured spleen, fractured ankle and pelvis, bruises all over his face, and friction burns.

He was in agony – vomiting, screaming and crying when paramedics eventually arrived and tried to assess his damaged body.

The family were taken to the Northwest Regional Hospital where doctors used skin glue to plug the cut on the back of three-year-old Lahlita’s head before she and her brother Elijah were discharged. 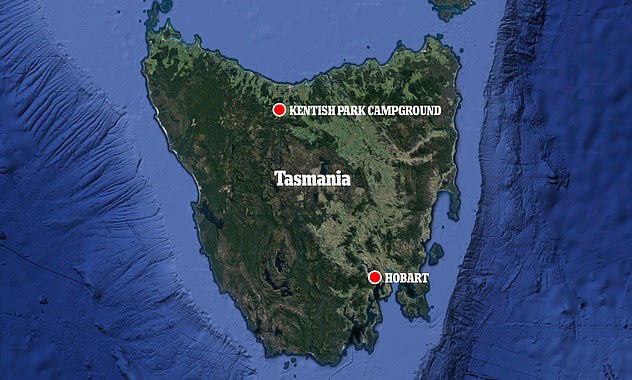 A 27 year old man has been arrested in connection with the terrifying incident at remote Kentish Park campsite, 40km south of Devonport and 280km north-west of Hobart 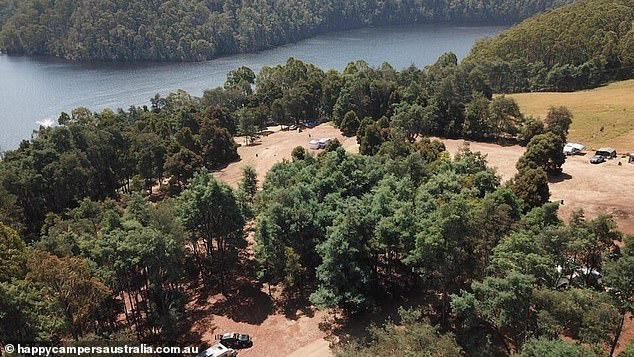 Jhett was flown to Royal Hobart Hospital while the rest of his shell-shocked family made the four-hour trip by car.

When Ms Turner and Mr Miller realised they didn’t have funds to pay for accommodation in the state’s capital, generous family members stepped in covered the costs.

Ms Turner’s cousin Courtnie Brown set up a GoFundMe to help pay for a hotel room, food and parking while Jhett recovers in the children’s ward.

‘They have no money or savings to stay anywhere,’ Ms Brownwrote on the fundraiser.

‘If you are able to assist even with a modest donation it would be greatly appreciated by the family.’

Jhett does not need surgery at this stage, but Ms Turner said he is still in a lot of pain. 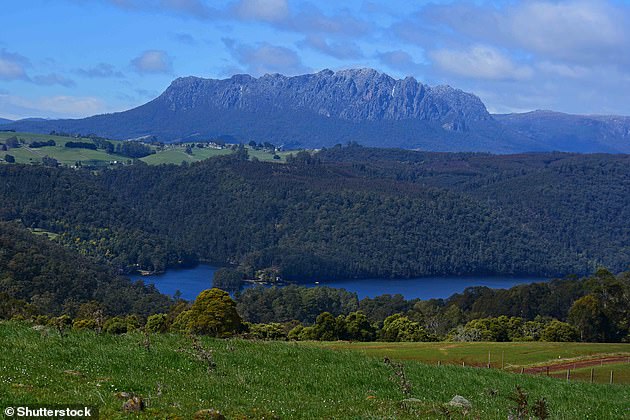 The mum-of-four thanked police and paramedics for sitting patiently with her son and holding his hand as he shrieked in pain on the way to the hospital.

‘I’m also incredibly thankful that my parents pulled my babies out of the tent,’ she added.

A 27-year-old man who was allegedly causing trouble in the hours leading up to the incident at the campsite on the banks of Lake Barrington, 40km south of Devonport, is in police custody.

No charges have been laid and investigations are still underway.

Acting Sergeant Fabienne Jamieson said police were told the man was ‘exhibiting anti-social behaviour prior to the crash’.

He then allegedly got in his car and charged through the campsite, running over the family’s tent as they slept inside before smashing his vehicle into a tree.

‘Police will allege that the male crashed his vehicle through a tent which contained two adults and three children sleeping inside,’ Tasmania Police said in a statement.

‘The male then narrowly missed other camping sites and people in the area prior to colliding with a tree.’ 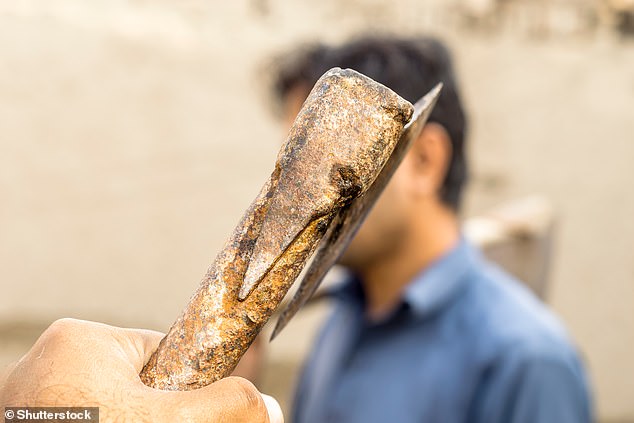 The furious vigilante hit squad armed with axes, like the one pictured here, had to be pulled off the man to save his life, before he was pinned down and held captive until police arrived

Moments after the alleged collision, an angry lynch mob of campers grabbed axes and shovels and dragged the driver from his ute.

The furious vigilante hit squad had to be pulled off the man to save his life, before he was pinned down and held captive until police arrived at the scene.

‘The lynch mob wanted to make him pay,’ said one camper told the ABC.

‘We’ve removed him from his car so he couldn’t drive any further.

‘A couple of guys restrained him, put his hands behind his back and there was a karate guy who got him.’

The camper said the tragedy could have been worse, adding that more people could’ve been struck had the car gone inches in either direction.

Pictures from the scene showed the collapsed scaffold skeleton of a tent and a battered food container.

Tasmanian police thanked the campers for their swift action in stopping the accused.

Anyone with information has been asked to come forward.