Man, 27, pleads guilty to choking and stabbing murder of his girlfriend

‘Please don’t be dead, baby’: Man, 27, pleads guilty to choking and stabbing his girlfriend to death after taking a domestic violence prevention course

Soon after completing a domestic violence prevention course Russell Brian Wood grabbed his girlfriend in a chokehold before stabbing and killing her during a fight in Sydney.

Wood, 27, has pleaded guilty to the murder of Sarah Brown, 34, who was stabbed inside her home in Whalan in late September 2017.

Her daughter, Monique Walker, who was 18 at the time, told Wood’s sentence hearing in the New South Wales Supreme Court on Wednesday her ‘heart shattered into a million pieces’ when she lost her mum.

Russell Brian Wood pleaded guilty to the murder of his girlfriend Sarah Brown (pictured), 34, who was stabbed inside her home in Whalan in late September 2017

According to the agreed facts, Wood and Ms Brown were in an on-again, off-again relationship from 2015.

Eight months before her death, an AVO was taken out against Wood to protect Ms Brown, which was later breached.

‘He told police he had done a domestic violence course recently and that he did it because he wanted to get help and it was part of his good behaviour,’ the facts state.

Friends and family often noticed Ms Brown had black eyes and bruises and, once, she was hospitalised due to injuries inflicted by Wood.

‘The deceased also complained to friends and family that the offender would often put his hands around her throat,’ the facts state.

On the night of her murder, the pair went out together, and Wood later went to her house alone. When Ms Brown returned she told him to get out.

She pulled him out of bed and tried pushing him out.

Wood, who had Brazilian Jujitsu training, told police he grabbed her in a choker hold until she passed out.

He did not remember stabbing her and told police he would black out when drinking.

When police arrived he was curled up beside her with his head on her shoulder, holding a tea towel against her stomach, with a large kitchen knife nearby. 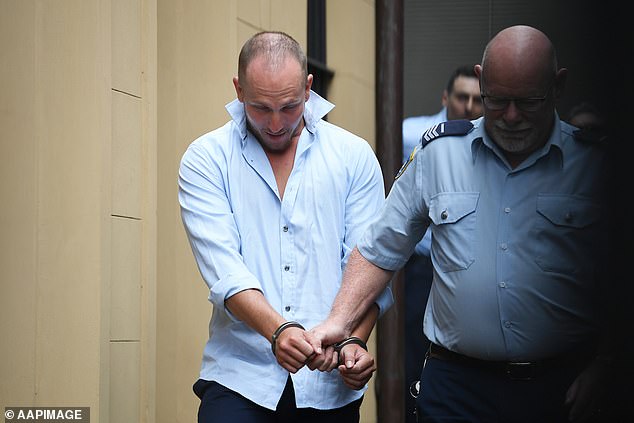 Ms Brown’s daughter described her mother as ‘full of life’ and a happy, loud and courageous person.

‘I didn’t want to believe something so cruel and senseless has happened to my mum,’ she said.

Wood will be sentenced on Friday.