Man, 30, fighting for life after being hit in the head with a brick at Sydney house party

Man, 30, is fighting for life after being hit in the head with a brick during a late night brawl at a house party

A 30-year-old man is in a coma fighting for his life after being hit in the head with a brick during a late night brawl at a house party.

He was found lying on the footpath with ‘significant head injuries’ outside of a share house in Brighton Le Sands, in Sydney’s south, at 12:30am on Saturday.

An out-of-control brawl had been reported to authorities, prompting the riot squad, police and paramedics to be sent in.

While the victim lay injured on the footpath, up to 15 men were inside the house when authorities arrived on the scene.

The victim suffered a fractured skull and was rushed to St George Hospital in a serious condition, where he remains in a coma.

A pool of blood, two shirts and loose bricks lay were a 30-year-old man was found with ‘significant head injuries’ outside of a share house in Brighton Le Sands, in Sydney’s south, at 12:30am on Saturday

Pictures of the party house on Saturday morning show there is a pool of blood on the pavement in front of the property.

Next to the blood on the front lawn are loose bricks, a knocked over brick fence and mailbox, two T-shirts and a Coles trolley lying on its side.

Police seized a brick from inside the house, which they believed was used to strike the man in the head.

There were chaotic scenes at the house the previous night, with emergency lights from police cars and ambulances flashing and a riot team present.

Neighbour Phil McCambridge was woken up by the noise and saw riot squad police first arriving on the scene to knock down doors inside the house.

‘They had the riot squad there and they brought out a battering ram. A little battering ram and they knocked down a door or two in the house,’ he told 9News.

The injured man was quickly treated by paramedics and rushed to hospital, according to the neighbours.

Men and women at the party were lined up in front of the house after emergency services arrived.

Seven men were taken to Hurstville and Kogarah Police Stations and are assisting police. They are not under arrest.

A NSW Police spokeswoman said the investigation is ongoing.

‘Inquiries are still continuing. No charges have been laid at this stage,’ the spokeswoman said. 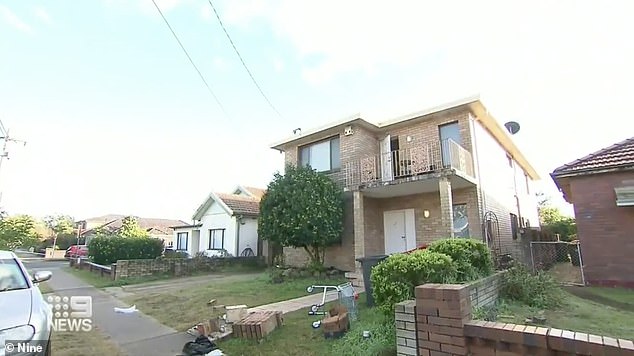 A knocked over brick fence, mailbox and a Coles trolley lying on its side are scattered in front of the house. A wild brawl was reported inside the house, prompting riot police to be sent in