Man, 34, is left in hospital after eating the world’s HOTTEST chilli

The unidentified man developed agonising symptoms after trying the ‘Carolina Reaper’ during a hot pepper-eating competition in the US.

The chilli was so powerful it made several arteries in his brain constrict, medics revealed – leaving him with ‘thunderclap headaches’.

Doctors in New York, who treated the patient, have today published the case in the prestigious BMJ Case Reports.

The Carolina Reaper, which supermarket giant Tesco stocked last summer, is so hot that people are supposed to wear gloves when they handle it.

It can come in at nearly 2.2 million on the Scoville scale, which is the measurement used to determine how much punch a chilli packs.

In comparison, a Jalapeno pepper typically rates between 2,500 to 5,000 units on the scale – around 400 times less than a Carolina Reaper.

The man immediately began dry heaving after sampling the chilli, the authors at Bassett Medical Center said in the paper.

Over the following days, he developed ‘intense’ neck pain and headaches, each of which lasted just a few seconds.

The pain was so severe that he sought emergency treatment and he was tested for multiple neurological conditions.

But the results all came back negative, medics led by Dr Kilothungan Gunasekaran wrote in the journal.

However, a CT scan showed several arteries in the man’s brain had constricted and he was diagnosed with reversible cerebral vasoconstriction syndrome (RCVS). 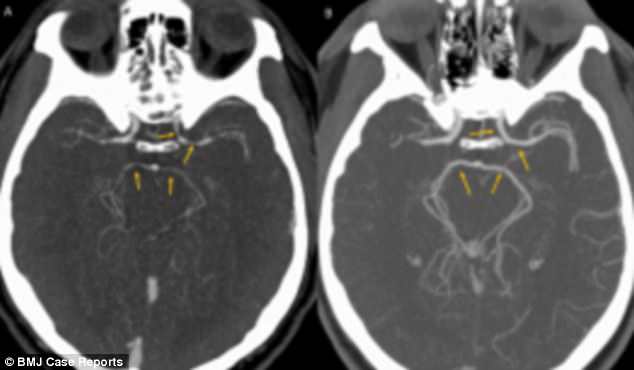 A CT scan showed several arteries in the man’s brain had constricted and he was diagnosed with reversible cerebral vasoconstriction syndrome (left, the man’s restricted arteries in his first CT scan, and right, a CT scan of the man five weeks later)

WHAT ARE THE 10 HOTTEST CHILLI PEPPERS IN THE WORLD?

The condition – a temporary artery narrowing often accompanied by ‘thunderclap’ headaches – can be caused by certain prescription medications or illegal drugs.

But the authors said that this is the first time it has been linked with eating chilli peppers.

The man’s symptoms cleared up on their own and a CT scan five weeks later showed his arteries had returned to their normal width.

In 2016, a British man, Mark McNeil, then 36, was hospitalised after eating chicken wings doused in a sauce containing Carolina Reaper chillis.

Mr McNeil only managed three before he was taken to the University Hospital of North Tees – although he was not reported as developing a brain condition.

He said: ‘The first wing went down okay, a bit tingling. I had another two and it was just overwhelming.

‘A burning sensation. I had loads of milk and ate loads of cucumbers, tomatoes, anything to dull the pain.

‘After about an hour and a half the pain was too much. I had to leave work early and go to hospital.

‘The staff were very professional but I could tell they were kind of joking as well when I told them.’

The Guinness World Record for the hottest chilli is currently held by The PuckerButt Pepper Company in South Carolina.

The firm produces the Smokin Ed’s ‘Carolina Reaper’, which rates at an average of 1,569,300 Scoville heat units.