Man, 48, subjected to tirade of homophobic abuse from pensioner on a bus

Man, 48, who was subjected to tirade of homophobic abuse from pensioner on a bus as he returned from Pride event responds by telling her: ‘We can all be who we want to be’

A man who was subjected to vile homophobic abuse by a woman as he travelled on a bus responded to her insults in an incredible way.

Christopher Burton, 48, was one of the thousands of people out celebrating at Manchester Pride in the city centre on Saturday.

After the parade when he was travelling back to his home in Collyhurst on the 76 bus a woman, who he believes was around 75 to 80-years old, began abusing him.

Christopher Burton, 48, (pictured) was out celebrating at Manchester Pride on Saturday. He was wearing a t-shirt that read ‘homophobic abuse is criminal’ across the front

But instead of meeting her abuse with aggression, Christopher told her: ‘We can all be who we want to be, especially today’.

Chris was wearing a t-shirt that read ‘homophobic abuse is criminal’ across the front.

He was also wearing red ribbons, which are a symbol of awareness and support for people living with HIV.

‘As soon as I sat there the woman was mumbling but rather loudly. I was just sat there minding my own business.

‘She launched a tirade towards me and me alone, calling me a f****g gay b****d and telling me that I should have been killed at birth.’

The incident was filmed by Karina Townsley, 32, who was travelling on the bus at the same time with her seven-year-old daughter.

The footage shows the woman start to abuse Christopher and she can be heard saying: ‘You are a man, you are the son of your father. Where is your father?’

The bus driver intervenes and asks the woman to calm down and mind her language, but Christopher said the abuse continued for at least five minutes. 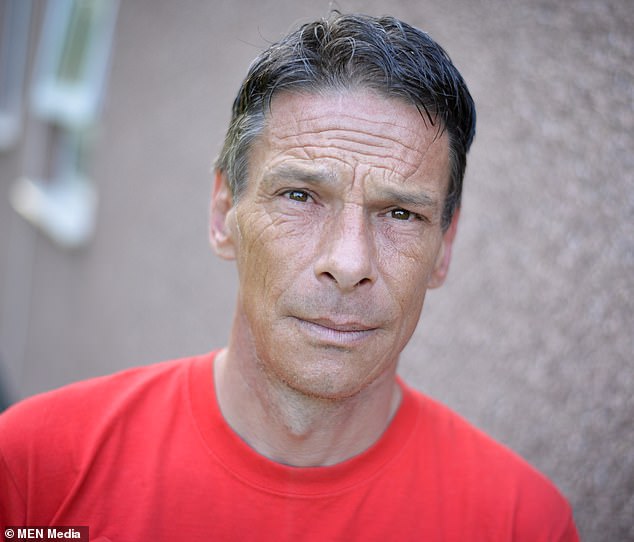 Instead of meeting her abuse with aggression, Christopher (pictured) told her: ‘We can all be who we want to be, especially today’

‘I tired to calm the situation down. I opened up my arms and told her there was no need for this at all.

‘Everybody on the bus was shocked and four or five people told her to stop’, Christopher said.

Despite being targeted by the woman, Christopher said he was more concerned for the other passengers on the bus.

He said: ‘I thought she was going to get violent. I was more concerned for the other people on the bus and a child that was on there.’ 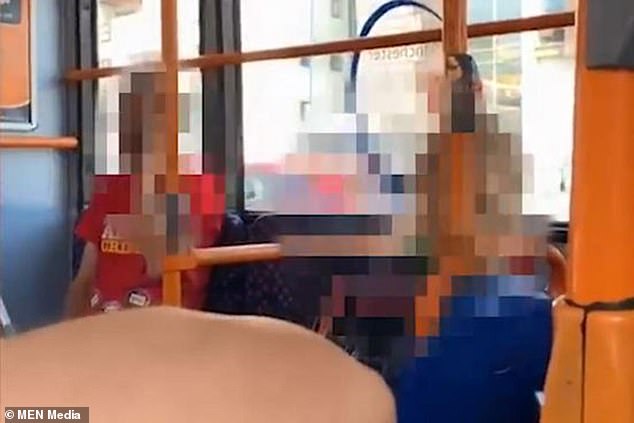 The incident was filmed by Karina Townsley, 32, who was travelling on the bus at the same time with her seven-year-old daughter. Christopher can be seen on the left in the red t-shirt

Christopher said he gets abused ‘regularly and often’ and understands that there are ‘different people and attitudes’.

But this incident left him feeling upset and he reported it to the police.

‘I just thought ‘why has she picked on me?’ I did absolutely nothing apart from board a bus. I’m still feeling upset about it.

‘Everybody in the city was celebrating that weekend, apart from one it seems.’

Greater Manchester Police have been contacted about the incident.