Man, 59, is charged with kidnapping woman for ‘sexual servitude’

Face-tattoo man, 59, is charged with kidnapping woman for ‘sexual servitude’ after she escaped his home by smashing through a garage door in an SUV, hitting a sheriff’s deputy

Eye-catching: Kevin Michael, from North Carolina, has been charged with kidnapping, forcible sexual offense and a slew of drug-related charges, accused of keeping a woman in ‘sexual servitude’

A North Carolina man with an eye-catching face tattoo has been arrested on a slew of charges, including kidnapping and sexual assault, after authorities say a woman he was holding captive in his home attempted to escape in an SUV.

According to the Davidson County Sheriff’s Office, the victim rammed the vehicle through the garage door on Kevin Michael’s property in Thomasville, and struck a deputy who had arrived at the scene in response to a call about a ‘disturbance’ early Tuesday morning.

When the woman driving the SUV refused to stop, the deputy opened fire and wounded her.

She was taken to a hospital suffering from gunshot wounds. Investigators say she will not face any charges for hitting the deputy, who was treated for non-life-threatening injuries and released.

Michael, 59, whose mugshot displays a massive tattoo in the middle of his forehead consisting of a winged eyeball, has been charged with counts of kidnapping, forcible sex offense, manufacturing crack cocaine, possession with intent to sell and distribute cocaine, manufacturing in a dwelling or place of business and possession of drug paraphernalia, reported The Dispatch.

The victim attempted to flee Michael’s home in Thomasville, North Carolina (pictured), on Tuesday by crashing an SUV through the garage door 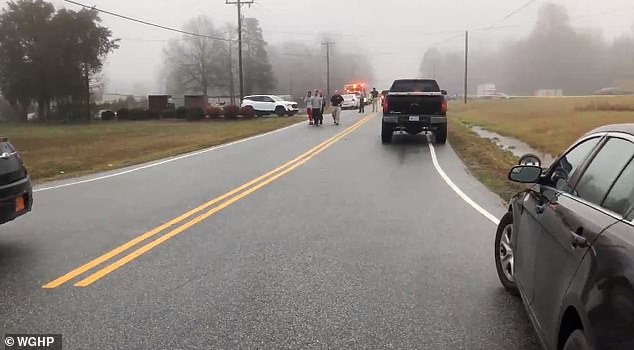 The victim struck a sheriff’s deputy standing outside and was shot and wounded after refusing to stop the vehicle, sheriff’s office says

Arrest warrants allege that Michael had abducted the victim to hold her in ‘sexual servitude’ against her will.

The twisted case began unfolding shortly before 8am on Tuesday, when deputies responded to Michael’s property at 152 Kanoy Road after deceiving a 911 call from a woman saying she was being ‘attacked.’ 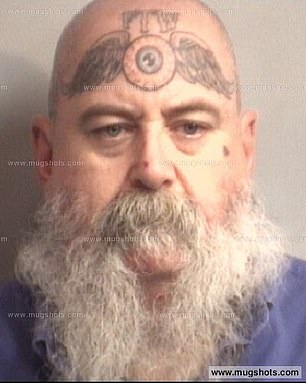 As deputies were trying to locate the caller, an SUV smashed through the garage door of the converted warehouse and hit a deputy who was standing in the parking lot, reported MyFox8.

The alleged victim of the kidnapping was alone inside the SUV and did not stop, prompting officers to shoot at her.

She was rushed to Wake Forest Medical Center, where her condition was listed as stable.

According to investigators, the woman was held against her will by Michael for an unknown of time and sexually assaulted on at least two occasions.

Records indicate that Michael has a lengthy criminal record, which includes charges of possession of methamphetamine with intent to see, possession of cocaine, a weapons charge and altering criminal evidence, to name a few.

The suspect is being held in the county jail on bonds totaling $1million. His next court date in the kidnapping case has been scheduled for March 9.