Man, 60, who was thrown in jail after being wrongfully arrested awarded £100,000 compensation

Man, 60, who was thrown in jail after being wrongfully arrested is awarded £100,000 compensation after the experience ‘trashed’ his life

A man who was wrongfully arrested and sent to prison while awaiting trial has been given £100,000 in compensation.

Gary Webb, from Gatehouse of Fleet in Dumfries and Galloway, Scotland, spent one night in police custody and three nights in prison in 2015.

The 60-year-old was later released after police officers realised they had arrested the wrong man – but he said that his life had been ‘trashed’ by the experience.

Gary Webb, (pictured) from Gatehouse of Fleet in Dumfries and Galloway, Scotland, spent one night in police custody and three nights in prison in 2015

Mr Webb, who has no criminal convictions, was arrested at his home by officers who had a warrant for a different person.

It is not clear what the charge was.

The former timber yard manager claims that he tried to prove that it was a case of mistaken identity by showing officers his passport, driving licence and photographs from around his home.

But he was put in handcuffs and escorted to the police station.

Speaking about the ordeal to The Sunday Post, Mr Webb said: ‘I was at home with my wife then being held in cuffs with no-one believing who I was and facing the worst kind of criminal charges imaginable.

‘I thought I was going insane. How could no-one believe I was me?’

Mr Webb was taken to court before then spending three nights on remand in a cell at Addiewell Prison in West Lothian – more than 100 miles away from his home.

He claims that he did not receive an explanation or apology by the officers even after he was eventually released.

Mr Webb made a formal complaint for wrongful arrest soon after but this was rejected after two years of deliberation and was instead attributed to a ‘quality of service issue’. 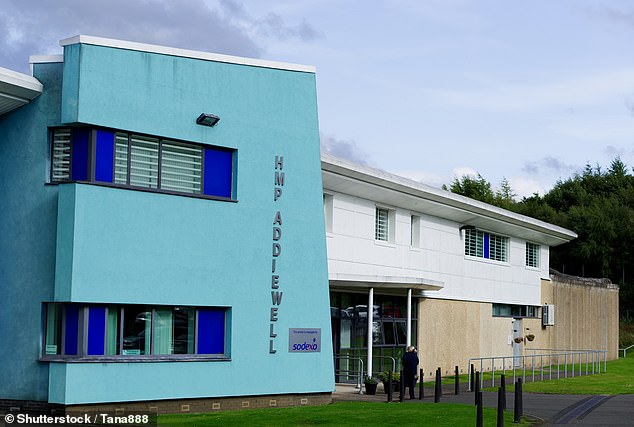 The 60-year-old was later released after police officers realised they had arrested the wrong man – but he said that his life had been ‘trashed’ by the experience. Pictured: HMP Addiewell

He went on to contact the Police Investigations and Review Commissioner who ordered that five officers who had been involved were arrested and reported over allegations of criminal neglect of duty and attempting to pervert the course of justice to the Crown Office.

But after a further two-year investigation it was decided that none of those involved would be prosecuted.

Three of the officers have now retired and it is unclear whether any have faced – or will face – disciplinary action.

It is now thought that one of the officers is in fact suing the Police Investigations and Review Commissioner over his arrest by investigators.

Mr Webb claims that he had to leave his job after his mental health deteriorated as a result of the arrest.

He has now been awarded £100,000 in compensation but said: ‘My life has been trashed after this. Completely trashed…

‘Police Scotland and its behaviour has been utterly despicable.

‘They clearly know of wrongdoing or they wouldn’t have paid damages.’